Executive compensation plans are meant to incentivize executives to increase performance on selected KPIs. Such target-setting in executive compensation has a broad range of consequences, both positive and negative. Depending on which behaviors are prioritized and rewarded, executives may act in ways that ensure short-term payouts for themselves, but that sacrifice firm value in the long term. That is, executives typically respond to incentives, but the response may be adverse.

Given the power of incentives to steer behavior, shareholders, stakeholders, as well as firms increasingly look to introduce new targets for their executives, particularly around ESG. Whilst incorporating ESG-criteria into compensation arrangements may help to direct executive’s attention to ESG-outcomes, such issues may prove misguided if firms select the wrong pay arrangements and targets for their business.  Indeed, as Khan et al. (2015) shows, focusing on ESG only raises firm value if the selected ESG-investments are material to the firm.

Against this backdrop, Reward Value and Diligent Institute have developed a research agenda to better understand the effects of ESG-targets on firm outcomes. Given the evidence on the relationship between pay and executive performance, the behavioral effects of targets, and concerns over the effectiveness of ESG-metrics and targets, it’s vital that we better understand exactly how (and which) ESG targets drive sustainable long-term value creation for different companies.

As a preliminary update for our larger research project, this brief charts the evolution and distribution of non-financial targets at a sample of firms based on Diligent’s Compensation and Governance Intelligence (CGI) data on executive compensation packages over the period 2010-2020. We focus on the compensation of Chief Executive Officers (CEOs) and report several key findings:

How many executives have non-financial targets in their pay plans? 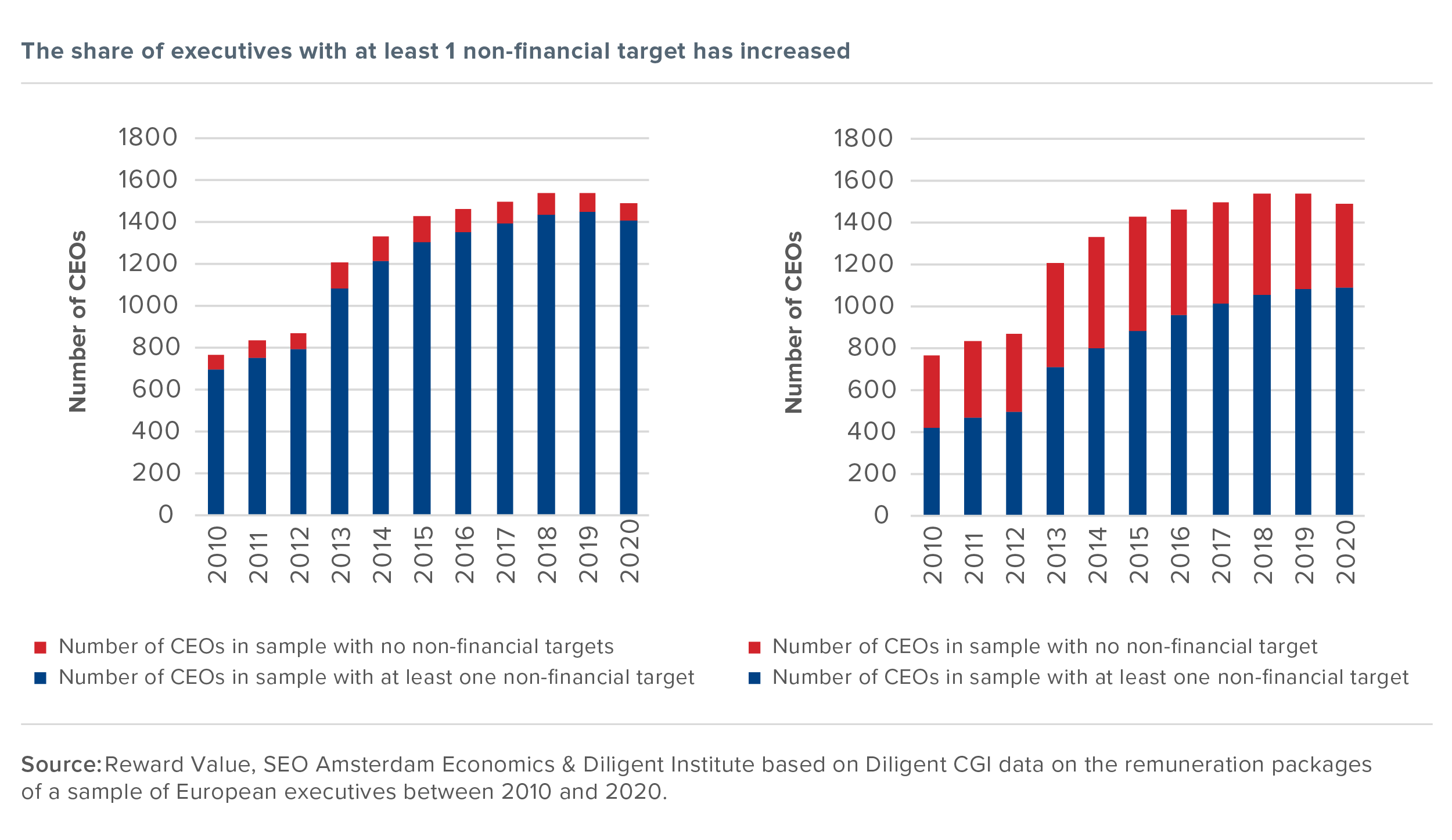 Are non-financial targets incorporated in short-term or long-term incentives?

The prevalence of the use of non-financial targets differs by firm characteristics. Here we illustrate two such characteristics, namely industry and (log) revenues. Figure 3 illustrates that in 2020, the share of CEOs with at least one financial target was highest in sectors such as Financial, Materials and Utilities, and lowest in industries Health Care, Information Technology and Consumer Staples. Differences between industries are fairly large, with the difference between the top industry (Financials) and the bottom industry (Health Care) being around 15 percentage points. 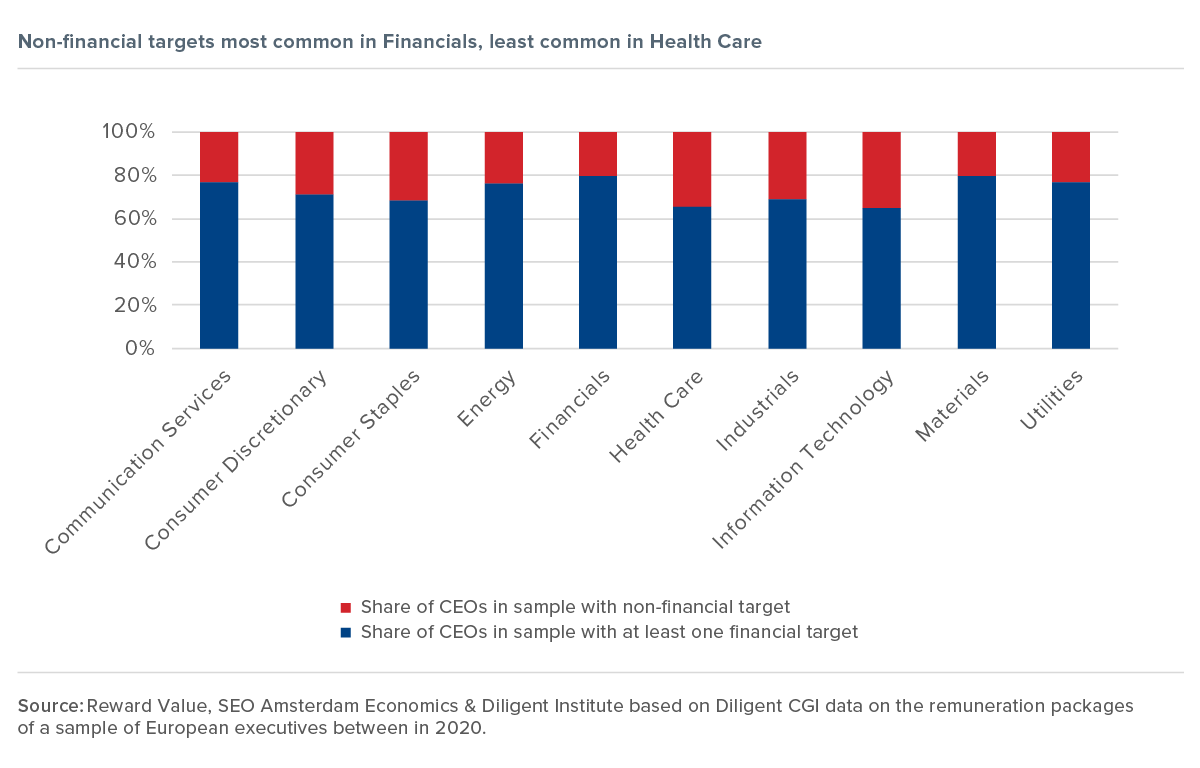 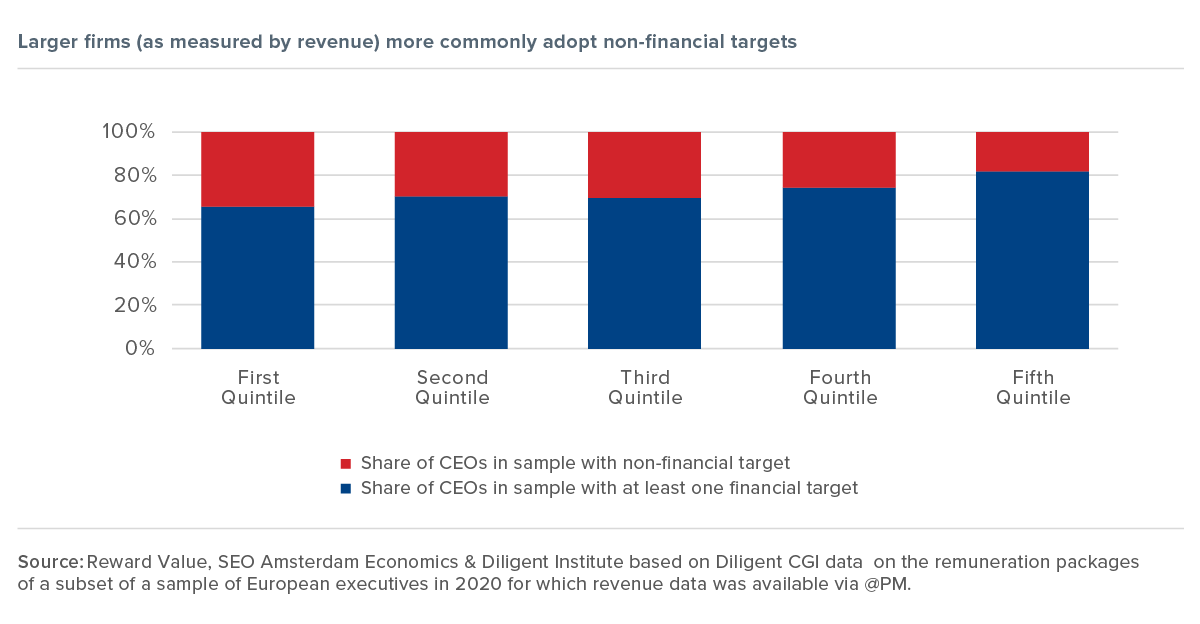 What do non-financial targets address?

In the introduction, we remarked that the efficacy of non-financial targets with respect to ESG may hinge on the outcomes that the targets address. As a preliminary investigation of the state-of-play, we manually classify targets for the year 2020 into three categories, namely targets focusing on business objectives, targets focusing on “ESG” objectives, and a residual category of Unknowns. Targets in the business category are objectives such as market share, operational excellence, and customer satisfaction. The ESG category includes issues such as sustainability, employee health and safety, and diversity and inclusion. The group of unknowns includes unattributable targets like ‘personal objectives’, ‘execution of strategy’ and ‘discretionary’, as well as composite targets that focus on a mixture of business and ESG objectives.

Based on this manual classification, Figure 5 highlights two main points.

First, for 62% of the STIs and 36% of the LTIs in our data for the year 2020 it is unclear whether non-financial targets in compensation packages target business objectives or ESG outcomes. Qualitatively, a significant part of this uncertainty is accounted for by the fact that firms do not disclose specific target objectives (i.e. target objectives being listed as ‘discretionary’ or ‘individual’). Such opacity may hinder shareholder and stakeholder monitoring of CEO compensation packages. Secondly, for targets that are classifiable as either focusing on business objectives or ESG goals it is the case that many focus on business objectives such as market share, operational excellence, and customer satisfaction. For targets associated with STIs, this even is the majority of cases. This means that the rise of non-financial targets documented in Figure 1 should not necessarily be equated with a rise of ESG-incentives. In total, of the classifiable targets in the STI 59% of those target business objectives. In the LTI, this share is 42%. 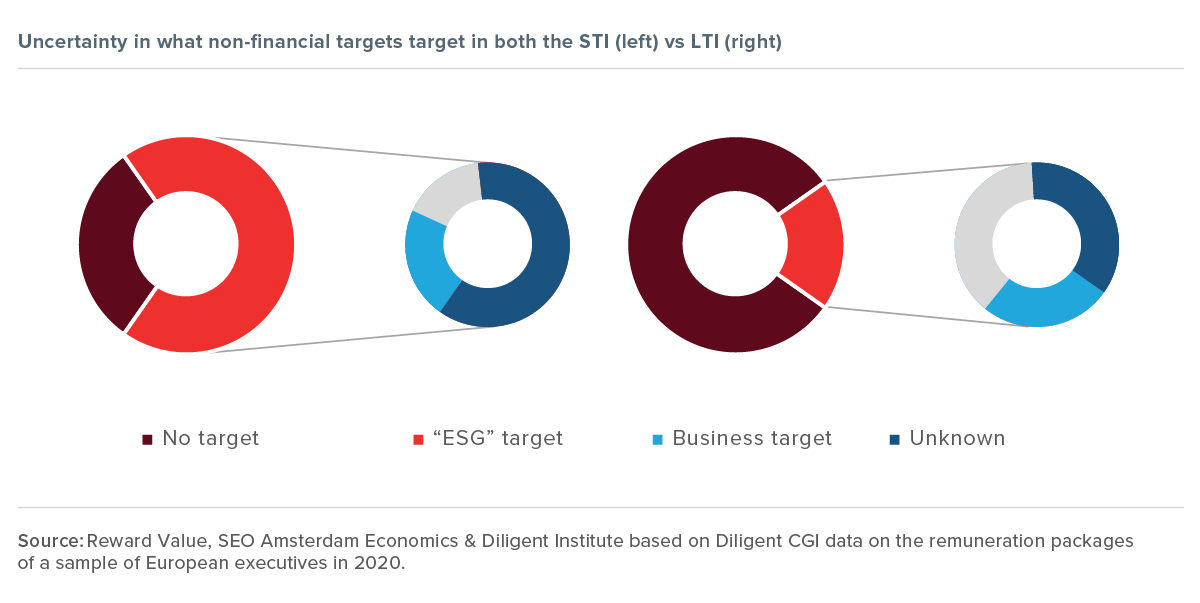 There is the continuous public debate on the inclusion of non-financial targets and KPIs in executive compensation leading to most countries addressing the issue. Remuneration policies and their structural design has been on the top agenda of investors and other stakeholders leading companies to develop internal strategies to point the business in a more sustainable direction. This note highlights that whilst firms have increasingly adopted non-financial targets, much uncertainty remains regarding the actual objectives addressed by such targets. We highlight that target objectives either are unclear or that care should be taken to avoid conflating the rise of non-financial targets with the rise of ESG targets. Regarding the latter, we remark that in the introduction we stressed the importance of the materiality of ESG-topics for firm outcomes but admit that we’ve abstracted from that issue in this brief. We’ll return to this issue in the future.

Reward Value is a non-profit research initiative established by Frederic Barge. Reward Value believes that current executive compensation practices no longer fit the societal context in which companies operate. Reward Value aims to – in cooperation with all stakeholders – contribute to a much-needed redesign of executive compensation practices. Executive remuneration has been a topic of hot debate for many years already. Academic research has shown several issues addressing the growing concerns with the developments of executive pay. In the public domain, also triggered by corporate scandals over the years, the discussion on executive remuneration has mainly been driven by emotions. With the widely embraced understanding of the need for a regenerative and distributive economy in support of a safe, healthy and sustainable planet and society, more and more companies are expressing their contributory role in well-phrased purpose statements. The purpose statements are further detailed in the strategies of firms, but often it becomes less dominant in the performance measurement and evaluation, and even less visible in the design and execution of executive remuneration policies. For Reward Value, responsible remuneration is the key to the responsible economy. It is not the sole driver, but it is a catalyst. Executive behavior is driven by intrinsic and extrinsic motivation. Intrinsic motivation is driven by personal conviction and culture. The nomination committees of boards need to ensure the right selection of leaders in support of the corporate culture. The extrinsic motivation is mainly structured by incentives. If executives are paid for (mainly) short-term financial performance, long-term sustainable value creation for stakeholders, including shareholders, can be negatively affected. The alignment of purpose, performance and pay is therefore a key contributor to the change for good.