Over the course of the last two years, boardrooms have faced intense pressure to increase the diversity of their ranks. Much of the available data suggests that slow progress is being made in this regard. However, among companies in the United States, the United Kingdom, Australia, and Germany, we have discovered a lack of Asian representation in the boardroom.

During our Modern Governance Summit (MGS) global event this year, renowned economist and speaker Dr. Dambisa Moyo, author of “How Boards Work: And How They Can Work Better in a Chaotic World,” touched on this discrepancy: “If you look at the world population, a significant proportion is from countries such as China and India, yet these are the minority in most boardrooms in the West. This means that corporations could be missing out on the representation of about half their consumers, which could translate to their sales and revenues.” Lacking directors of Asian nationality could mean that corporations could miss out on the demographic needs of half of their consumer base. All aspects of diversity such as age, gender, skills, race, and ethnicity matter to get the advantages of multiple perspectives in the boardroom. However, gender and skill sets have until recently taken center stage in the diversity discussion, relegating other elements of diversity like race, ethnicity, and nationality to the background. Utilizing Diligent’s compensation and Governance intel, we did an analysis on the representation of directors from several Asian nations, including China, Indonesia, India, Singapore, and Malaysia, to see how well they are represented in the boardrooms of the world’s largest companies in the US., the UK, Australia, and Germany.

The Majority of Companies have no Asian Representation 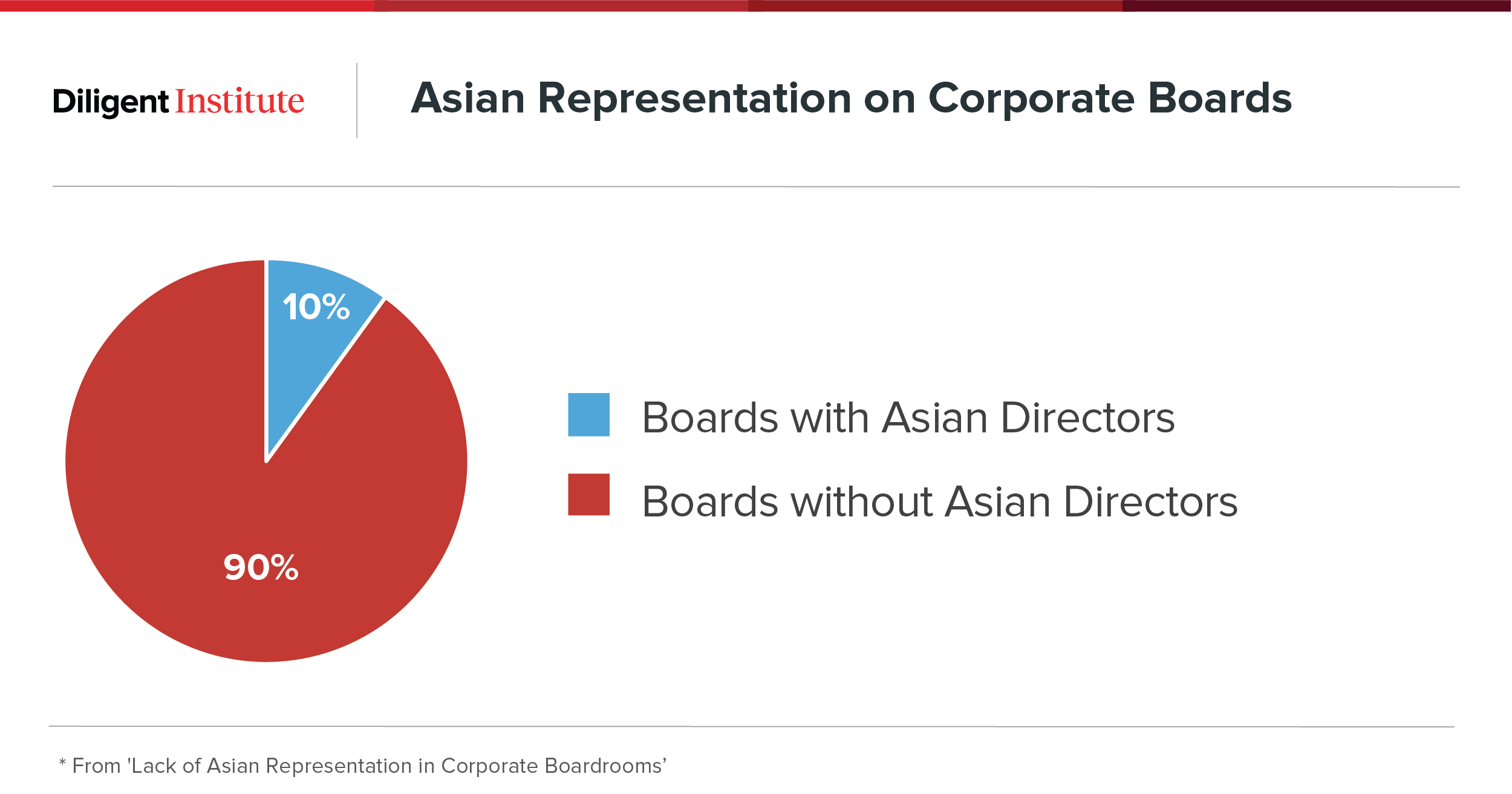 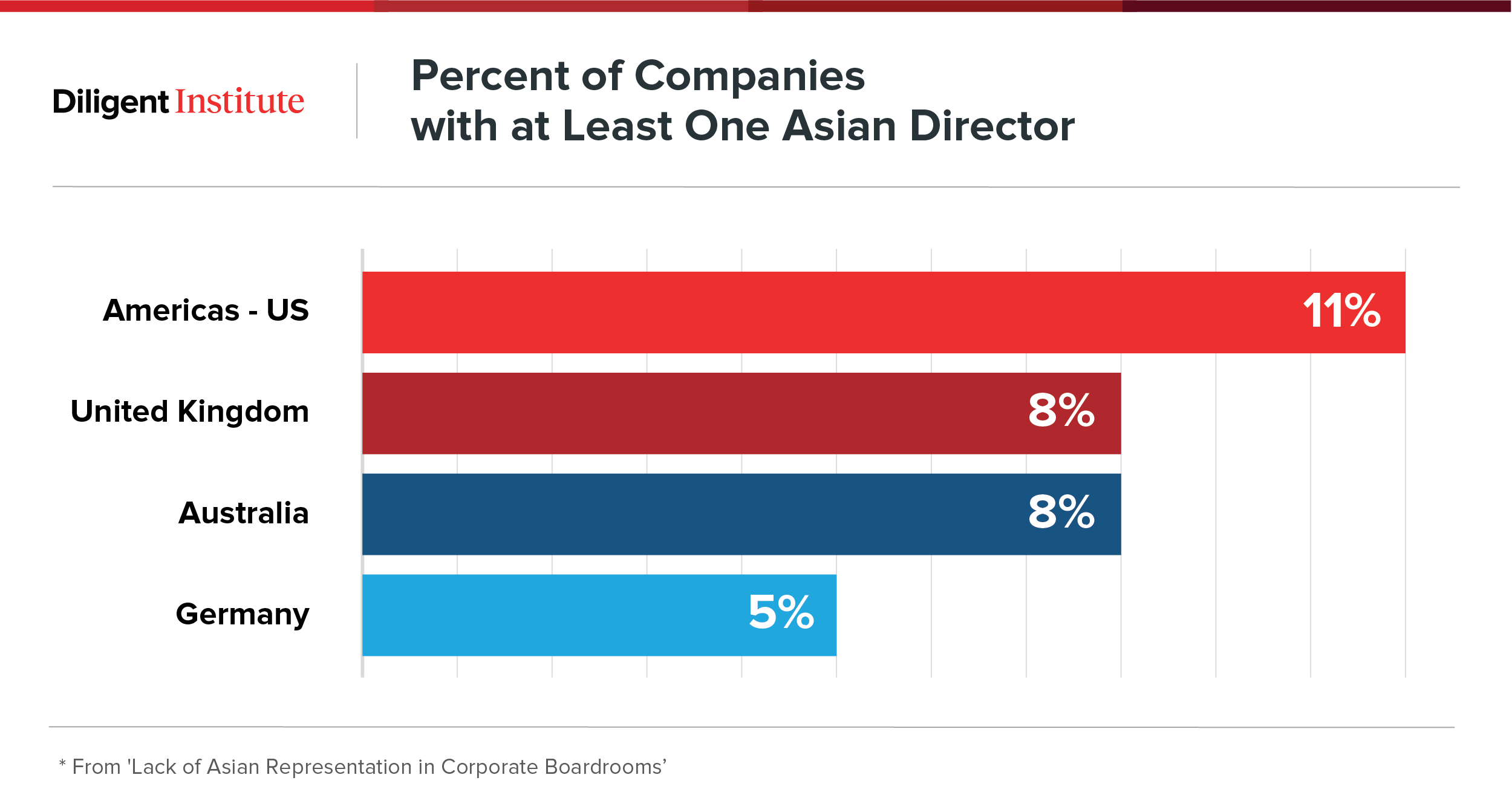 The findings suggest that on average, around 90% of companies in Australia, the US, the UK, and Germany have no directors with Asian nationalities. Approximately 11% of US companies have at least one Asian director, compared to 8% in both Australia and the United Kingdom. 95% of German boards had no Asian directors on their boards.

In the West, US Leads with Highest Appointment of Directors with Asian Nationalities, But Numbers are Low 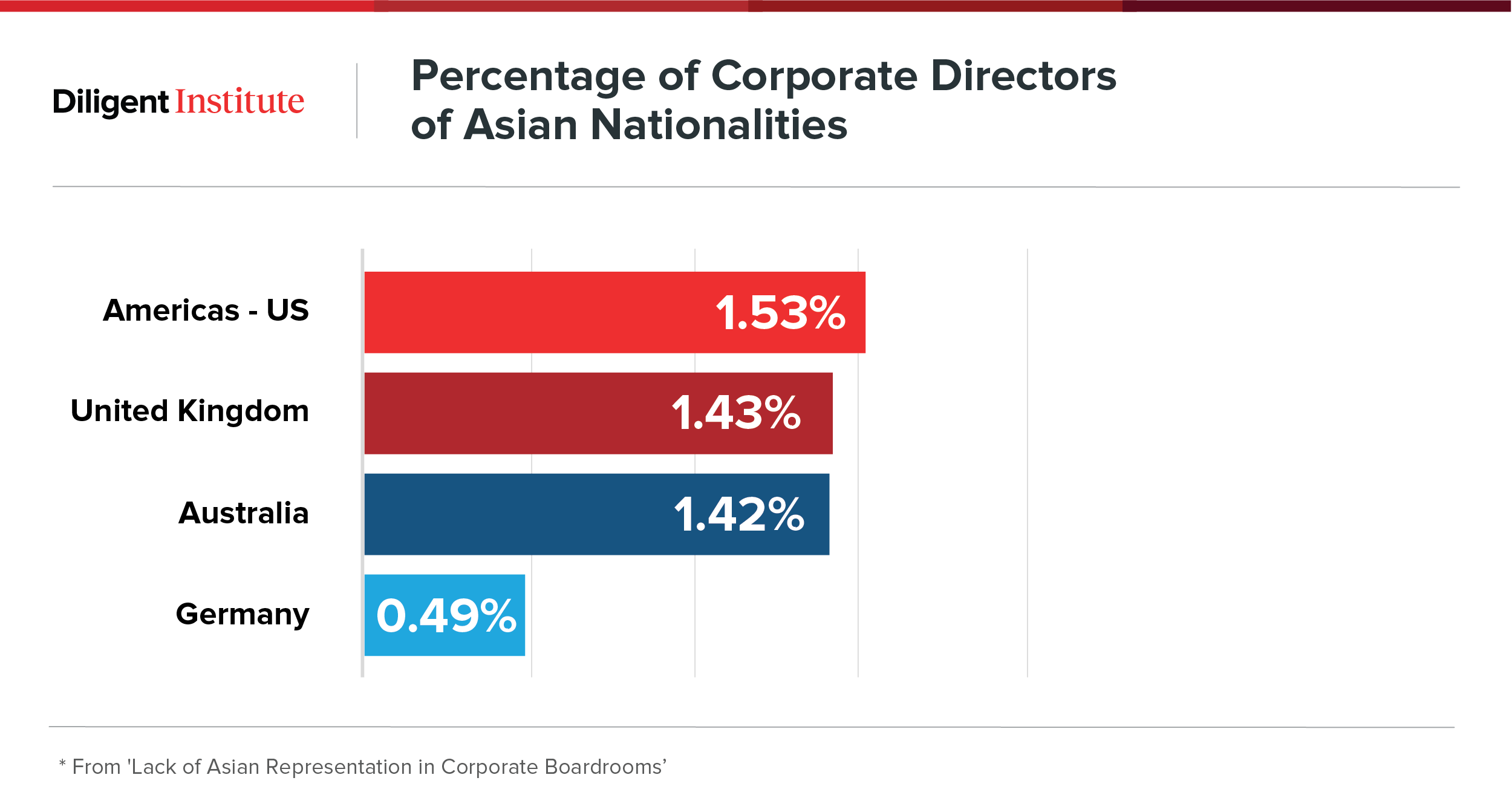 The findings suggest that the country with the highest percentage of Asian directors is the United States. Out of all the board members in the United States, 1.53% are from China, India, Singapore, Malaysia, and Indonesia. Comparatively, the UK has approximately 1.43% of directors from these Asian countries, compared to 1.42% in Australia and 0.5% in Germany.

For the United Kingdom (UK), this is very interesting given that it has been the blueprint for corporate governance standards for other jurisdictions for many years. The United Kingdom has one of the strictest voluntary gender diversity targets in Europe. The Confederation of Business Industries in the UK in 2020 announced that FTSE 100 companies and by extension the FTSE 250 companies must have a clear target in achieving racial diversity by having at least one black, Asian, or minority ethnic (BAME) member on their boards by 2021. Perhaps these steps will improve the representation of Asian directors in UK Boardrooms. 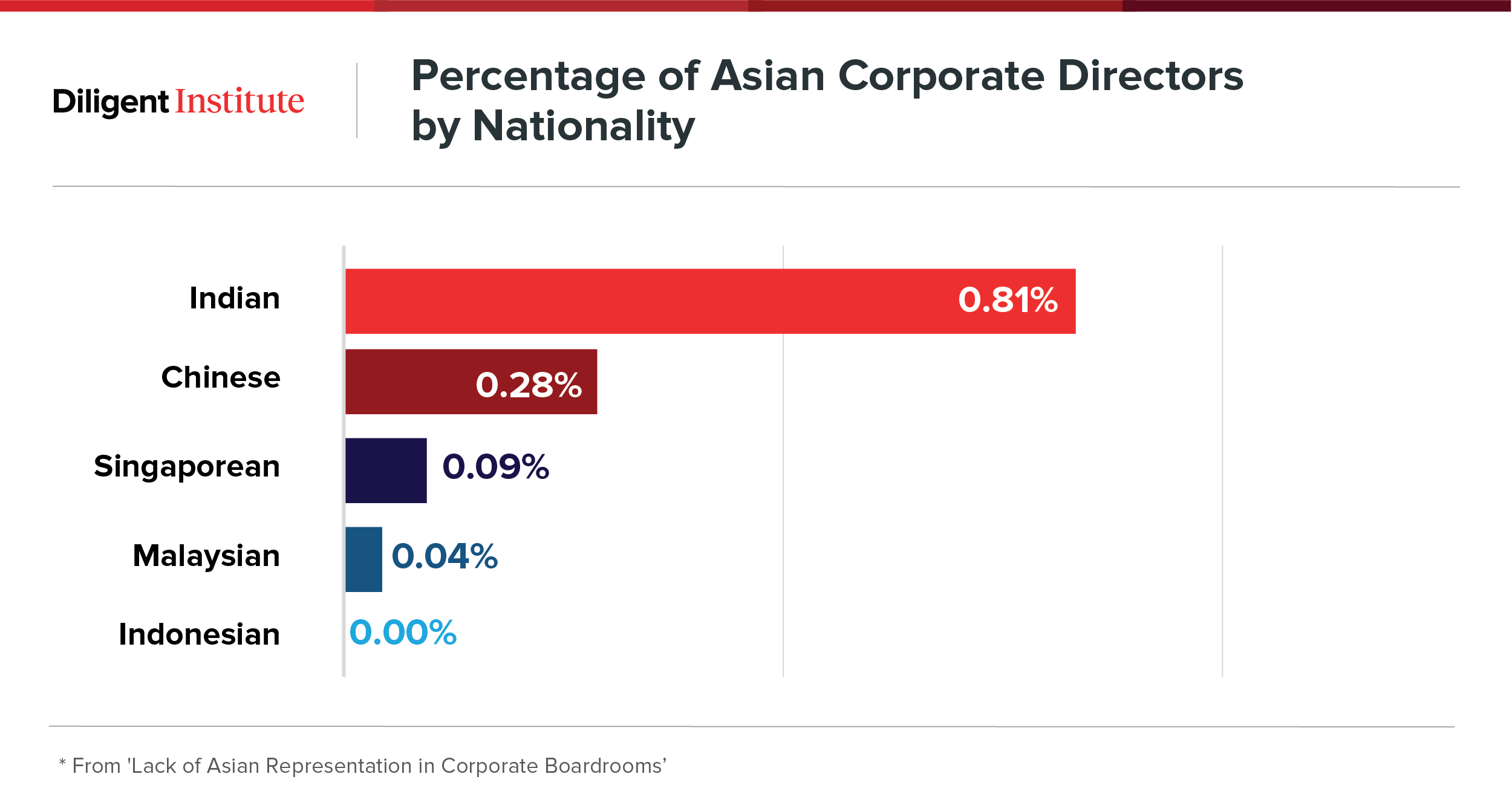 In the Asian countries we used for the sample analysis, the findings suggest that Indian directors make up the majority of Asian nationals in board rooms in Australia, the United States, the United Kingdom, and Germany. Directors with Indian nationalities occupy approximately 0.81% of the Boardrooms of these countries compared to only about 0.28% of Chinese nationalities.

Information Technology Sector Has the Most Directors with Asian Nationalities 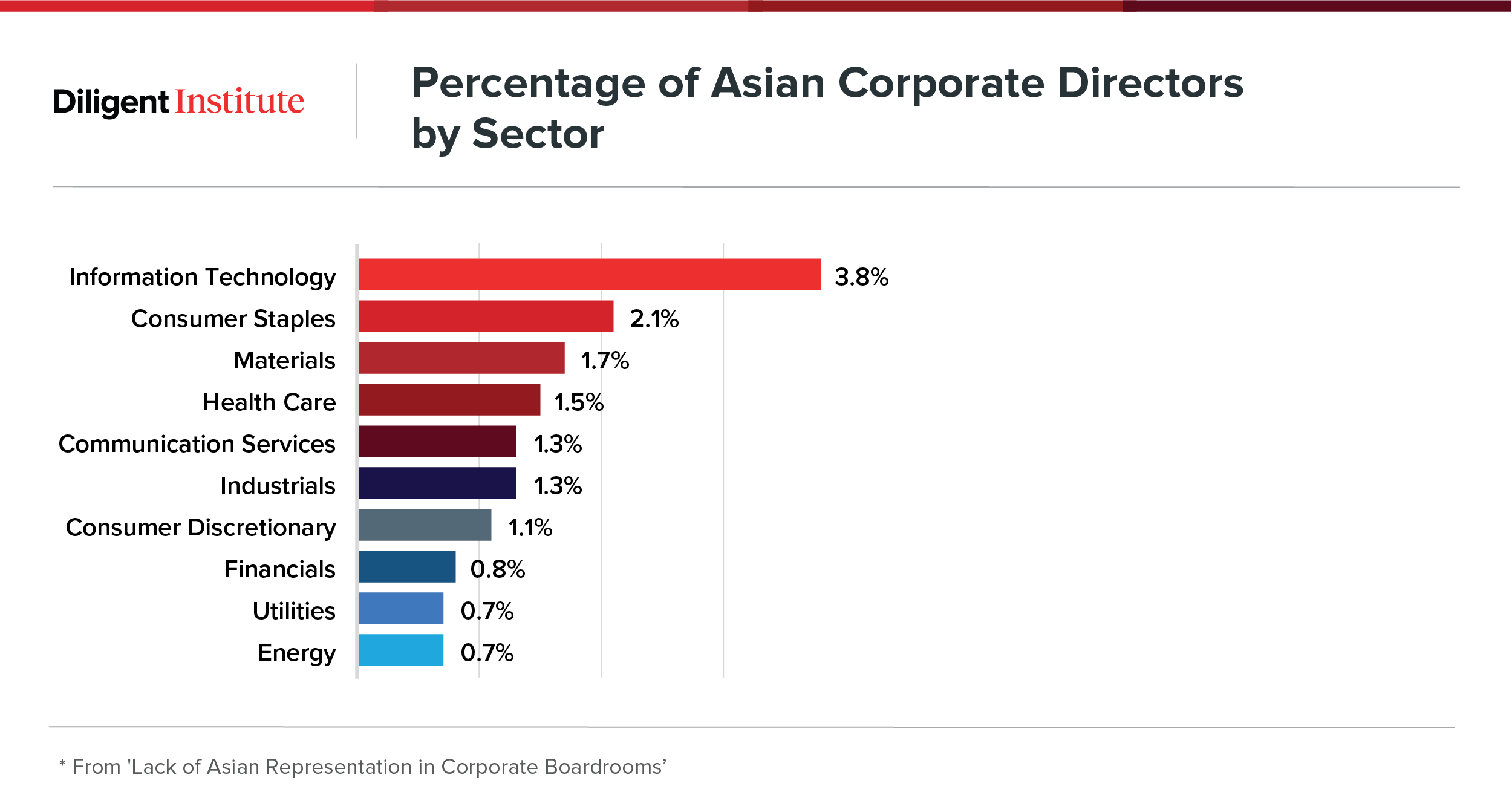 Nearly 4% of information technology board seats in the UK, Australia, Germany, and the US are held by Asian directors

Utilizing Diligent’s compensation and Governance intel, the data suggests that information technology has the highest representation of Asian directors at approximately 3.8% of board members. This is perhaps unsurprising given that the IT sector has a considerable client base in Asia. Comparatively, the Energy sector has the lowest representation of directors with Asian nationalities. Less than 1% of Energy boardrooms in our sample are held by Asian directors. 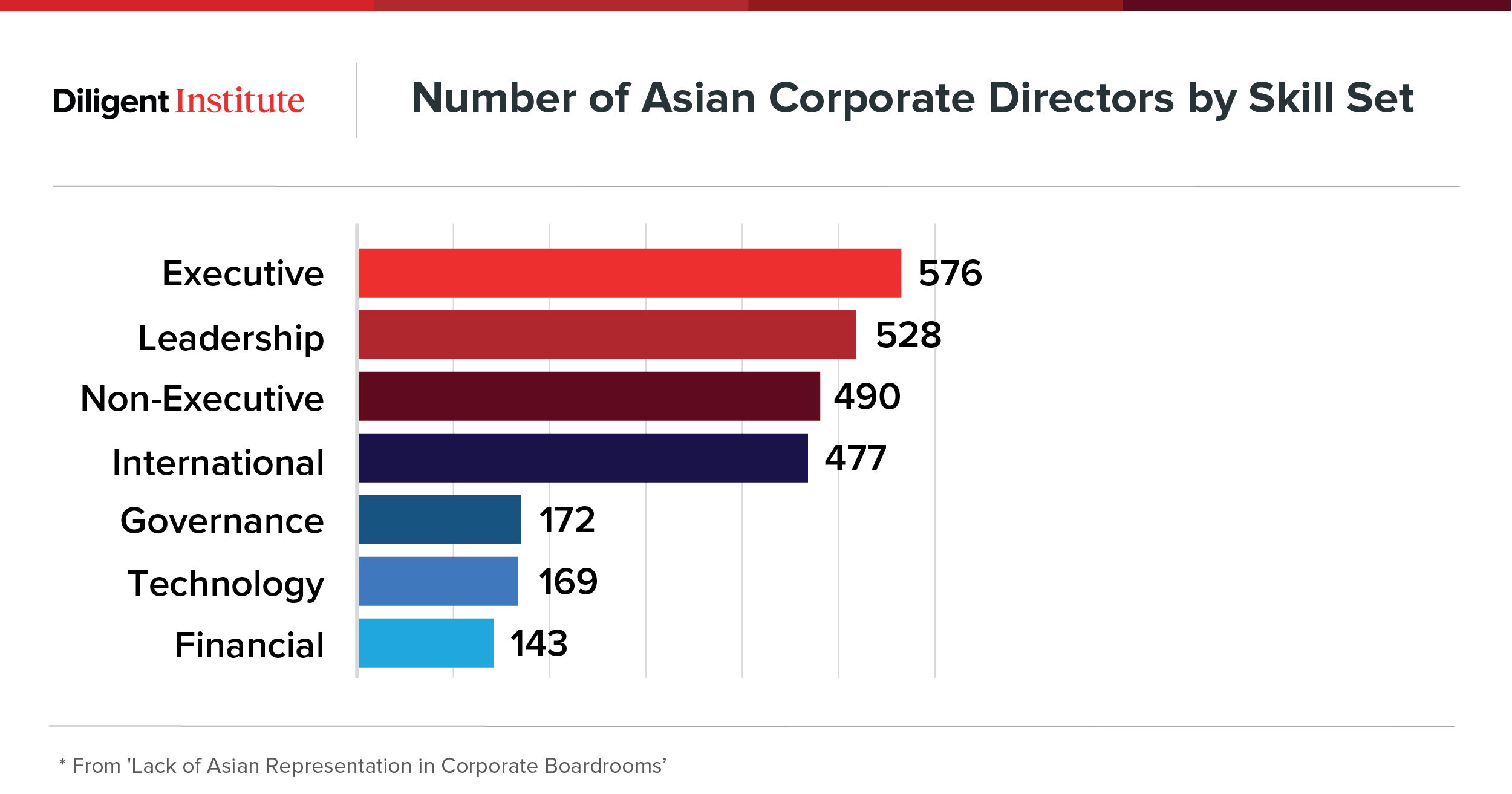 Though the data does not elucidate why these trends are happening, it shows that there is still a lot of work to be done in improving racial and ethnic diversity in the boardroom. These countries contain some of the most premium indices in the world, making the lack of Asian representation and perspectives in these companies’ boardrooms concerning. The absence of Asian nationalities in these boardrooms could jeopardize their ability to create new relations across the world and entry into many robust or emerging markets. In a globalized society and international business environment, we must ask why American and European companies are not including the perspectives of half the world’s population in the boardroom.

Commenting on these findings, Dr. Dambisa Moyo said, “This represents some very interesting findings. With the business climate that we are in, diverse backgrounds and skillsets are more important than ever. It is incredible for us to see that despite the mass population of Asian countries, they are not well represented in corporate boardrooms.”

Economies are continually growing and evolving with an accompanying diverse customer base and as such corporations should incorporate modern governance that represents their target markets.  Diversity does not end at gender but also includes variables such as race, ethnicity, sexual orientation, religion, professional, and expertise. This helps corporations to navigate the complex decision-making that they are faced with. Apart from diversity being a source of strength, a rich diverse Board can lead to an improved corporate culture and corporate growth.

The nomination committee should expand their scope of the search by looking beyond their so-called “old boys’ club” and be roomy in their recruitment of new non-executive Directors. There is a little fallacy that the reason for limited progress in diversifying board racially especially is lack of qualified candidates. However, the entrant pool is there, and that it’s up to boards to find it. Sometimes, moving below the C-Suite level could open the pool of candidates to fill up the Board seats.

Regulation could also be a tool to improve racial diversity. The BAME target in the UK is a step in the right direction and perhaps the time has come for other jurisdictions to also follow suit.