The Rise of Blockchain Digital Assets

The market for blockchain digital assets (BCDAs) like cryptocurrencies, non-fungible tokens (NFTs) and more began in 2009 with the creation of Bitcoin, the first publicly used method of trade that encompassed decentralized control, user privacy, blockchain-based record keeping and built-in scarcity. In 2012, WordPress then became the first large retailer to accept Bitcoin in payment, followed shortly thereafter by Expedia, Microsoft and Tesla, among others.

In the last few years in particular, BCDAs have leapt into the spotlight. Entire countries, such as El Salvador and the Central African Republic, have approved crypto as legal currency. Big names in the business world have cited their fondness for crypto, with the most notable example perhaps being Elon Musk, who purchased US $1.5 billion in Bitcoin in 2021. Meanwhile, there is a growing movement around the world for employees to be able to invest in cryptocurrencies as part of their 401(k) plans, opening companies up to a litany of risks.

As BCDAs become more mainstream, both to business and to society as a whole, the Diligent Institute and the Silicon Valley Directors’ Exchange (SVDX) were interested in better understanding how directors were thinking about them as they pertain to their roles and responsibilities in the boardroom. We surveyed 187 public and private company directors globally to learn more about how well directors understand BCDAs and whether or not directors believe they will be important to strategy now and in the future.

Our survey shed light on the following questions:

In an effort to learn more about how directors were thinking about BCDAs and incorporating them into company strategy, we surveyed 232 corporate leaders from May 3 to May 19, 2022, spanning both public and private companies across a variety of industry groups. In this report, we analyze the responses we received from 187 corporate directors. About 60% of our director respondents represent public companies, with the remaining 40% representing private companies. About 60% of our respondents represent companies based in the United States, with 40% representing companies located in other regions around the world. The survey was promoted globally to Diligent and SVDX contacts. A full demographic breakdown can be found in the Appendix. 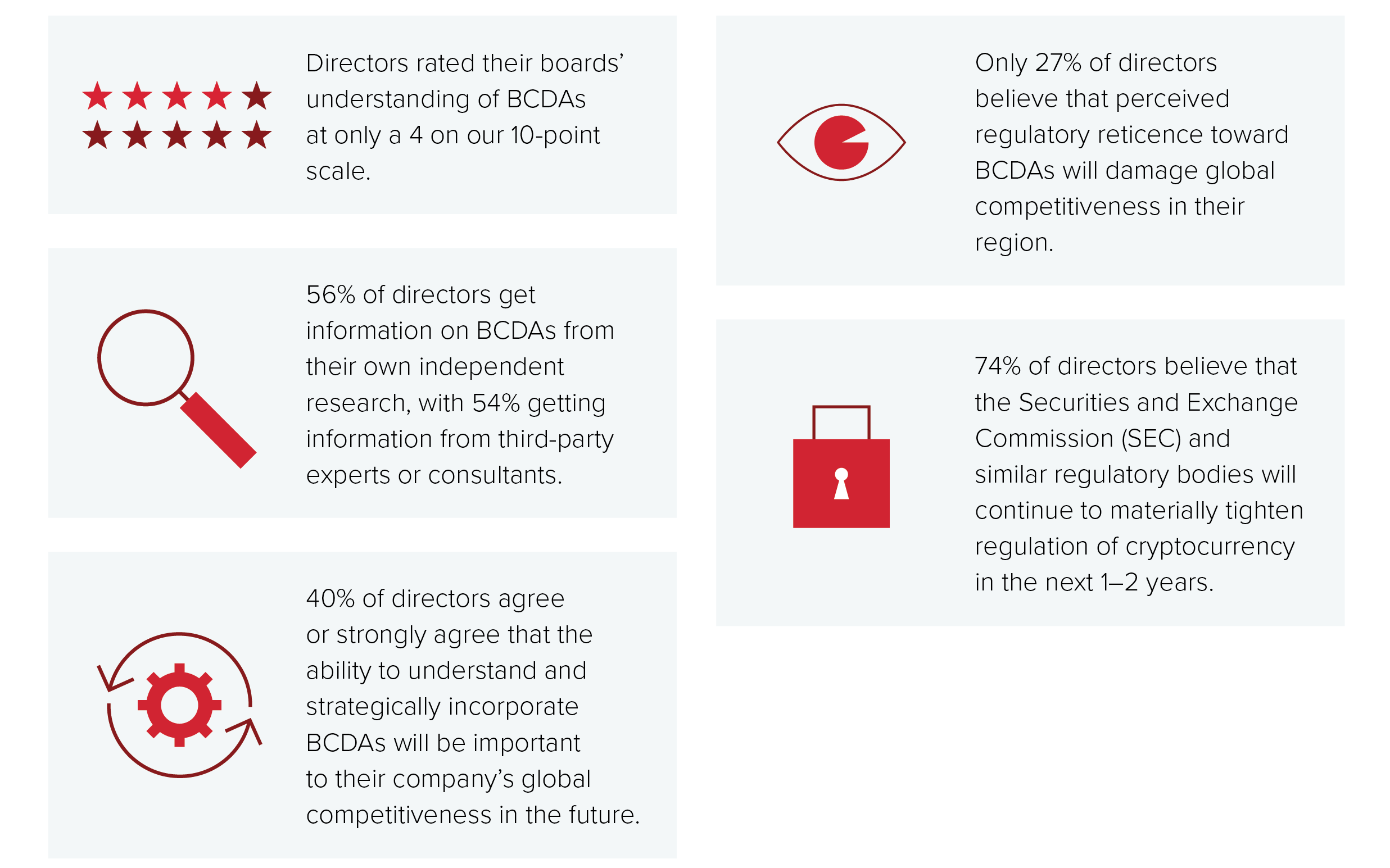 As a niche, complex and ever-changing area of digital innovation, we wanted to learn more about whether directors felt they understood BCDAs and where they were getting their information from.

For comparison, the Diligent Institute asked a similar question in a May 2022 report, Sustainability in the Spotlight: Board ESG Oversight and Strategy, conducted in partnership with Spencer Stuart. On that survey, directors rate their boards’ ESG competency and fluency at a 7 on our 10-point scale.

In the comments section, directors expand on this lack of understanding. One public company director based in the United States who prefers to remain anonymous notes that BCDAs are, “Not well understood. The benefits are not clear. We will likely not use them in the foreseeable future.” This director rates their board’s understanding of BCDAs at a 2.

“The survey results point to an awareness on the part of directors that there is yet a lot to learn and understand about blockchain digital asset implications. That is the good news. More challenging is the need for a clearer consistent source of helpful information (strategic and practical) for directors on this topic moving forward.”
-Daniel Siciliano, Chairman of SVDX

Where Do Directors Get Information on BCDAs?

According to the survey results, most directors (56%) are getting their information on BCDAs from their own independent research. Third-party experts or consultants came in a close second at 54%. 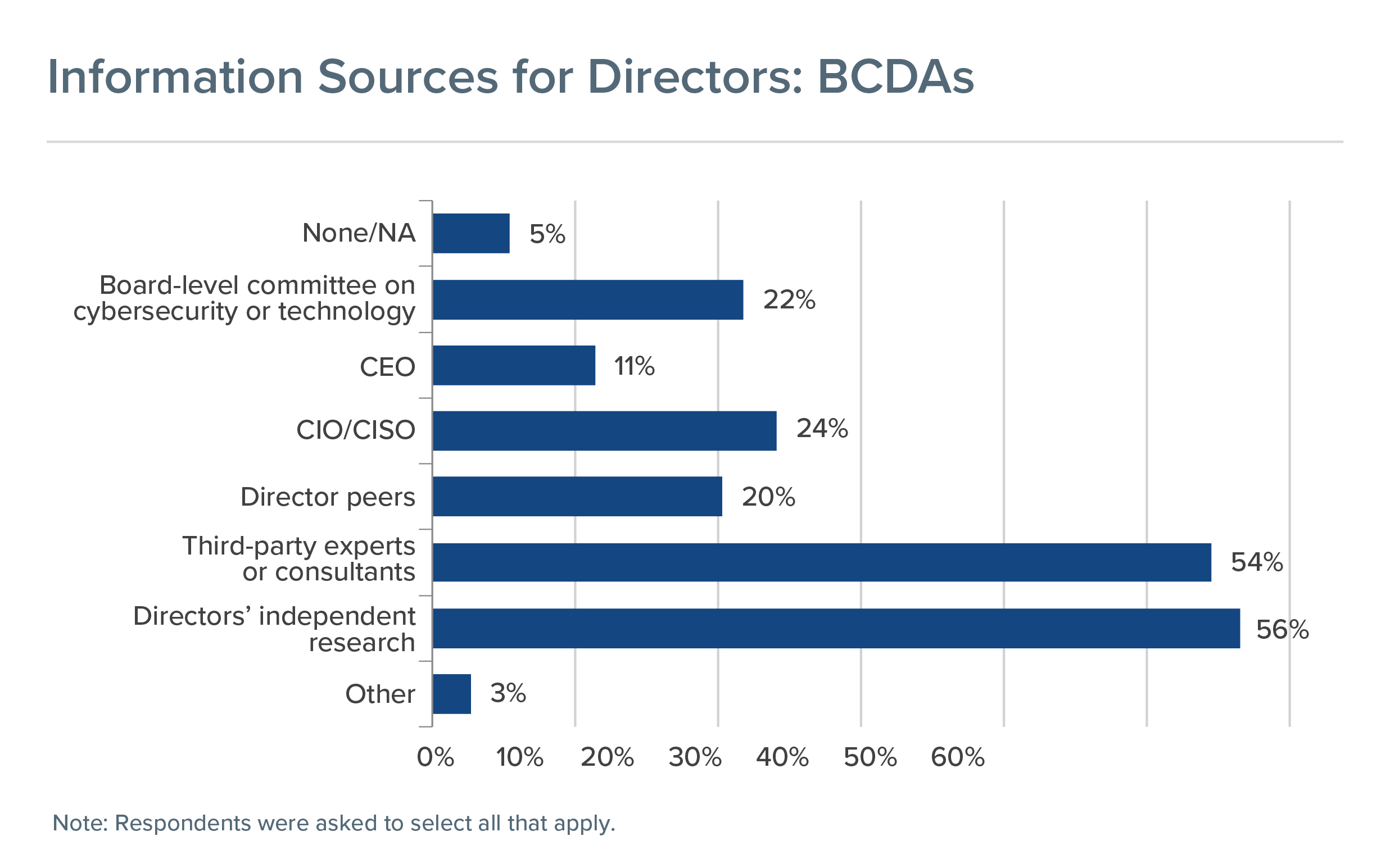 BCDAs as a Driver of Corporate Strategy

Beyond understanding the pros and cons of BCDAs, we also wanted to see whether directors were incorporating them as part of their organization’s overarching digital strategy or business strategy.

Do Directors Believe BCDAs Are Relevant to Strategy?

In the survey, respondents were asked to rate their level of agreement with the following statement: “The ability to understand and strategically incorporate benefits related to BCDAs will be important to my company’s global competitiveness in the future.” 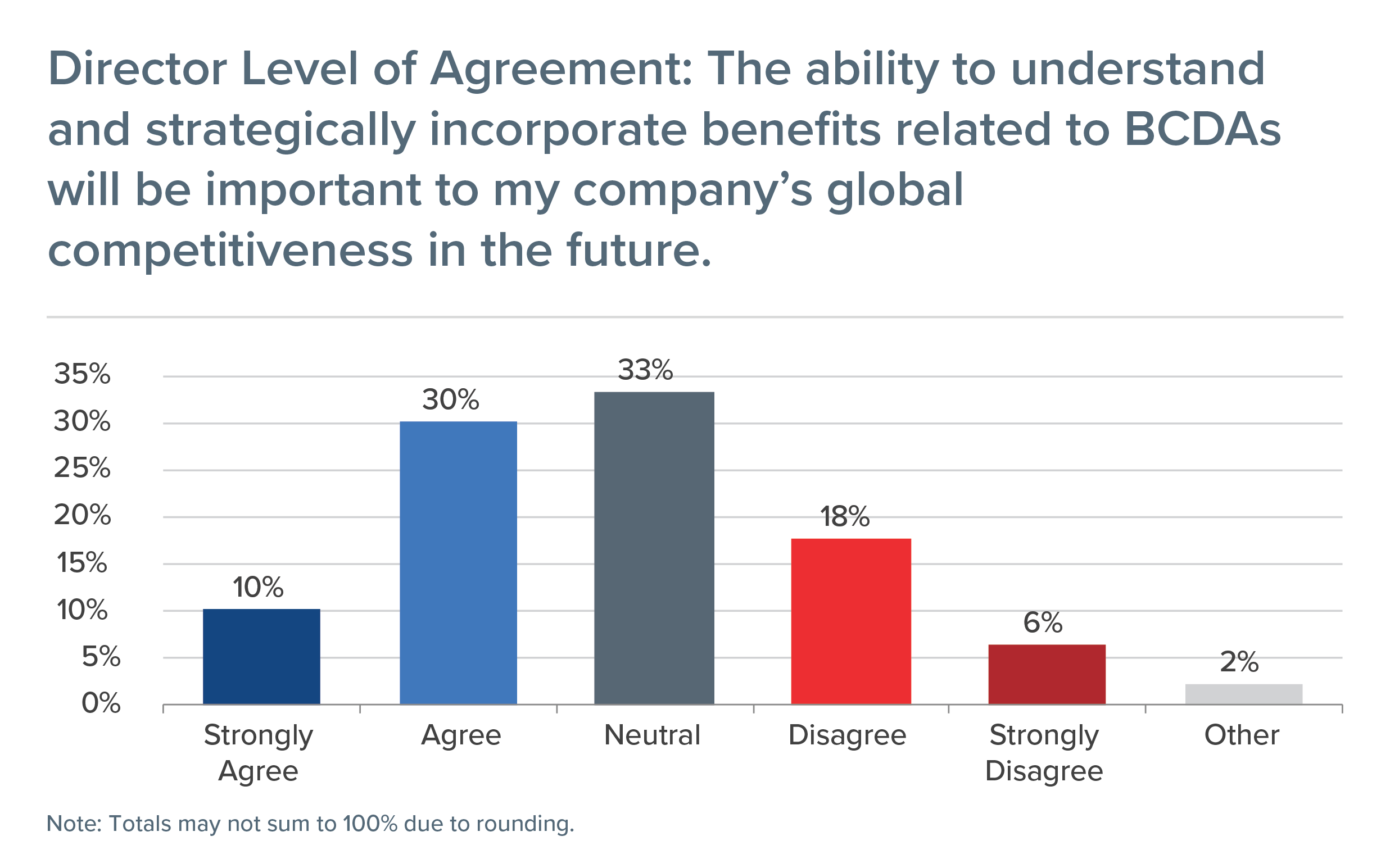 Most directors neither agree nor disagree, with the most popular option being “Neutral,” at 33%. However, nearly another third (30%) agree, with 10% strongly agreeing. Meanwhile, 18% disagree, with another 6% strongly disagreeing with the idea that BCDAs will be important for strategic success in the future. Some directors provide context in the comments section: “Ignore at your own peril,” writes Mukeeta Jhaveri, a non-executive director based in India.

Fergus Murphy, a non-executive director based in the U.K., agrees, writing, “[I] think they are here to stay and must be incorporated/accommodated into core strategy.”

On the other hand, many also point out the risks involved in incorporating BCDAs into business strategy: “The recurring theft of digital assets makes [my organization] reluctant to embrace them at this point,” notes Kevin Howell, a private company committee chairman based in the U.S.

A private company board chair based in the U.K. who prefers to remain anonymous adds, “Unless the security improves dramatically, these assets will continue to be very risky.”

“Blockchain-based digital assets have risen on the radars of boards over the last few years, as digital currencies are adopted into mainstream B2B payment flows and central banks across the world. These results tell us that despite the turbulence of the industry, 40% of boards believe understanding digital assets like crypto, including its risks and benefits, will be important to their organization’s competitiveness in the future.”
-Dottie Schindlinger, Executive Director of the Diligent Institute

Has the Strategic Importance of BCDAs Changed in 2022?

Since the beginning of the year, the way we think about cybersecurity, in particular digital assets, has been impacted by increasingly unstable geopolitical environments, including Russia’s invasion of Ukraine. We asked directors whether the importance of BCDAs to their organizations’ strategy has changed from the beginning of 2022 to now.

One private company respondent located in the U.S. who wishes to remain anonymous states simply, “We thought they would have had a greater impact by now but [they] have not.” 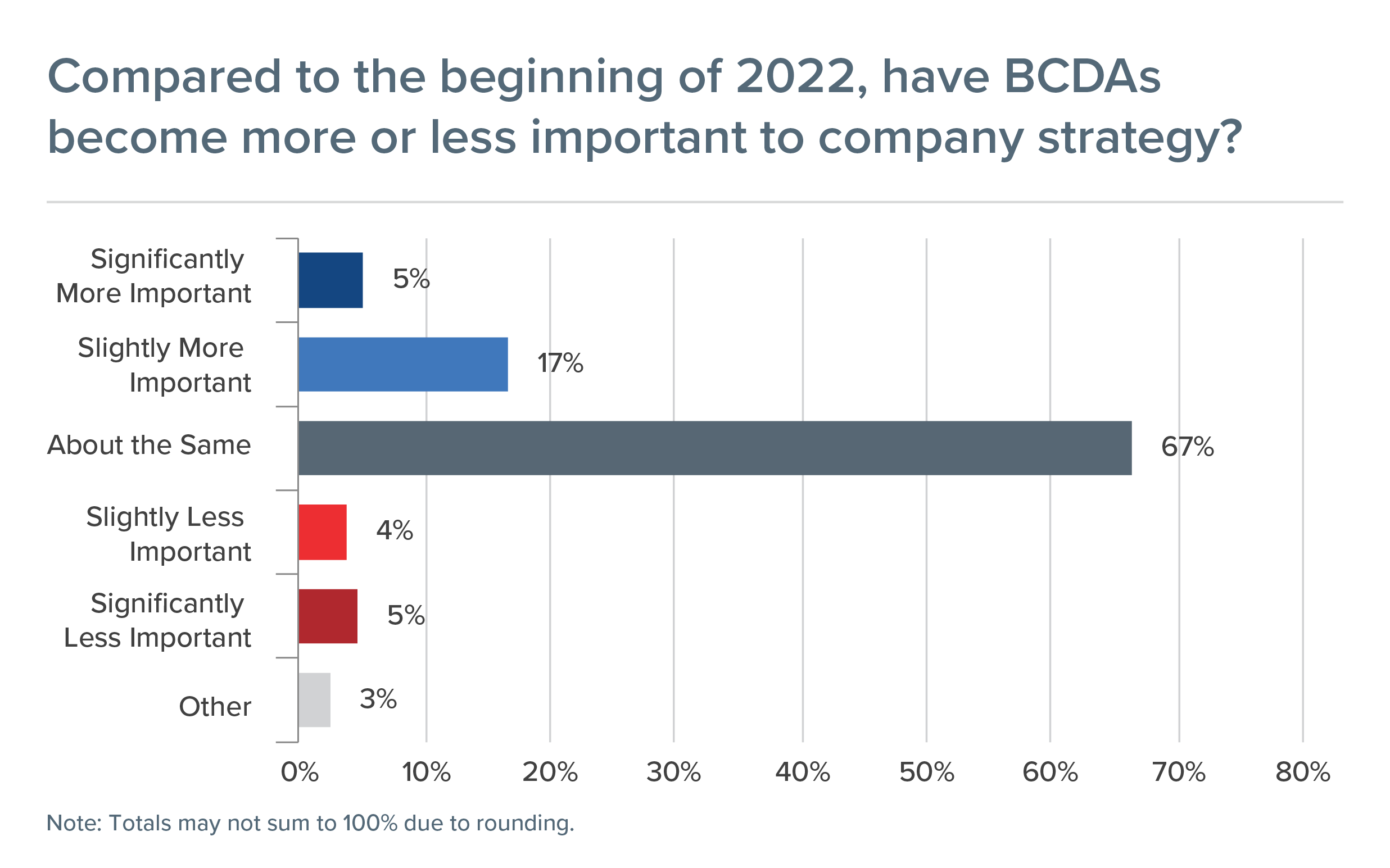 In an increasingly globalized society where different jurisdictions have taken varied approaches to regulating cryptocurrency and other BCDAs, what do directors believe is next from the regulatory side?

We asked respondents to indicate what regulatory action they believe would be taken with regard to BCDAs in the next 1–2 years. Respondents were asked to answer based on the regulatory bodies in their company headquarters’ geographic location.

Nearly three-quarters (74%) of directors believe that regulatory bodies will continue to materially tighten regulation of cryptocurrency and other BCDAs over the next two years, the most commonly chosen option by a large margin. Meanwhile, only 5% of respondents believe that restrictions and regulations will become looser in the same time period.

A public company director in the U.S. who prefers to remain anonymous notes that, “The biggest threat to the adoption of cryptocurrency is the usage by bad actors. Regulations [are] critical to bring cryptocurrency to the same level of trust as existing currency system[s].” 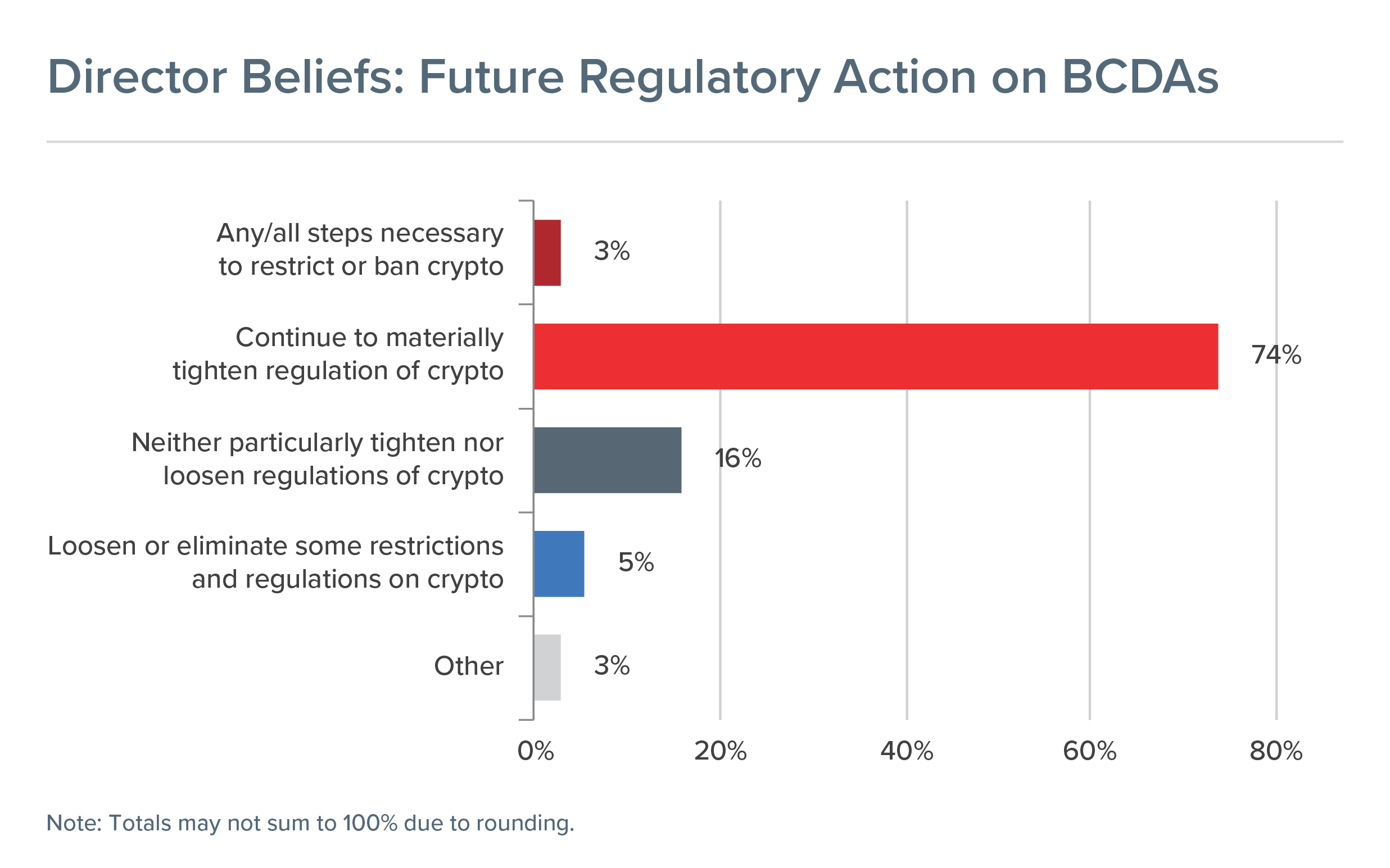 As regulatory bodies begin acting around BCDAs, do directors believe this will harm global competitiveness? We asked directors to rate their level of agreement with the following statement: “Regulatory reticence (or, in some cases, perceived hostility) toward BCDAs and cryptocurrency is likely to damage global competitiveness.” Directors were asked to answer based on the region in which their company is headquartered. 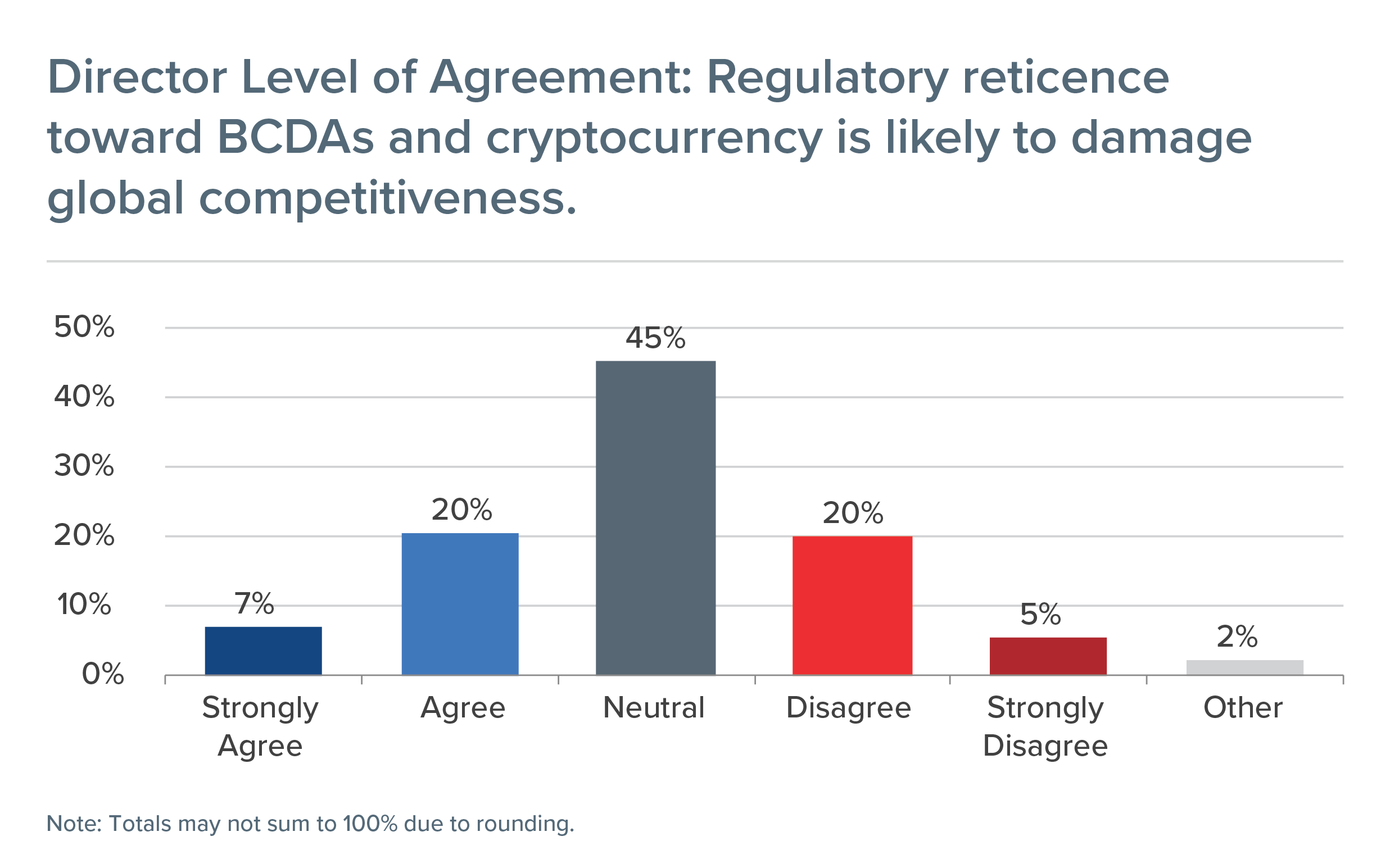 The plurality of directors (45%) feels neutrally. Meanwhile, equal percentages of respondents agree and disagree, at 20% apiece.

Alison Davis, a public company chair based in the U.S., provides more context on her view: “Fully blockchain-enabled digital assets and digital payments are a critical component of the next generation of our digital economy and will reap major improvements in many areas where our current outdated, insecure and inefficient infrastructure is no longer fit-for-purpose. This will affect every industry and society. If the US does not lean in faster on this topic, we will lose significant competitive advantage, value and societal impact benefits relative to other countries. Many legacy industry companies have a lot to gain or lose by understanding how their business model is impacted by a blockchain enabled Web3 economy and most boards, regulators, politicians, and corporate leaders have a long way to go to get up to speed.”

Do Directors Believe Cryptocurrency Should Be Afforded More Protections?

We asked our respondents whether they believe that validated or audited stablecoins tied to traditional currency (USD, for example) should be afforded the same consumer protections, such as Federal Deposit Insurance Corporation (FDIC) deposit insurance. 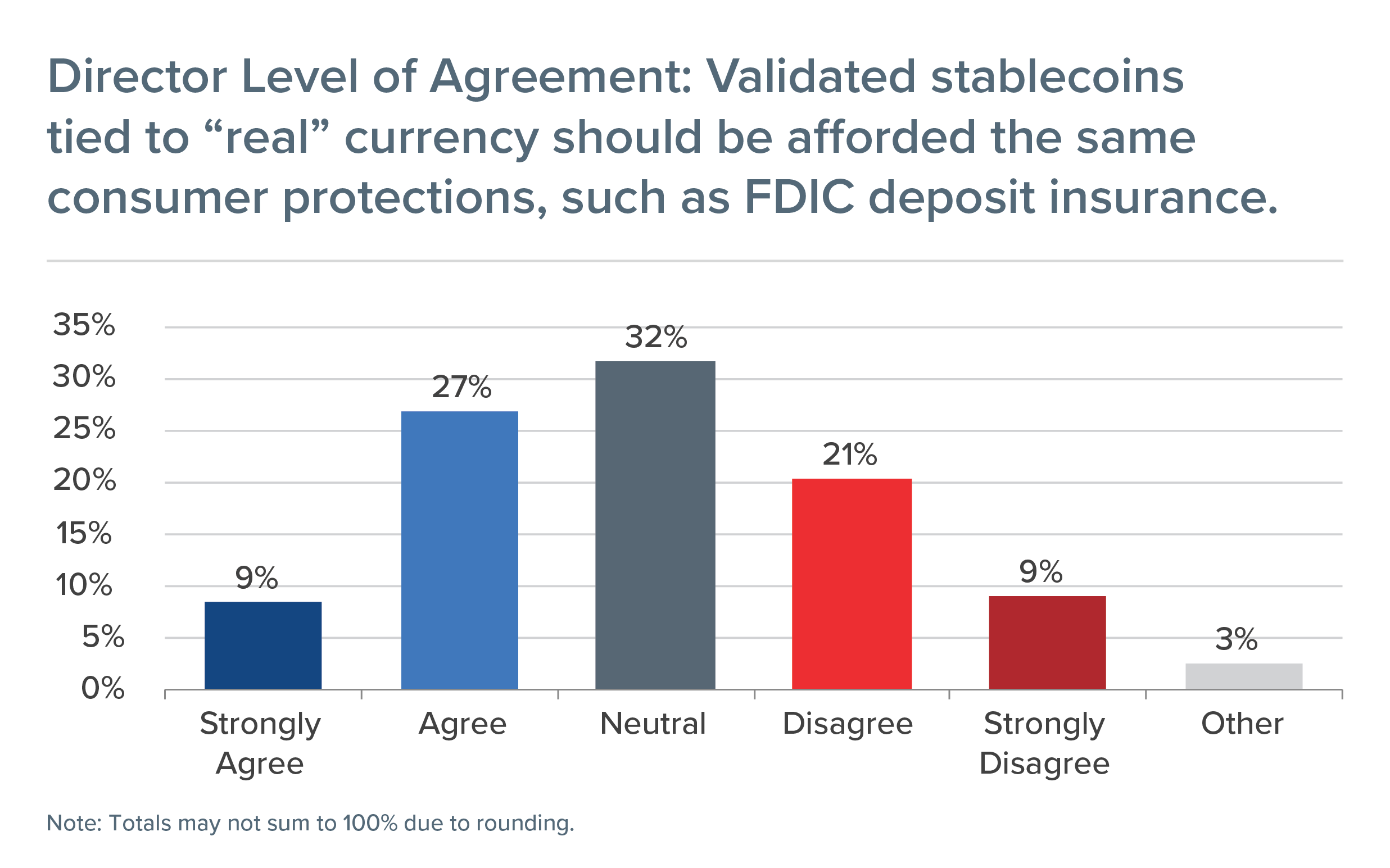 Again, the plurality of directors is neutral in this regard, at 32%. Another 27% agree that validated stablecoins tied to traditional currency should enjoy the same consumer protections, with 21% disagreeing. 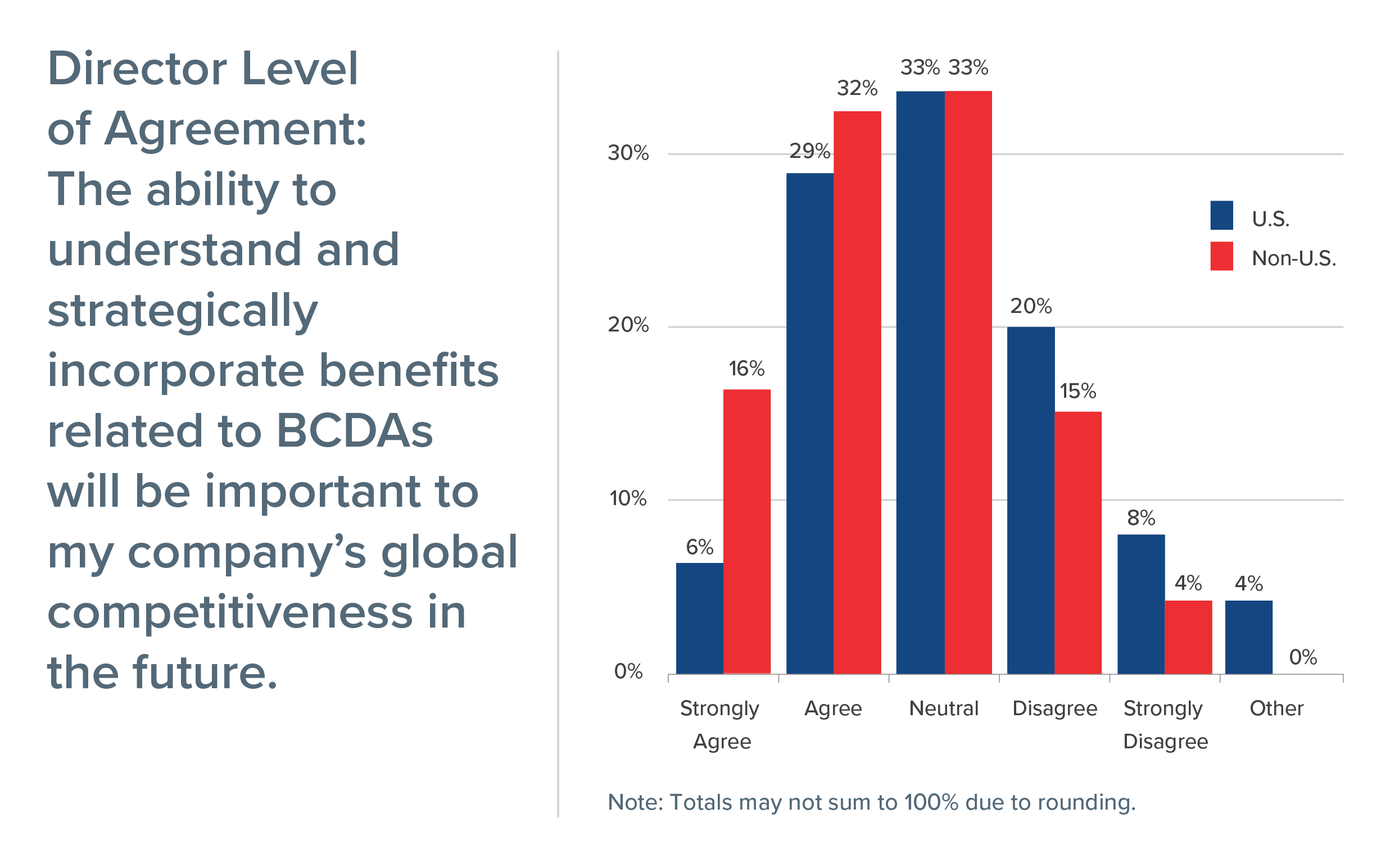 Strategic Importance of BCDAs Has Increased for Non-U.S. Directors in 2022 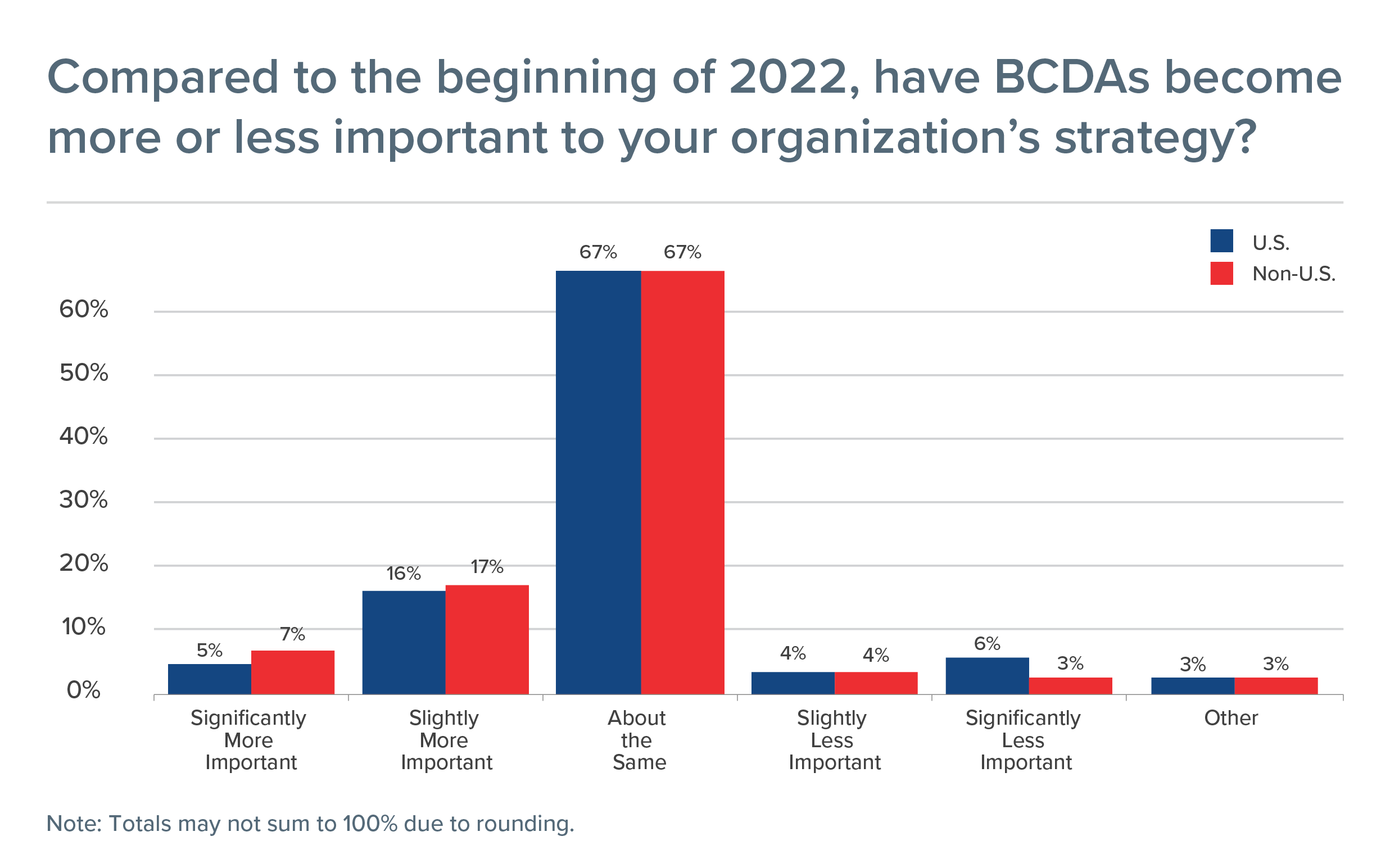 For both U.S. and non-U.S. company directors, about two-thirds of respondents (67%) indicate that the importance of BCDAs to company strategy had not changed at all this year.

Non-U.S. Company Directors in Favor of More Protections for Crypto 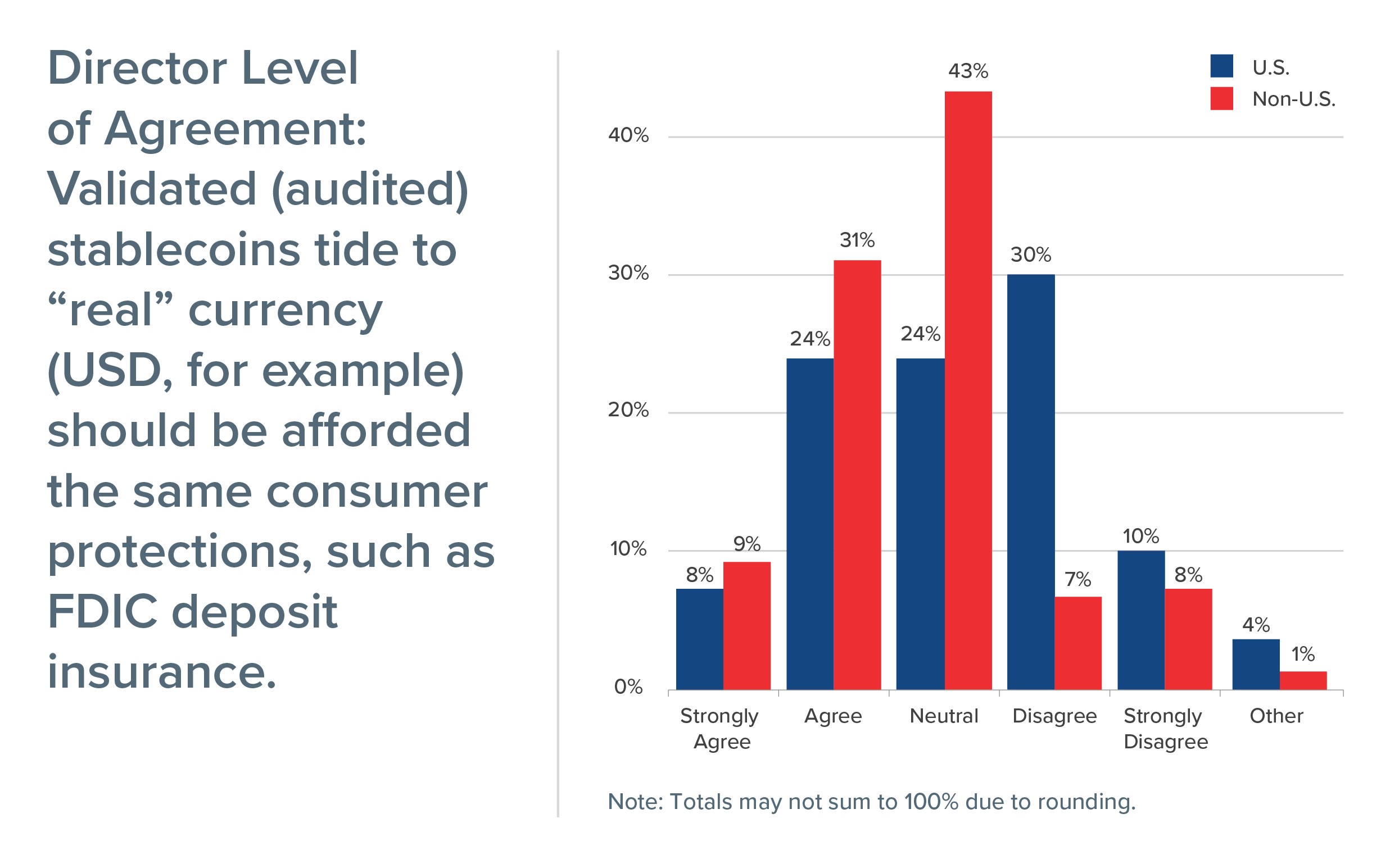 Directors representing companies in the financial services sector made up the majority of our respondents. We compare their responses with those of directors from other sectors and notice several key differences.

Compared with directors representing companies from other sectors, our respondents from the financial services sector are more likely to agree with the following statement: “The ability to understand and strategically incorporate benefits related to BCDAs will be important to my company’s global competitiveness in the future.” 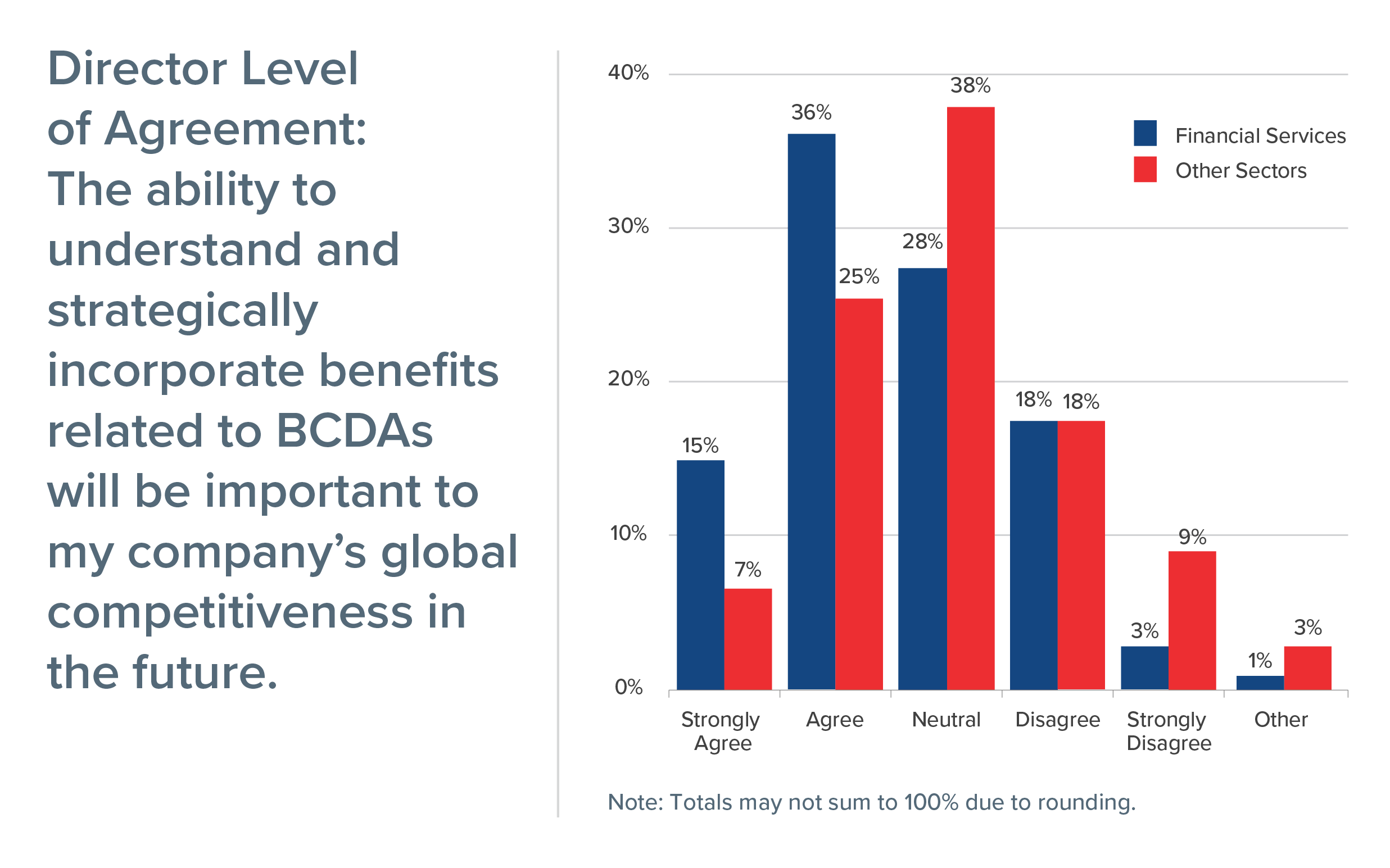 Interestingly, directors in financial services and in other sectors rate their boards the same when it comes to understanding BCDAs, at a 4 on our 10-point scale.

Strategic Importance of BCDAs Has Increased for Financial Services

Financial services directors are also more likely to say that BCDAs have become more important strategically for their organizations in the last six months. 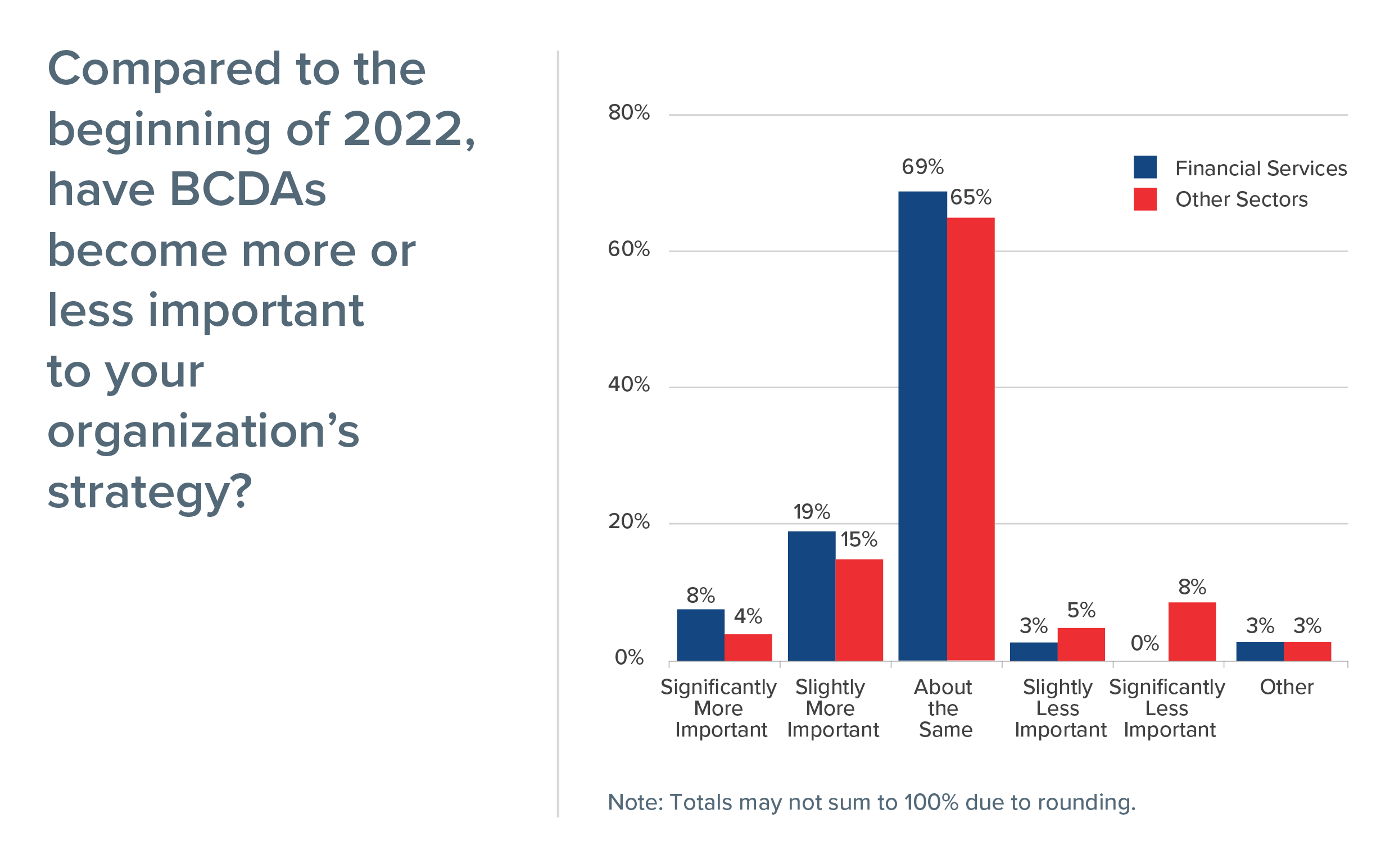 Financial services directors are also tapping a wider variety of sources for information on BCDAs compared with their counterparts in other sectors. While financial services directors are slightly less likely than their counterparts in other sectors to conduct their own research or consult director peers (at 55% to 57% and 19% to 21%, respectively), they turn to all other options listed at higher rates. 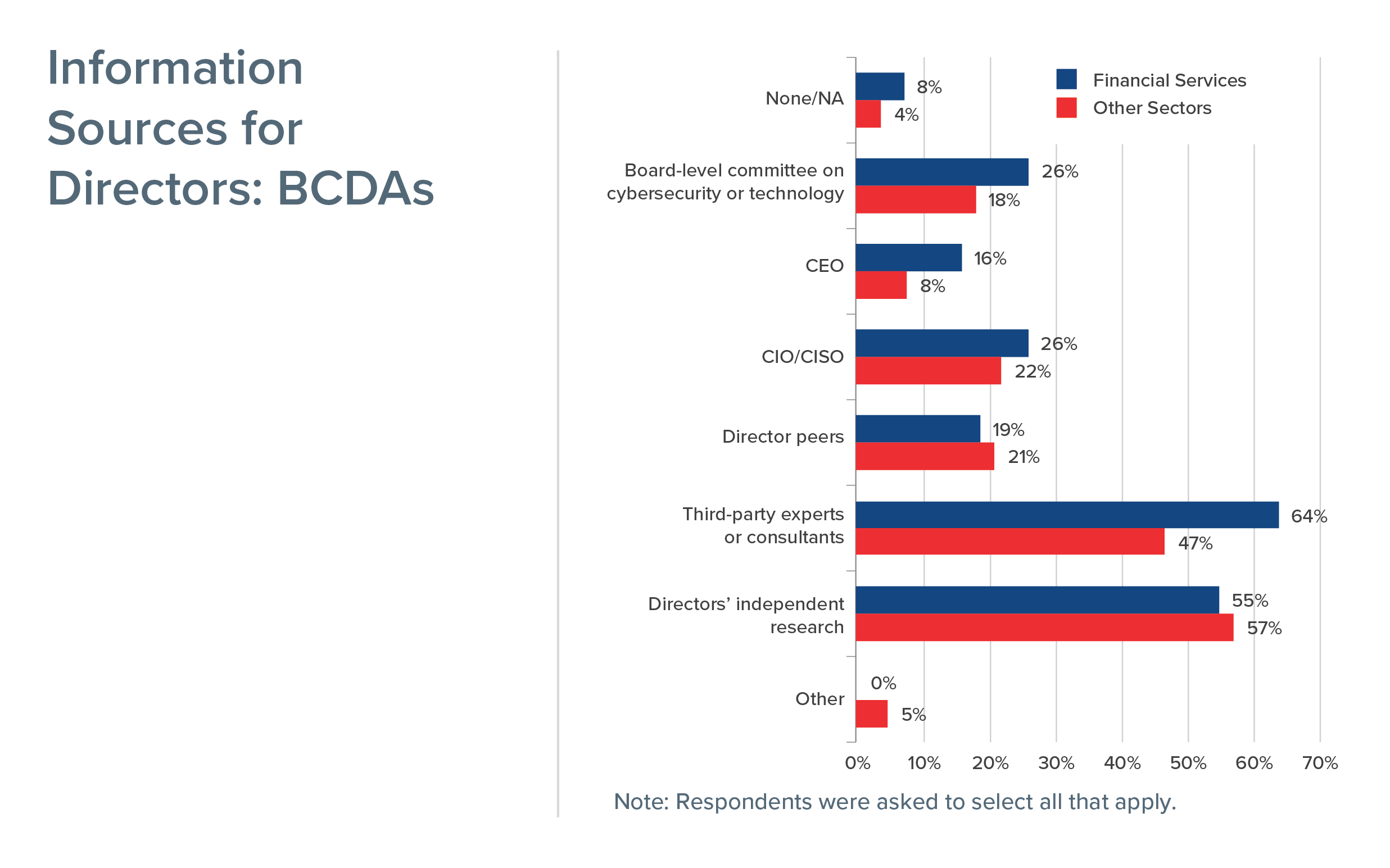 Kira Ciccarelli is the Lead Researcher at the Diligent Institute. Diligent Institute is the modern governance think tank and research arm of Diligent Corporation, the leading provider in board collaboration software. In her role, Kira works to conduct and provide high-level modern governance research to inform director decision-making and identify best practices. Before joining Diligent, Kira worked in a variety of data-driven research roles, including analyzing global aid funds to the UN Sustainable Development Goals (SDGs) and compiling a meta-analysis of political experimental findings for the Analyst Institute. She holds a BA in Public Policy from the College of William & Mary.