U.S. public company board members’ optimism heading into the spring is increasingly tempered by worries over new taxes and regulations.

Amid a surge in Covid vaccinations nationally, directors’ hopes for an economic recovery remained strong in April, but the surge in optimism we’ve been tracking for months flattened for the first time since last fall, as developments in Washington—particularly the impact of government stimulus programs and proposed increases in taxes and regulation–tempered their outlook for growth.

Those are the key findings from our April Director Confidence Index, a poll of public company board members conducted in partnership between Corporate Board Member and Diligent Institute. Our forward-looking indicator stalled this month at 7.5 out of 10 on our 10-point scale, up less than one percent since the prior month. Comparatively, CEOs’ outlook in April increased 3 percent to 7.3/10, only 2 percent behind directors’ forecast, as reported by Chief Executive earlier this month.

Infrastructure investments, the cost of capital and forecasts of herd immunity by this time next year are all factors driving director optimism in an economic recovery, although continued supply chain shortages, potential tax increases and inflationary risks are causing many of the 121 directors polled April 18-21 to be cautious in their outlook.

When assessing the state of the current business environment, directors are adopting a slightly more bullish stance, with our Index reaching 7/10 in April, up 3 percent since March, largely due to improving market valuations and increased consumer spending. 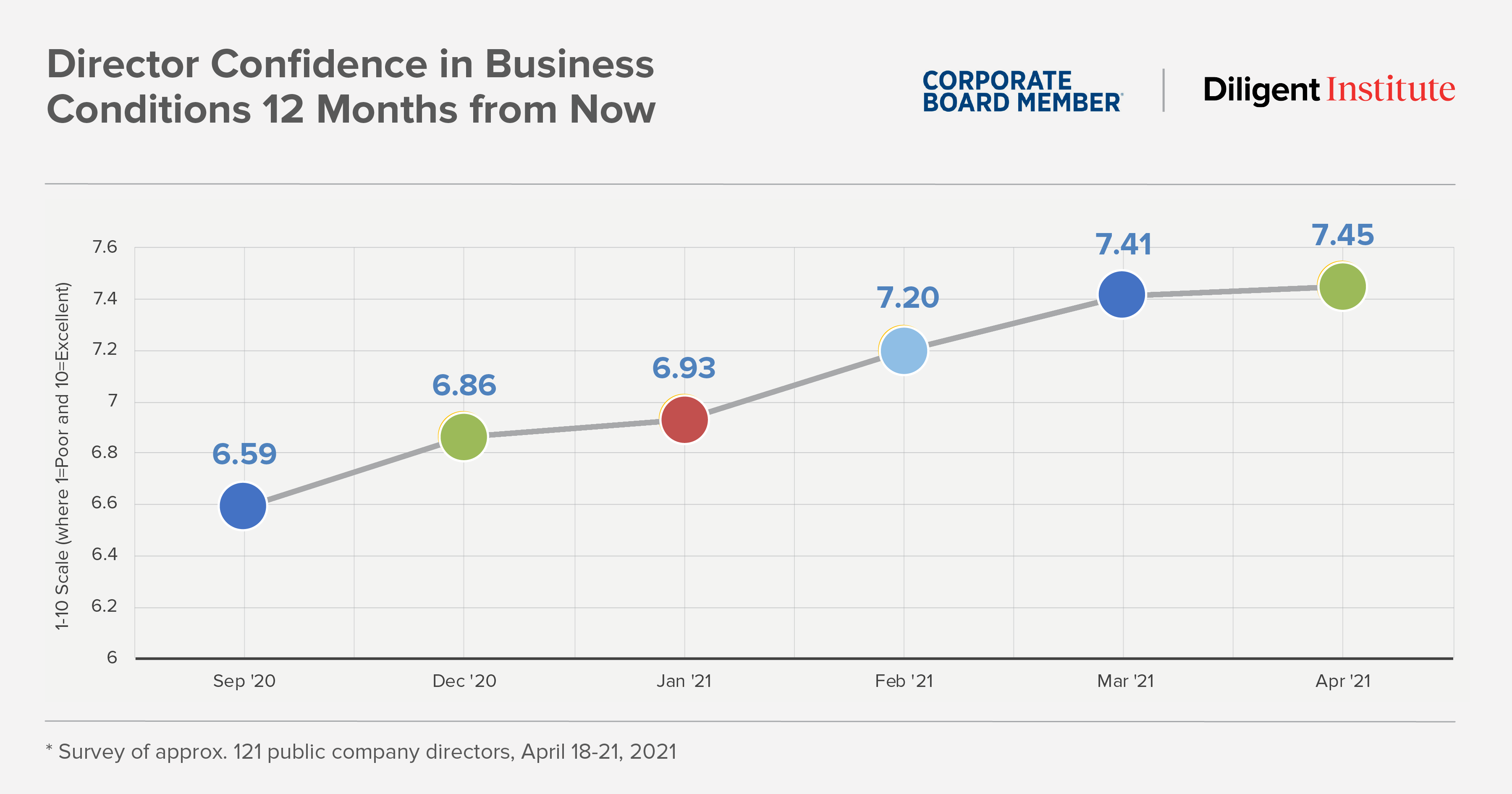 While the majority of directors (55 percent) surveyed this month forecast improving business conditions by April 2022, a third (23 percent) continue to expect conditions to deteriorate. William Laperch, director at Digital Realty Trust, says his 7/10 rating in current conditions is fueled by “the flood of stimulus money,” but his outlook for the future drops to a 5/10 because he sees “a reality of future inflation.” 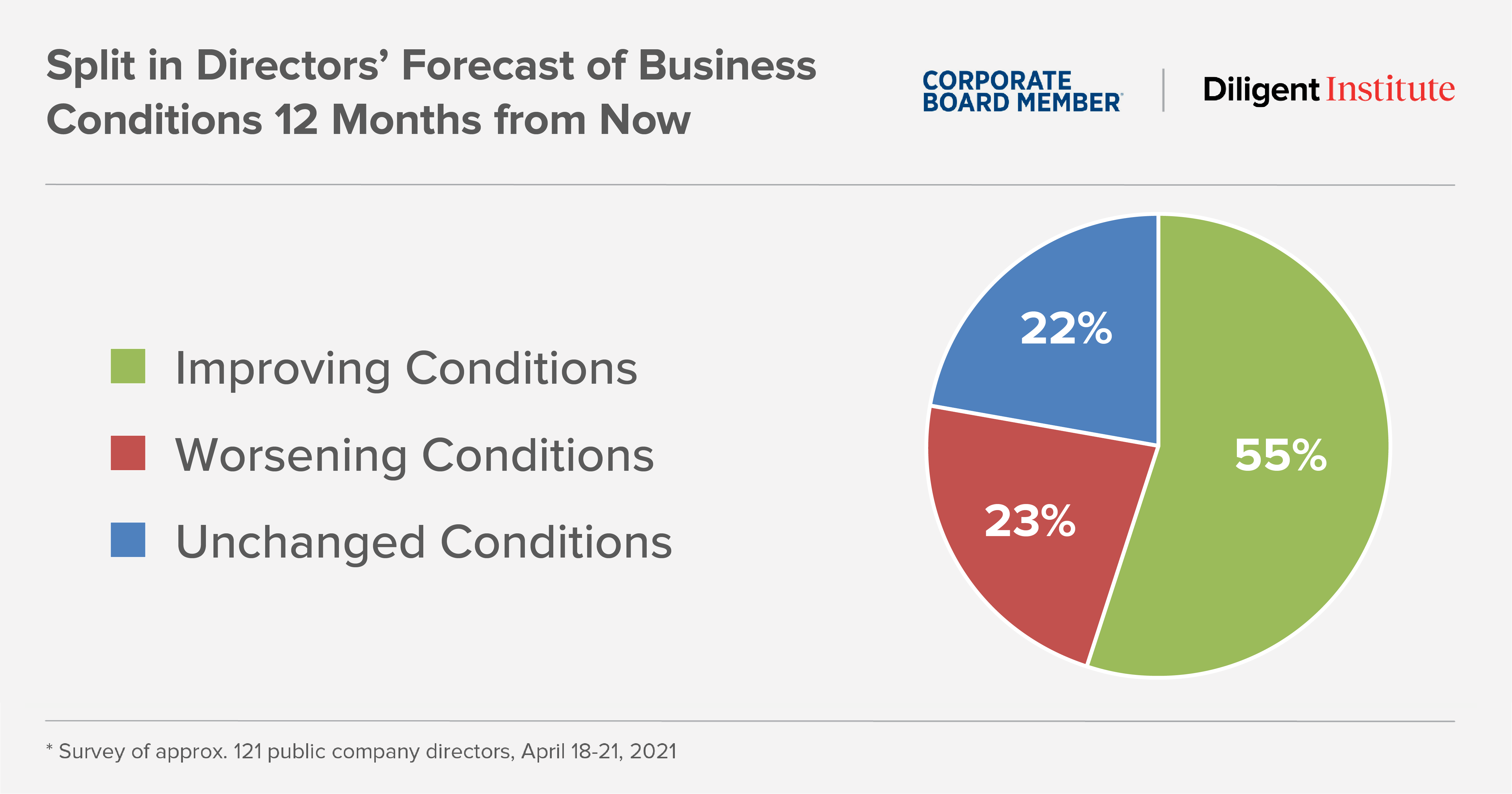 Several directors echoed his sentiment about inflation this month: “Strong recovery now but concerned about massive spending and inflation,” says a director at a large company in the real estate sector who expects conditions to drop from an 8/10 currently to a 5/10 in the future.

Directors who expect conditions to improve say it’s only a matter of time before business reaps the benefit of vaccinations and reopening of states and hard-hit industries.

A director at an industrials corporation who expects conditions to improve over the coming months says his optimism is fueled by “Covid-19 vaccines increasing in most of the U.S., reopening of economies due to vaccine success and job growth,” he says, adding he expects job growth to be even broader this time around due to the lessons learned from the work–from–home environment.

In April, the proportion of directors forecasting an increase in profits and revenues in the year ahead grew 7 and 6 percent, respectively, month over month, to 88 and 93 percent, the highest proportions since the Director Confidence Index began polling in September of 2020. 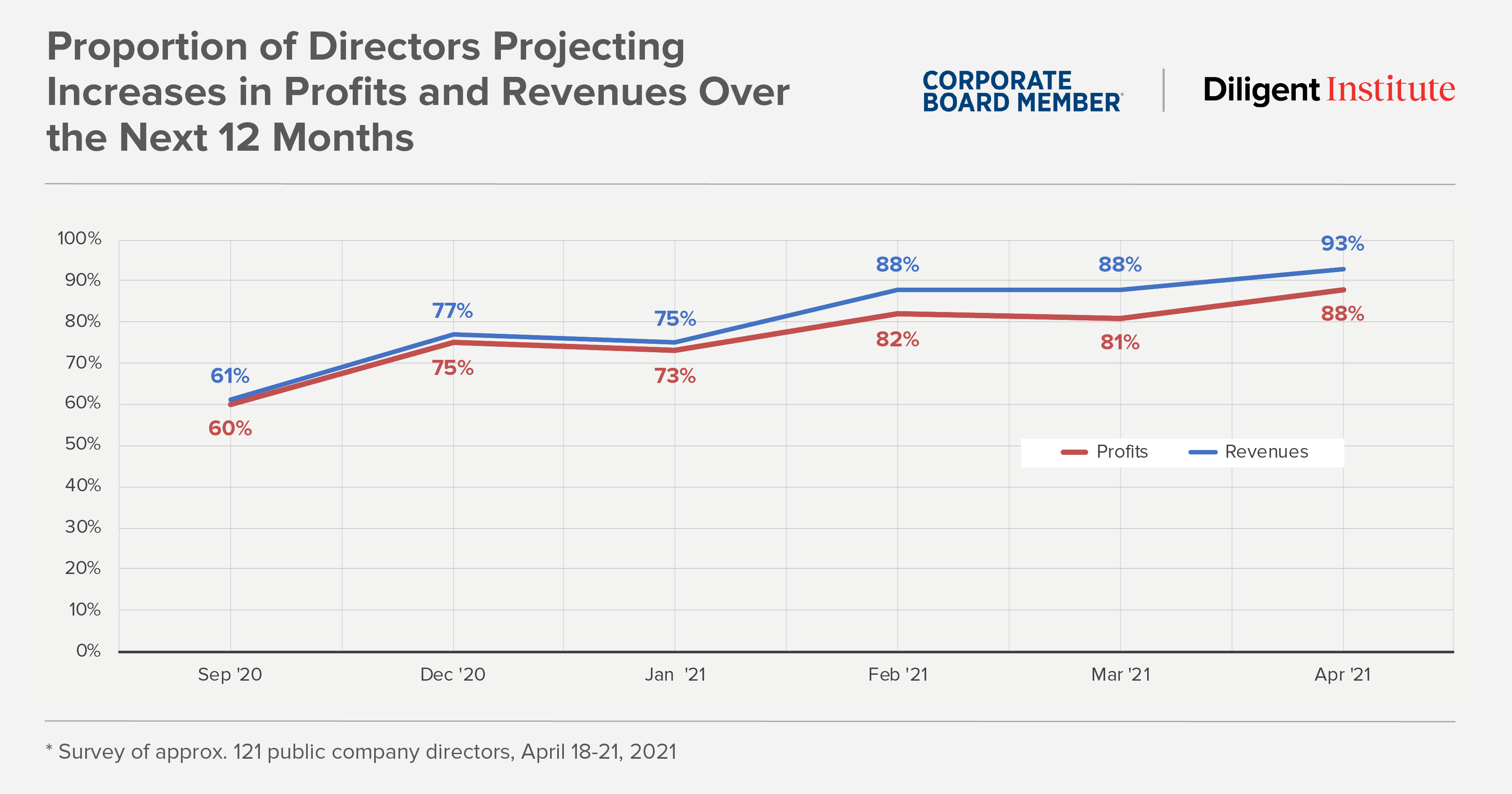 The percentage of directors forecasting an increase in capital expenditures dipped slightly to 64 percent this month, compared to 65 percent in March, bringing directors’ forecast in line with that of CEOs. 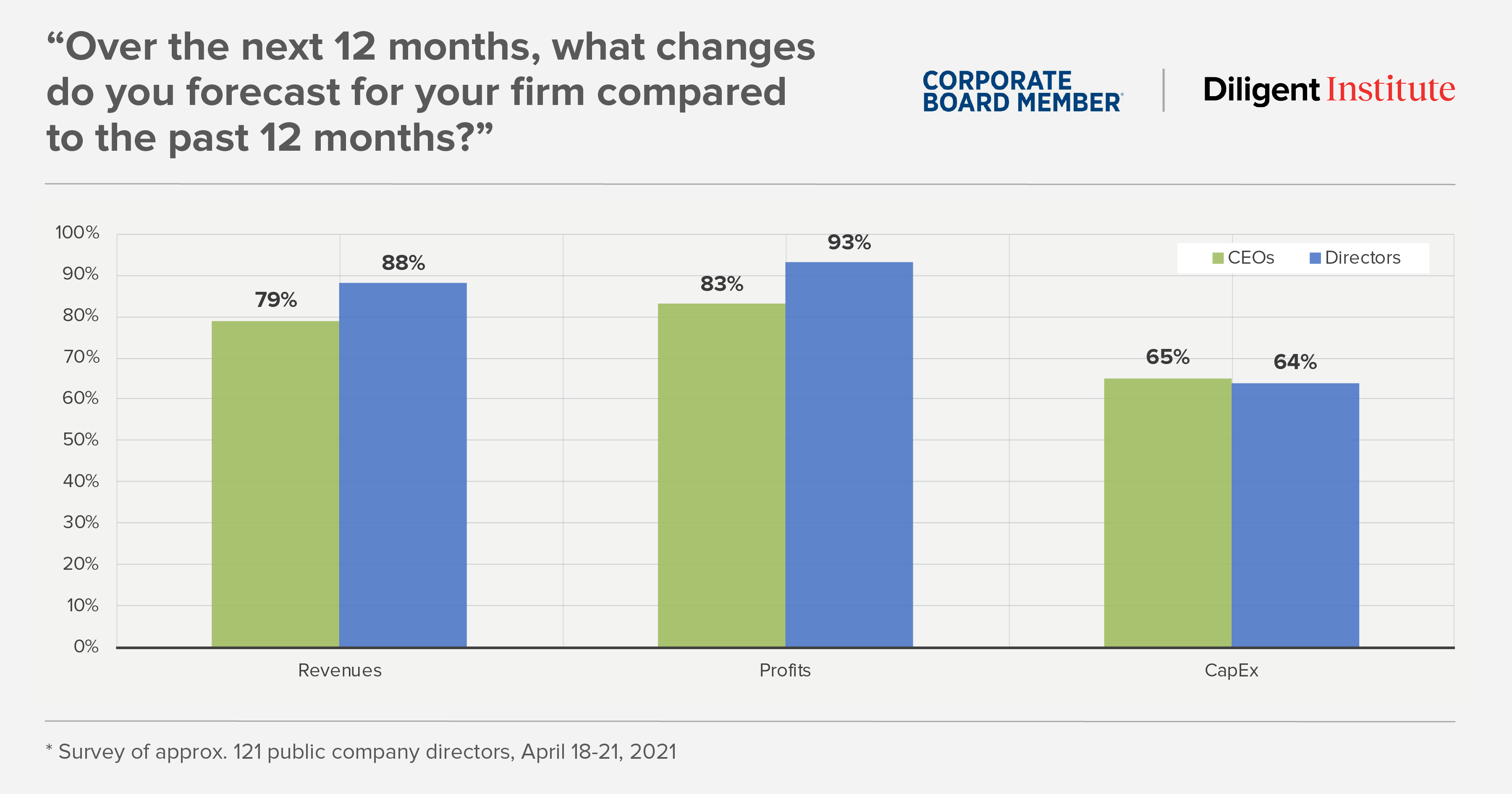 Director confidence across sectors is wide-ranging—unsurprisingly. This month, directors in the health care sector reported the lowest level of optimism, rating their forecast for business at this time next year 12 percent lower than they did in March, at 6.7/10. There’s no doubt that this sector is at a crossroads at this time, as lingering effects of Covid-19 persist in staffing, financial and operational challenges across the industry. A director in the industry voiced her concern about staffing and unemployment: “We cannot continue to subsidize unemployment,” she says, echoing other directors’ concerns about federal support.

Meanwhile, directors in the consumer staples sector reported the highest increase in confidence, up 36 percent in April, at 7.6 out of 10, on hopes of a release in pent-up demand in combination with the effects of government stimulus programs.

Despite a dip of 9 percent in confidence, directors in the consumer discretionary sector remain among the most optimistic cohorts this month, along with peers in the energy and technology sectors, each group rating future business conditions a 7.8/10. 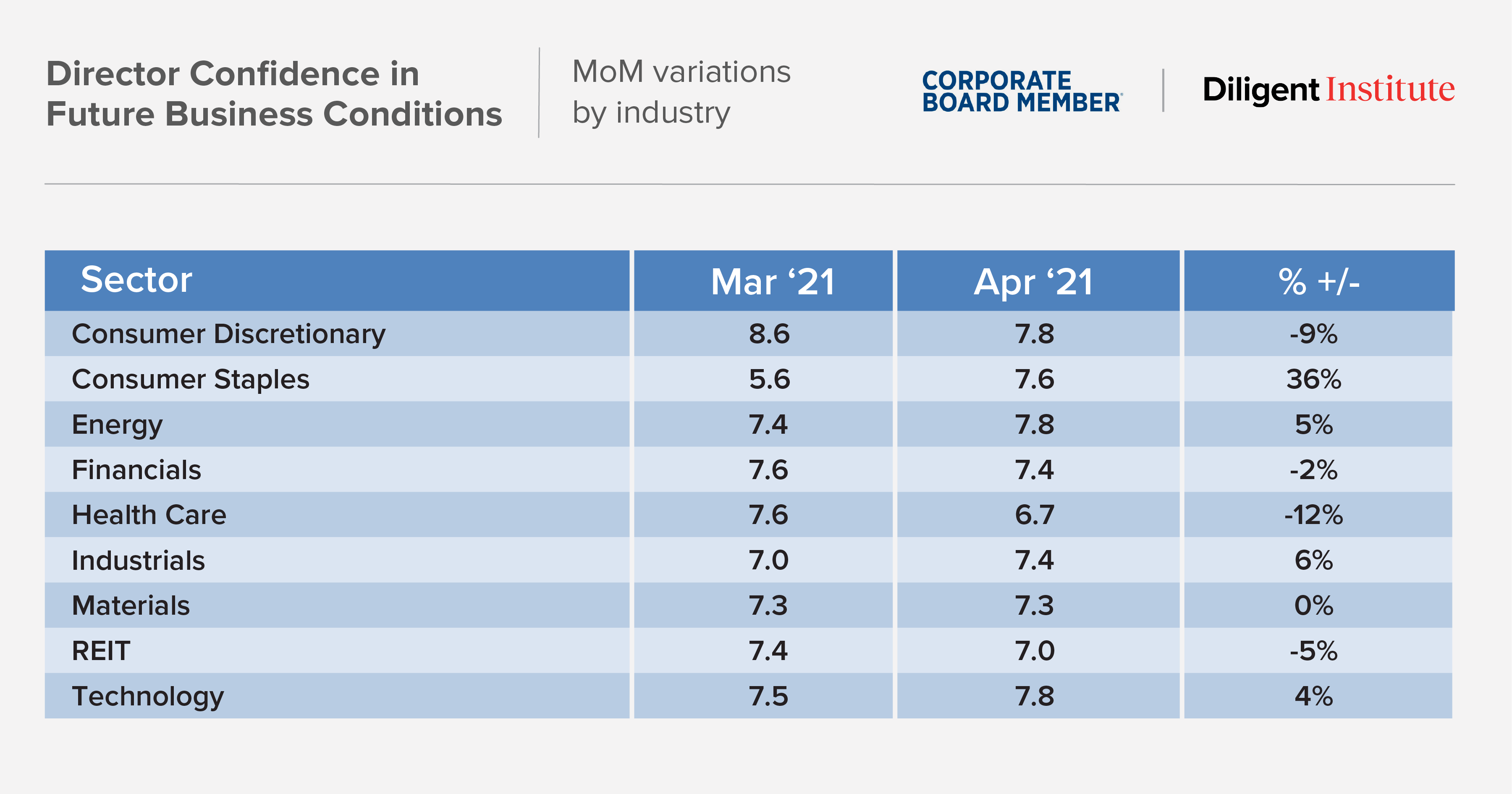 Back to the Office?

This month, directors participating in the poll were asked questions about their companies’ plans for returning to in-office work, what that means for employees and how the decision is being made. Our findings show that 80 percent of companies are currently opened at less than full capacity—only 5 percent are at full capacity. The rest are either closed with plans to reopen later this year (12 percent) or closed with no plans to reopen at this time (3 percent). 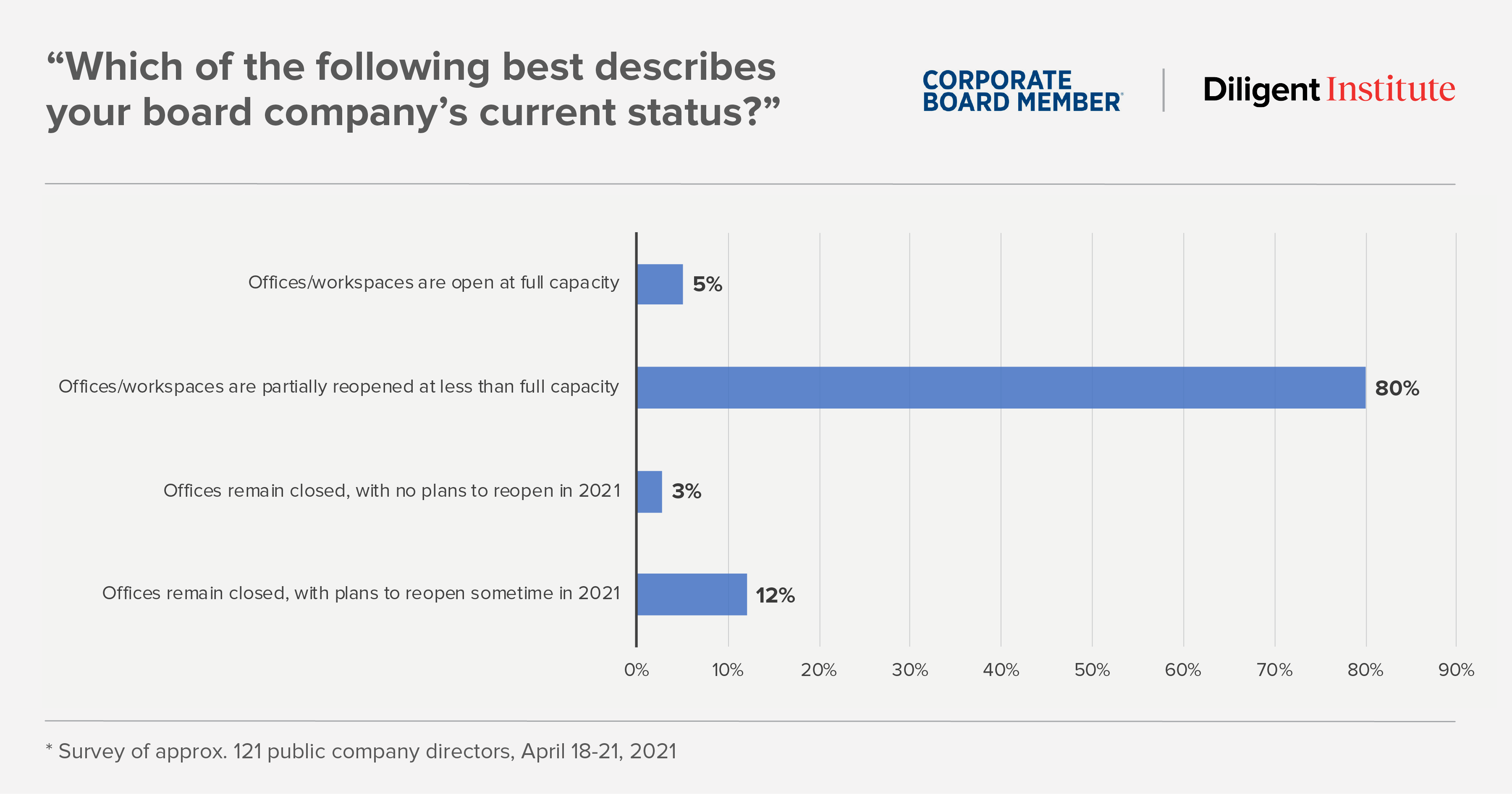 Among those whose offices are currently open—at full or partial capacity—90 percent say they require their employees to practice social distancing, and 84 percent require their employees to wear a mask—the most widely required Covid-19 mitigating actions.  However, this means that a full 16% and 10% of respondents with partially or fully reopened offices do not have a mask mandate or social distancing rules in place, respectively.

There’s been a lot of ink spilled over whether companies should be requiring employees to obtain a COVID vaccine in order to come back to the office, but so far, only 15 percent of respondents say that their company mandates vaccination. According to the directors surveyed, it is more common for workplaces to require a temperature check, with 44 percent of directors saying that is a measure taken by their company. 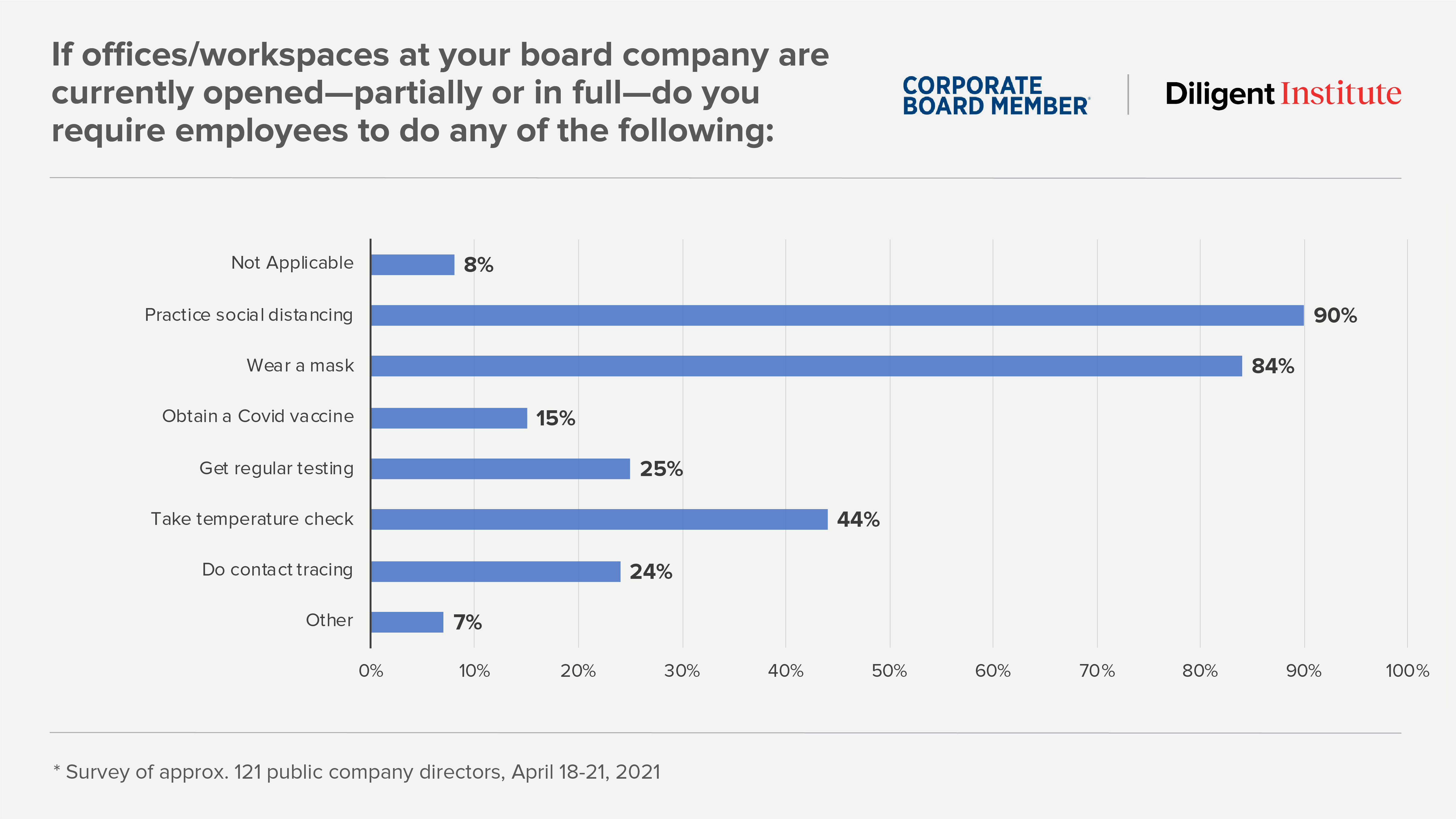 When evaluating the future of work, directors say the most important internal elements their companies are considering in the decision-making process are, first, corporate culture (45 percent), followed by productivity levels (42 percent). Employee preferences rank third on the list.

Nearly a quarter (73 percent) of directors also note certain external elements weighing in their decision, with state and local guidelines among the most important—well ahead of vaccination rates (53 percent) and federal regulations (16 percent).