America’s boardrooms remain deeply pessimistic about the future of the economy, with a sizable and growing majority now convinced that the U.S. is on track for a recession in the months to come.

Our April Director Confidence Index, a poll of 133 U.S. public company directors, conducted April 18-22 in partnership with the Diligent Institute, plummeted 9 percent between March and April.

Directors say they are concerned about the impacts of record-high inflation above all else. The vast majority now predict business conditions to get worse over the course of the next year, at 61 percent. Directors are wary of the federal government’s ability to lead the nation away from this path as businesses continue to face issues in the global supply chain and a race for talent.

Our leading indicator is now at 5.7, as measured on a 10-point scale where 10 is Excellent and 1 is Poor. This is the second month in a row that directors’ rating has reached a record low and the first time our indicator has dipped below the rating of 6, or “good.” 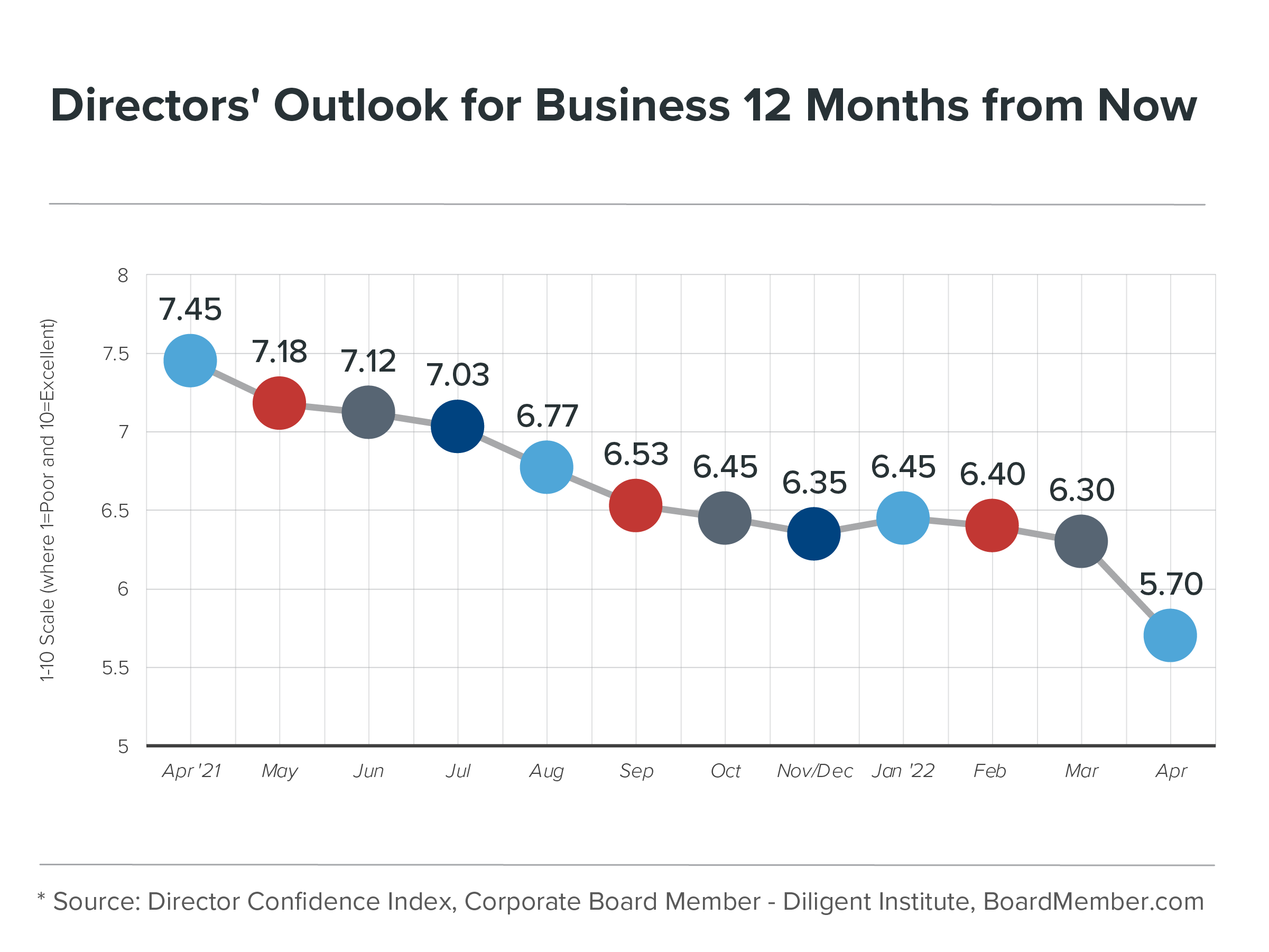 A growing number of directors are also voicing their dissatisfaction with the current Administration, citing stifling regulations and lack of leadership from both the White House and the Fed. Directors remain concerned over the ongoing war in Ukraine, its effect on supply chains and the economy, and the uncertainty over how it will all end.

These findings continue to align with Diligent Institute’s Corporate Sentiment Tracker, an AI-powered tool which tracks the issues corporate leaders are speaking about most frequently in the news and whether they’re speaking about those issues in a positive or a negative way. At the time this report is being written, overall corporate leader sentiment is at 60% positive and the top term in the last 14 days is “inflation.”

The “current policies of the Biden administration are resulting in unprecedented pressure on the underpinnings of the nation’s economy and consumer spending,” says Chris Clemente, Chairman & CEO at Comstock Holding Companies, Inc., a real estate company. “Record high oil & gas prices are directly correlated to President Biden’s lurch to the left and are contributing to the record setting inflation.” Clemente expects conditions to deteriorate further, down to a 5/10 from his 7/10 rating of current conditions. “While intentions may be noble, i.e., a green economy, trying to force a desired outcome through burdensome regulations without any concern for the impact on average people is foolish.”

Others agree that leadership in Washington in lacking but maintain that conditions will at least remain stable.

“The US debt level, inflation, leadership vacuum in DC, direction of Fed (more lack of leadership), lack of focus of electorate are all elements in my forecast,” says Stephen Kasnet, board chair at Two Harbors Investments, who rates both current and future conditions a 7/10.

A director at a semiconductor company rates both current and future conditions as a 4/10, explaining, “My forecast is driven by these elements: 1. High interest rates, 2. War in Ukraine, 3. Supply chain hang-ups and shortages, 4. An administration that is misguided and interfering with business and 5. Linger effects of the COVID virus.”

Directors’ sentiment surrounding the current business environment dropped slightly this month, down less than 1 percent, hovering at a 6.6 out of 10. This is 5 percent below their rating of current conditions one year ago, in April 2021.

The findings closely mirror the montly survey by our sister publication, Chief Executive. CEOs they polled rate current business conditions as a 6.6/10 for the month of April, down 3 percent from March and 6 percent below their rating of current conditions one year ago. CEOs’ forecast for the future of business conditions plummeted at the same rate as directors, down 9 percent month over month. Their rating is now 6.1/10, still 7 percent above that of directors and within “good” territory. Nonetheless CEOs’ optimism is at its lowest level since the fall of 2016 amid the Clinton v. Trump election. CEOs share many of the same worries as directors, voicing concerns over inflation, supply chains and the threat of a Fed-induced recession. 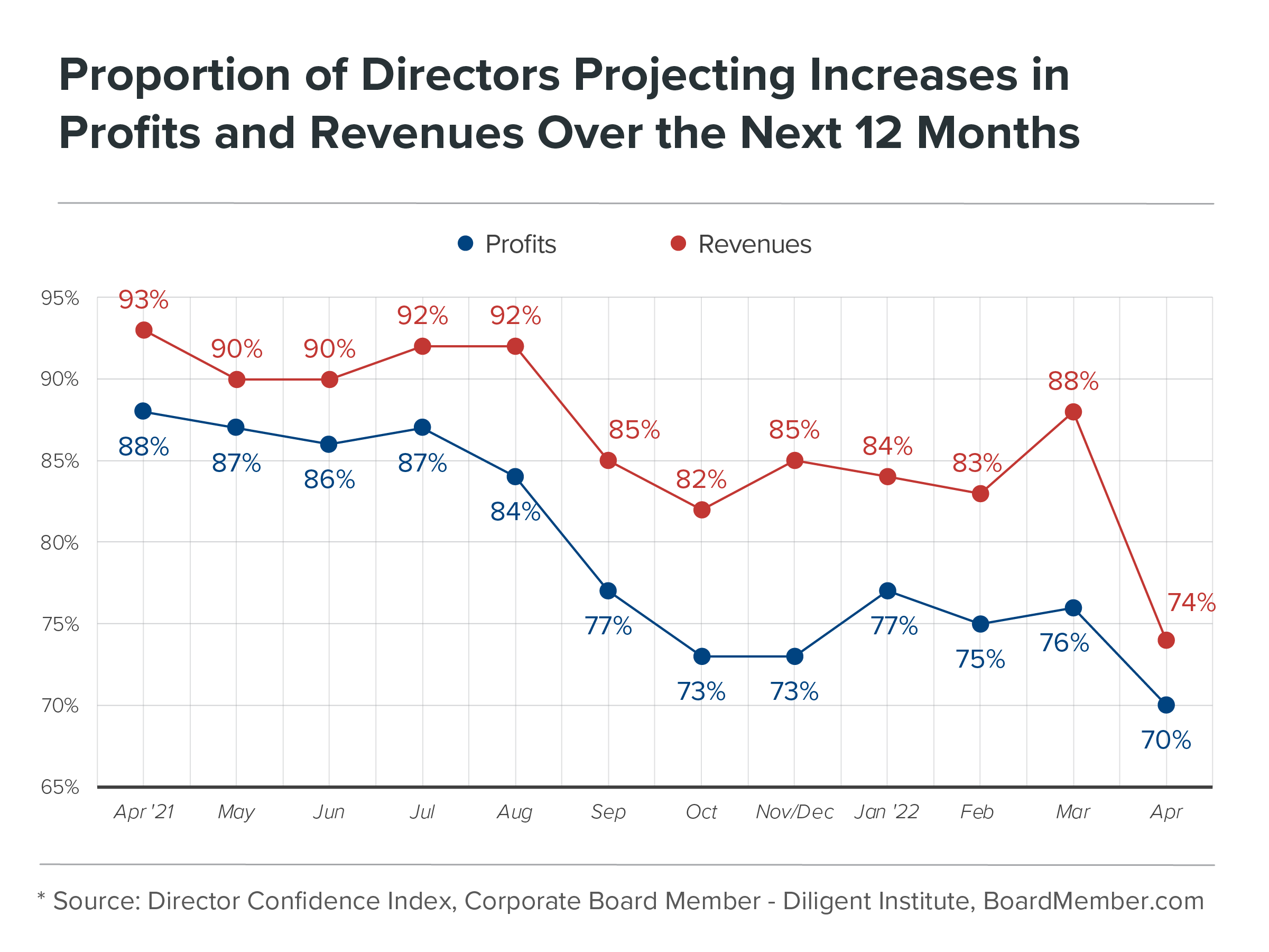 “Excessive inflation and its impact on consumer households and their ability to meet debt obligations while putting food on the table and gas in their tanks,” says one director in banking. He lists the reasons why he rates current conditions as a 7/10 but expects them to plummet to a 4/10 over the next 12 months, “Rising interest rates and their impact on the housing market.  I am fearful of an economic recession within the next 12 to 18 months.”

One director of an office supply manufacturing company says, “Recovering demand in many sectors and markets is being impacted by supply chain challenges, geopolitical worries, inflation impacts and rising interest rates which will likely further temper global economic activity.” He expects conditions to drop from a 7/10 now to a 6/10 in the future.

Only 17 percent of directors expect conditions to improve, while 23 percent expect the business environment to remain the same.

The hopeful directors say that inflation has hit its peak and that the war in Ukraine will resolve the next year. With that comes stabilization in the supply chain and less uncertainty overall, improving business conditions.

“I believe we have reached peak inflation. Unemployment rates are low. The Ukrainian war should be over within 12 months.  There do not seem to be the same supply chain snarls today.  The economy remains strong.  As inflation moderates, war ends, supply chain becomes more robust, the business climate should be better in 12 months,” says the director of a bank. He expects conditions will improve by one point to an 8/10 12 months from now. 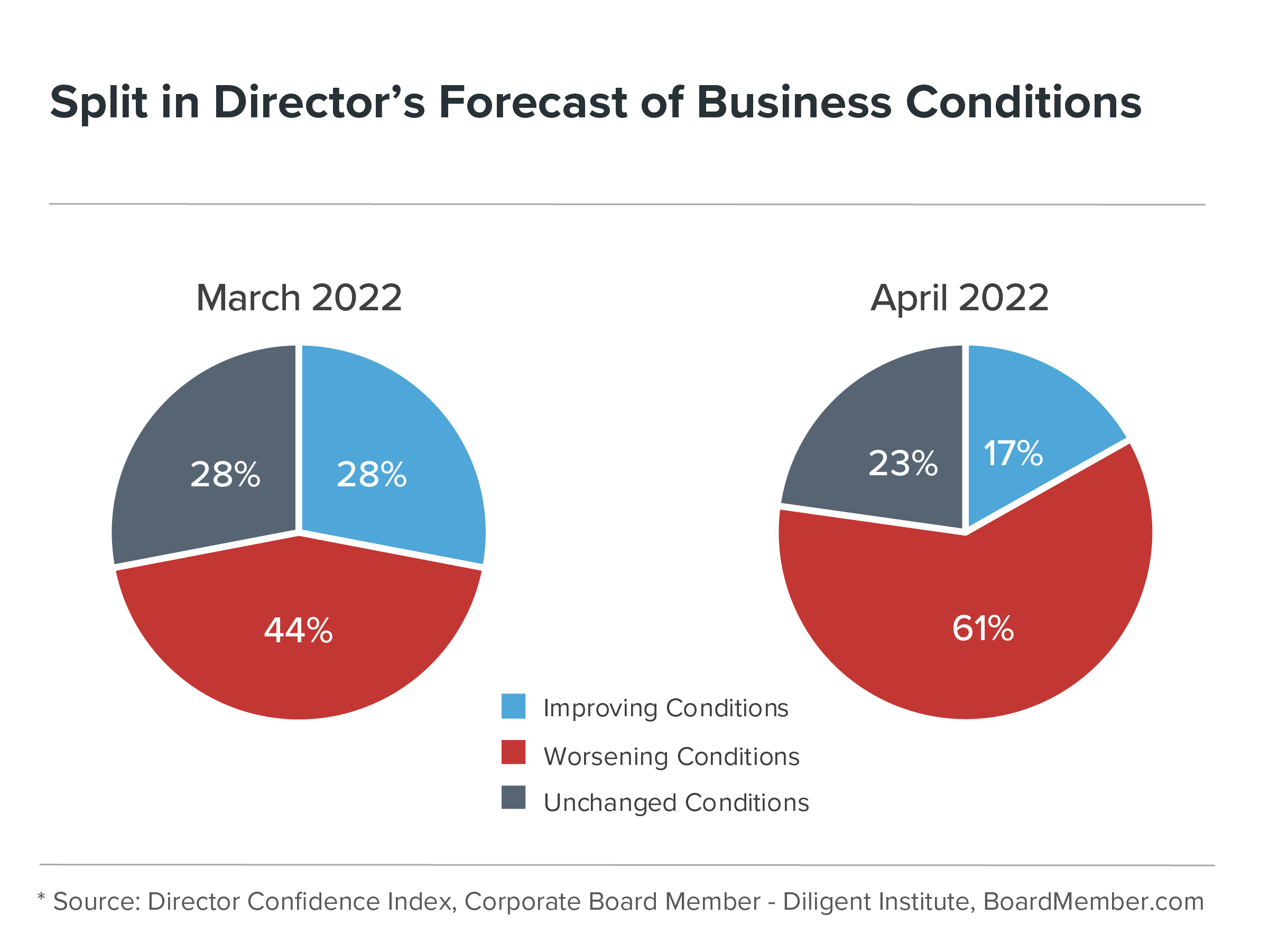 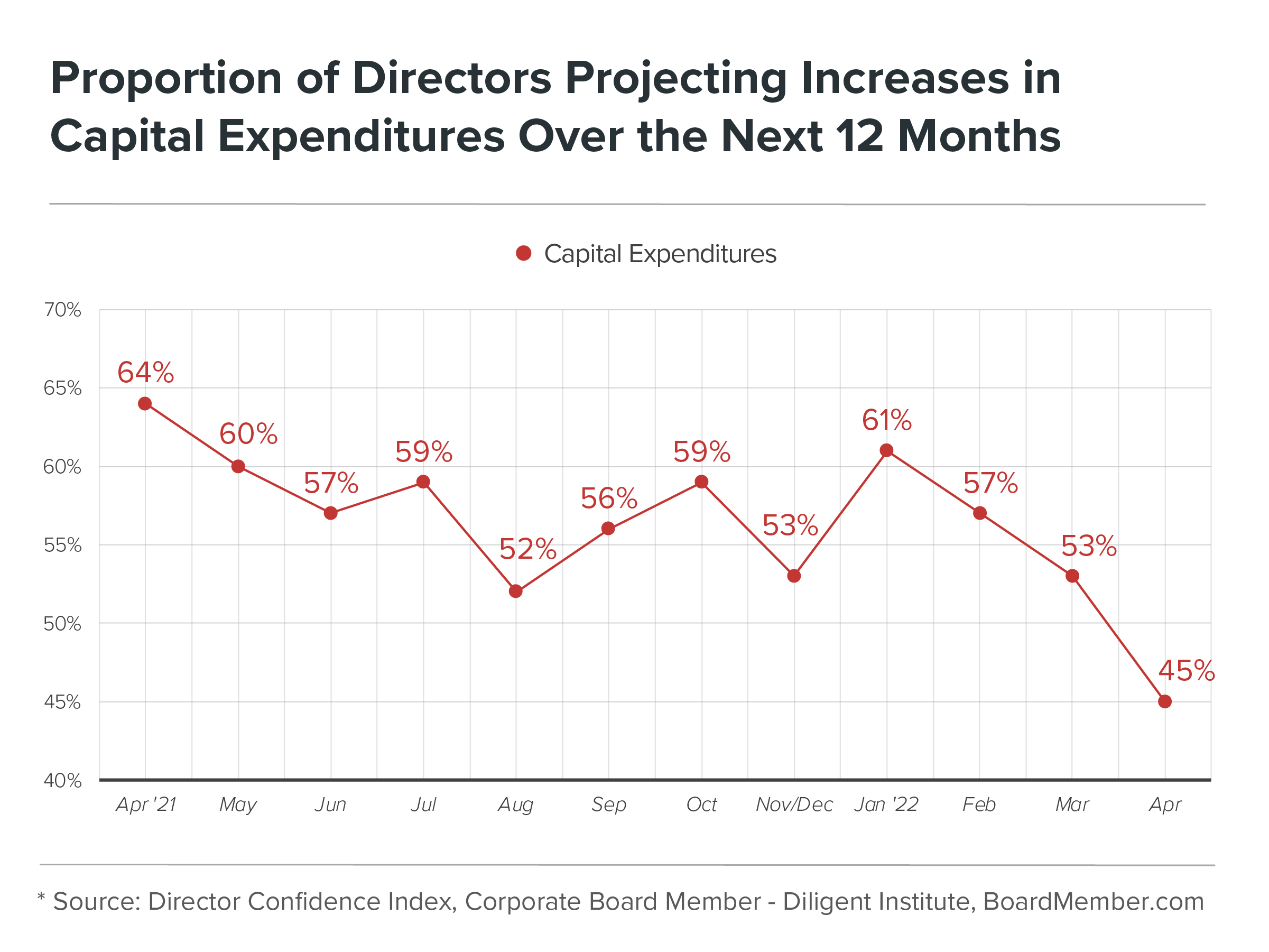 A Quarter of Directors Yet to Act on SEC Climate Proposal

25 percent of directors have not yet taken any steps regarding the SEC’s new proposal on climate change disclosures. Overall, they rate the impact it would have as a 2.85/5, with only a 10 percentage point difference between the proportions of those who think its impact could be significant versus none at all.

At the end of March, the SEC proposed rules that would require public companies to disclose extensive climate-related information in their SEC filings. Between April 18 and 26, Corporate Board Member, in partnership with Diligent Institute, surveyed 133 public company directors about the proposal, their actions and potential compliance failures. 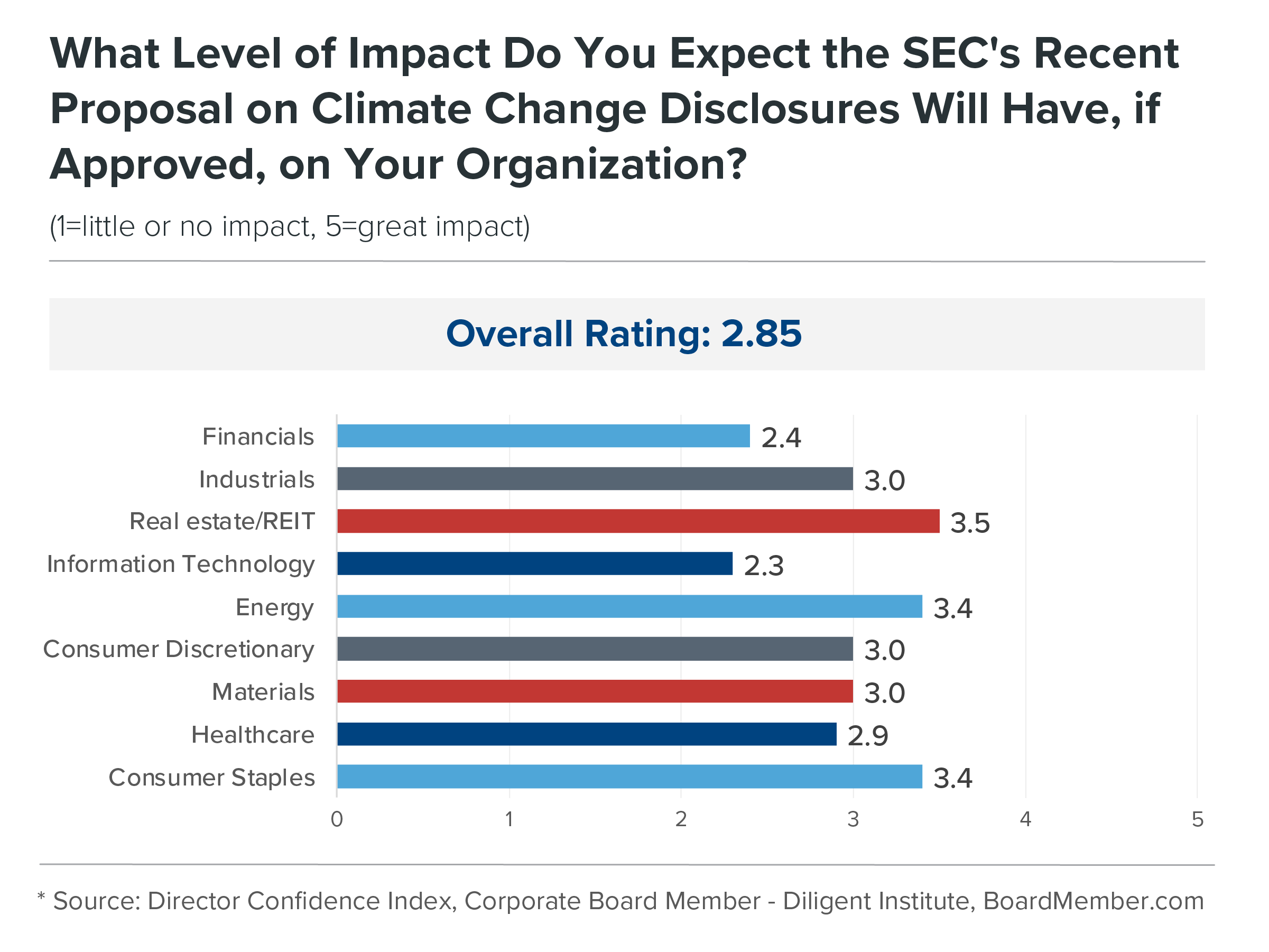 A lead director at a storage company says, “We’re concerned with the SEC action and studying it to see how we might have to comply.” He ranks its level of impact as a 5/5.

“SEC proposal is intrusive, beyond its charter and not the function to force companies to implement political policies,” says a director at a pharmaceutical company.

Still, some directors expect the proposal on climate change disclosures to have little impact.

“I believe that thoughtful Boards and management teams have been addressing ESG for some time. However, the SEC rules on climate change will hopefully be another step on the important path to driving consistent, comparative data across companies at least on the important ESG topic of climate change,” says Jonathan Foster, director at Lear corp. He ranks the impact as a 2/5.

Regardless of their opinion on the impact of the proposed SEC rule, 57 percent of all directors have at least discussed the proposal at the board level. Still, a quarter of directors have not taken any action on the matter, highlighting the difference in urgency across sectors and companies. 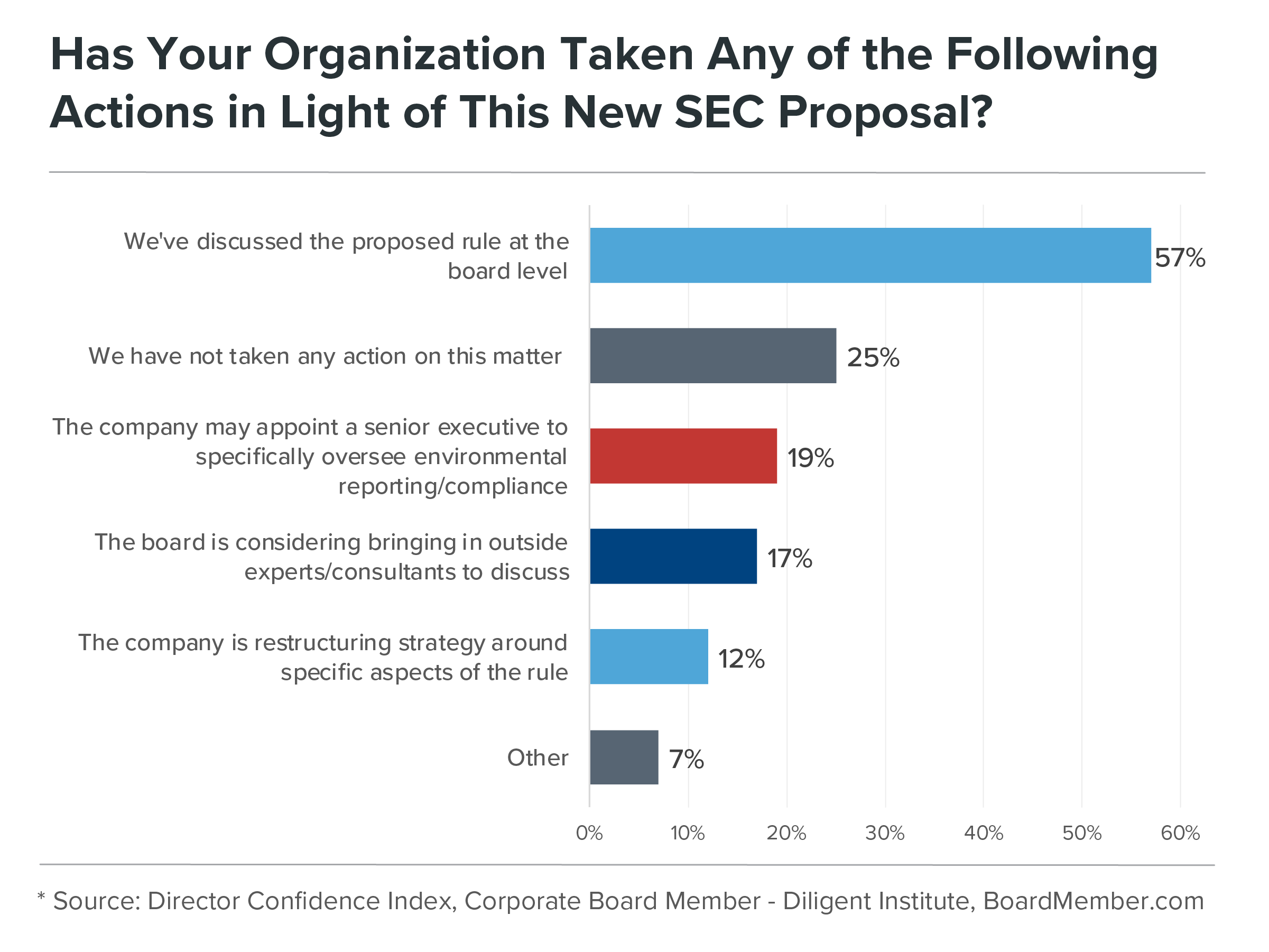 Some directors that listed “other” as their choice say that they are waiting to see what the proposed rule’s effects could be and will take the appropriate action if and when the rule is in
place. Others say they have previously taken all appropriate steps and are now ready to comply with SEC’s proposed rule on climate change disclosures if and when it takes effect.

The importance of the matter also varies by industry. Compliance may mean something different to those in energy compared to those in financials. In the industrials sector, zero percent of directors say that they haven’t acted in light of the SEC proposal, meaning that all respondents in industrials have at least discussed the proposed rule, are restructuring their strategy or appointing someone to oversee climate compliance and reporting. In fact, 79
percent of directors in industrials say that the board has discussed the SEC’s proposed rule on climate disclosures—the highest of all industries. 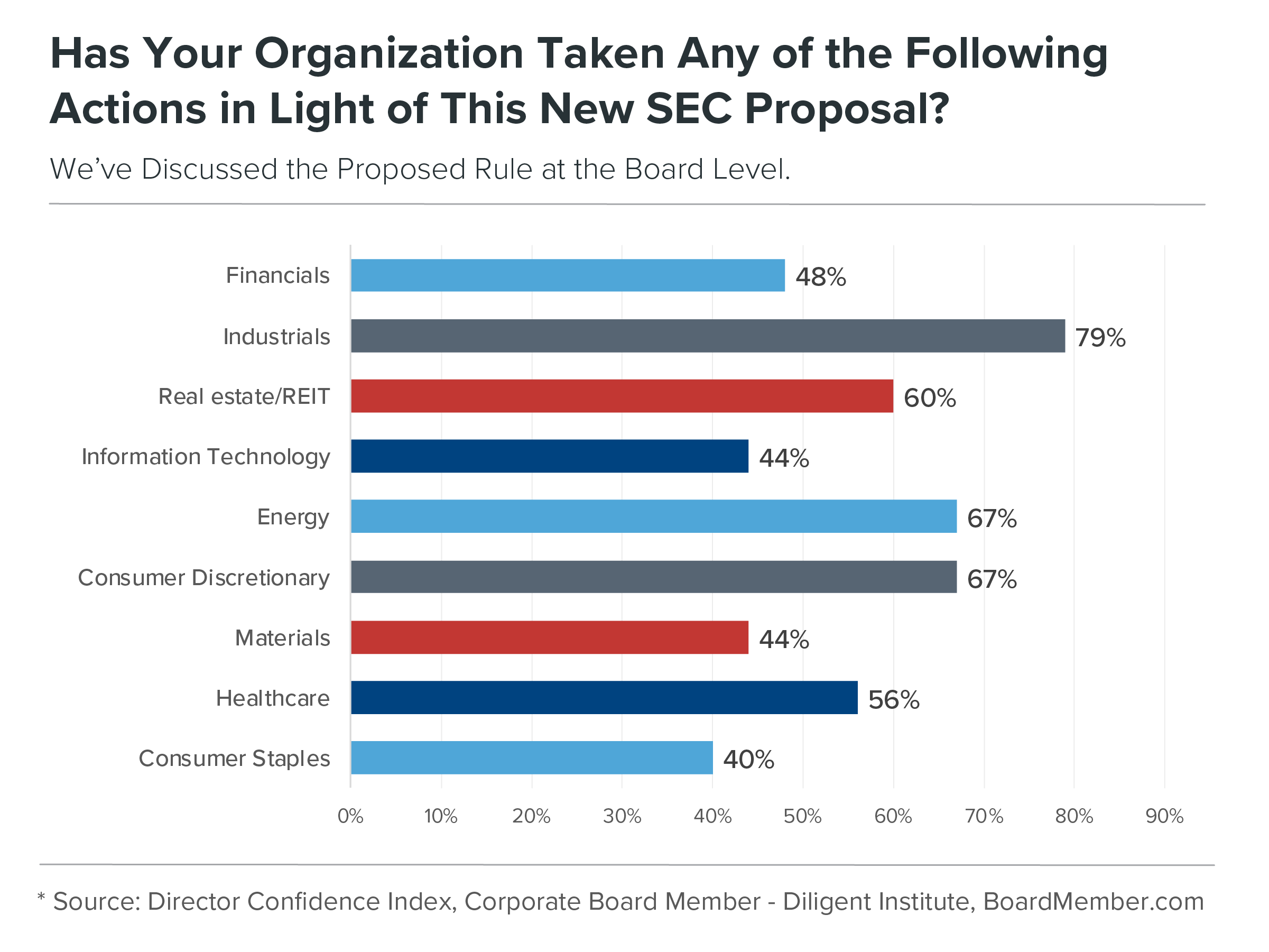 Given the fact that directors in energy rate the expected impact level of the rule to be a 3.4 (the second highest rating), it is no surprise that only 11 percent of them have not yet acted regarding the proposal. 22 percent of directors in the energy sector selected other, with one director responding that “the company has already taken most of these actions.”

In fact, our research shows that environmental disclosures and regulations are a growing area of concern when thinking about potential compliance failures for 43 percent of directors overall—compared to only 19 percent who say that it is not a significant concern.

Of course, cybersecurity/data privacy is an increasing concern for the largest proportion of directors, at 67 percent. 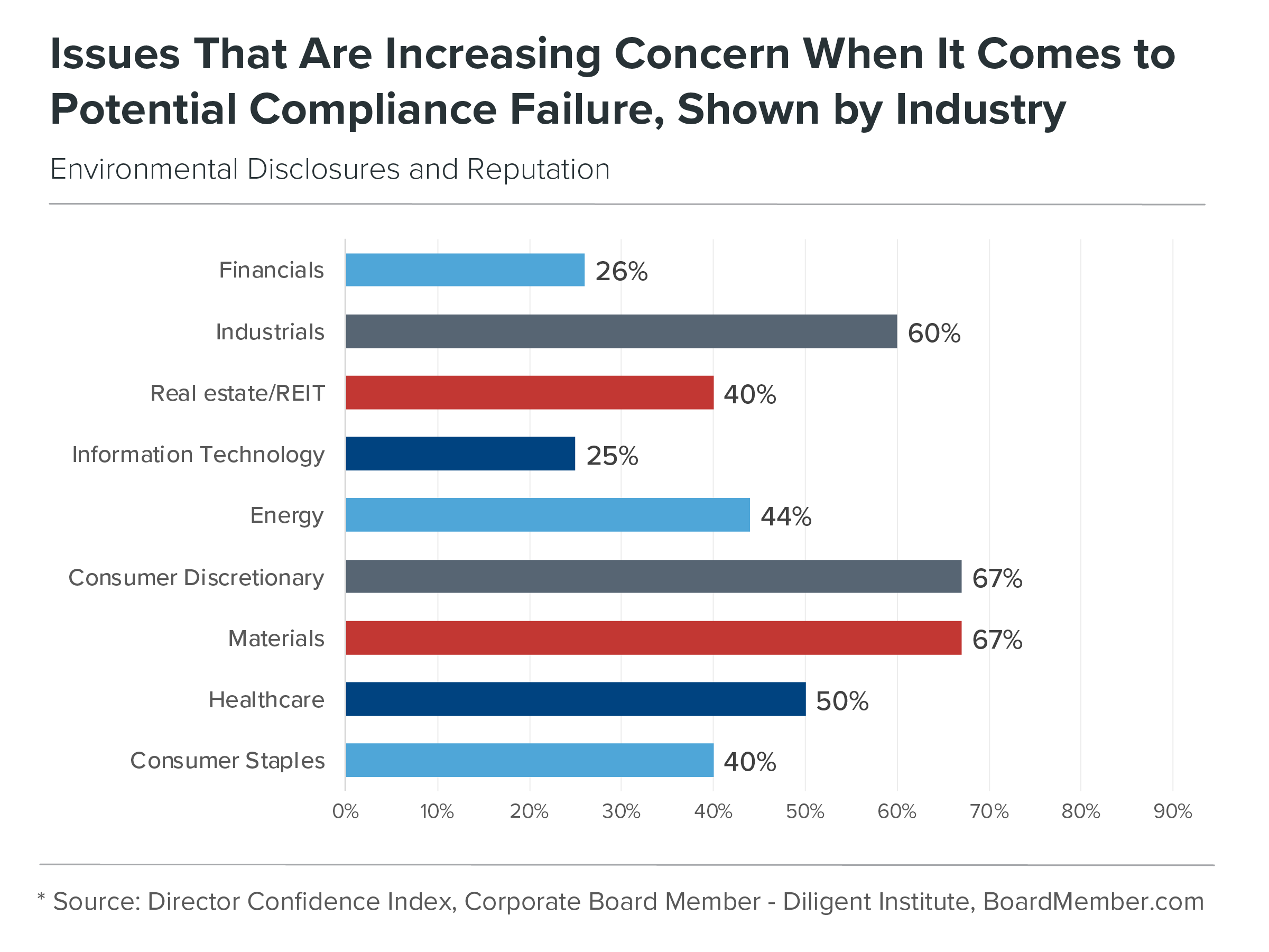