Director optimism continued to slide in August and into the early days of September due to a growing list of concerns that include COVID-19 variants, labor shortages, supply chain disruption, fiscal and monetary policy, international political instability and a less business-friendly administration in the White House. Overall, directors say they’re increasingly concerned about the current array of disruptions and the uncertainty over what lies ahead.

Those are the key findings from our August 2021 Director Confidence Index, a flash poll of 192 public company board members conducted in partnership between Corporate Board Member and Diligent Institute. Our leading indicator is down 3.7 percent since July, to 6.8 out of 10 on our 10-point scale. It has lost 9 percent since its April high, when optimism peaked on the belief that the country was on the road to herd immunity and making a full recovery from the pandemic.

This result aligns with data from Diligent Institute’s Corporate Sentiment Tracker, an AI-powered tool which tracks the topics being discussed by corporate leaders in the news and whether the tone of these stories is positive or negative. At the time this report is being written, current overall sentiment is at 66 percent positive. 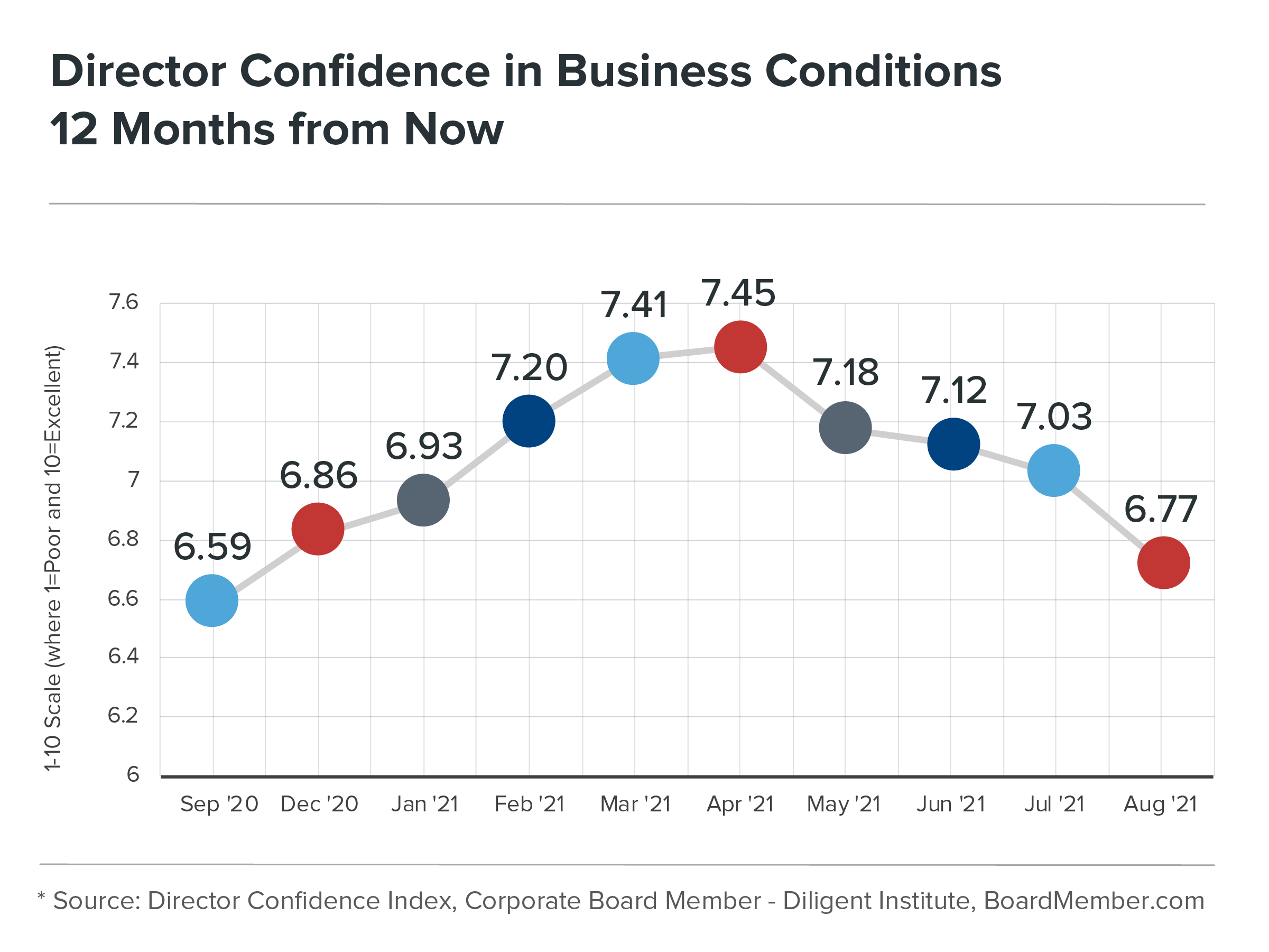 Directors’ assessment of the current business environment also declined according to our latest poll, down 8 percent to 6.8 out of 10. Both indicators are now at the same level, with a nearly even split between directors who expect conditions to worsen (37 percent) and those who forecast improvement (38 percent).

That is in line with CEOs’ forecasts, which declined again in September thanks to the same suite of concerns that are troubling directors. Still, according to polling by our sister publication Chief executive earlier this month, forty percent of CEOs expect conditions to improve compared to 34 percent who project they will worsen—26 percent say it will remain unchanged.

“Covid impact right now makes current business conditions not ideal—there are still many uncertainties in spending of customer companies,” says Jan Estep, director at ACI Worldwide and member of its audit, nom/gov and risk committees. “Covid is also impacting global travel, which affects sales,” she says, adding that future business conditions are, in her view, “not ideal, as my forecast is for stagnation—not a lot of growth, coupled with inflation.”

“Conditions are much improved from the recession of last year,” says Susan Fleming, director at RLI Corp. and Virtus Investment Partners, where she serves on the audit and governance committees, “but the Delta variant seems to be slowing down the recovery, with a lower GDP forecast for the balance of the year and employment growth slowing. On the bright side, it might lower the risk of inflation running away. So, while things are better, I don’t expect them to improve. Could get worse but hoping Delta will burn out or vaccinations will increase (call me optimistic!)”

Jim Hunt, director at Brown & Brown and a member of the audit committee, says he believes conditions will worsen from a 6 out of 10 to a 5/10 due to “ongoing considerations of the Covid-19 pandemic, the continued accommodative posture of the Federal Reserve and whether recent inflation is indeed transitory,” he says. “I also consider government policies regarding expanded government, taxation, income redistribution as I think about the future of business prosperity.”

Thomas Rochon, director at Tompkins Financial and member of the comp and nom/gov committees, is optimistic that conditions will improve to a 9 out of 10 by this time next year. He says while some sectors are still significantly affected by Covid-19 and labor shortages are affecting companies’ ability to meet demand, “longer term (e.g., one year out) new equilibria will be found and pent-up demand will be effectively met.”

George Corbin, director at Edgewell Personal Care and comp committee member, says “Covid variants and under-vaccination remain the single biggest spoiler in the economy… and company health. It is incumbent upon all boards to see clear evidence that management is building resilience for rapid pivot/adaptation into their controls, workforce, supply chain, and culture.”

The proportion of directors forecasting increases in revenues remained unchanged in August, at 92 percent. This is the second highest level on record since we began polling directors on the matter a year ago, in October 2020—only surpassed by one percentage point last April.

The proportion of directors who expect profitability to increase over the next 12 months ticked down slightly this month, to 84 percent—from 87 percent in July. Nevertheless, that number is 14 percent higher than it was when we started the year.

When asked about Capex projections, fewer directors this month say they’re expecting them to increase—52 percent vs. 59 percent last month, a decline of 12 percent. That’s the lowest proportion since January and a clear indication that companies are increasingly cautious amid all the uncertainty. 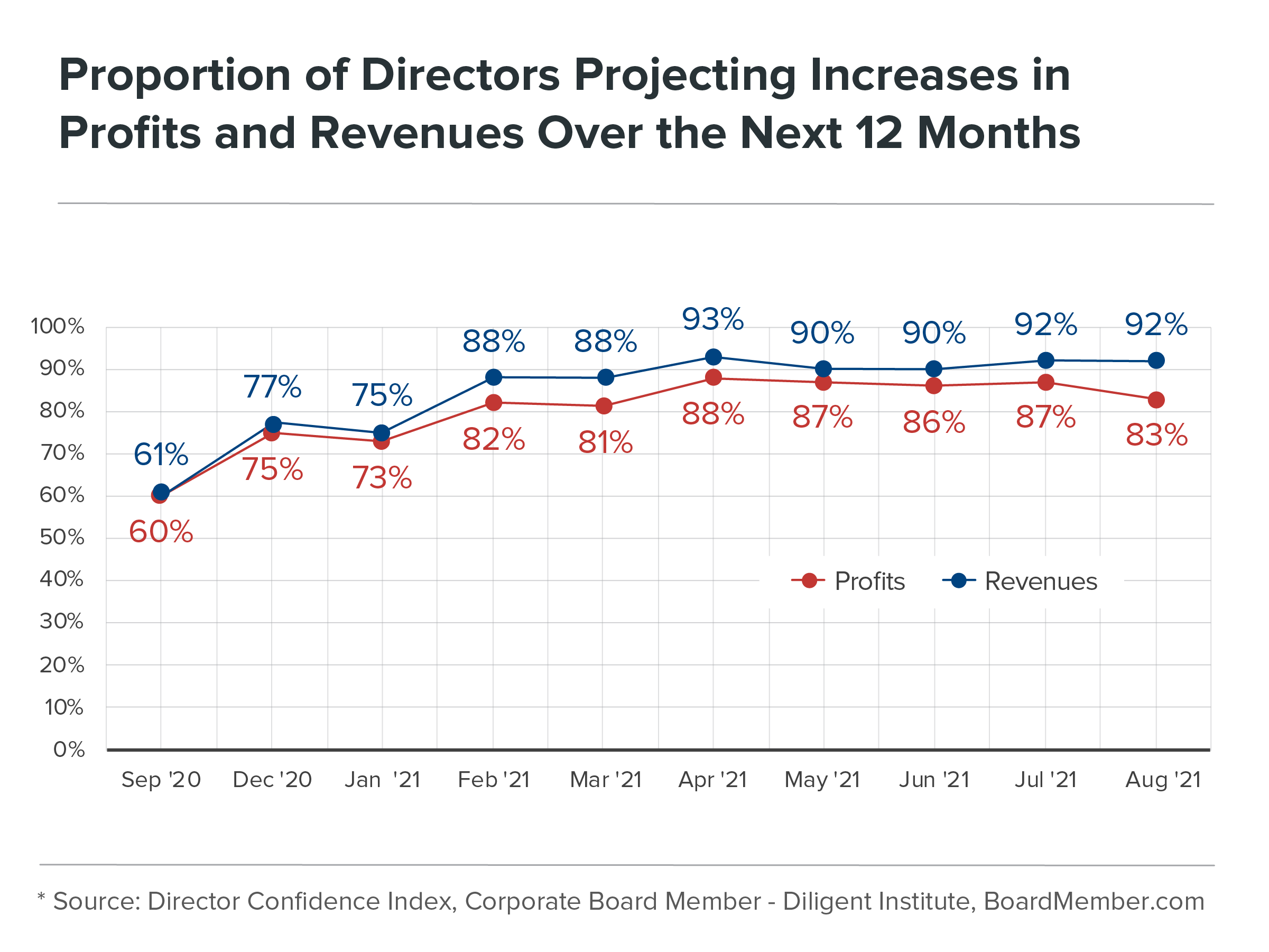 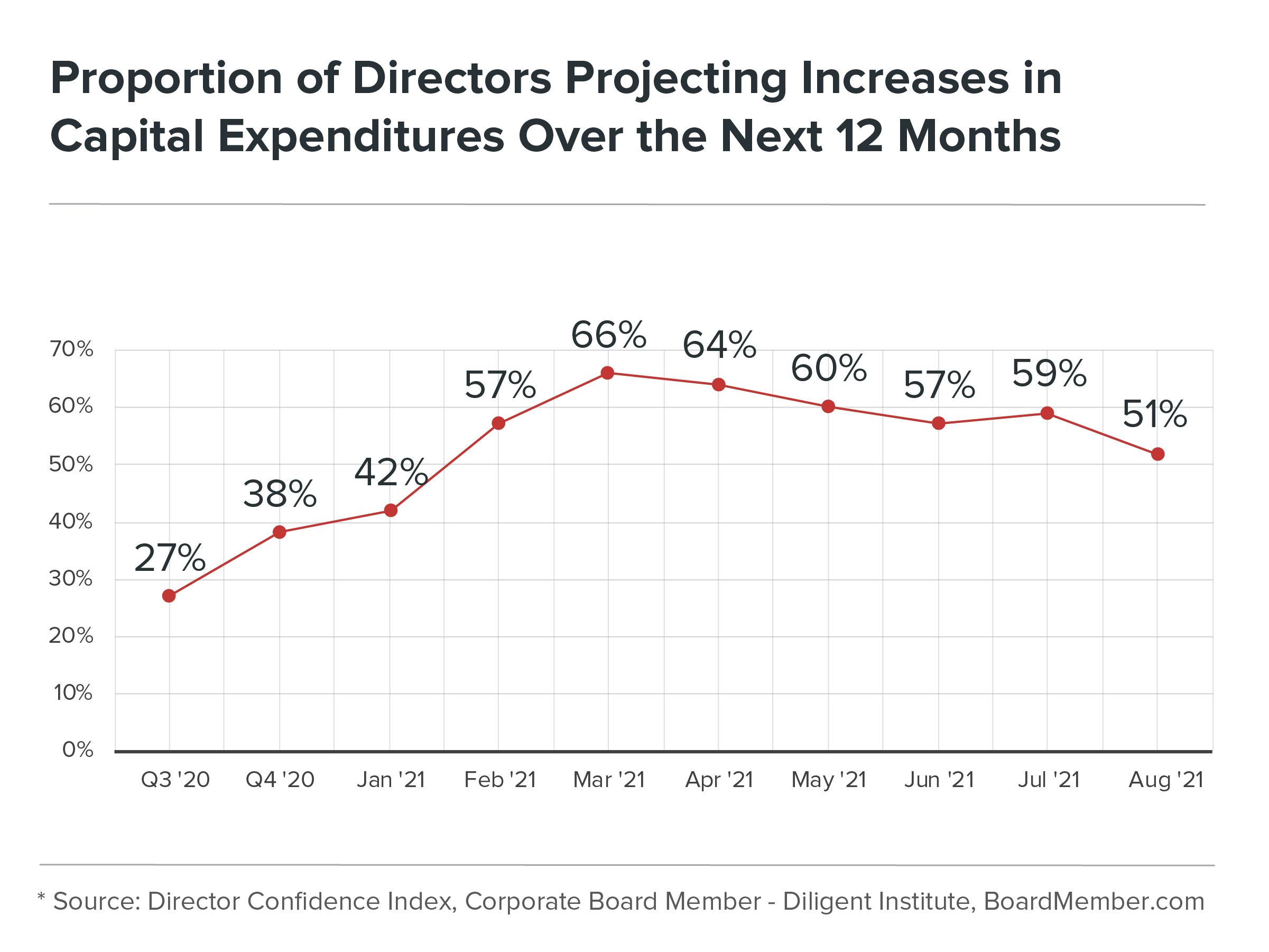 "What Directors Think:" A Sneak Peek

Corporate Board Member’s 19th annual “What Directors Think” survey, which takes the pulse of public company directors on the full spectrum of issues topping boardroom agendas, is currently fielding now through the end of September. So far, more than 200 board members have shared their perspective on topics as varied as the state of the economy and how it is affecting their industry, the push for enhanced ESG metrics and reporting, stakeholder activism, culture, compliance—and a whole lot more.

This year’s survey is again conducted in partnership with Diligent Institute, and we’re happy to share a sneak peak into some of the preliminary results. Here are some key findings so far:

Stay connected for the full coverage of the results of the survey in the first-quarter issue of Corporate Board Member magazine and a special digital report coming out in January. If you’re a public company board member and haven’t received your invitation to participate in the survey, or to receive a copy of the report when available, write to Research@ChiefExecutive.net.