A flash poll of public company board members conducted February 20-23, prior to the war on Ukraine, shows directors growing increasingly concerned over the impact of inflation on their company in the year ahead. At the same time—and perhaps related—their optimism in the improvement of business conditions a year from now has stalled and remains 14 percent below its spring 2021 high.

Those are the key findings of our March Director Confidence Index, conducted in partnership with the Diligent Institute. Our forward-looking index is now at 6.4, as measured on a 10-point scale where 10 is Excellent and 1 is Poor. That is on par with January levels but still well below levels reached last year at this time, when optimism peaked on the hopes of a return to normalcy by fall 2021.

Concerns over persistent inflation and rising interest rates, along with rising uncertainty in the global economy and geopolitical conflict, are fueling directors’ outlook for the year. Interestingly, however, directors report feeling more confident today than they’ve been since August in the current business landscape, a sign that easements in the supply chain and the end of COVID restrictions may be relieving the pressures that have been in place for the larger part of the past year.

According to the poll, directors rate current conditions a 6.9 out of 10, up 8 percent month-over-month and the highest it’s been since last July. Overall, their view of the current environment (again, pre-attacks on Ukraine) is 7 percent higher than their forecast for the future, which they say is due to fears that inflation, federal government policies and global politics will slow economic growth and stifle business activity. 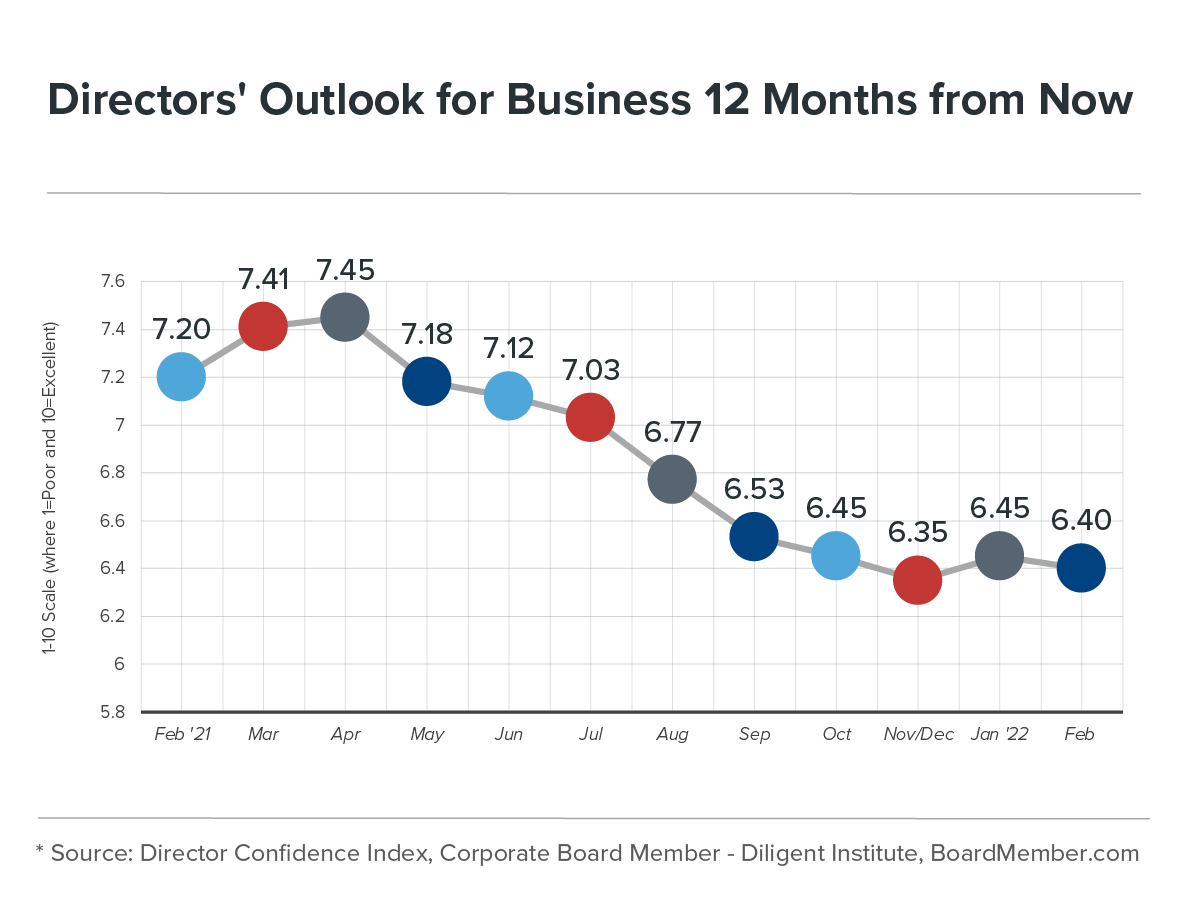 Talent is also playing a role in directors’ forecast: “The country will be impacted by continuing high rates of inflation and a sluggish response from reluctant workers returning slowly to the labor force,” said an independent director at a large healthcare provider who participated in our poll. Across all sectors, though, inflation is driving down the positive effect of potentially seeing the end of the pandemic soon.

An executive director at a banking company, who rates current conditions as an 8 but expects them to deteriorate to a 6 by this time next year, says his forecast is driven by “the rise in interest rates as we fight inflation and excess liquidity in marketplace.”

A director on the board of a global professional services firm shares a similar forecast due to “inflation, higher interest rates and not very good leadership in Washington along with bad behavior by Putin.”

CEOs also reported a drop in optimism when polled earlier in February. However, while their rating fell 5 percent to 6.6/10, it remains fairly in line with their outlook for the year, at 6.7, which means CEOs may be expecting more of a status quo in 2022, rather than the deterioration of conditions that directors are forecasting. In fact, only 22 percent of directors polled in February expect conditions to improve this year—down from 41 percent just one month prior. Three out of 10 forecast the status quo, with a near majority (48 percent) expecting things to get worse before they get better. 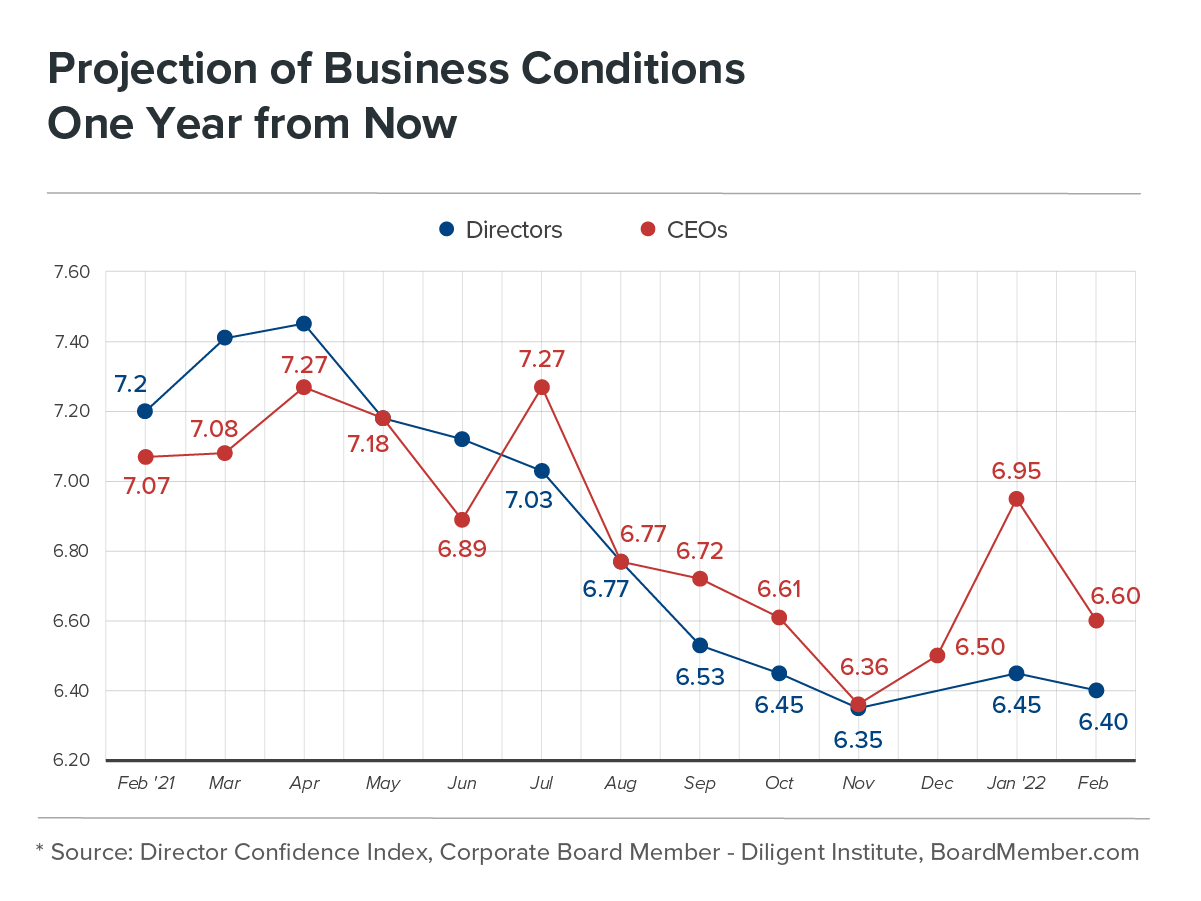 “I would be rating the conditions as excellent were it not for the constraints created by supply chain and labor issues,” said a director on the board of a construction company. “For us, the labor issues are mitigating because our turnover of associates with us more than a year is approximately 1 percent.” Many other directors echoed the sentiment that while labor and supply constraints remain a challenge, companies have been able to adapt. 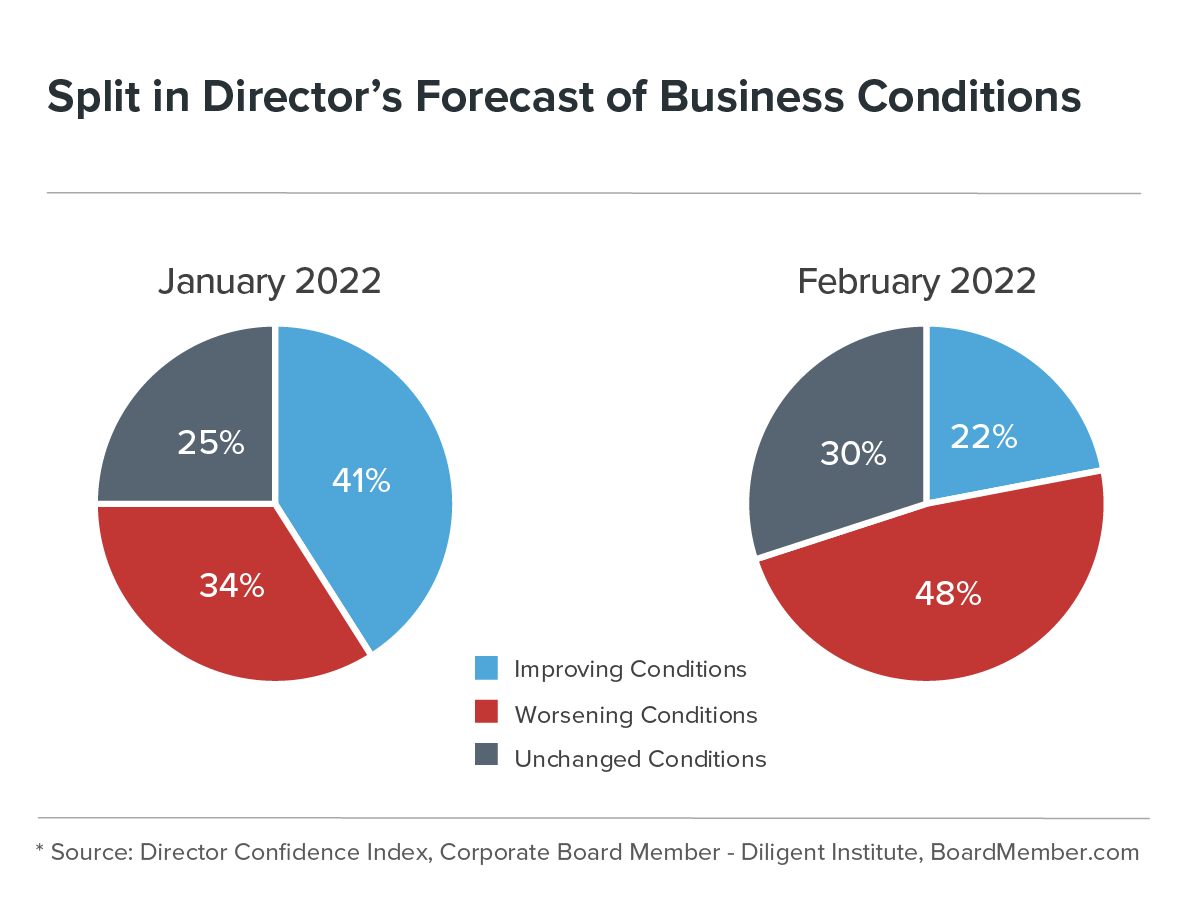 Seventy-eight percent of directors polled say that they are more concerned over the impact of inflation now than they were at the beginning of the year—and 21 percent report the same level of concern. The good news: 78 percent also say they believe their board is devoting enough time to discussing how the company can/will cope with rising inflation this year. 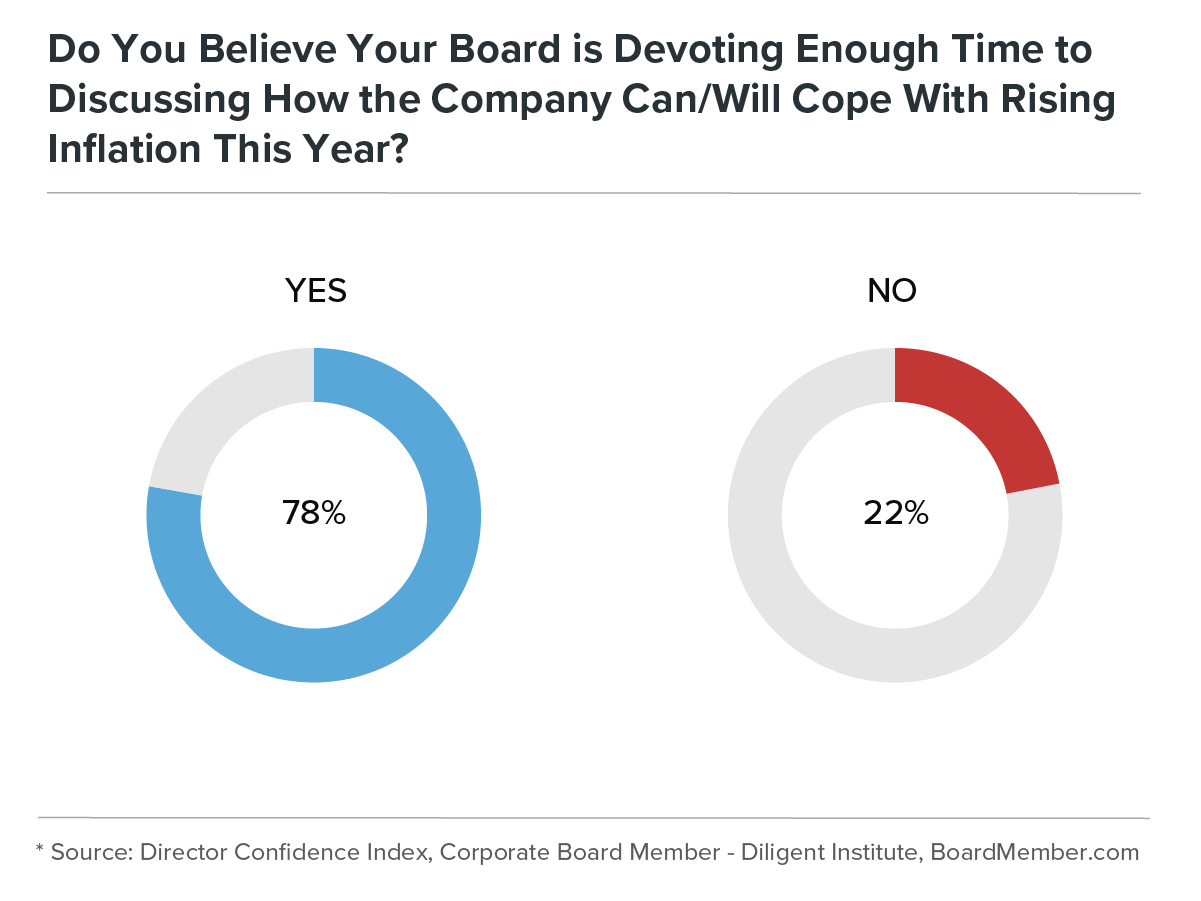 Overall, directors rate their confidence in their leadership team’s ability to manage through rising inflation a 4 out of 5, where 5 is “Very Confident.”

Against these headwinds, directors remain fairly optimistic in their revenue and profitability forecast for 2022. Fully three-quarters (75 percent) expect profits to increase, vs. 77 percent the month prior, and 83 percent forecast growing revenues, vs. 84 percent in January. 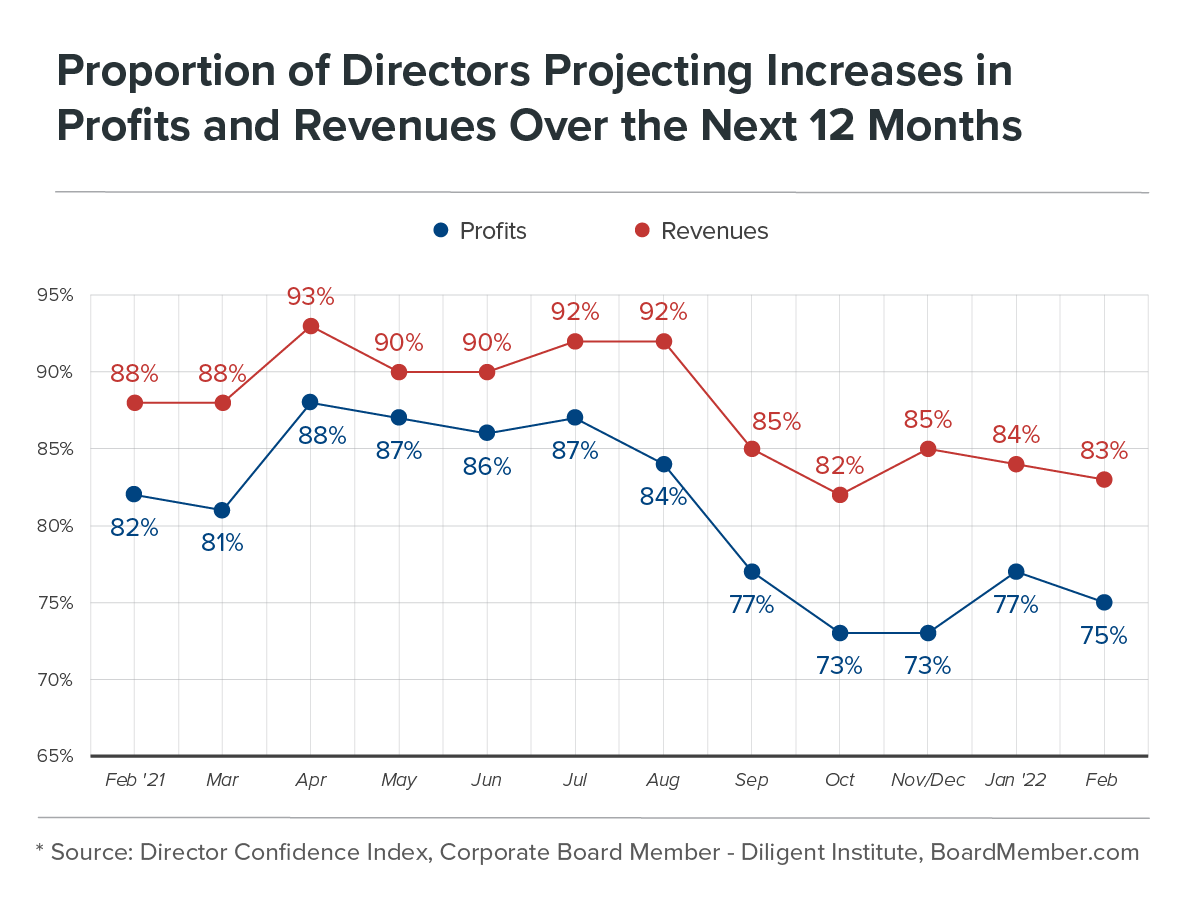 Where caution shines, however, is in the finding that 57 percent say they are likely to increase capital expenditures over the coming months—down 8 percent from 61 percent month-over-month. 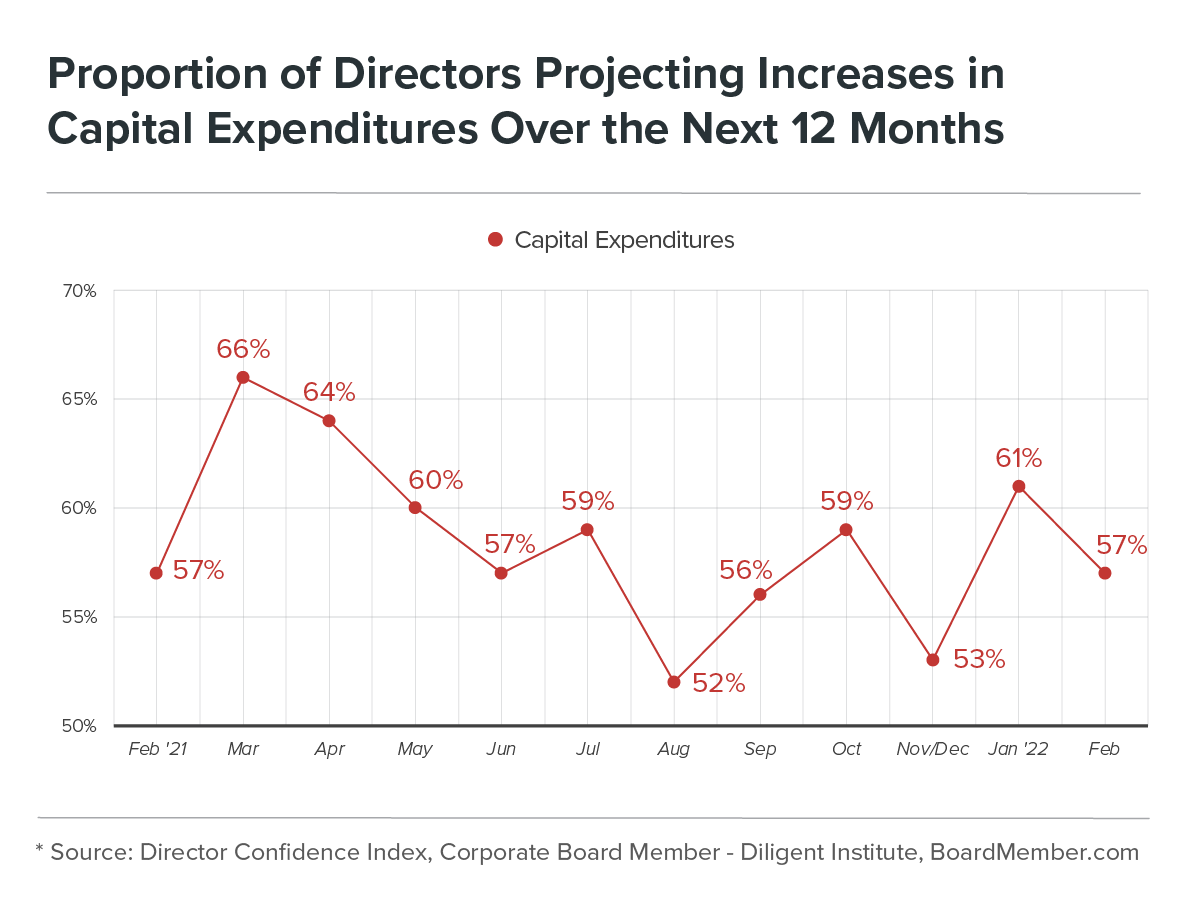