After two months of consecutive increases, our latest reading of director confidence shows optimism in the boardroom down 6 percent from early September, to 5.5 from 5.9. With that move, the leading indicator, which is measured on a 10-point scale where 10 is Excellent and 1 is Poor, has given back nearly all the gains made in July and August and is now 14 percent off where it started the year. Directors’ rating of current business conditions also declined, to 5.6 from 6.1 when we last polled them in late August/early September. That index is now at its lowest level in two years, when it registered 5.2 amid the presidential election turmoil of 2020.

Directors who were surveyed as part of our monthly Director Confidence Index, conducted between September 26 and October 7 in partnership with The Diligent Institute, say that when it comes to forecasting the business climate 12 months out, inflation, rising interest rates, trade policies, heightened geopolitical risks and continued supply disruptions are not setting the stage for much improvement—and the erratic patterns of the stock market aren’t helping calm concerns either.

The cost of capital and energy prices are also fueling uncertainty among corporate directors, alongside a still-bare labor market. Overall, 41 percent of the 110 public company directors
polled forecast worsening business conditions over the course of the next 12 months, vs. 32 percent who expect them to improve. Those numbers are unchanged since our last polling, but they have improved significantly since earlier this year: In April, 61 percent said they expected conditions to be worse by the spring of 2023, which either means directors are revising their forecast upward or that they expect the worst to be over by the fall of 2023. Adam Crescenzi, member of the Clough Global Opportunities Fund board, is among those who believe we should be past the bottom by the end of 2023. “Inflation will be reduced, and we will have full employment,” he said, forecasting revenues to be up by more than 20 percent by
then. 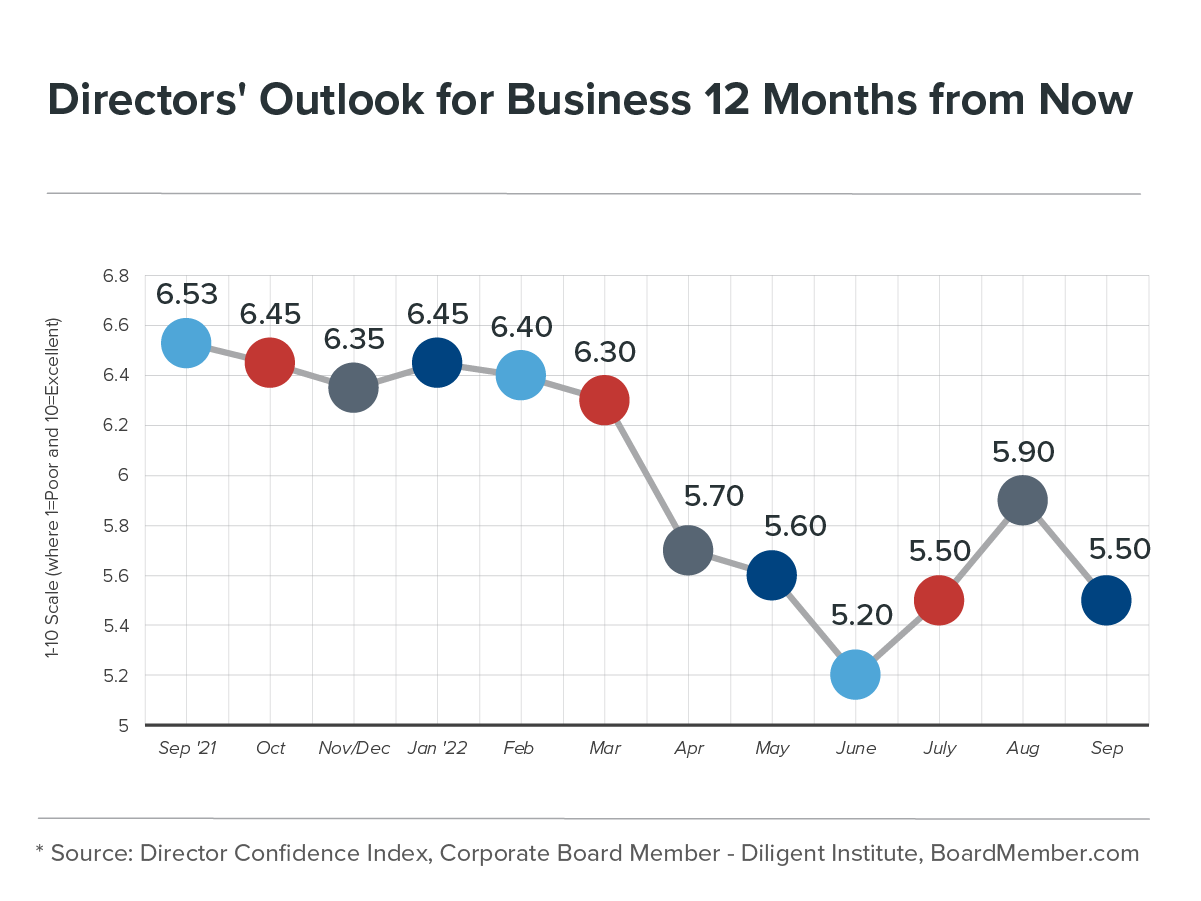 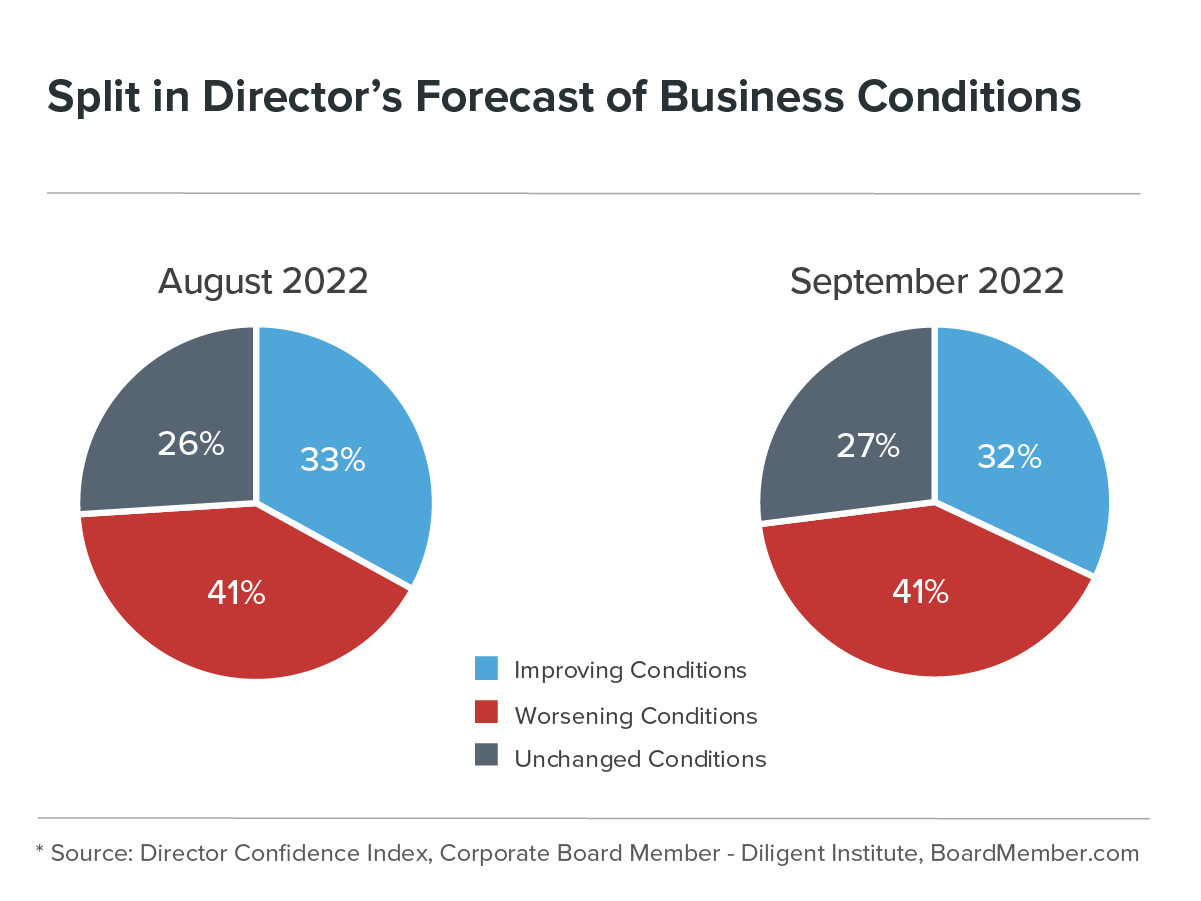 For the time being, however, directors say they’re keeping a close watch on the Fed’s actions and their impact on business. To some, the central bank is making the right calls to steady the ship, while to others, it’s either too little too late or too much at once. “Federal Reserve actions will dampen the economy,” said David Morgan, audit chair for Nasdaq-traded IT service management company i3 Verticals. He nevertheless rates current conditions a 9 out of 10—and forecasts them to only drop to an 8 by this time next year. “Inflation will not be tamed by the current approach,” said Phil Garfinkle, CEO of AR startup NewSight Reality who serves on the board of Virginia-based MSP WidePoint Corporation. “Our federal government is on a very concerning path.” He rates current conditions a 6 but forecasts them to fall to a 2, partly due to a tough labor market, he said.

“With inflation continuing at a rapid pace and the Fed committed to bringing it down, I am now skeptical that we/ they can achieve a soft landing for the economy,” said Susan Fleming who serves on the boards of RLI Corp and Virtus Investment Partners. “The combination of inflation and recession on the horizon are causing my dampened outlook for the economy in
the next few years,” echoed Lydia Beebe, chair of energy company EQT Corporation. “For the largest company on whose board I sit, the current outlook is clouded by inflation worries and the possibilities of economic downturn,” said Cathy Minehan, former president and CEO of the Federal Reserve Bank of Boston and a director at Visa and Bright Horizons Family Solutions. “Geopolitical concerns like the war in Ukraine don’t help.

When asked to share their forecast for how this environment is affecting their individual companies, 26 percent said they expected profits to be down by this time next year— compared to 18 percent who said the same just one month ago—and 23 percent said revenues would also be down— compared to 14 percent the month prior. “Market forces are negatively impacting consumers, lowering revenue growth. Inflation is impacting costs of products and capital. Cost containment/reductions are being assessed by most organizations. Forecasts for remained of
‘22 and ‘23 are being reassessed,” said Lou Miramontes, who chairs the audit committee at Rite Aid. “Time for management teams and boards to focus on actions needed to address current circumstances and be position the organization for recovery in ‘24.” When looking at those expecting profits and revenues to increase, we find 54 and 63 percent of directors, respectively, forecast improvements in those areas, down double digits from 64 and 73 percent in our last polling. The situation is similar for capital expenditures: 20 percent of directors don’t expect their company to increase capex in the year ahead—vs. 19 percent last month. The majority (51 percent) say they’re staying the course for the time being. As one director put it: “Caution is the mindset now — slow and steady.” 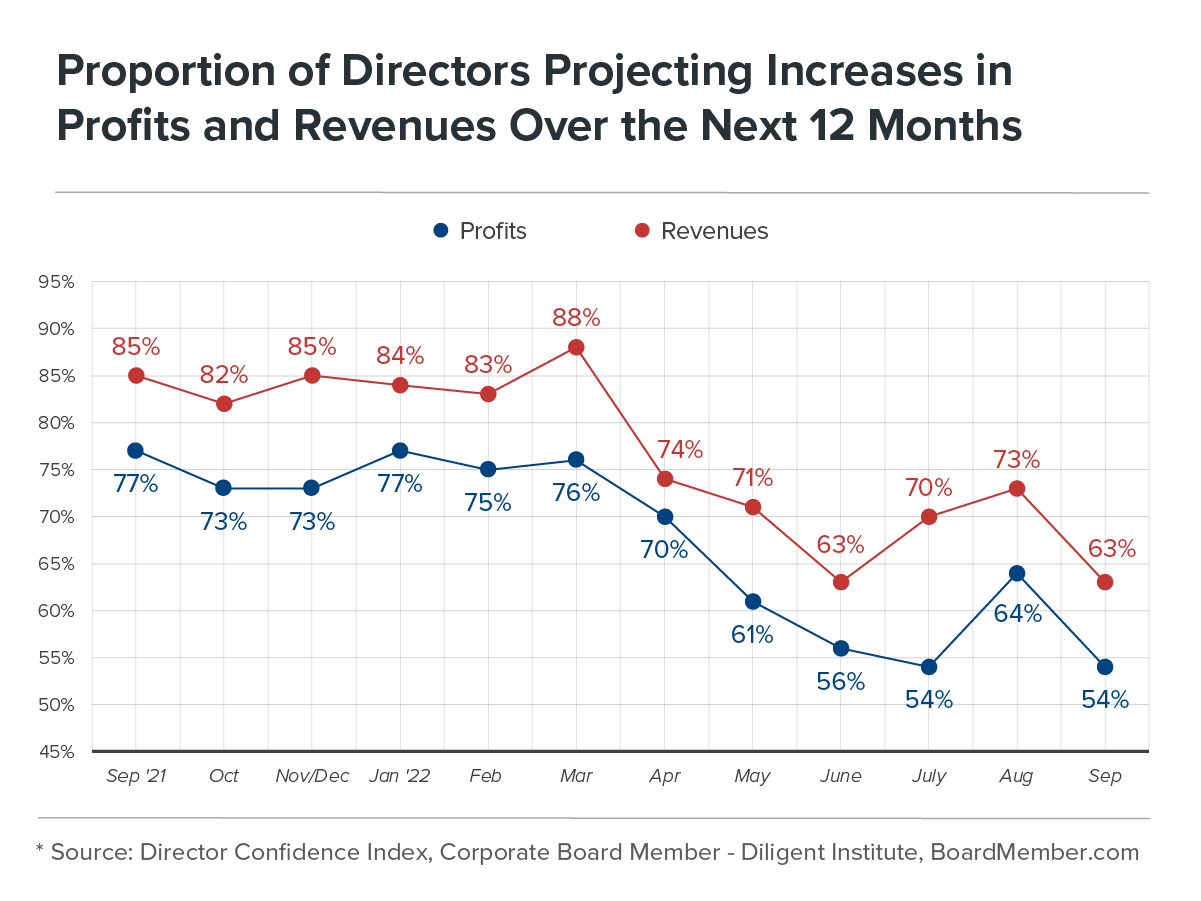 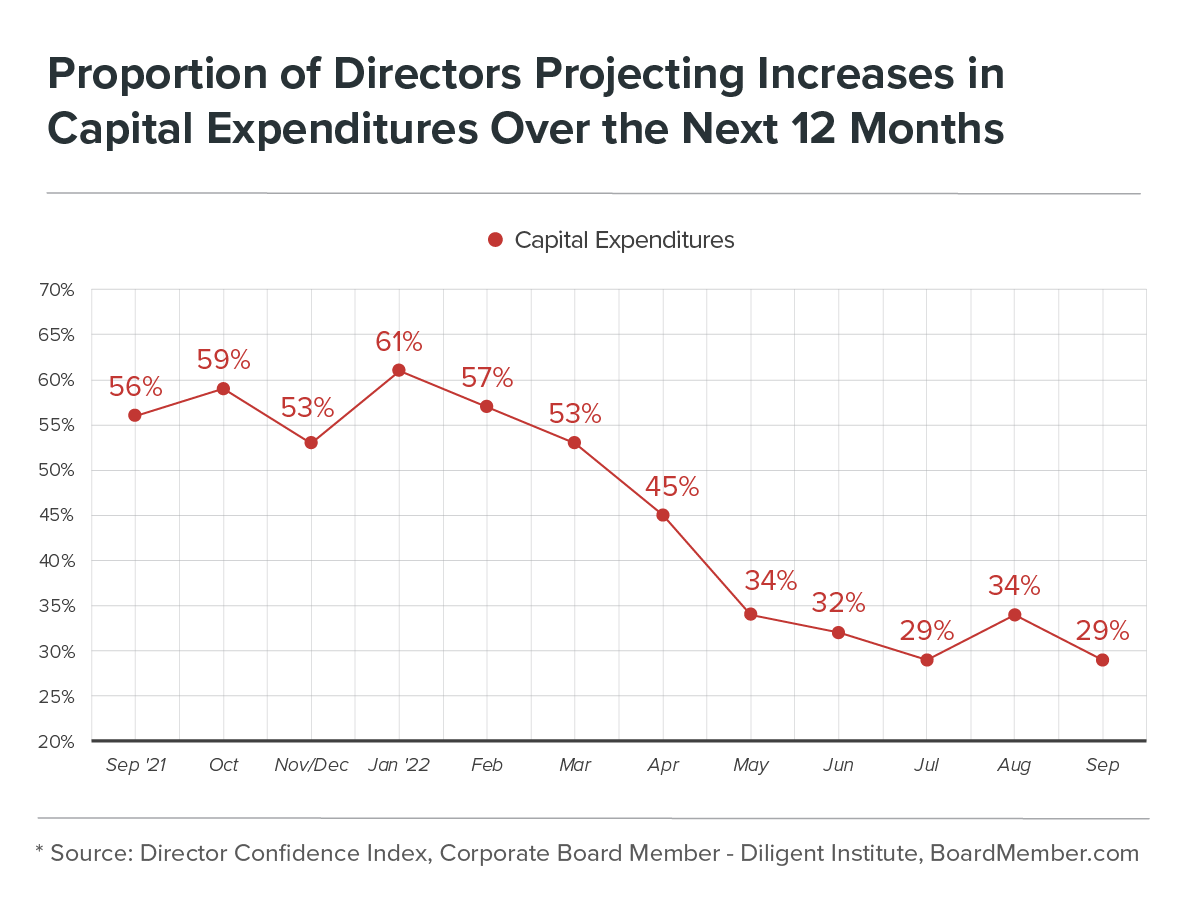