According to the White House, the U.S. is not going into recession. According to Thursday’s GDP figures we are already in one—at least technically.

Ask America’s public company directors what they think is going on, as we did in the days just before the Commerce Department announced the U.S. economy shrank for two consecutive quarters, and you’ll hear something a little different, something we haven’t heard in a while: hope.

While some 44 percent of directors polled in late July, by Corporate Board Members predicted a recession in the next 3 to 6 months, up from 40 percent in June, and another 42 percent projected at least a slowdown, our latest Director Confidence Index, conducted in partnership with the Diligent Institute, finds the first increase in optimism about where the economy will be a year down the road that we’ve seen in the last seven months of polling.

The leading indicator is up 4 percent in July as directors report some improvement in the supply chain, persistently strong demand and a certain stabilization of inflation, birthing some green shoots of hope that we may be nearing the bottom of the current economic crisis.

By breaking its downward trend and rising from 5.2 in June to 5.5 in July (measured on a 10-point scale where 10 is Excellent and 1 is Poor), the Index avoided falling into “Weak” territory (level 4 reading according to the scale points). 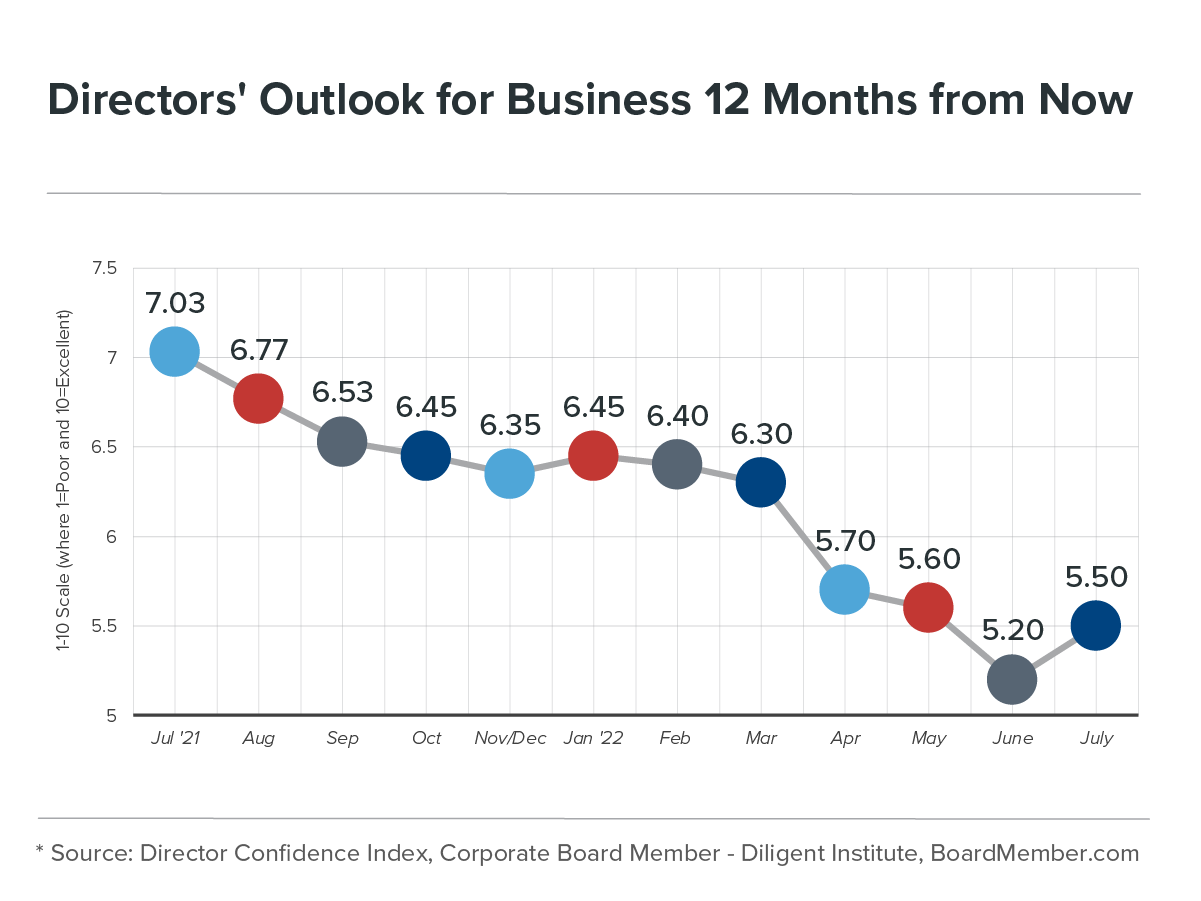 “U.S. spending shift to services and away from goods will result in inflation modulating,” said a director on the board of a semiconductor manufacturing company forecasting improvements in the months ahead. “I expect the Fed to manage a soft landing of the economy and the Russian invasion of the Ukraine to come to a conclusion.”

“The wall of worry on geopolitical [risks] will be lessened, and the Fed will have completed their hikes,” said an independent director on the board of a medical device company when asked to explain his optimism for the next 12 months.

To be sure, a single month of increasing optimism is not yet evidence of a trend. Many of the directors we surveyed said demand is strong and they expect it to remain that way, driving inflation higher, despite the Fed’s best attempt to curb it. For them, a continued run of strong rate rises by the Fed like the three-quarter point increase that came out of this week’s FOMC meeting is fueling doubt about the future.

“It’s so easy to overdo and trigger a recession,” said a director in the real estate sector. “Bank earnings recently are signaling trouble ahead in a number of key economic sectors, especially housing.”

Indeed, despite the uptick in our July Index, forecasts for what’s to come for business remain gloomy overall, with 56 percent of the 131 public company board members participating in the survey—conducted July 18-22—saying they expect conditions to be worse by this time next year—up from 52 percent in June. Only 20 percent anticipate things will improve over the next 12 months. 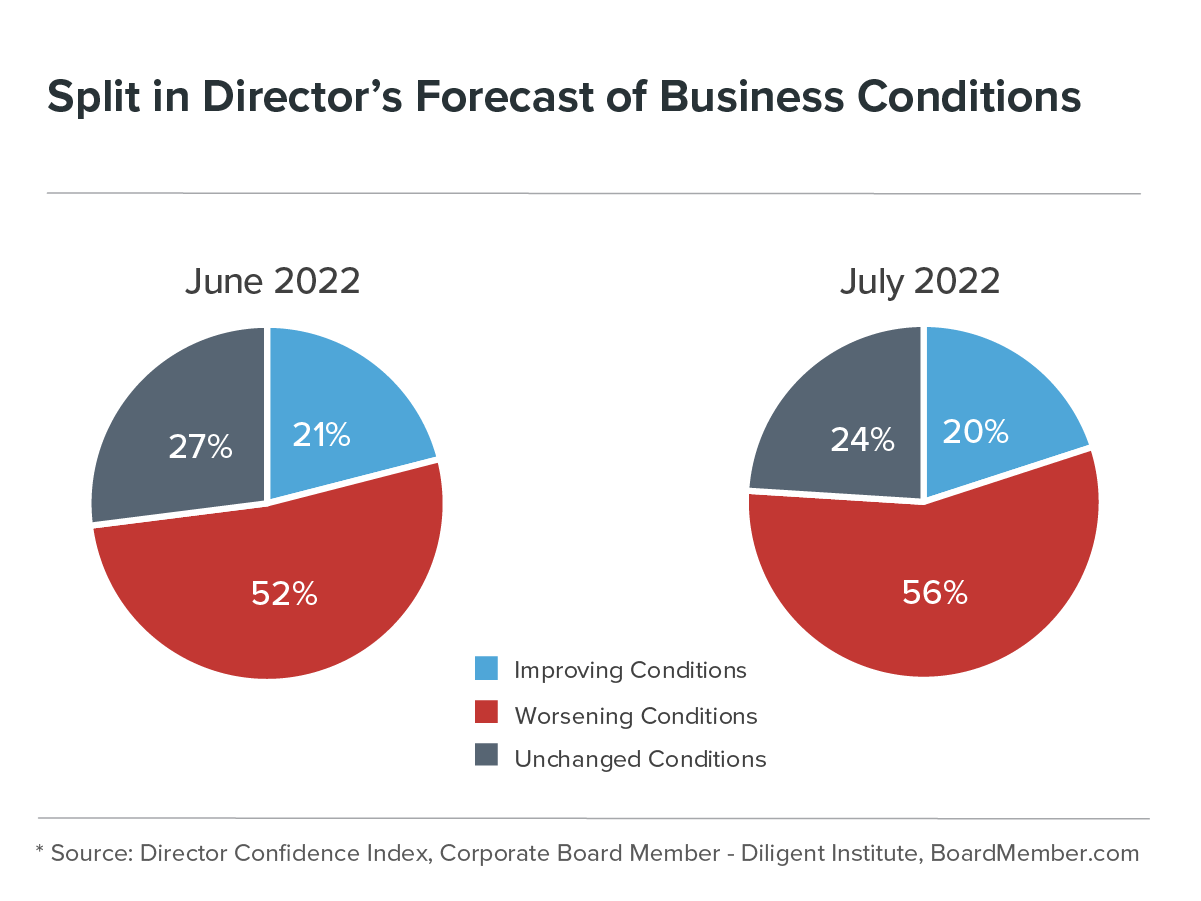 “Macroeconomic conditions are putting headwinds into economies and available capital for investment in businesses,” said a healthcare company director, adding that “challenges in supply chain continue to cause constraints.”

Labor also remains a source of concern for board members, as companies continue to struggle with the paucity of skilled labor. Overall, 20 percent of directors participating in the July survey listed various forms of staffing challenges as factors affecting business.

“The spiral caused by wage increases (already implemented) and its effect on product prices—and the ‘gap’ that will exist” are among the reasons a director who sits on the board of multiple publicly traded companies is forecasting deteriorating conditions in the months ahead.

“Human resources remain very tight, and now with less capability of paying up for talent,” said the director of a NASDAQ-listed manufacturer of consumer products, adding that the increased cost of capital is another pressure in that equation. 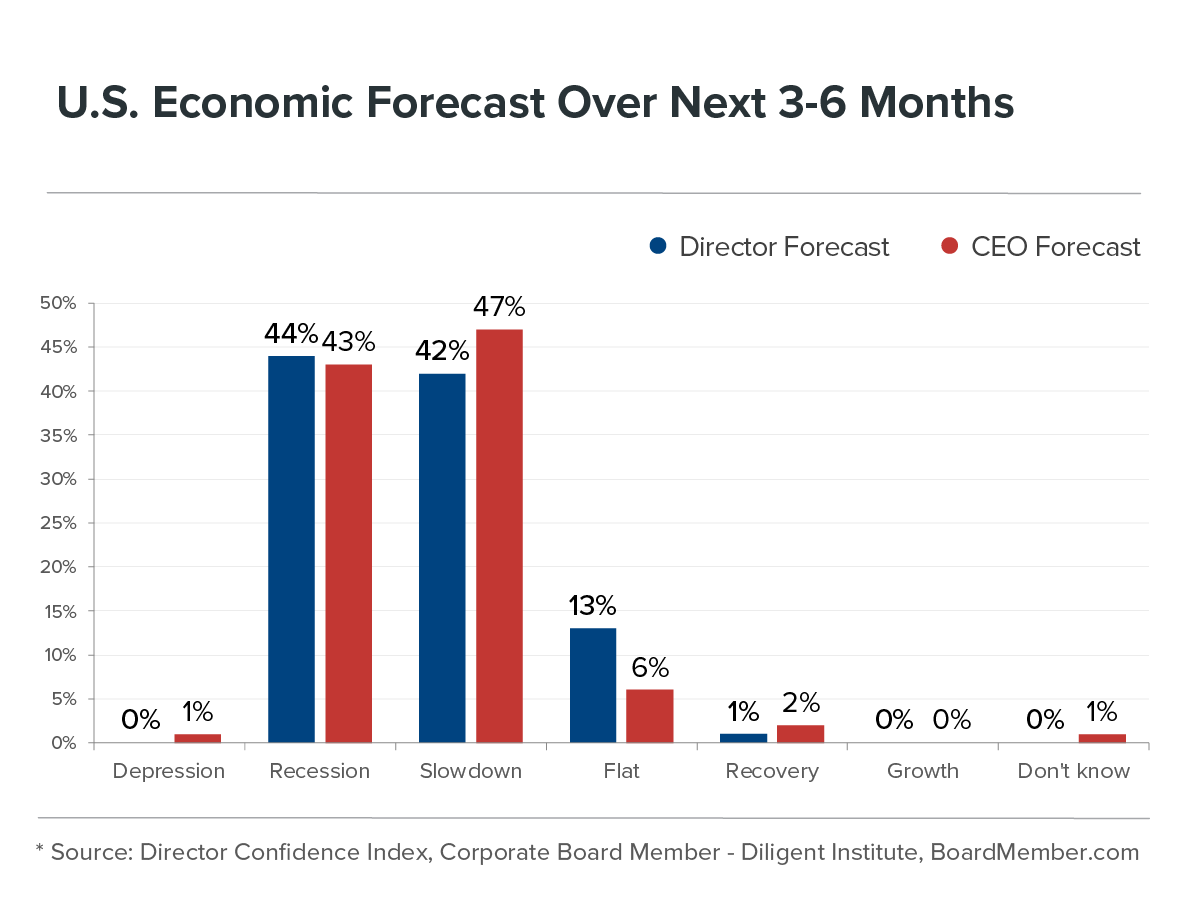 This aligns with results out of the Corporate Sentiment Tracker, Diligent Institute’s news-scraping tool which monitors the topics being discussed the most frequently by corporate leaders. At the time this report is being written, the top three terms being used by corporate leaders in the news are “recession,” “inflation” and “growth,” in that order.

To address today’s economic challenges, 42 percent of the directors polled said their board companies were increasing prices, and 30 percent said they were speeding up automation/digital transformation. Shifting focus to customer retention—the top strategy among CEOs—was only supported by 11 percent of board members.

Among other strategies were debt reduction (27 percent), workforce reductions (25 percent) and reducing travel/expenses (23 percent). 10 percent said they were opting for the status quo for the time being. 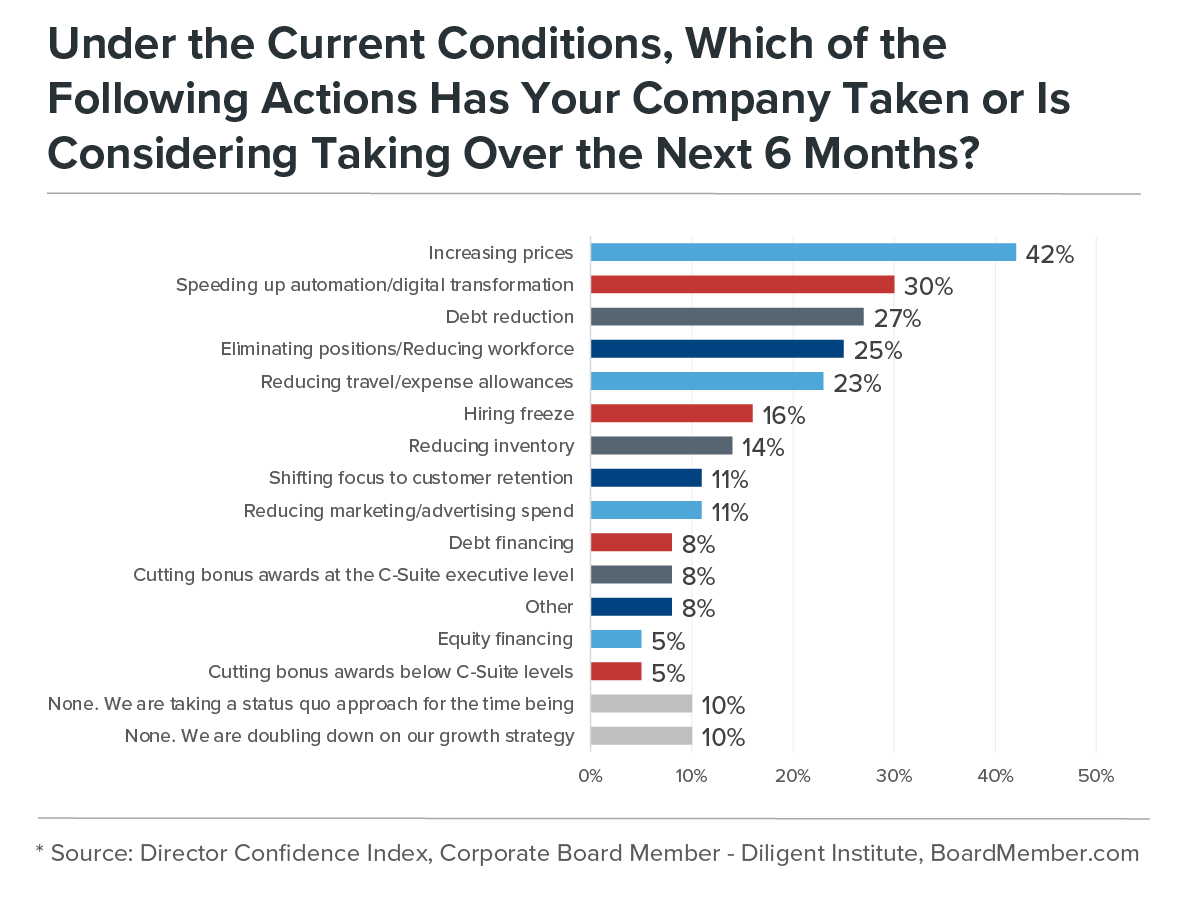 Against this backdrop, the proportion of directors forecasting increases in profits over the next 12 months continued to decline for the fourth consecutive month, to 54 percent from 56 percent in June. The proportion anticipating increasing revenue during that period, however, rose 11 percent month-over-month, to 70 percent—most likely as a result of increasing prices.

Only 29 percent of directors are forecasting increases in capital expenditures over the coming year, down from 32 percent in June—and from 61 percent at the beginning of the year. 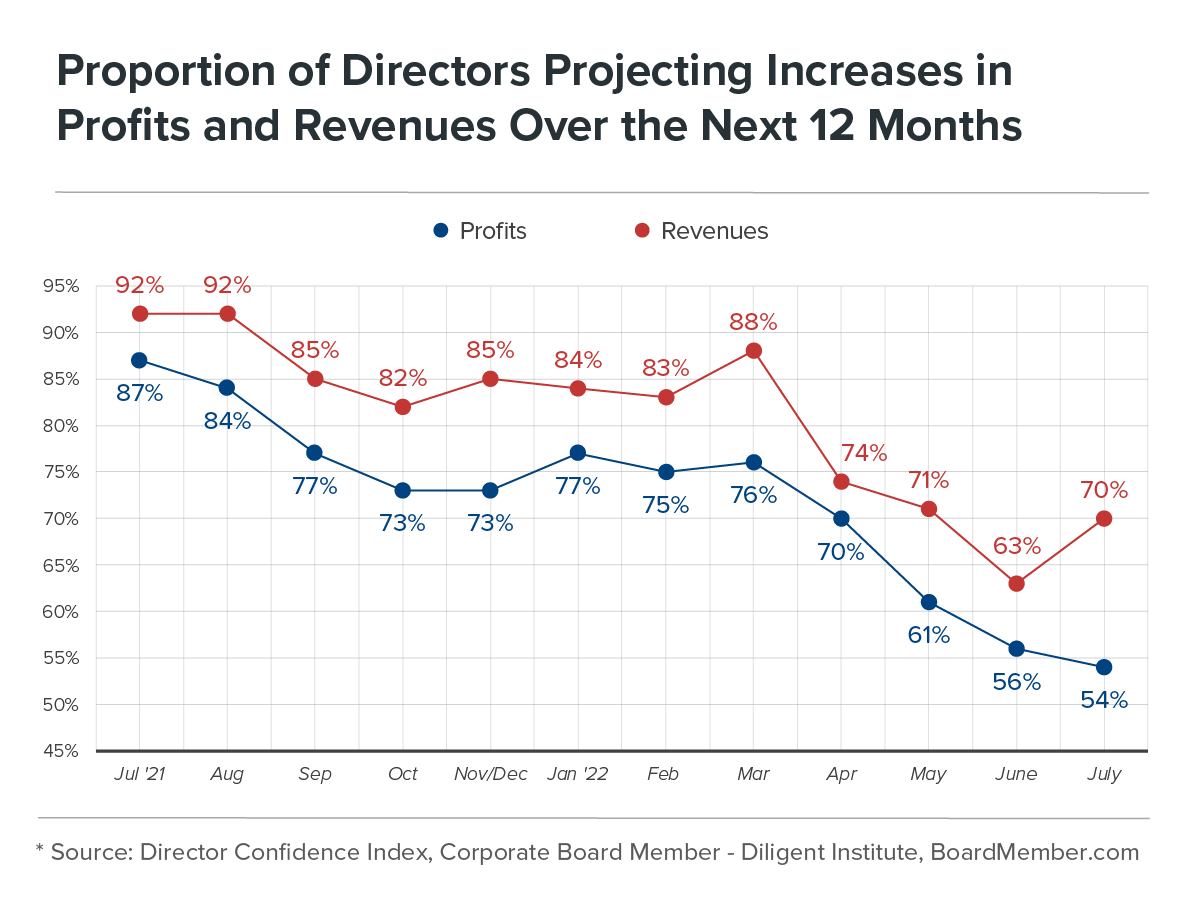 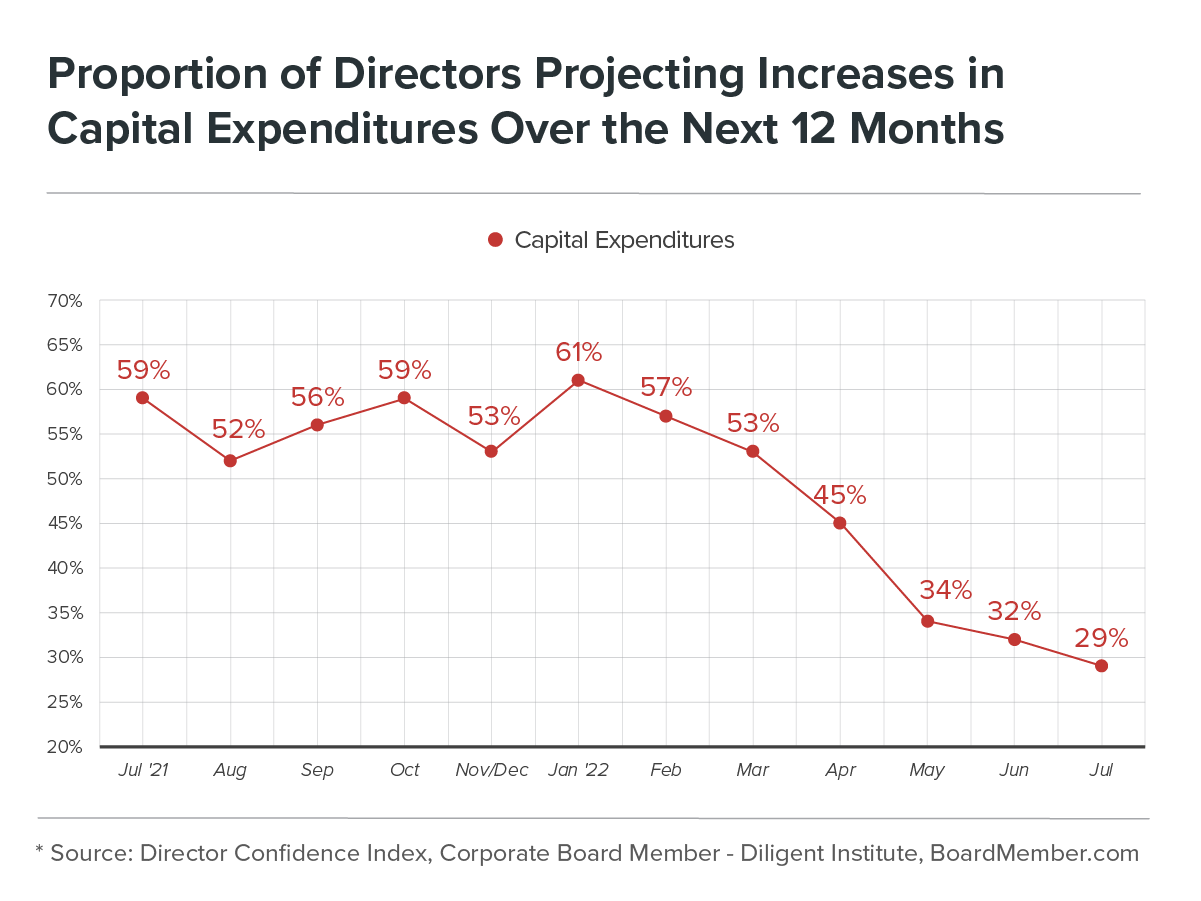