Directors’ outlook for the economy in the U.S. declined in June for a second consecutive month and is now lower than it was before the general release of Covid-19 vaccines to the public. Potential corporate tax increases, inflationary pressures and the ongoing labor shortage are the primary reasons a growing number of board members surveyed said they now expect business conditions to worsen over the next 12 months.

Those are the key findings from our June Director Confidence Index, a poll of U.S. public company board members conducted in partnership between Corporate Board Member and Diligent Institute. Our leading indicator dipped further in June, to 7.1 out of 10 on our 10-point scale, from 7.2 in May and 7.5 in April. Directors are far from alone in this opinion: CEOs also lost confidence in future business conditions in May and June, as reported by our sister publication, Chief Executive, earlier this month.

The DCI is now lower than it was in February, when the Covid-19 vaccines were first becoming broadly available. The lifting of Covid restrictions and reopening of businesses are keeping director sentiment in the “very good” territory, despite concerns about potentially unfavorable changes to tax policy, inflation and supply and labor shortages, according to the 109 public company board members polled June 13-16.

Director sentiment about current business conditions gained 6 percent since May, to 7.4/10 from 7/10. That is 6 percent higher than CEO sentiment (6.9/10), which has remained flat since April. 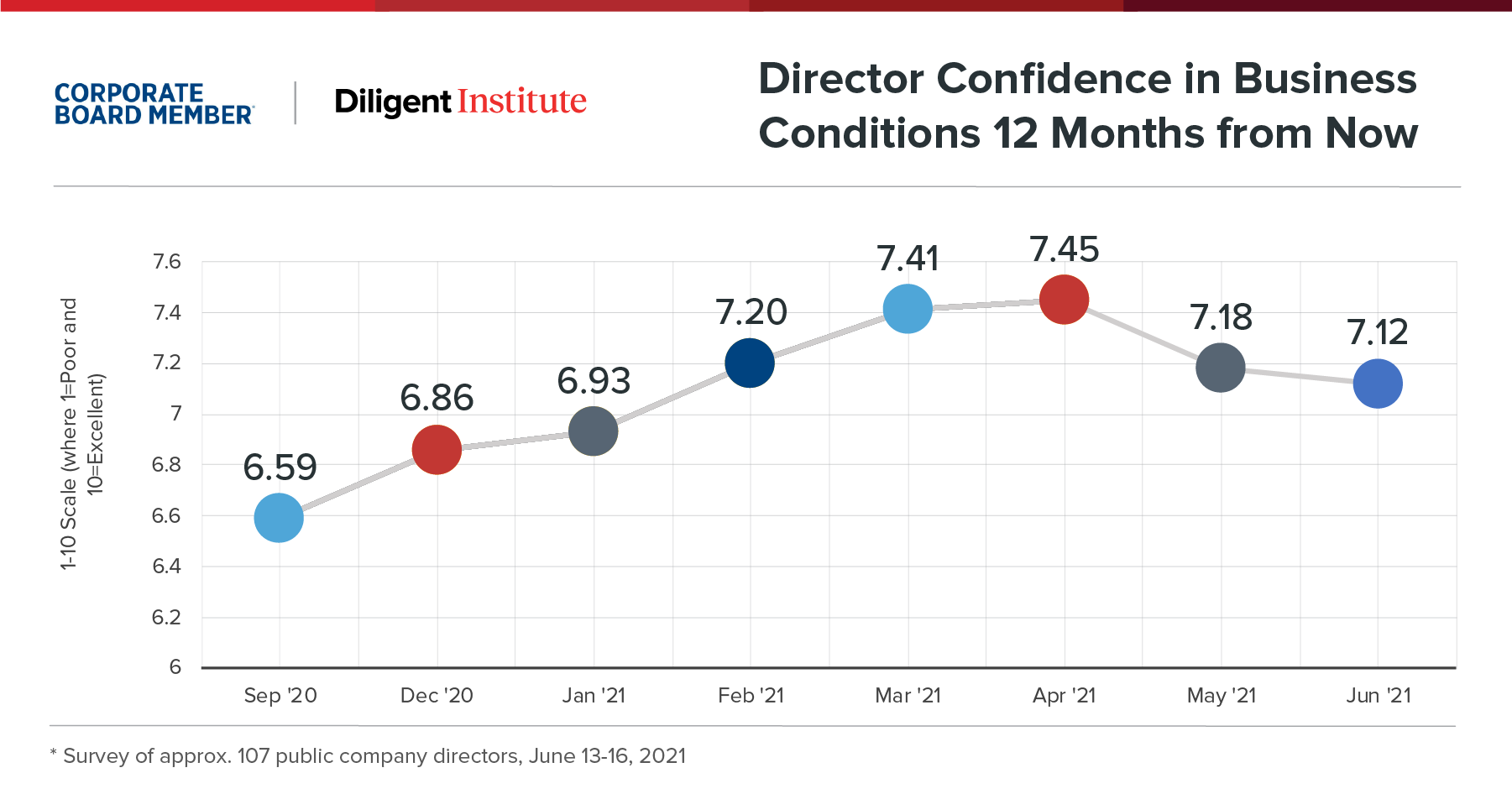 Shaun Burke, executive director at Guaranty Federal Bancshares, expects business conditions by this time next year to have deteriorated from a 7/10 to a 5/10. He says “inflation, regulatory burden and ineffective government leadership will have an increasing drag on the recovery.”

Although Scott Pancoast, director at pharmaceutical company DermTech, expects conditions to improve slightly from 5/10 to 6/10, he agrees that taxes, inflation and government spending “will return with a vengeance, further tempering growth.”

Chris Harned, finance committee chair at marketing firm Quad, says current consumer confidence and the overall economic recovery will be “tempered by inflationary and political concerns.” He is among the 24 percent of respondents who expect conditions to remain unchanged over the next 12 months.

A growing proportion of directors, however, now project conditions to worsen: 40 percent of polled board members in June predicted deteriorating conditions by June 2022, compared to 15 percent at the beginning of the year.

Inflation concerns are also reflected in Diligent Institute’s Corporate Sentiment Tracker, which lists “inflation” as the top term being discussed by corporate leaders in the news over the last week. Additionally, scores for the terms “growth” and “future” have begun to trend negatively over the last 90 days, meaning that corporate leaders are discussing these topics in more negative terms. 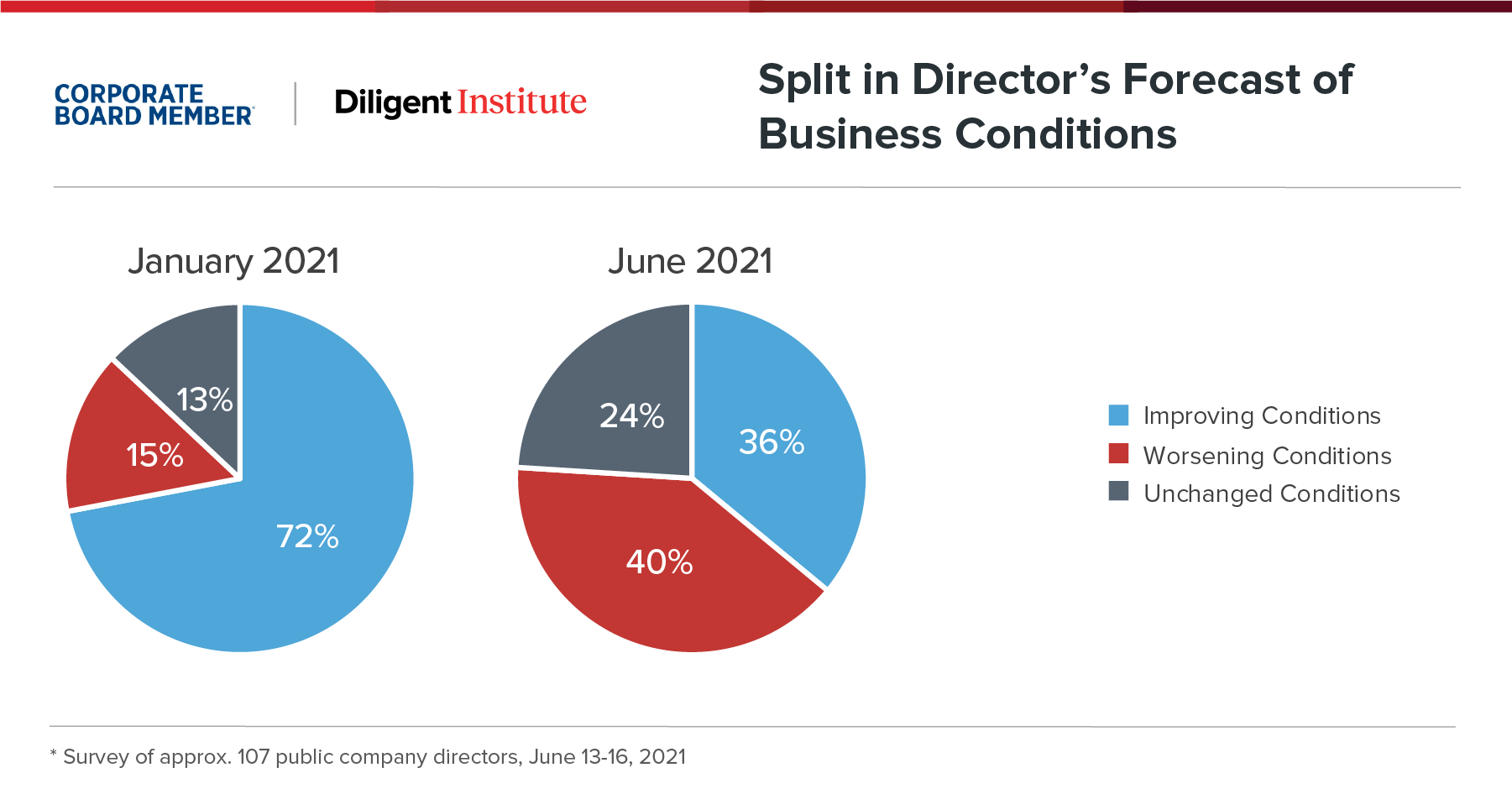 Amid these increasingly cautious projections for the year ahead, the proportion of directors forecasting increases in revenue and profits remained steady, at 90 percent and 86 percent respectively—from 90 and 87 percent in May. By contrast, 82 of CEOs we polled this month predicted revenues would rise in the coming year, and 74 percent expected their profits to increase. 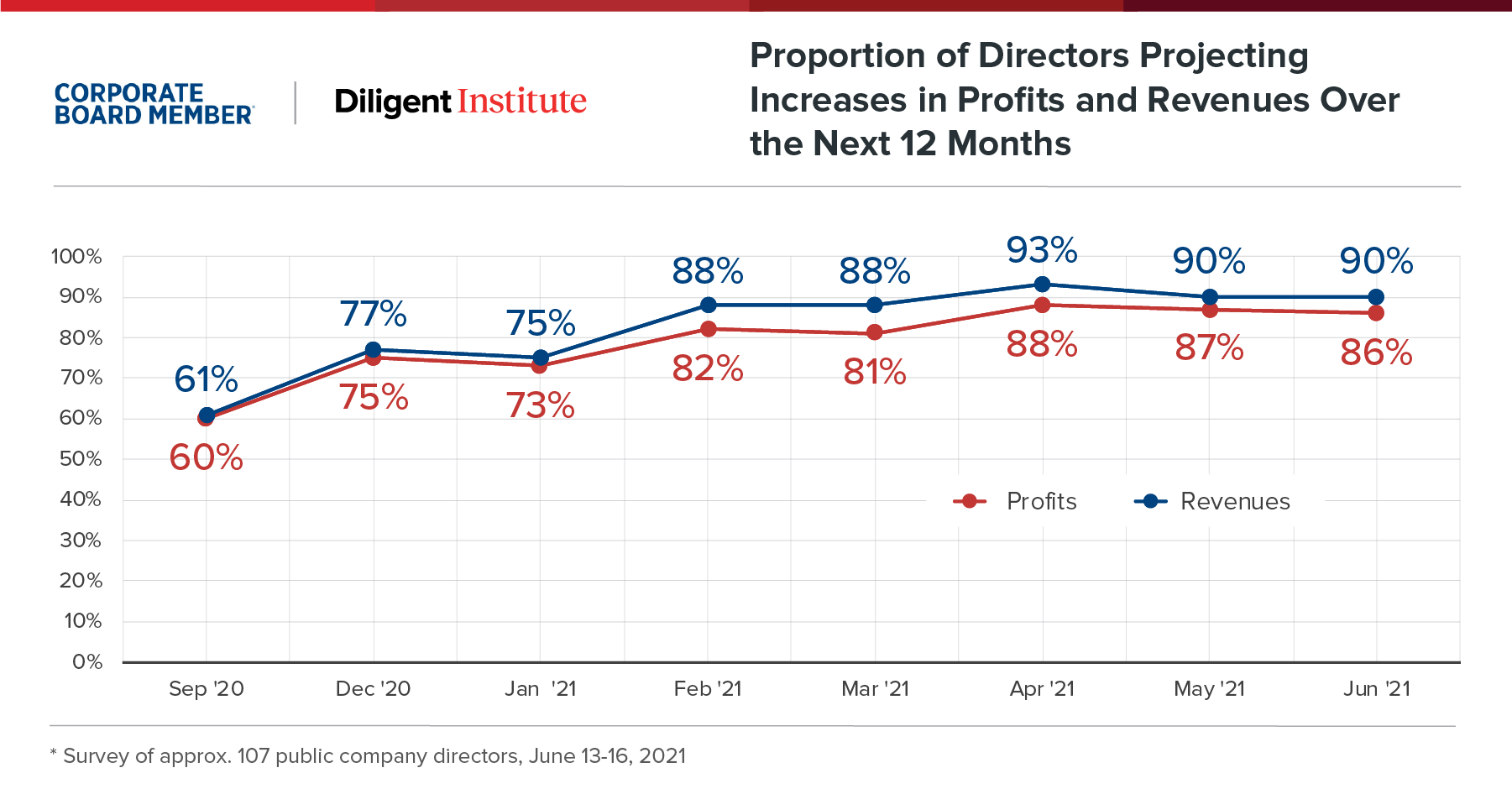 The proportion of directors forecasting increases in capital expenditures dropped to 57 percent from 60 percent the month prior. 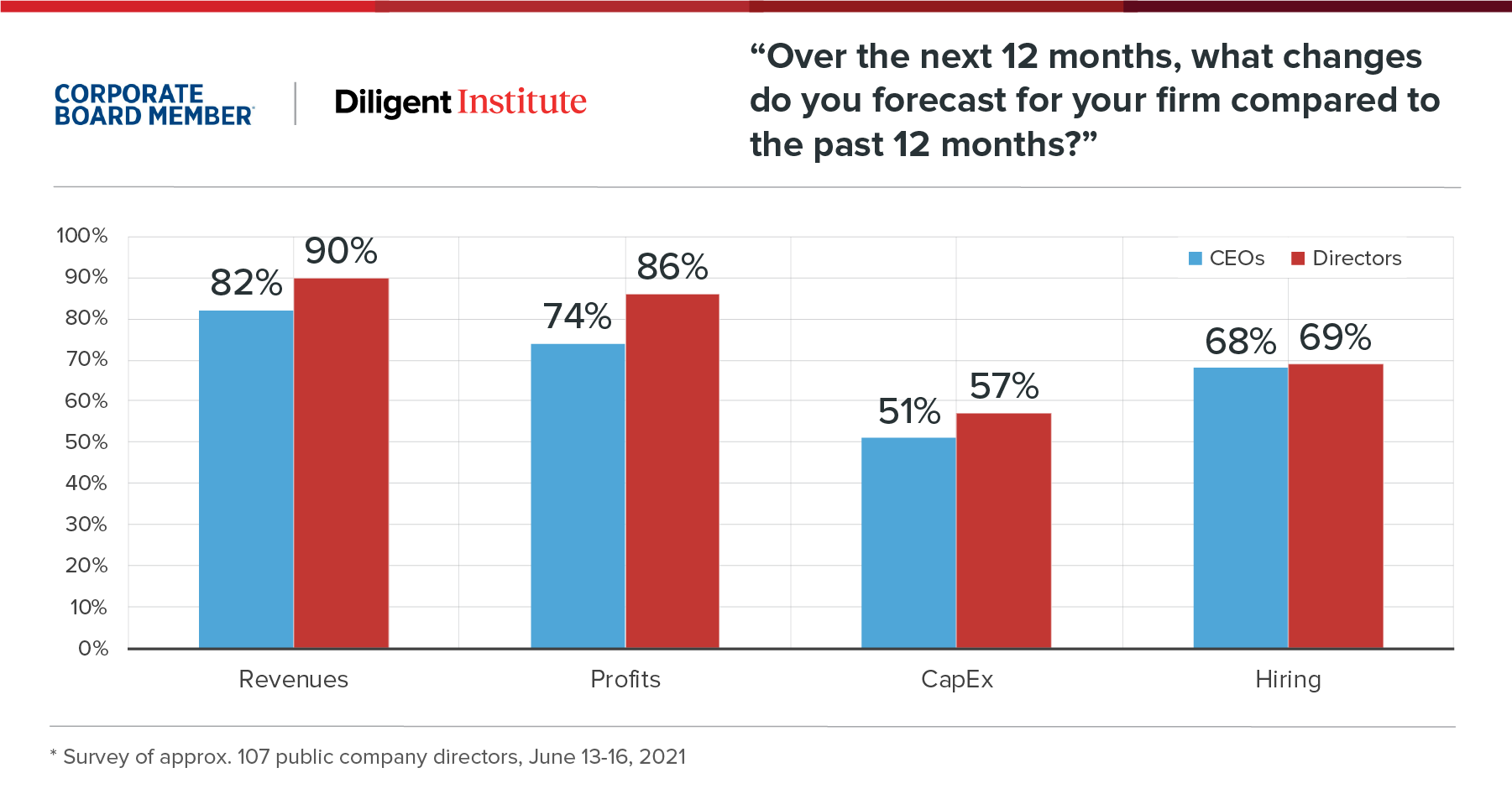 Looking at director sentiment by sector, forecasts varied from 6.7/10 in consumer staples to 7.8/10 in healthcare. The largest month-over-month change was in the technology sector, where director confidence fell 11 percent from 8.1/10 in May to 7.2/10 in June on concerns surrounding the imbalance in supply and demand both for labor and materials.

The largest gain was in the industrials sector, where confidence improved by 8 percent, from 6.9/10 in May to 7.5/10 in June, fueled by increases in demand resulting from the lifting of Covid-related restrictions on business. 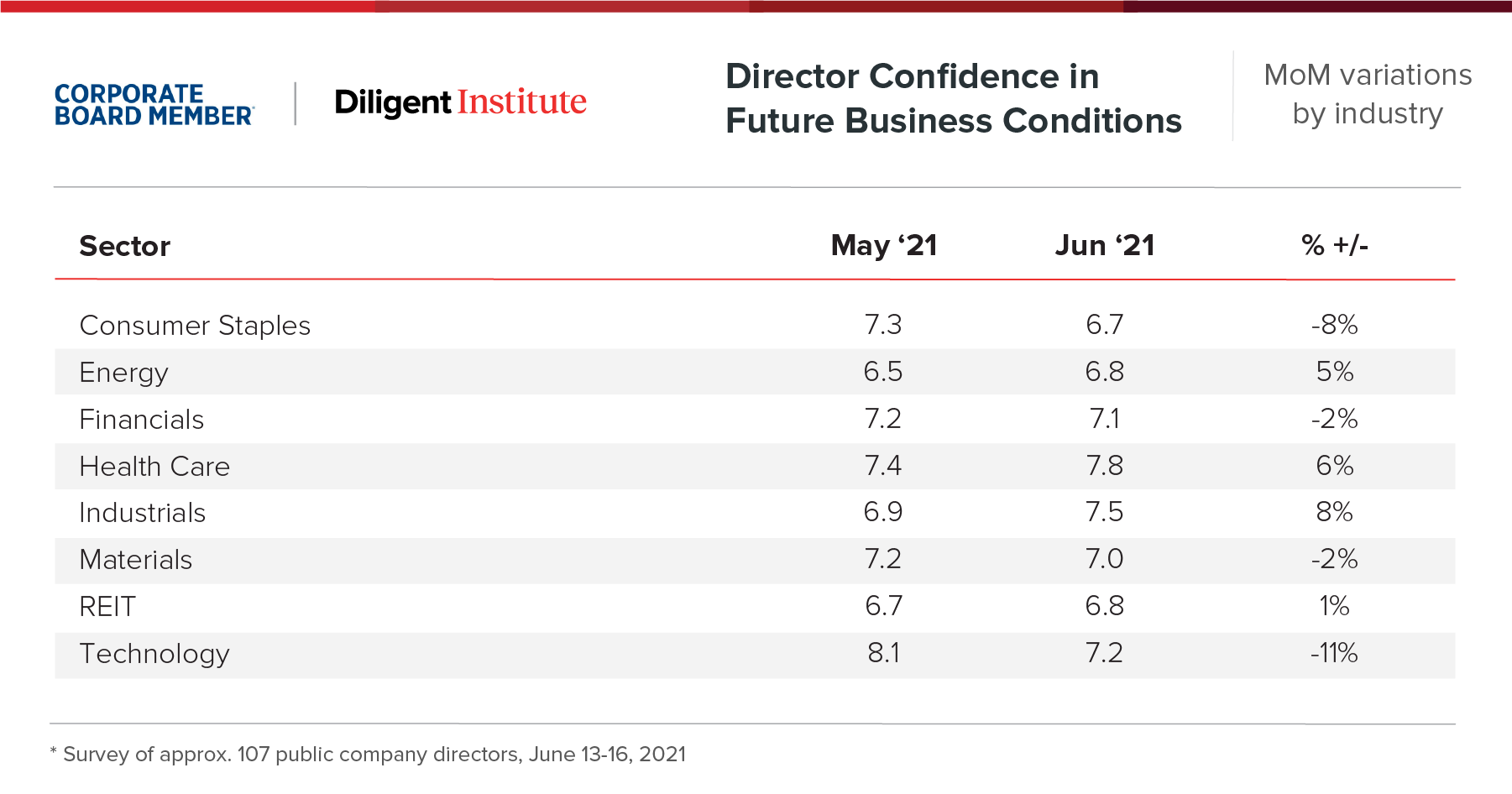 When it comes to the G7’s recent decision to try and implement a global minimum corporate tax, a new poll of U.S. public company directors finds the boardroom community sharply divided on the issue, with a surprising number saying they support the measure—with strong caveats.

In our monthly Director Confidence Index, a poll of U.S. public company board members conducted in partnership between Corporate Board Member and Diligent Institute, 44 percent of polled directors say they support the concept, regardless of the rate, versus 42 percent say they don’t—with another 15 percent saying they’re not sure whether they support it or not. 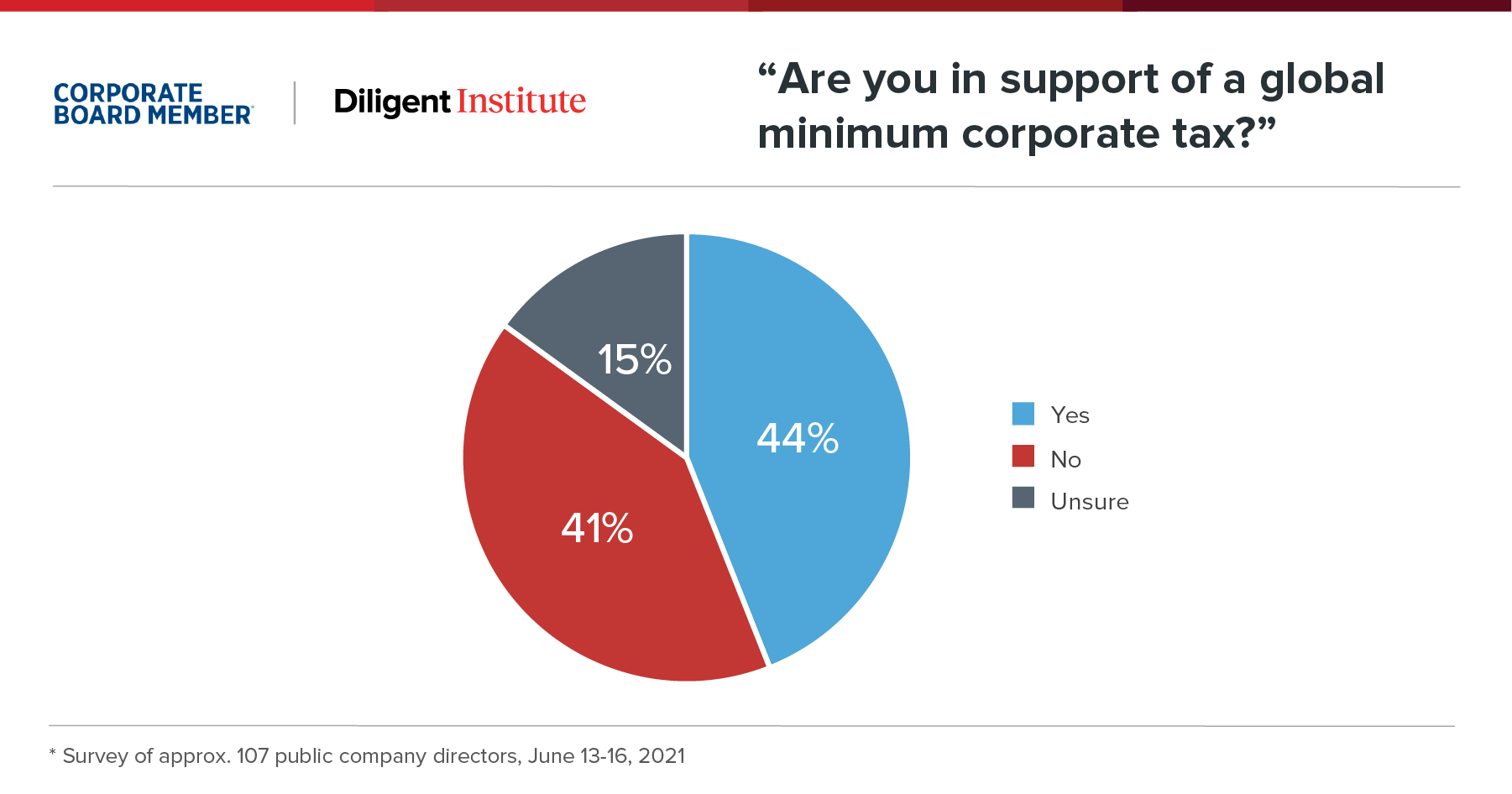 Among those against the corporate minimum tax, the most common reason is a loss of competitiveness for U.S. companies.

“The total corporate tax rate in the U.S. today (including state and local taxes) is competitive with the rest of the world. Any significant increase will make the U.S. uncompetitive again,” explained Clayton Daley, director at Simply Good Foods.

“We need to be careful that tax loopholes and incentives don’t continue to result in no taxes paid by major corporations,” said the director of a healthcare company in support of the tax. “For those companies still in early stage, don’t apply the minimum tax and continue to allow NOLs (net operating losses) and other offsets to encourage innovation and development.” 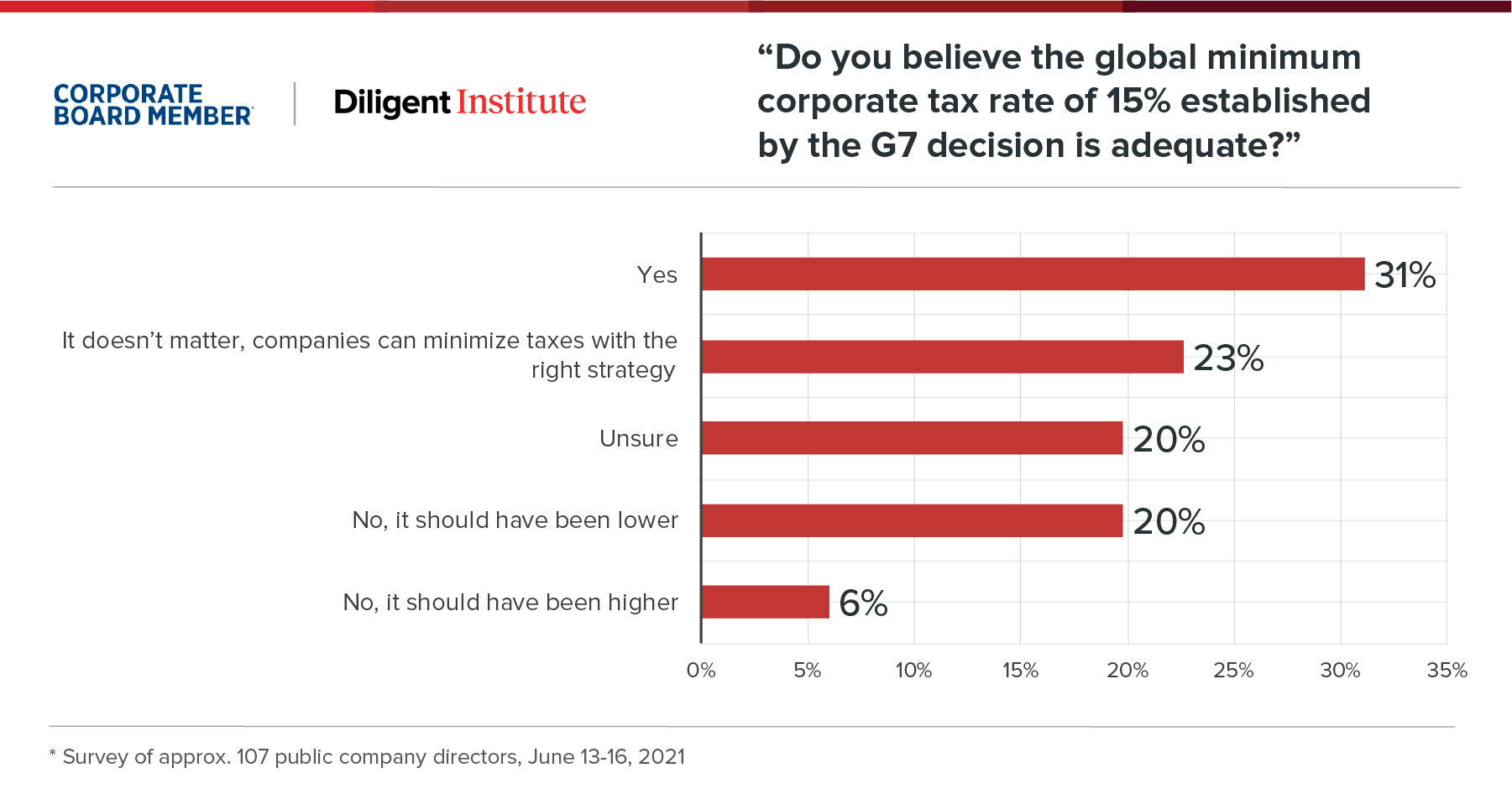 Nevertheless, still a significant proportion, 47 percent, support the idea of raising business taxes, although many of them say there needs to be more specific targets and very detailed infrastructure plans and enhanced government engagement.

The business community has been divided on the issue of raising corporate taxes. On one hand, the Business Roundtable and U.S. Chamber of Commerce have publicly opposed plans to increase corporate taxes in the U.S., while Chamber of Progress, a tech industry group funded by Amazon, Facebook, Google and other tech giants, has voiced its support if it means investing in American infrastructure. Most directors (53 percent) disagree with the idea of raising corporate taxes on the basis of global competitiveness. 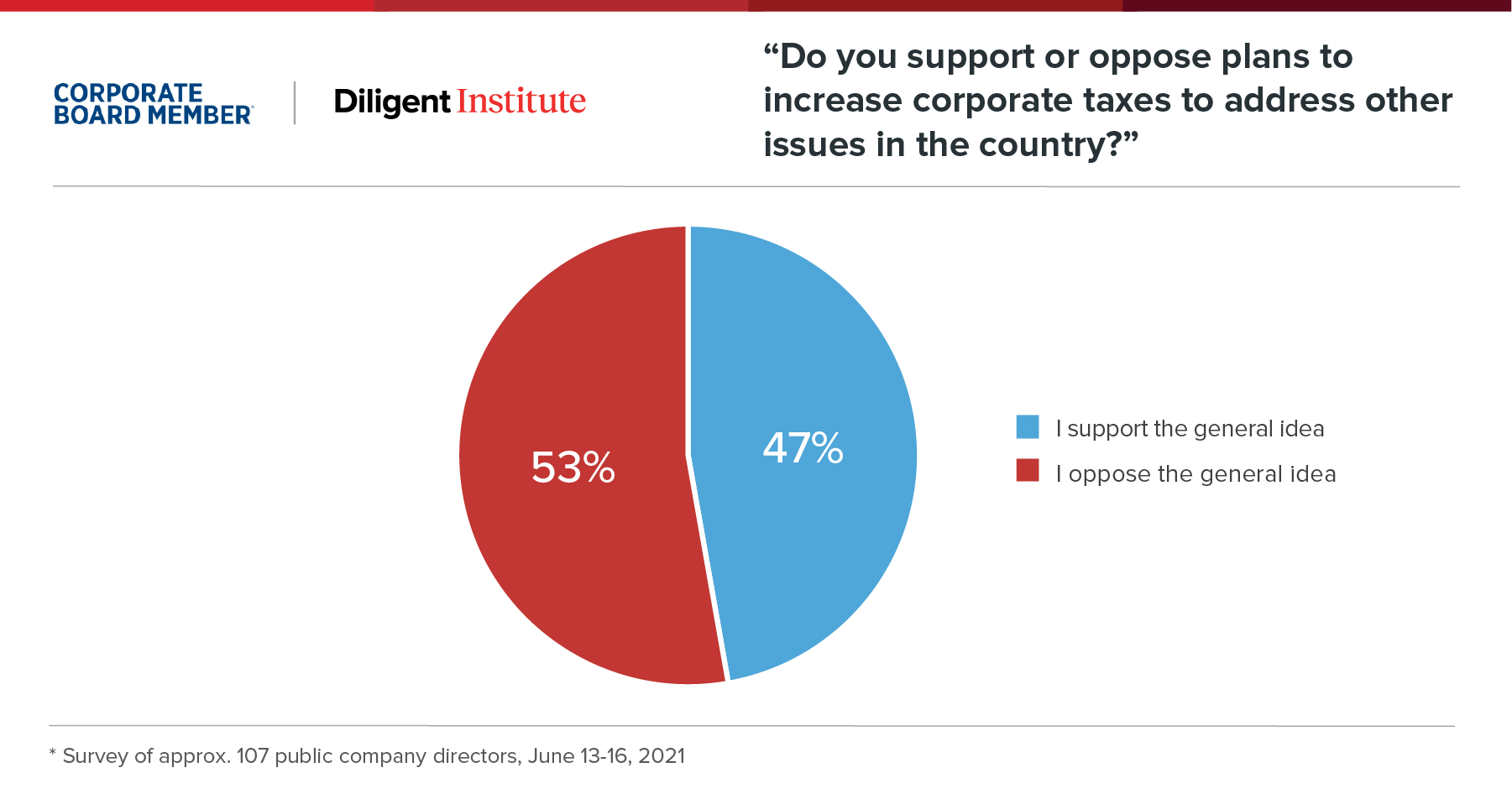 Peter L. Bain, director at asset manager Virtus Investment Partners, says, “We need to be serious about investing in the economy to rebuild infrastructure and recover from the pandemic. This requires government engagement. We must be serious about managing deficits, so revenue must be raised to help mitigate the costs of necessary government spending.”

Right now, however, only 8 percent of directors polled say their company is planning changes to its strategy as a result of potential tax increases. The great majority (88 percent) say they’re either not going to change their strategy or will re-consider doing so when more details emerge.