U.S. public company board members are increasingly confident about the future for business, betting on low interest rates and the unleashing of consumer demand following a successful vaccine rollout.

The future of global business looks increasingly bright thanks to a goldilocks mixture of cheap credit, growing consumer demand and the accelerating rollout of the Covid-19 vaccine—at least among Americans. That appears to be the growing consensus among U.S. corporate directors, who notched their highest rating for the future of the economy in our latest poll.

Our March Director Confidence Index survey, conducted in partnership between Corporate Board Member and Diligent Institute, shows growing optimism for business conditions 12 months from now. Government spending, availability of capital and forecasts of herd immunity by this time next year are a few reasons driving the optimism of the 117 U.S. public company board members polled March 21-24.

According to the data, directors’ confidence is up 3 percent since February, now at 7.4 on our 10-point scale. That is nearly 5 percent higher than CEOs’ steady outlook of 7.1/10, as reported by Chief Executive, earlier this month.

Directors not only indicate optimism in the future but also show increased confidence in current business conditions, rating those a 6.8/10—8.7 percent higher than in February. 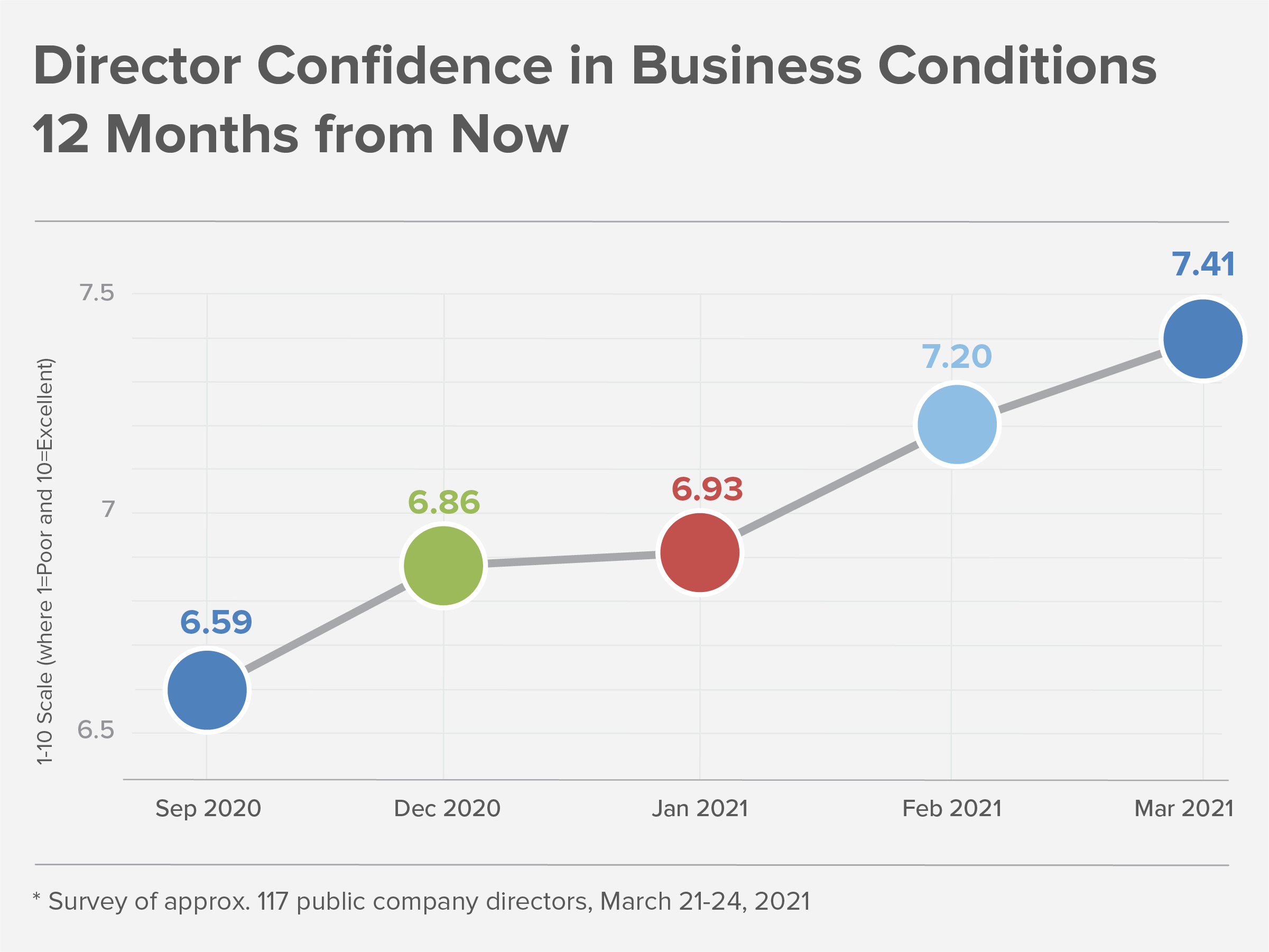 Brad Oates, director at CIT Group, says his optimism that business conditions will improve (from a 5/10 today to a 7/10 by March 2022) is driven by “unprecedented government support, excess savings and pent-up demand,” which he believes will drive economic growth over the coming months.

Many directors participating in the survey shared that sentiment. As the director of a real estate company with a  market capitalization of more than $10 billion explained, “the availability of very inexpensive capital” is the main element driving his forecast of 9/10—a near perfect score.

The optimism is hardly universal, however. Some directors remain cautious in their forecast. One director in the financial sector is hesitant to predict improvement in the economy over the coming months, rating it the same as current conditions, both at a 6/10. “Continuing uncertainty and volatility in the economy as new policies are implemented affect inflation and consumer behavior,” he says. “But there will be gradual recovery in global health as vaccines lead to herd immunity.”

When asked to forecast their board company’s financials for the year ahead, 88 and 81 percent of directors say they expect revenues and profits to be up by this time next year. Those numbers are unchanged since February. 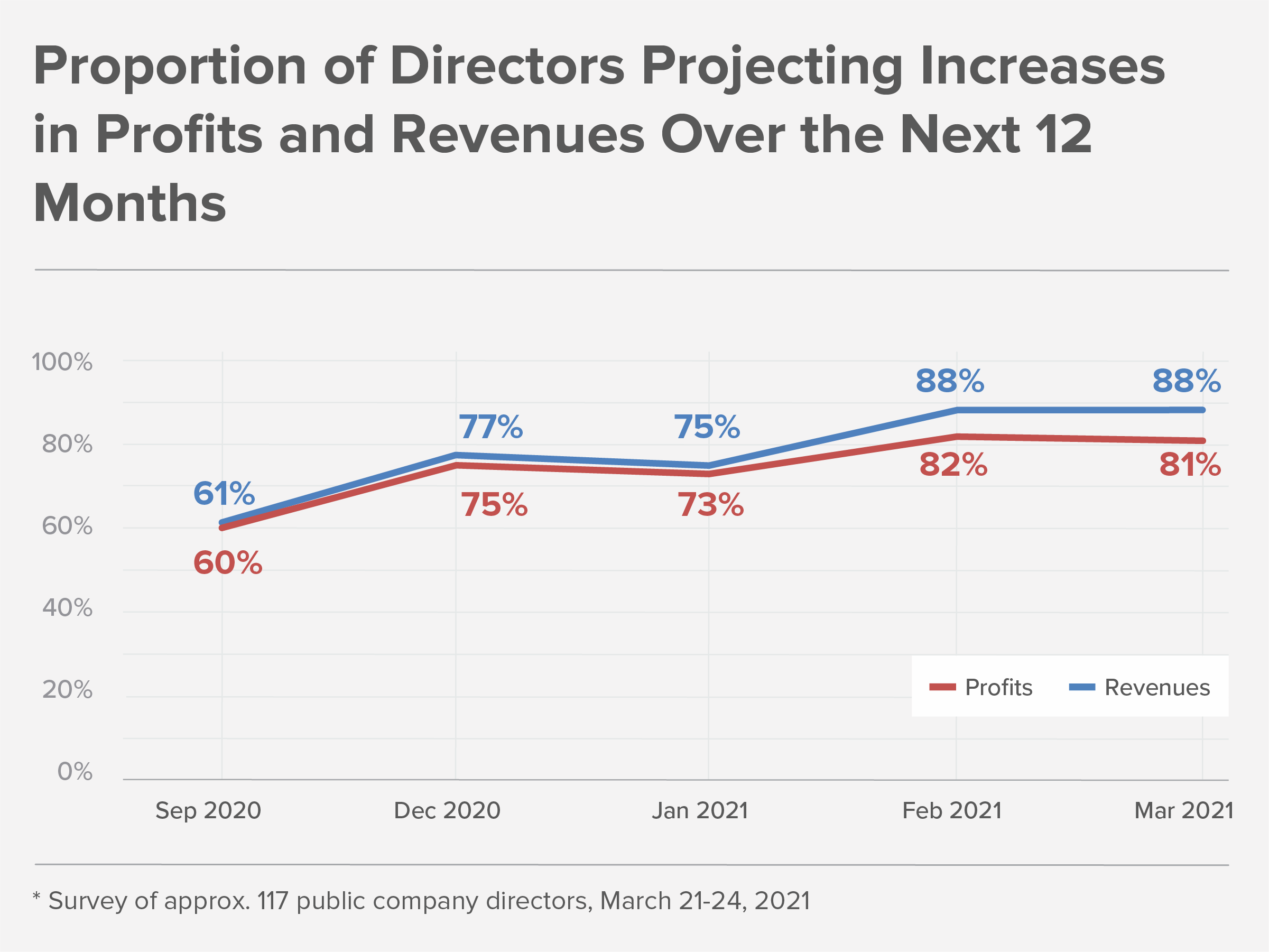 However, the proportion of directors forecasting an increase in capital expenditures in 2021 jumped in March, by 16 percent. Overall, directors’ forecasts across all metrics are much more bullish than that of their CEOs. 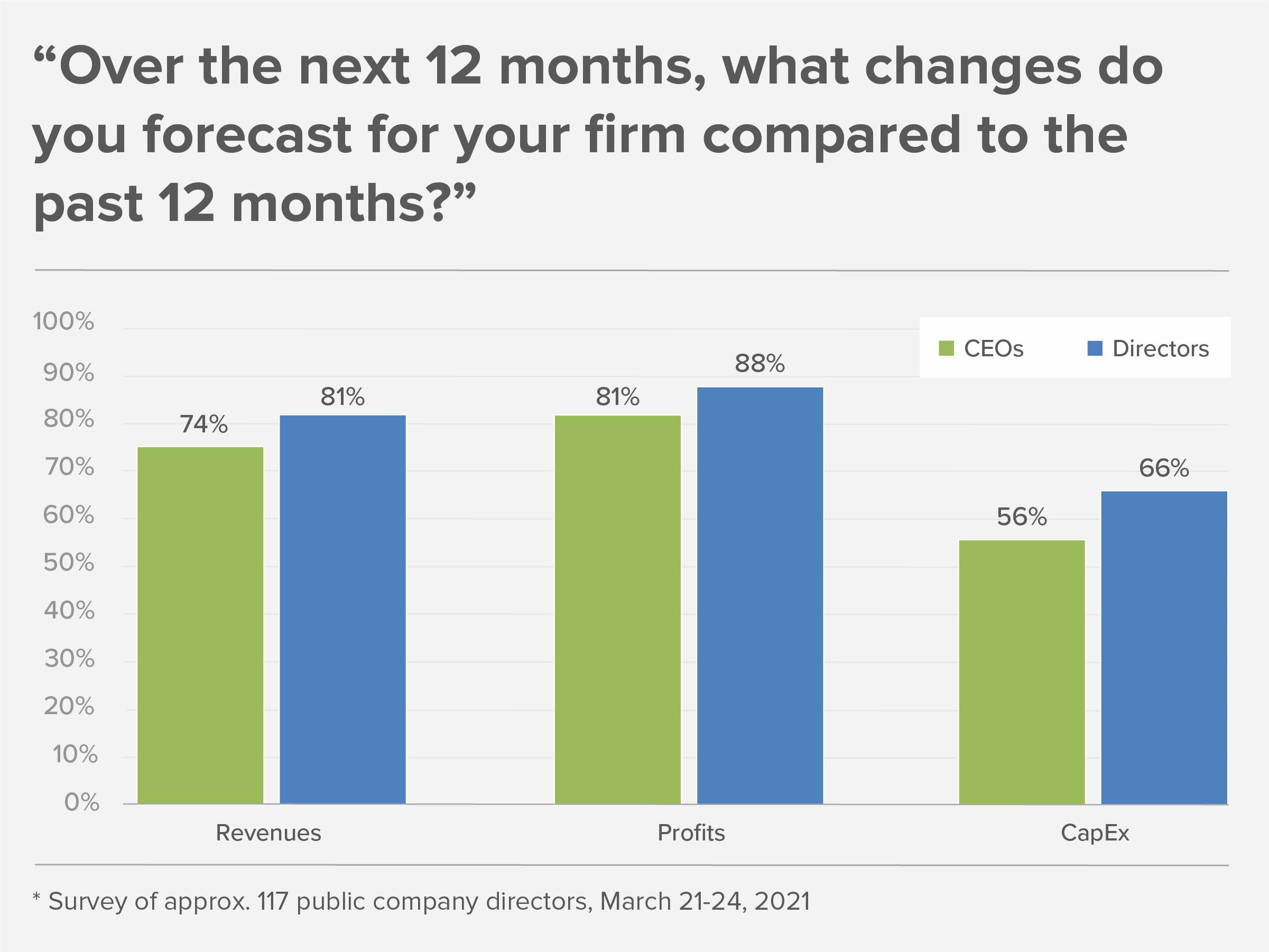 Across sectors, the data shows most directors’ future rating of the economy hovering between 7 and 7.6
out of 10. Directors at organizations in the consumer discretionary sector top the list of most optimistic (8.6/10), while their consumer staples counterparts reported a decline in confidence for the second consecutive month in March—5.6/10, a 15 percent drop vs. February and an indication of how directors in the consumer space expect a vaccinated population will affect spending. 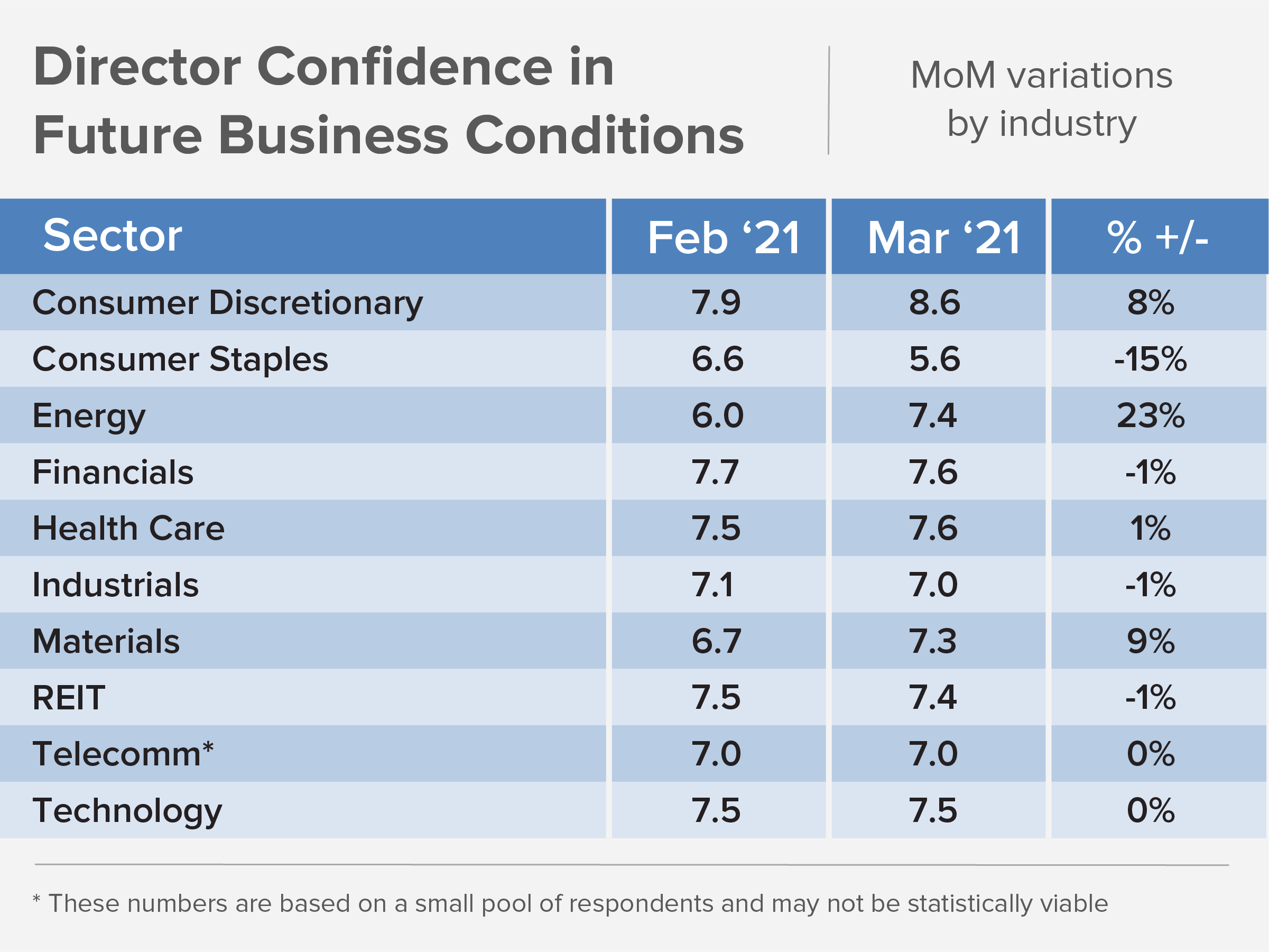 A director in the consumer staples sector says his rating of 2 out of 10 (or “poor” according to our scale) is based on his forecast of tax increases, new regulations, immigration policies and energy prices, which, he says, “will gut consumer and small business confidence and spending.”

Alternatively, a director in the consumer discretionary sector who rates future conditions a 9 out of 10 says “there will be a steady return to stability and predictability in the marketplace due to reducing levels of pandemic concerns.”

The other notable change in our data is the 23 percent increase in confidence in the energy sector, moving from “good” to “very good” territory according to our scale. Directors in that sector say they attribute their growing optimism to a nearing end to the pandemic that will likely lead to an increase in consumer spending and travel, all in a low interest rate environment.

This month, directors were asked to share the most pressing risk issues facing their board in the current environment. Top three on that list: competition/market trends/M&A landscape (25 percent), cybersecurity and data management (24 percent) and digital transformation (12 percent). 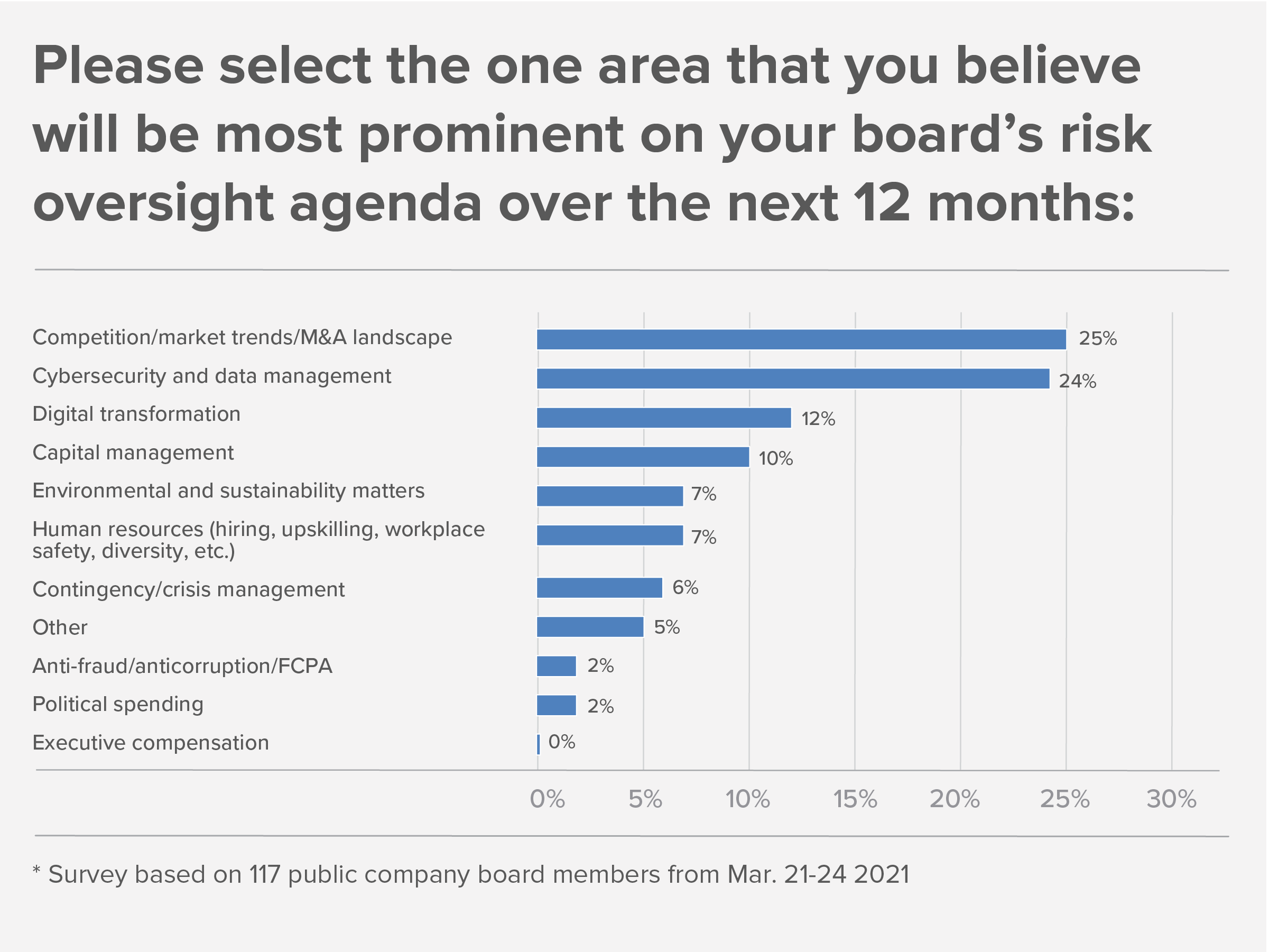 Overall, 2020 was an interesting year for companies, as many legacy organizations learned they needed to pivot—and fast—to make sure they remained relevant to new consumer behavior trends. Some are expecting things to revert back once restrictions are lifted; some are betting on a fully digital era ahead. Keeping a close watch on what develops—with consumers and competitors alike—will be key to staying afloat in the near term.

Similarly, recent events have propelled cybersecurity and data privacy to the forefront of board agendas. Boards will need to continue ensuring their companies are doing everything they can to protect data and access to sensitive assets. Not surprisingly, more than a third (36 percent) of directors surveyed said their board would benefit from having better information, processes or reporting to oversee that risk. 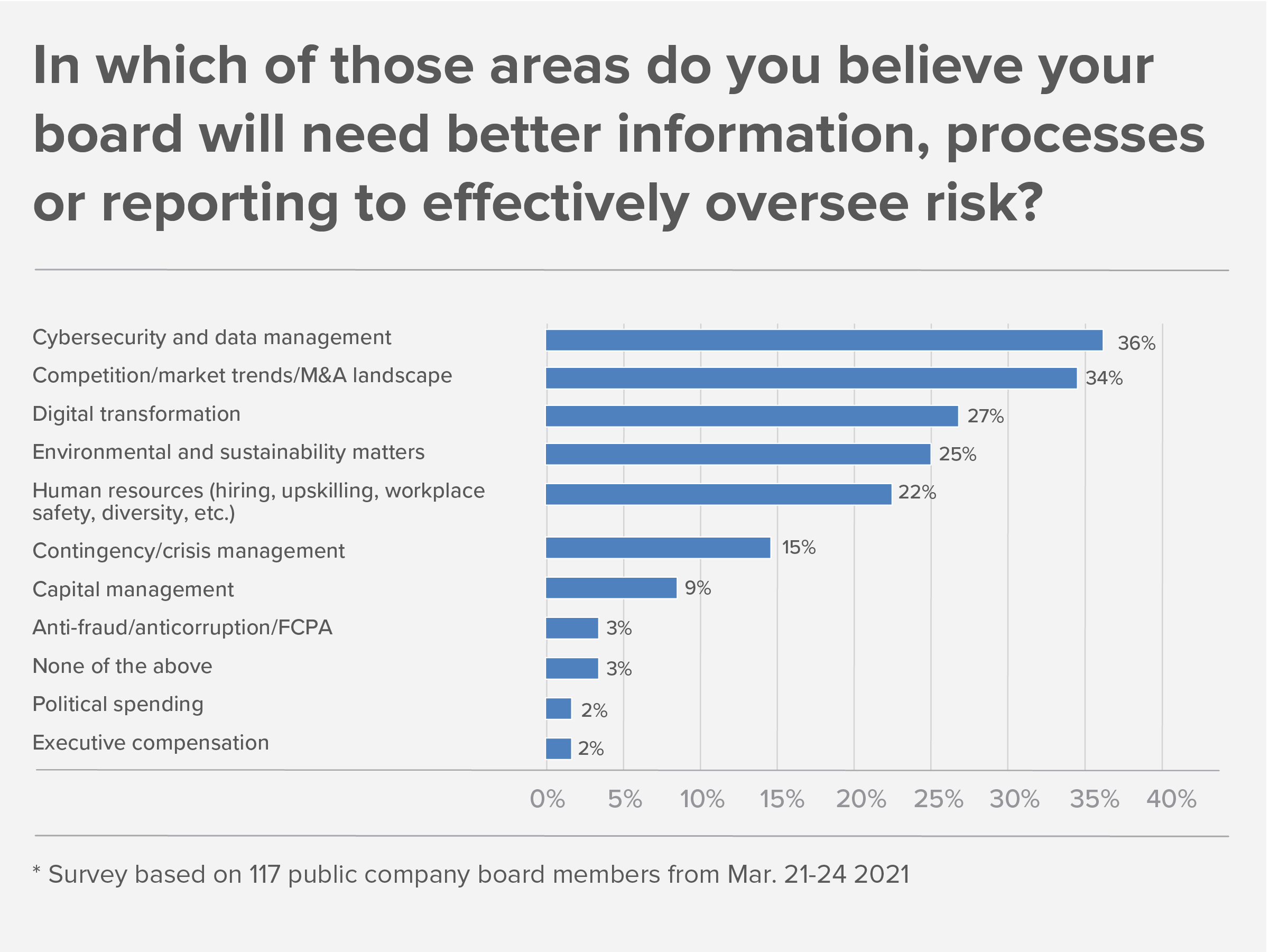