At the end of the first quarter of 2022, public company board members are increasingly concerned about the effects of prolonged inflation and labor shortages. Their assessment of both current and future business conditions dropped significantly in March, mainly due to inflation concerns. Directors say ongoing supply chain disruptions, the war in Ukraine, labor shortages, distrust in the current White House and tension over the upcoming election are also driving their downgrade of business conditions 12 months out.

Those are the key findings of our March Director Confidence Index, conducted March 21-25 in partnership with the Diligent Institute. Our leading indicator is now at 6.3, as measured on a 10-point scale where 10 is Excellent and 1 is Poor. Optimism has been on a near-constant decline since this time last year, down 14 percent, and has ultimately reached its lowest point since we began polling directors in Q3 of 2020. 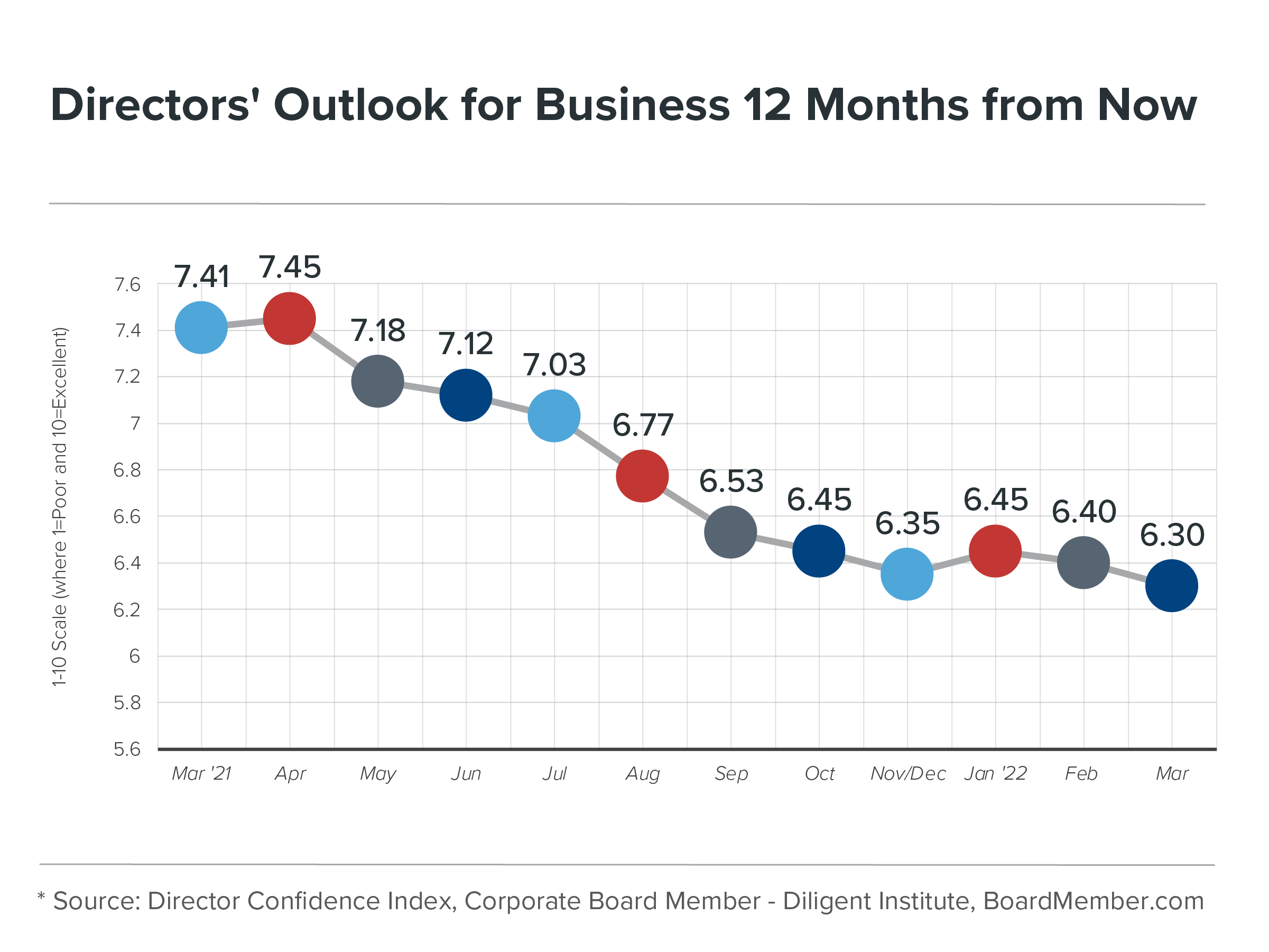 Record-high inflation and worries of stagflation continue to top the list of concerns for polled directors, followed closely by labor shortages. Board members we polled say wage and price pressures brought on by the race for talent and macroeconomic issues are creating a challenging business environment. These issues coupled with geopolitical conflict and the upcoming midterm election hinder directors’ hopes that business and travel will boom over the course of the next year.

These findings align with what we see in the Corporate Sentiment Tracker, Diligent Institute’s AI-powered tool which tracks which issues corporate leaders are speaking about most frequently in the news and whether they’re speaking about those issues in a positive or a negative way. At the time this report is being written, overall corporate leader sentiment is at 60% positive, and the most frequent topics being discussed in the last 14 days are “inflation,” “growth,” and “Ukraine,” in that order.

A director on the board of a large hospitality company believes business conditions will deteriorate slightly over the coming months due to “the inability to attract a sufficient workforce for skilled and unskilled positions. The employment picture is much less positive than the Fed and elected officials indicate,” he said.

“My forecast is driven mostly by wage pressures, related to inflation and a tight labor market,” said a director on the board of a large bank holding company who also expects conditions to deteriorate by this time next year.

Bob Murley, chair of medical waste disposal company Stericycle, says inflation, the war in Ukraine, supply chain issues and the Feb rate hike all weigh significantly on his forecast that business conditions will decline this year. “The other elements driving my forecast are the level of U.S. deficit, decreasing consumer confidence, the major risk of recession in Europe and lastly, the potential for stagflation in the U.S.,” he said.

Overall, directors say inflation is the one element having the most significant impact on their forecast for business, rating it a 4 out of 5, on a 5-point scale, where 1 is No impact and 5 is Significant impact. This is at least 10 percent higher than the impact of other elements, such as supply chain disruptions (3.6/5), the invasion of Ukraine (3.2/5) and the recent Fed interest rate hike (3.2/5). 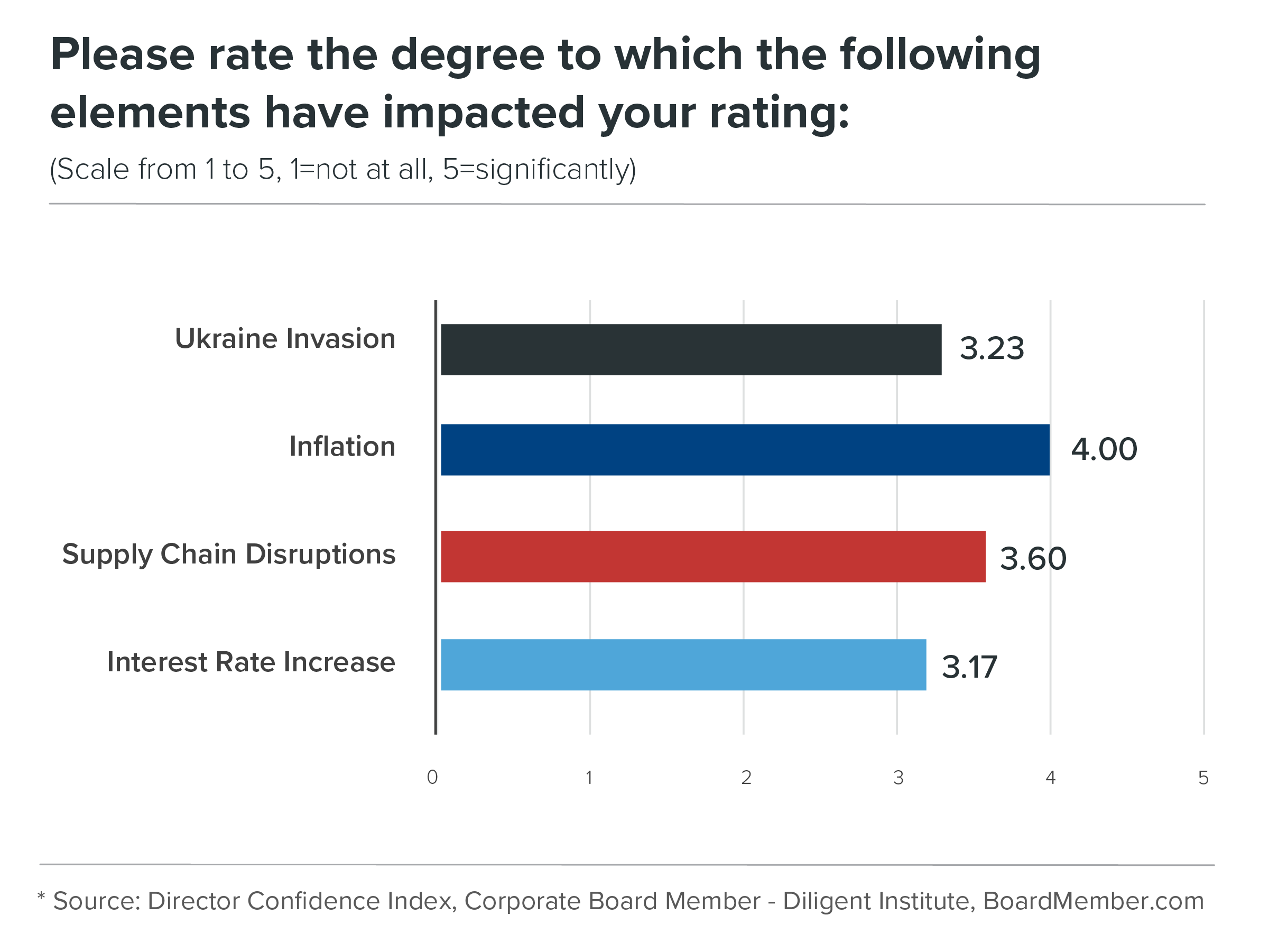 Directors’ sentiment surrounding the current business environment also dipped this month, to 6.6 from 6.9. That is a decline of 4 percent month-over-month and 2 percent below their rating in March 2021 (well before any Covid-related mandates were removed). Nevertheless, their assessment of the current environment is still higher than their forecast for the future, which they attribute to fears that inflation, federal government policies and perhaps even another wave of Covid-19 will slow economic growth and stifle business activity.

“The likelihood of major cybersecurity attacks and resultant issues drives down my rating,” said the audit committee chair of an automotive retailer who expects conditions to decline from an 8/10 to a 7/10 one year from now. “I am also concerned about another Covid-19 wave after watching Europe and Hong Kong struggle.” Her concerns echo the results from our annual What Directors Think Survey, where directors rank cybersecurity first on the list of difficult issues to oversee, and three-quarters of directors now say they’re more concerned about their company confronting a cybersecurity/data breach over any other crisis.

The director of a materials-making company says his forecast is dampened by “increased regulation from the Biden administration, especially regarding energy policy or lack thereof.” He believes conditions will drop from an 8 out of 10 to a 6 by March 2023 as a result.

Interestingly, CEOs’ ratings for both current and future conditions—collected as part of sister publication Chief Executive’s CEO Confidence Index—increased in March, post Ukraine invasion—albeit by a modest 1 percent. They rated their forecast for business 12 months from now a 6.7/10, 7 percent higher than directors’ rating. The main reasons given were the unified condemnation of Russia’s aggressions from the West and the courage of U.S. businesses to suspend operations in the country.

The belief that recovery from Covid-19 will boost the business environment also seemed encouraging to CEOs. In fact, their worries over inflation and the supply chain were tempered by hope that by this time next year, the pandemic, inflation and supply woes will be largely controlled, all while consumers continue to spend. 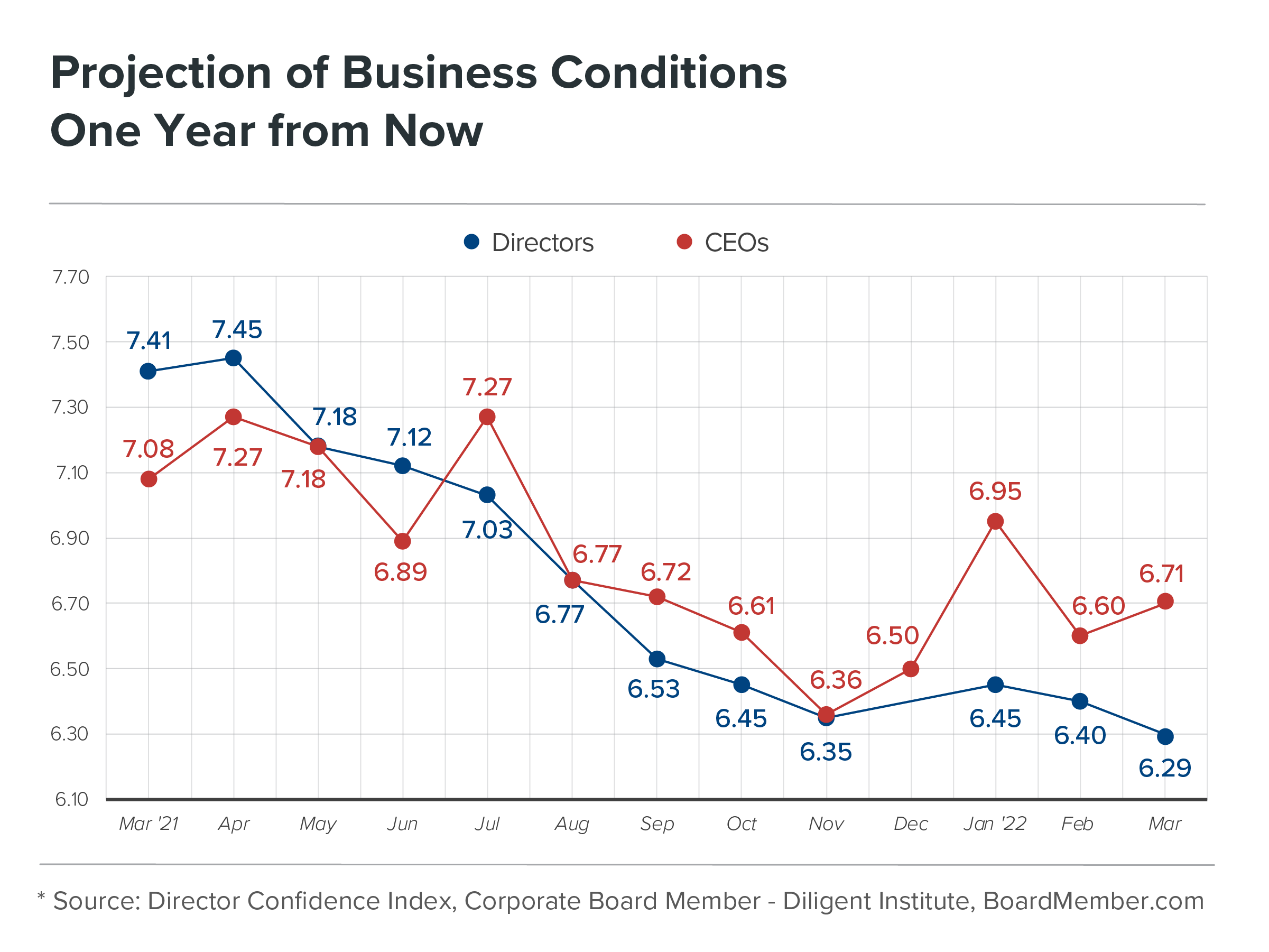 The optimism is not as widely spread among the governance community: 44 percent of directors surveyed say they expect business conditions to deteriorate over the next 12 months, compared to 38 percent of CEOs who expect the same.

Twenty-eight percent of directors say they believe conditions will improve, encouraged by more industries opening up and shifts away from the Covid-19 ways of doing business.

“Covid-19 decline/reopening pushes more consumer spending into categories like travel and entertainment and away from e-commerce,” said the director of a media company who expects business conditions to increase from 6 out of 10 to 7 out of 10.

The remaining 28 percent say they expect conditions to remain the same. Their reasons are similar to those who forecast deteriorating conditions and include supply and labor shortages and overall instability in the world.

“There are multiple basic disruptions occurring at the same time,” said the board chair of a bank. “This creates a lot of uncertainty, which negatively affects how people and businesses behave. Combining that with a very reactive, somewhat unpredictable administration results in an unsustainable situation. I believe this ultimately creates a risk of a declining overall business environment.” 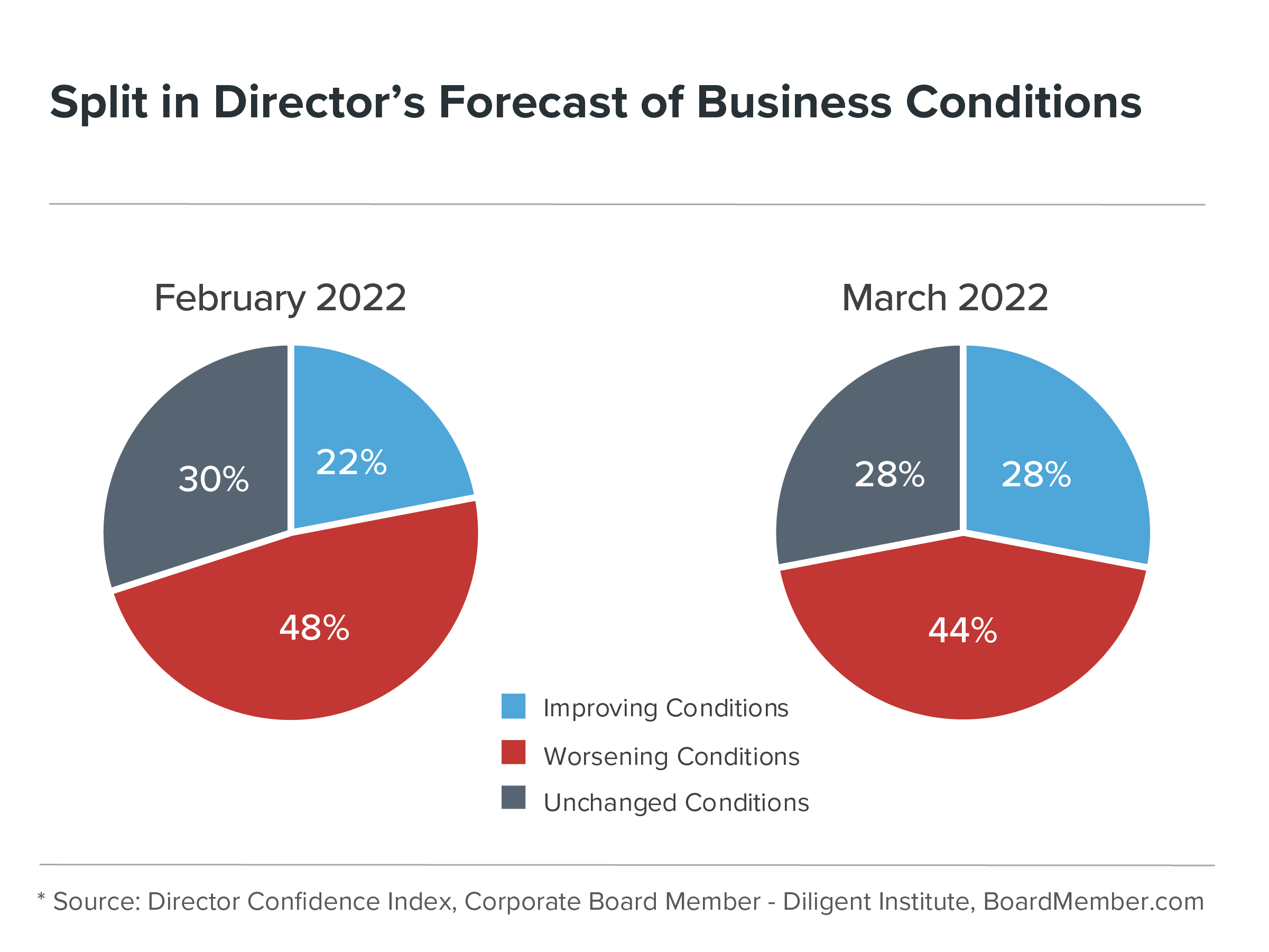 In an inflation setting, it’s no surprise that fewer directors now plan to increase capital expenditures in the year ahead. That proportion dropped 6 percent, to 53 percent. 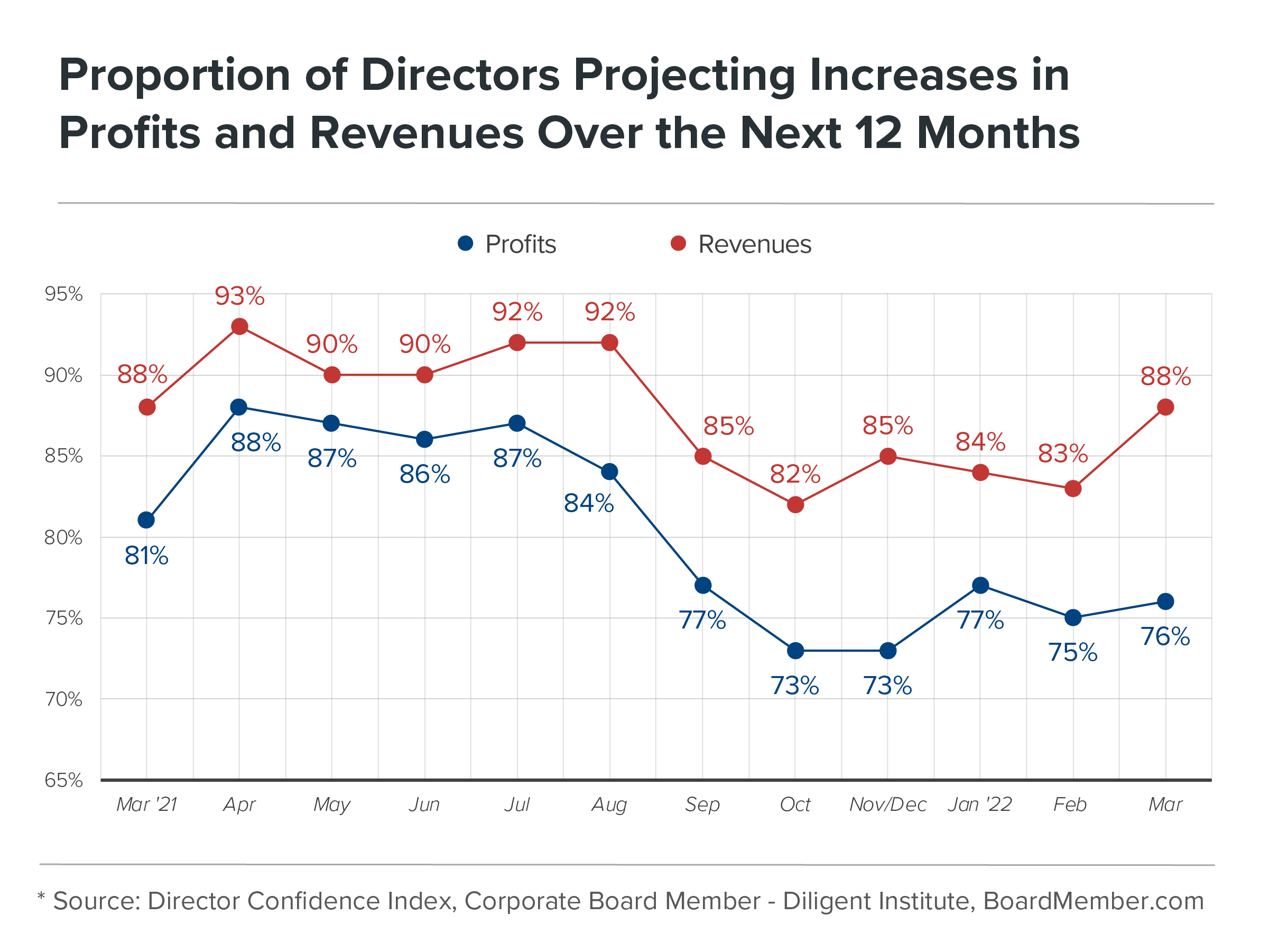 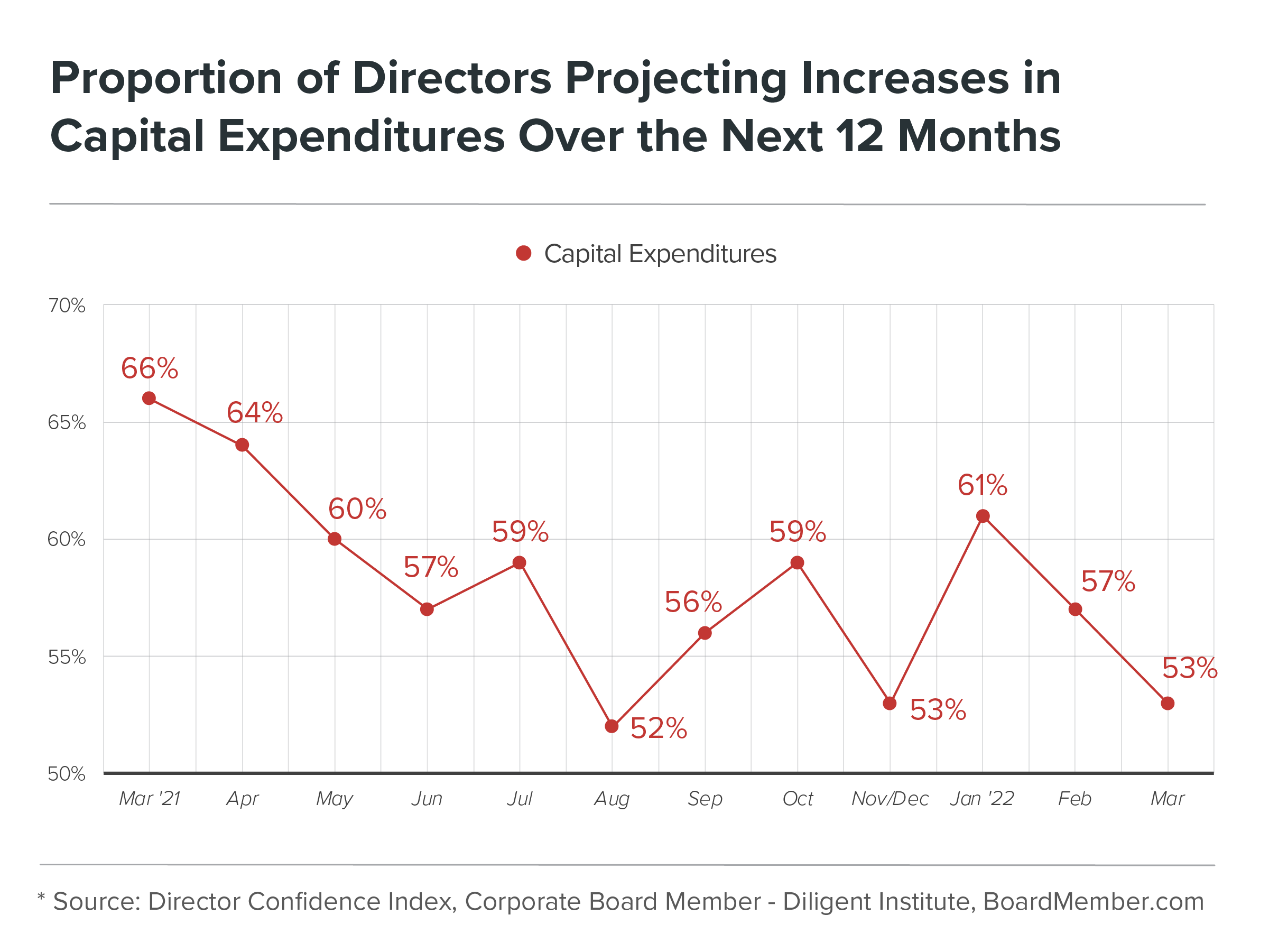 More directors say the war in Ukraine has affected their companies’ cybersecurity than anything else and three quarters of directors see it as a prolonged challenge, “with no end in sight.”

Over a month after the invasion of Ukraine, directors are growing increasingly concerned about the long-term effects of a war in Europe. Inflation, cybersecurity and supply chains were already issues before the war, but now, directors are concerned about how bad it may get—and for how long—before it gets better. More than 70 percent say they see “no end in sight” to the current talent and cybersecurity issues.

In a poll of 143 public company board members, surveyed March 21-25 as part of our Director Confidence Index, 56 percent said Russia’s invasion of Ukraine has heightened cybersecurity concerns—and 39 percent also expect significant consequences on their supply chains.

These challenges are reflected in the Director Confidence Index, where directors are asked to rate their outlook on the business environment 12 months out and their confidence in the current conditions. Directors’ rating fell to an all-time low this month. 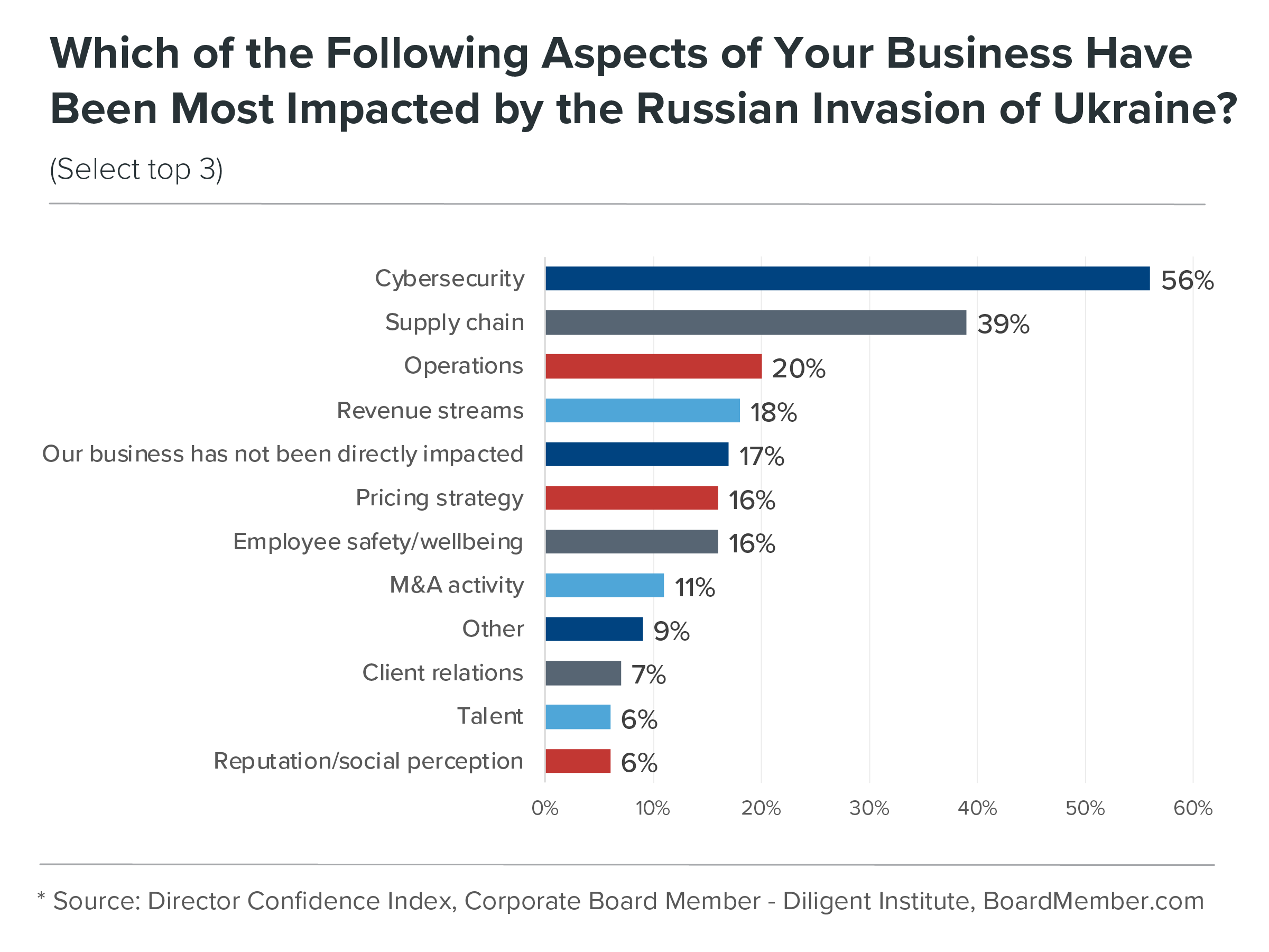 The war has especially affected supply chains in sectors like materials and consumer staples, where 100 percent of directors report an impact. 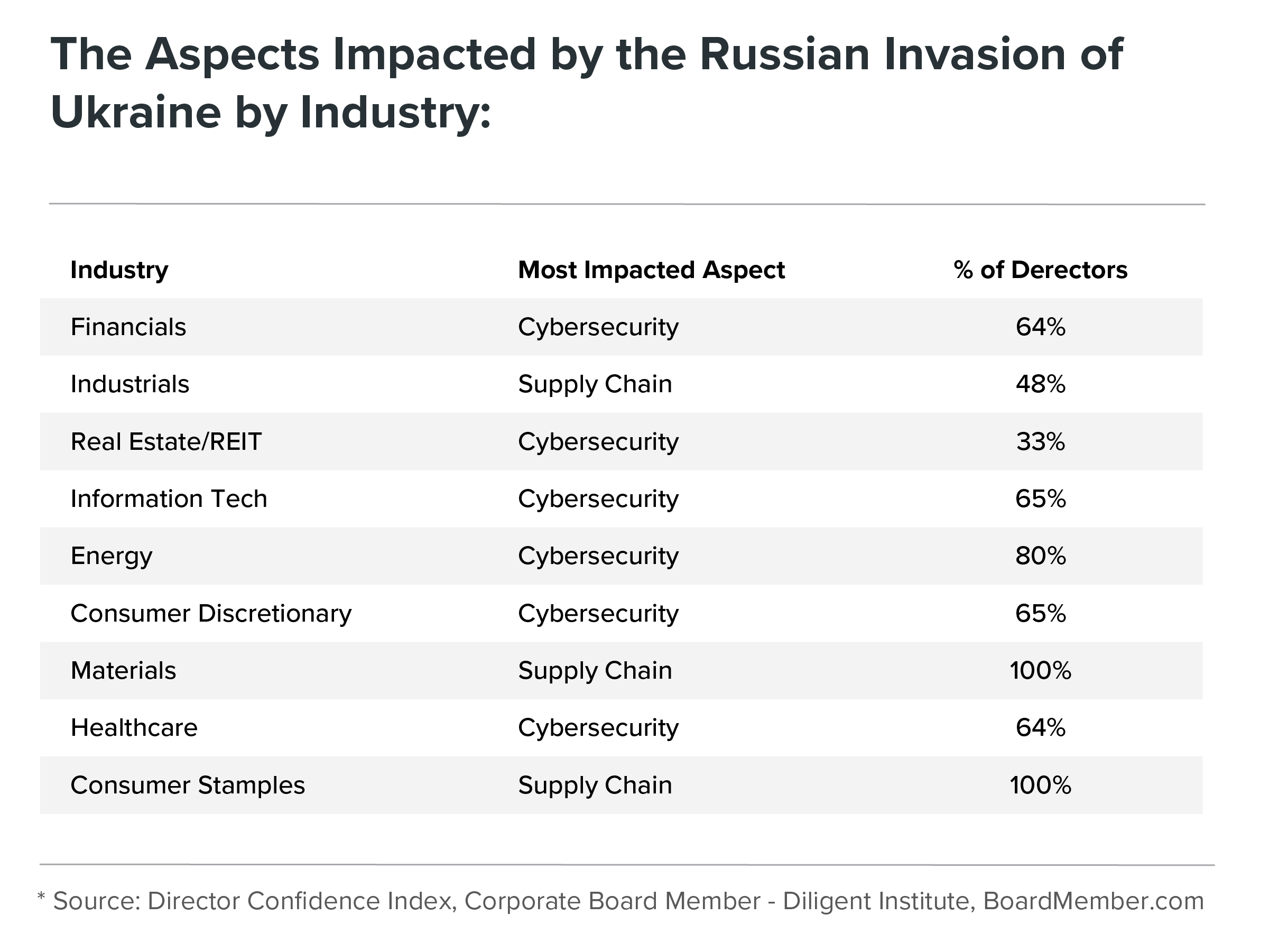 Not only has the war intensified existing challenges, but directors also anticipate many of those issues are here to stay. Fully three-quarters of directors whose cybersecurity concerns have increased since the invasion of Ukraine say they see “no end in sight” to the issue, compared to only 12 percent who expect it to be resolved within 1-2 years. No directors forecast cybersecurity risks to diminish in the near term (<6 months).

Seventy-one percent also expect talent shortages to remain a problem for the foreseeable future, and 50 percent anticipate supply chain disruptions to continue for another year or two.

The board chair of a large entertainment and hospitality company said, “We face significant challenges. This is cyclical, and we will prevail, but it will take smart, dedicated public policy, along with continuing private investments and smart management by enterprise, supported by dedicated, courageous board oversight at all levels of public, private and operating not-for-profit companies.” 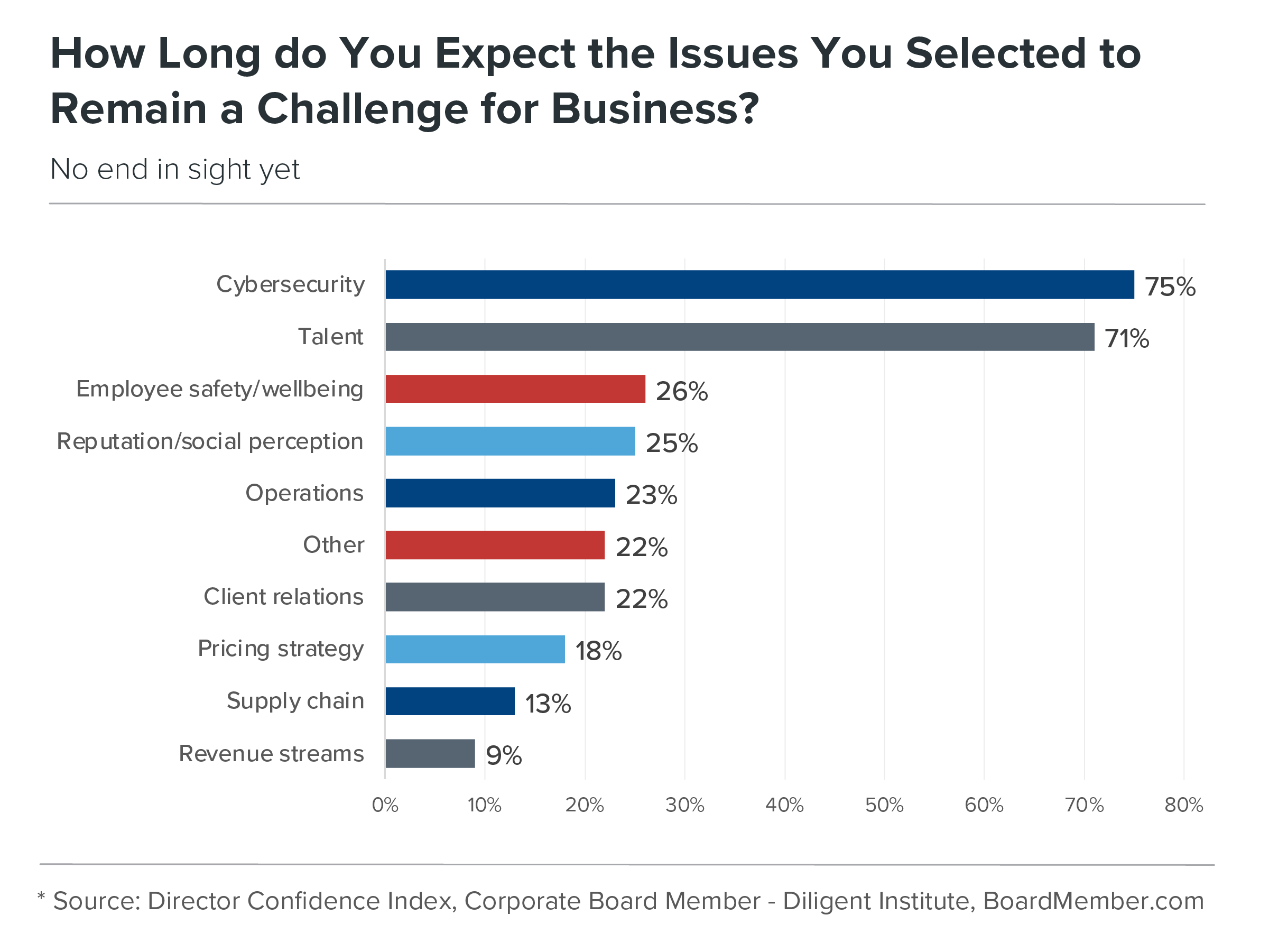 “Whatever companies chose to do in this situation will be a precedent for China’s invasion of Taiwan. Will these same companies and industries speak out against China and remove their operations, distribution, etc. in China? Let’s not kid ourselves, China is more totalitarian than Russia,” said the board chair of an international law firm. 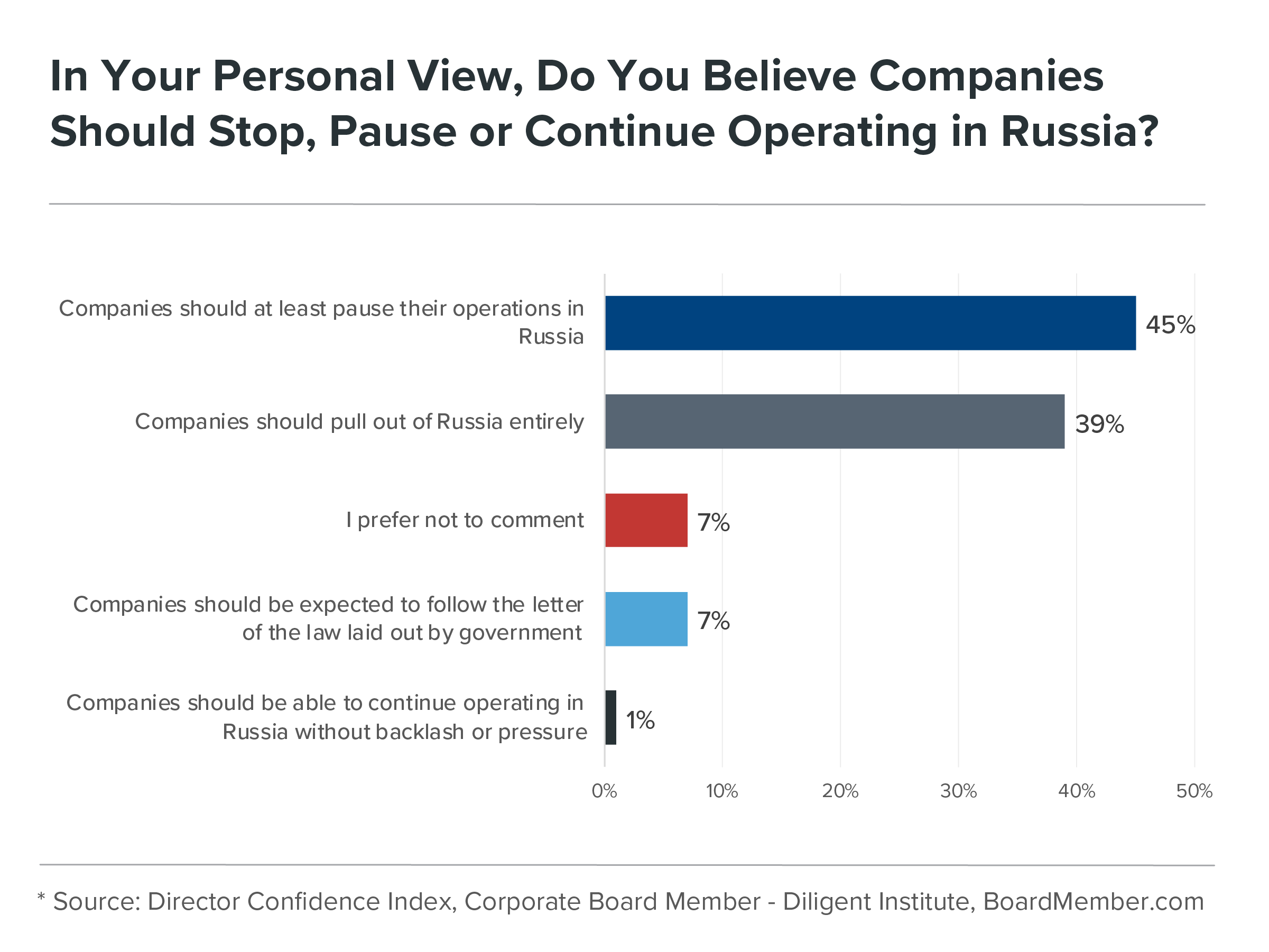 Of course, the decision is often industry specific. Directors in sectors like healthcare and pharma say they can’t pull out for humanitarian reasons. 14 percent of them say companies should follow the letter of the law, compared to only 7 percent overall.

The Fed’s quarter-point interest rate hike didn’t disappoint many directors. In fact, the vast majority, 63 percent, say they fully support the decision—and 28 percent argue the rate should have been greater.

Only 9 percent say the move came a tad too early, such as the director of an investment firm, who says, “Raising interest rates is inflationary and therefore counterintuitive. If you want to control inflation, reduce advantages of new capital investment. Investment tax debit as opposed to investment tax credit. Focus on inflation causing activity. Don’t destroy the entire economy by raising it for everyone, as this is in and of itself Inflationary.” 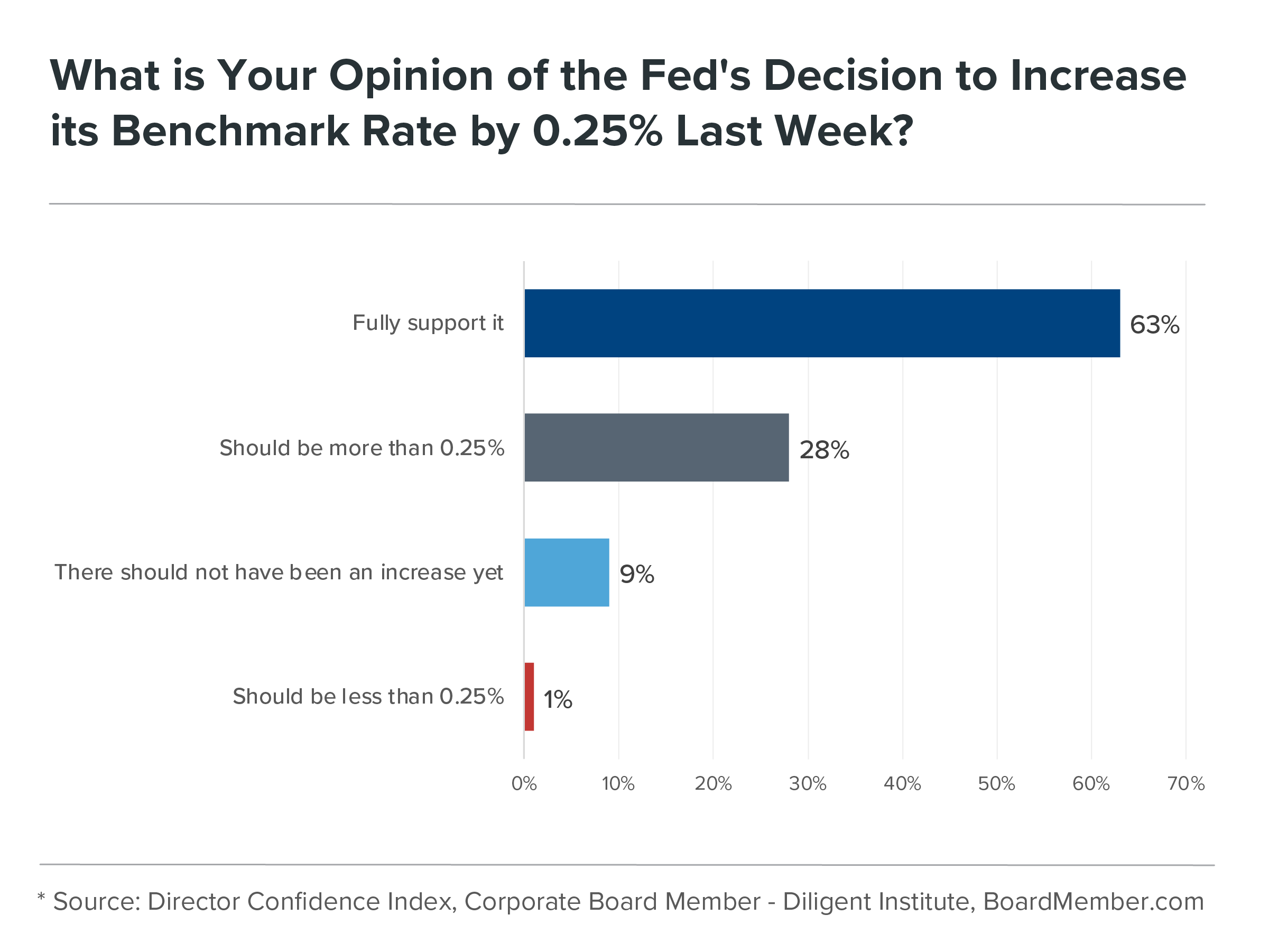