After months of growing optimism, directors pulled back their forecasts in May on concerns that rising inflation and interest rates will slow economic recovery over the coming year. Raw material shortages and potential corporate tax increases are also driving confidence down, despite the reopening of business across the country and a boom in consumer spending.

Those are the key findings from our May Director Confidence Index, a poll of public company board members conducted in partnership between Corporate Board Member and Diligent Institute. Our forward-looking indicator slipped in May, to 7.2 out of 10 on our 10-point scale, down almost 4 percent since April. This comes at a time when CEOs’ outlook for the next 12 months also slipped, as reported by Chief Executive earlier this month.

The Index remains in “very good” territory according to our scale, driven by vaccinations, consumer demand, recovery in hard-hit industries and consistently improving technology, but continued raw material shortages, Washington tax talks and inflationary risks are weighing down optimism for the near future, many of the 135 directors polled May 16-20 report.

Director sentiment on current business conditions remains unchanged from the month prior, at 7/10—much like their CEO peers, who also rated current conditions a 7/10. However, a growing number of both directors and CEOs are forecasting worsening conditions in 2022 when compared to April—an indicator that conditions may not be improving as quickly as anticipated. 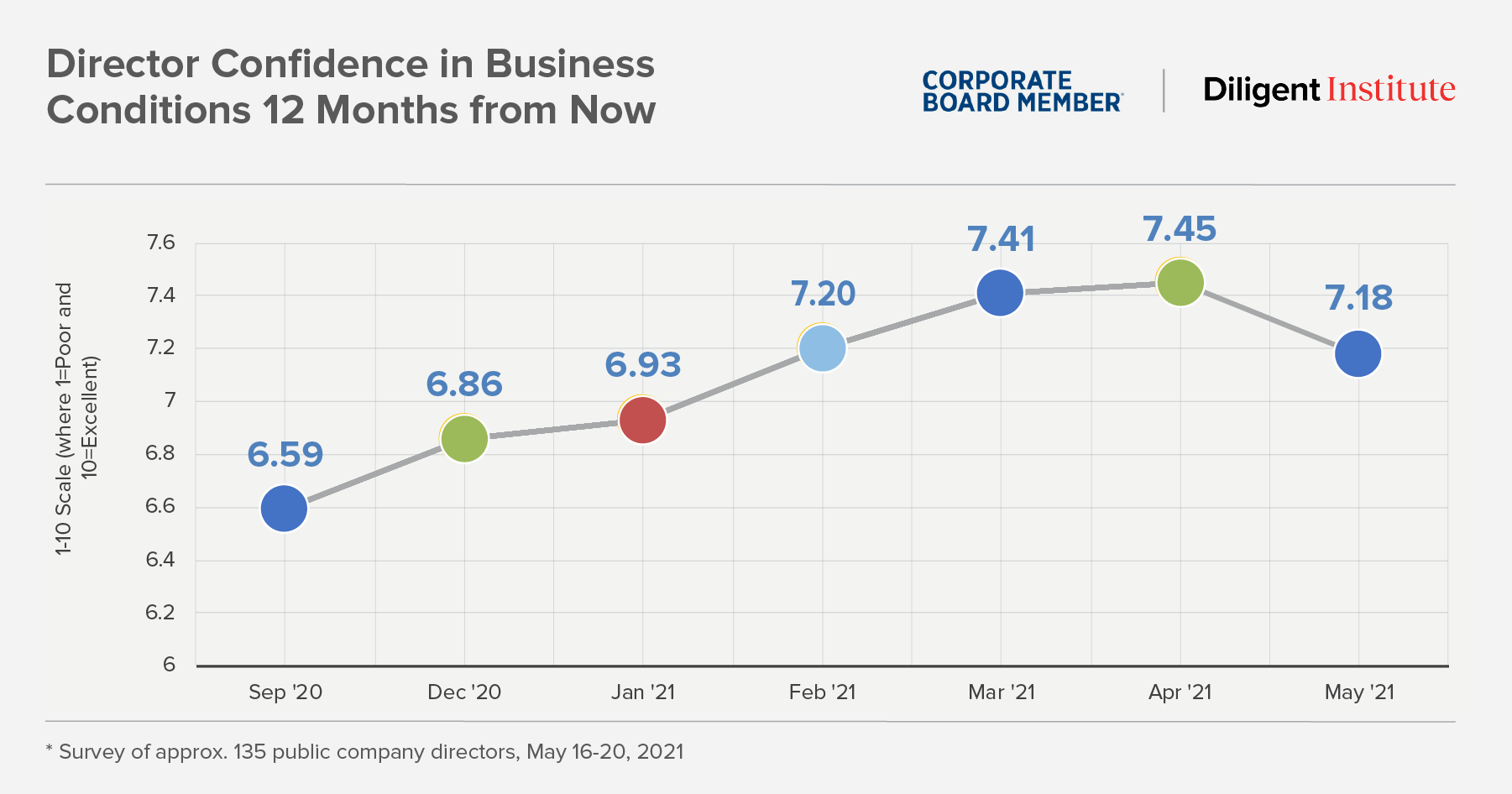 In a reversal from the prior month, when a majority of directors forecasted improving business conditions by this time next year, only 47 percent of directors shared the same view in May—and a growing number of directors are forecasting worsening conditions by May 2022, 29 percent this month vs. 23 percent in April.

David Hardie, director at oil and gas exploration company Hallador Energy Company, views current conditions as weak”, rating them a mere 4/10, and business conditions a year from now even worse, at 3/10. He says inflation is at the core of his forecast, “and I fear that trying to control it could be very difficult,” he says. 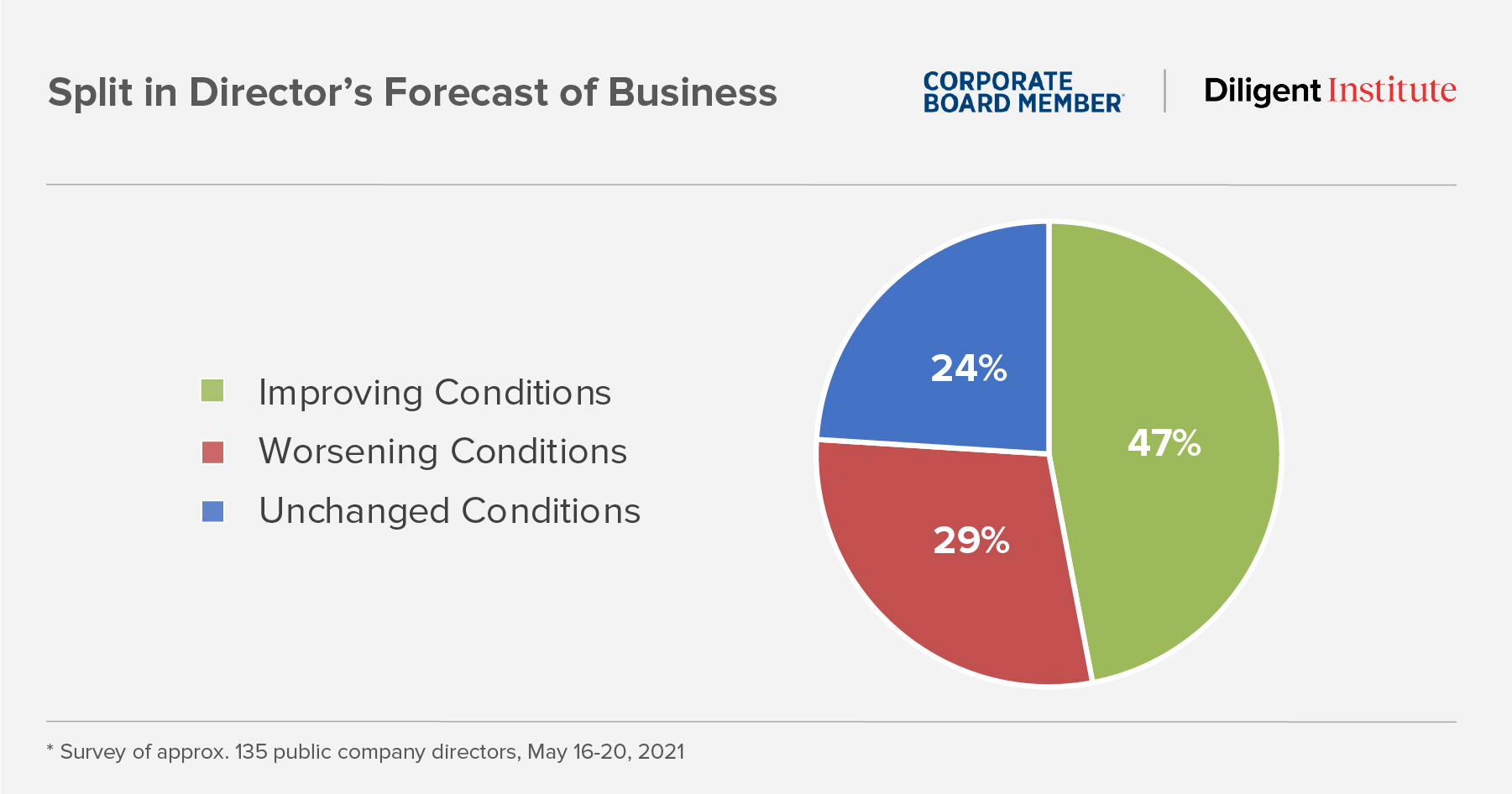 In a similar vein, Ari Papoulias, a director at manufacturer United Guardian, says “strong demand and [a] growth outlook of 6-8%, that will be somewhat limited by inflationary pressures,” are behind his rating of 7/10 for future business conditions, down from his 8/10 rating of current conditions. Even directors who expect conditions to improve have inflation on their radar; it was the most cited driver of outlook in this May polling.

David Crean, director at Histogen, a clinical-stage therapeutics company, says he expects the business landscape to be a 9 out of 10 by this time next year, but he fears inflation and corporate tax policies will remain a concern. “Demand is strong; consumer confidence; M&A
activity; dry powder on balance sheets looking to be deployed. On my radar are inflationary concerns and tax increases,” he says. 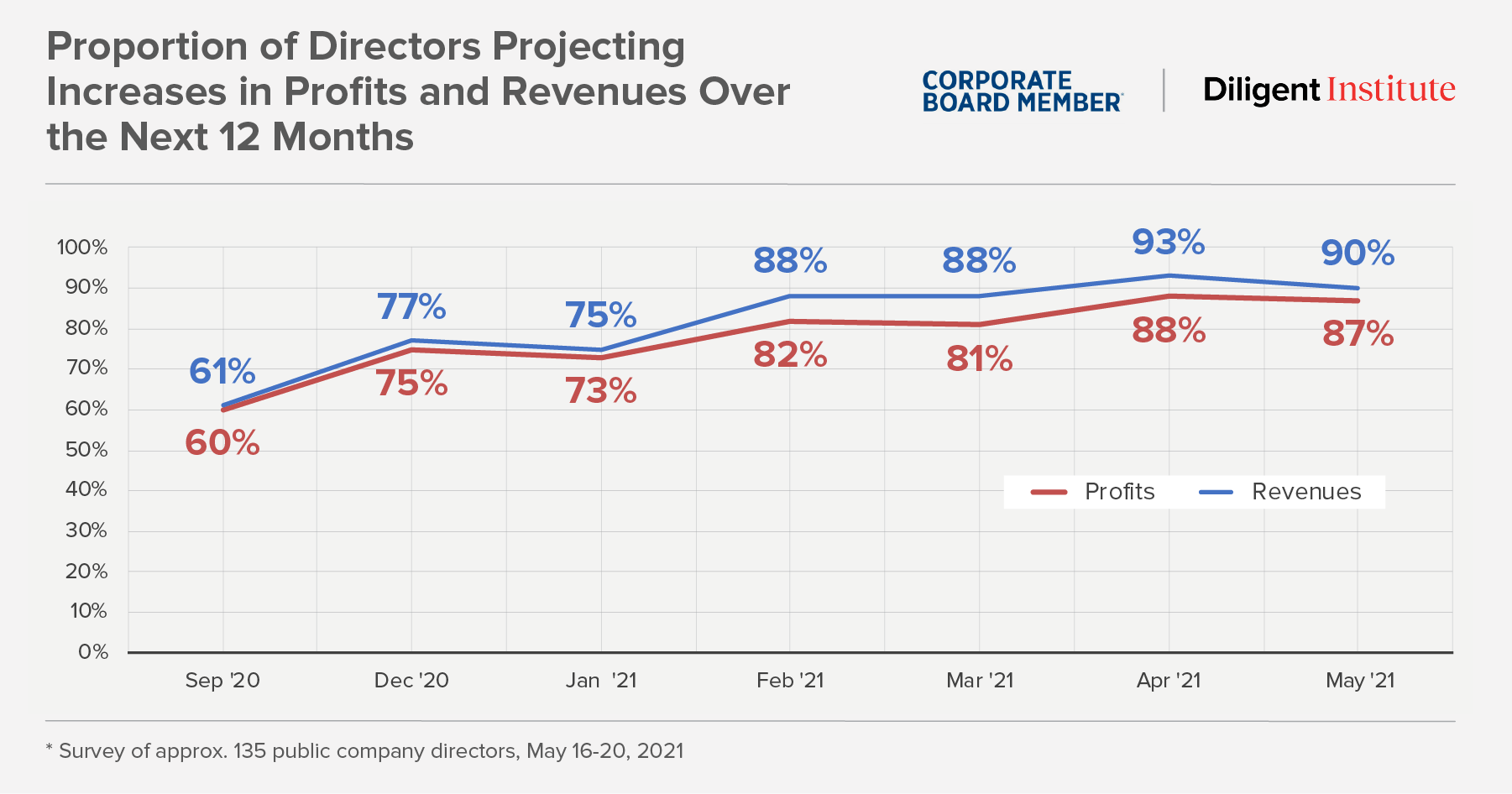 By contrast, 80 and 88 percent of CEOs polled in May forecasted increases in both revenue and profits, respectively. In fact, the proportion of those predicting increases in revenues leaped 6 percent this month from 83 percent in April.

The proportion of directors forecasting increases in capital expenditures also dropped this month, down to 60 percent from 64 percent the month prior—in line with CEOs’ forecasts. 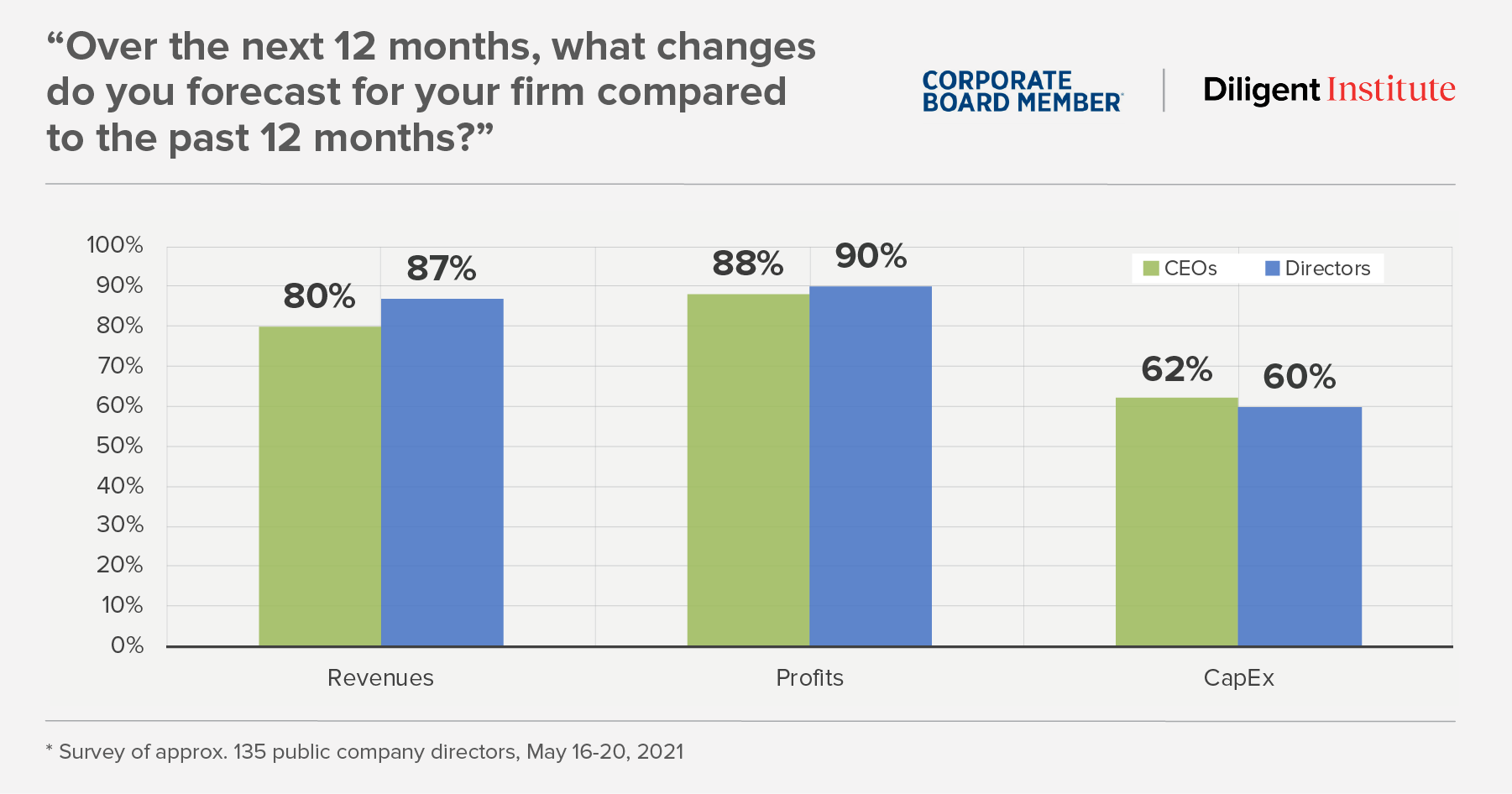 Across sectors, director confidence varied widely. When looking at projections for business 12 months from now, the data shows the largest drop in confidence among directors in the energy sector. Their outlook dropped 16 percent, from 7.8/10 in April to 6.5/10 in May. A director in the sector says her rating of 3/10—down from 6/10 for current conditions— stems from various policies in Washington. She lists national security, social services, international policies, environmental policies, infrastructure and energy independence as the main reasons driving her forecast. And among them, “INFLATION!” she writes in all caps.

The largest increase in confidence observed in this month’s polling came from directors in the health care sector, whose forecast jumped 11 percent, from 6.7/10 in April to 7.4 in May. They attribute their confidence to pandemic recovery and increased demand. 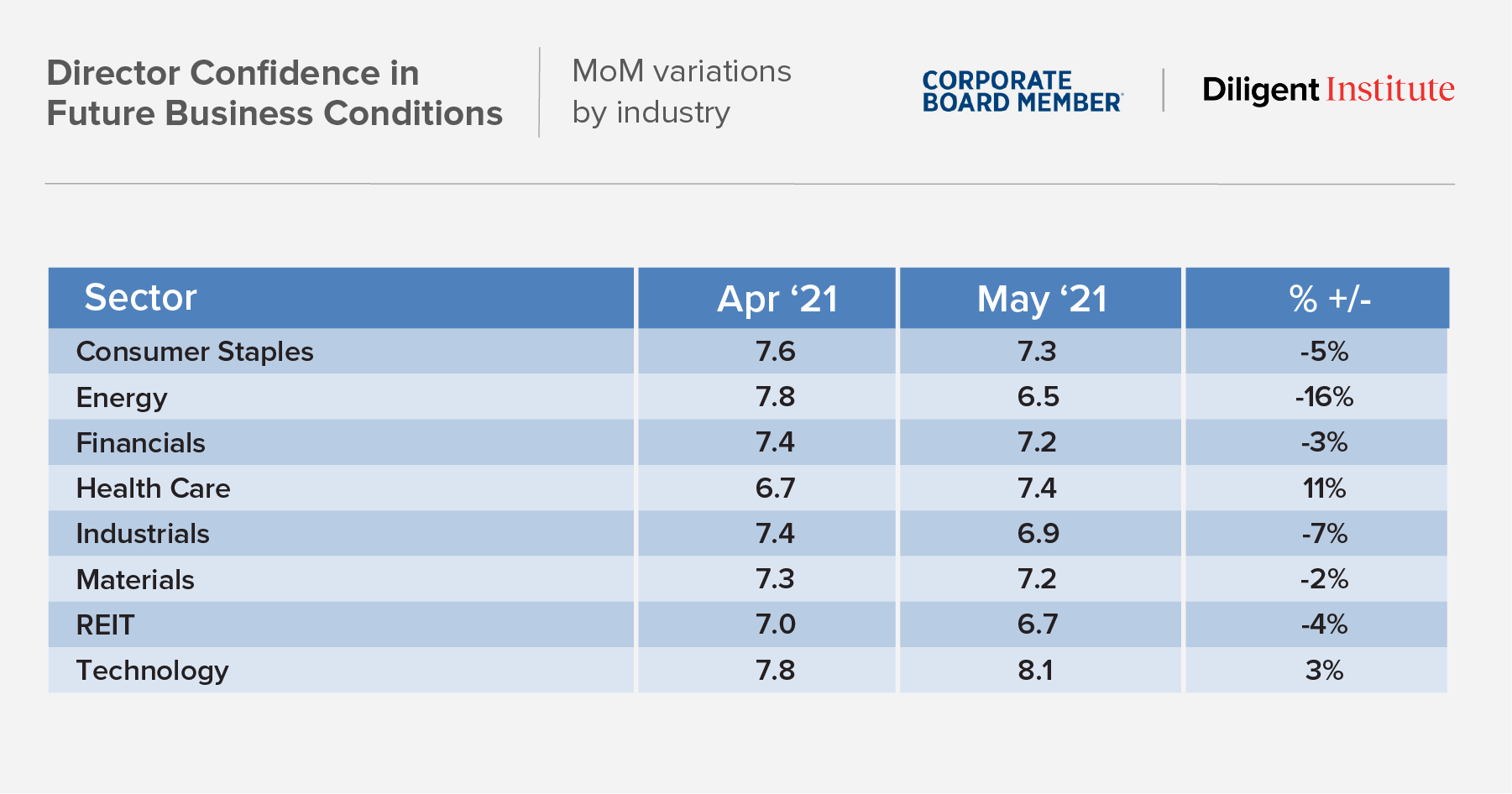 Despite business re-openings and job growth, many organizations continue to struggle to find qualified talent. When asked to rate the importance of talent attraction and retention to their corporate strategy, directors gave it a weighted average of 8.5/10, or “critical”, according to our
10-point scale. Only 2 percent of respondents rated it as below a 5—or “neutral”—and over one third (35 percent) rated it a 10—or “highly critical”—to their company.

Overall, 71 percent of directors say they are experiencing a “skilled talent” shortage; 55 percent say it is occurring at some of their locations and departments and 16 percent say the shortage is occurring across the entire organization. Another 13 percent say that while they’re not facing
this challenge at this time, they are concerned about it happening in the near future. 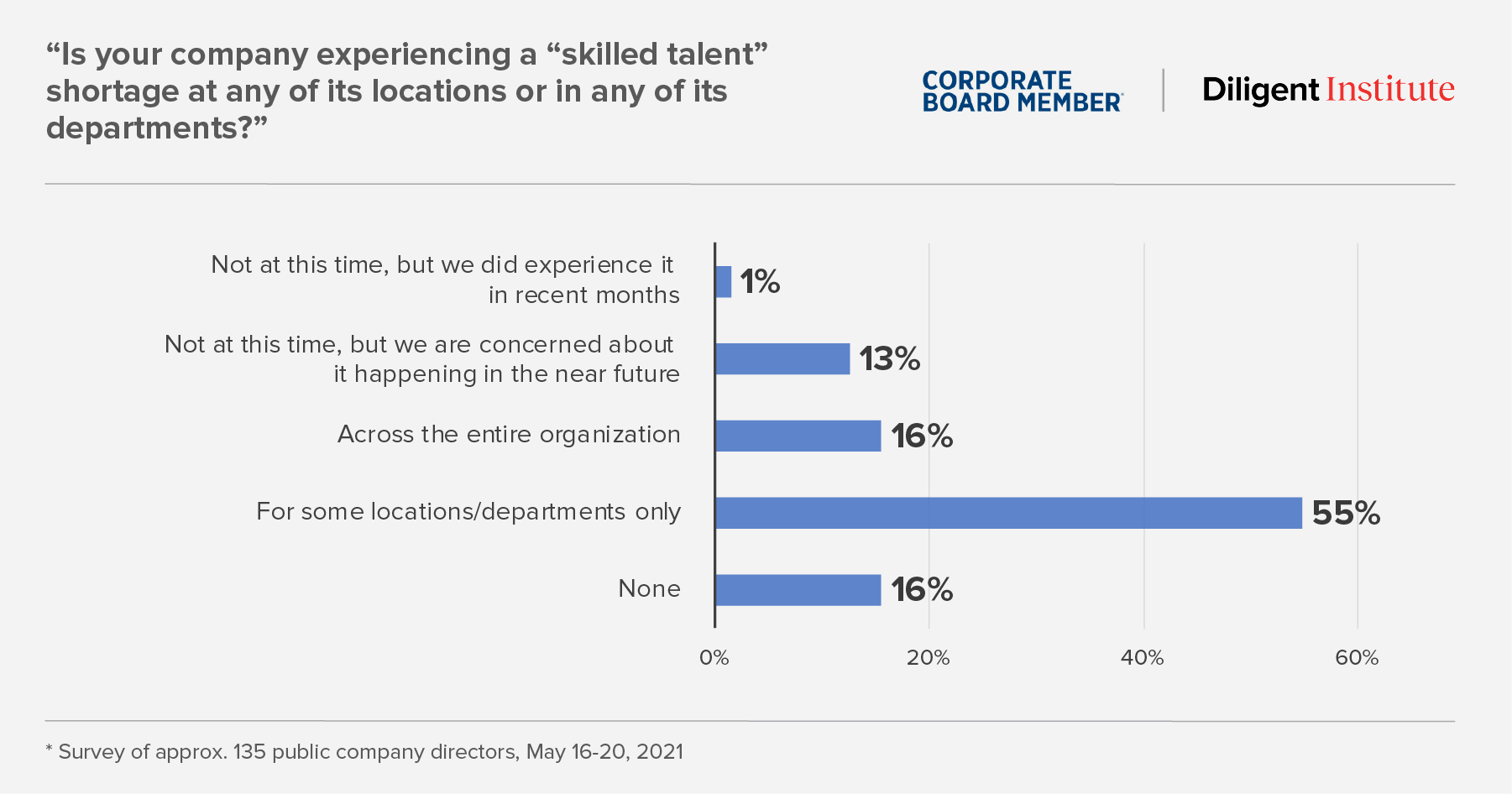 Among the measures taken to circumvent these circumstances and support talent attraction and retention, 47 percent of directors surveyed said their company has implemented a strategy to broaden recruiting practices—and an additional 24 percent say they’ve discussed doing so.

The second most popular strategy, according to 43 percent of directors, is increasing compensation packages—where an additional 31 percent report having discussed doing this as well. 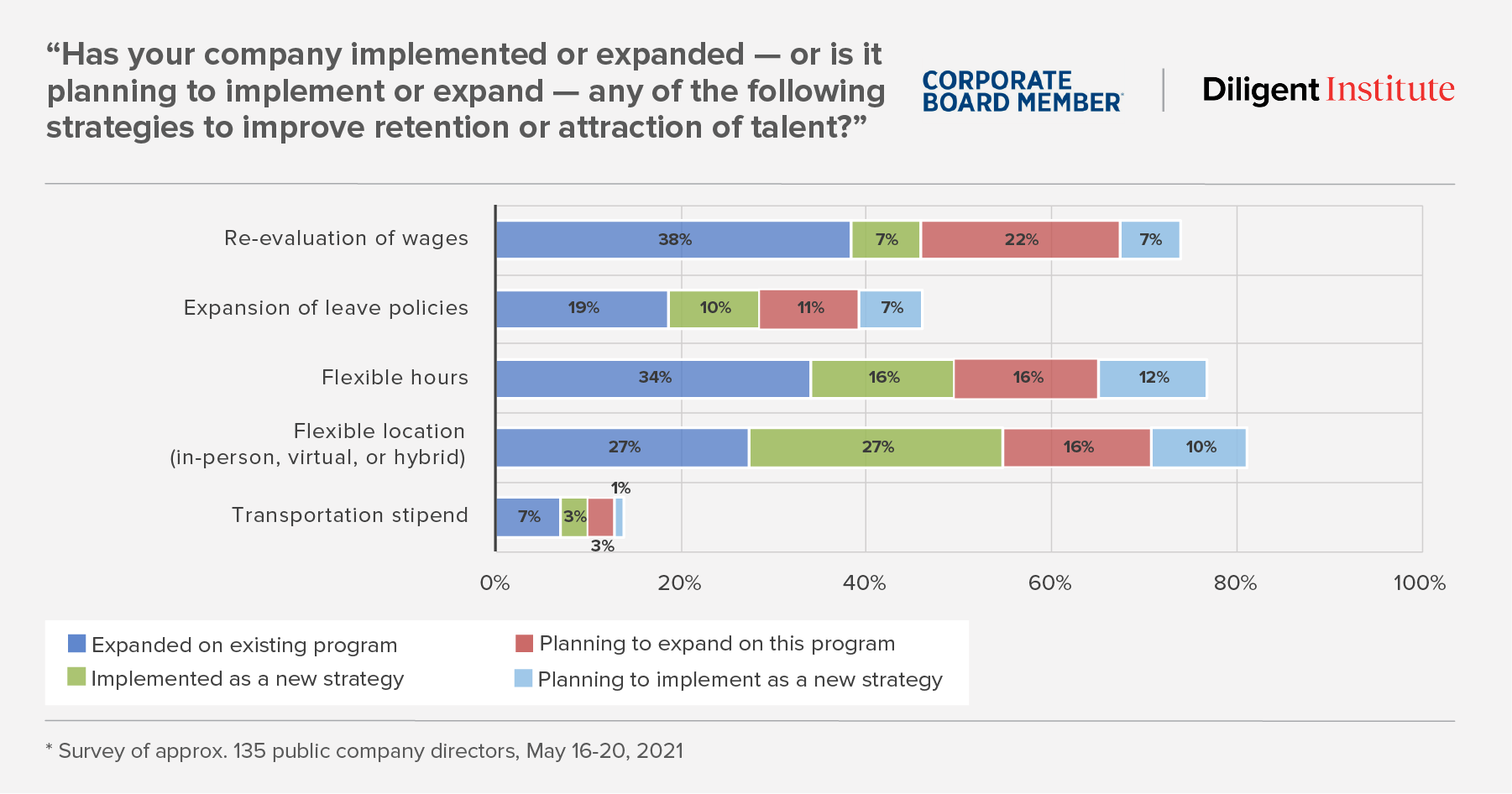 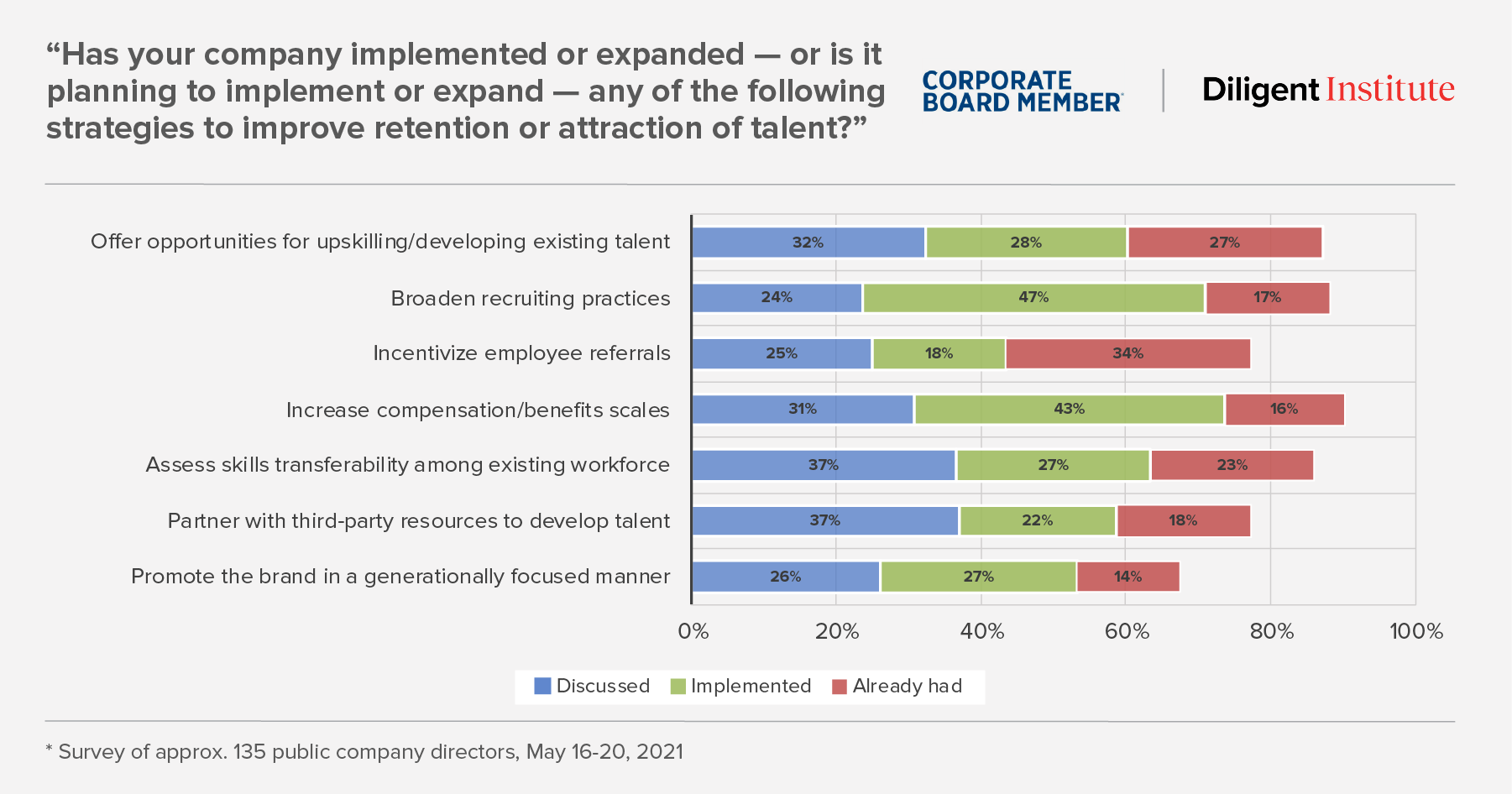 A director of a financials company says they have several vacant positions looking for workers: “With Covid pretty much in the rear-view mirror, hopefully the open positions can get filled quickly,” she says.