Concerns over the tight labor market, global supply chain, growing inflation as well as potentially historic government spending and tax increases are all taking their toll on the outlook in America’s boardrooms.

Our October sounding of director confidence shows a continuing—and accelerating—decline in predictions for the business climate a year from now, board members rate it at 6.5 out of 10—a drop of 8 percent since July’s reading and 13 percent since the leading indicator peaked in April. Directors’ outlook for November 2022 is now grimmer than their assessment of current business conditions, which actually increased this month, to 6.7/10 from 6.4 in September. 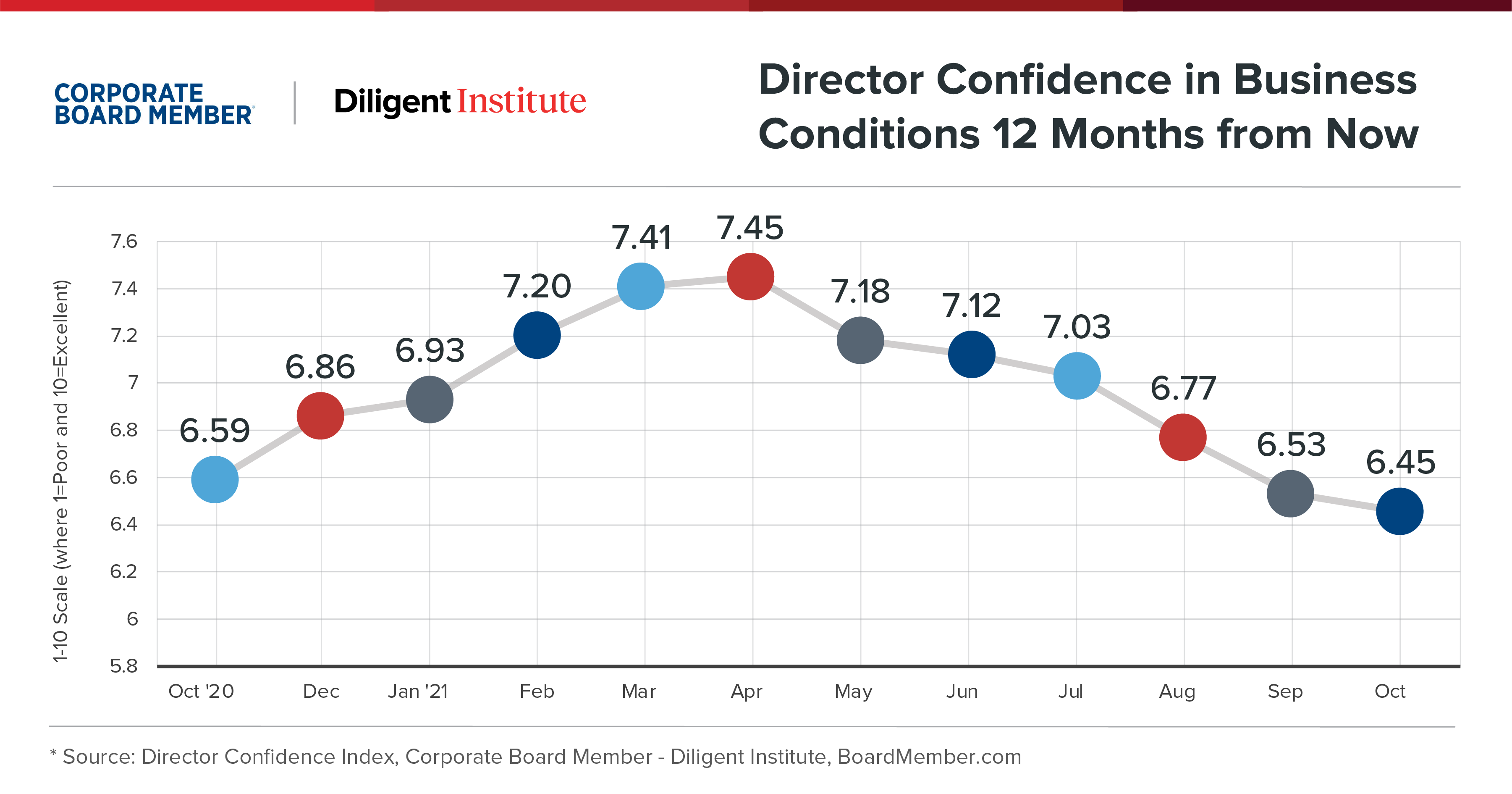 Those are the key findings from Corporate Board Member’s October Director Confidence Index, conducted in partnership with Diligent Institute, which polled 227 U.S. public company board members October 25-31 about their forecast for business in the year ahead. The forward-looking index is now at its lowest level since the poll’s inception in August 2020—well before the Covid-19 vaccine. 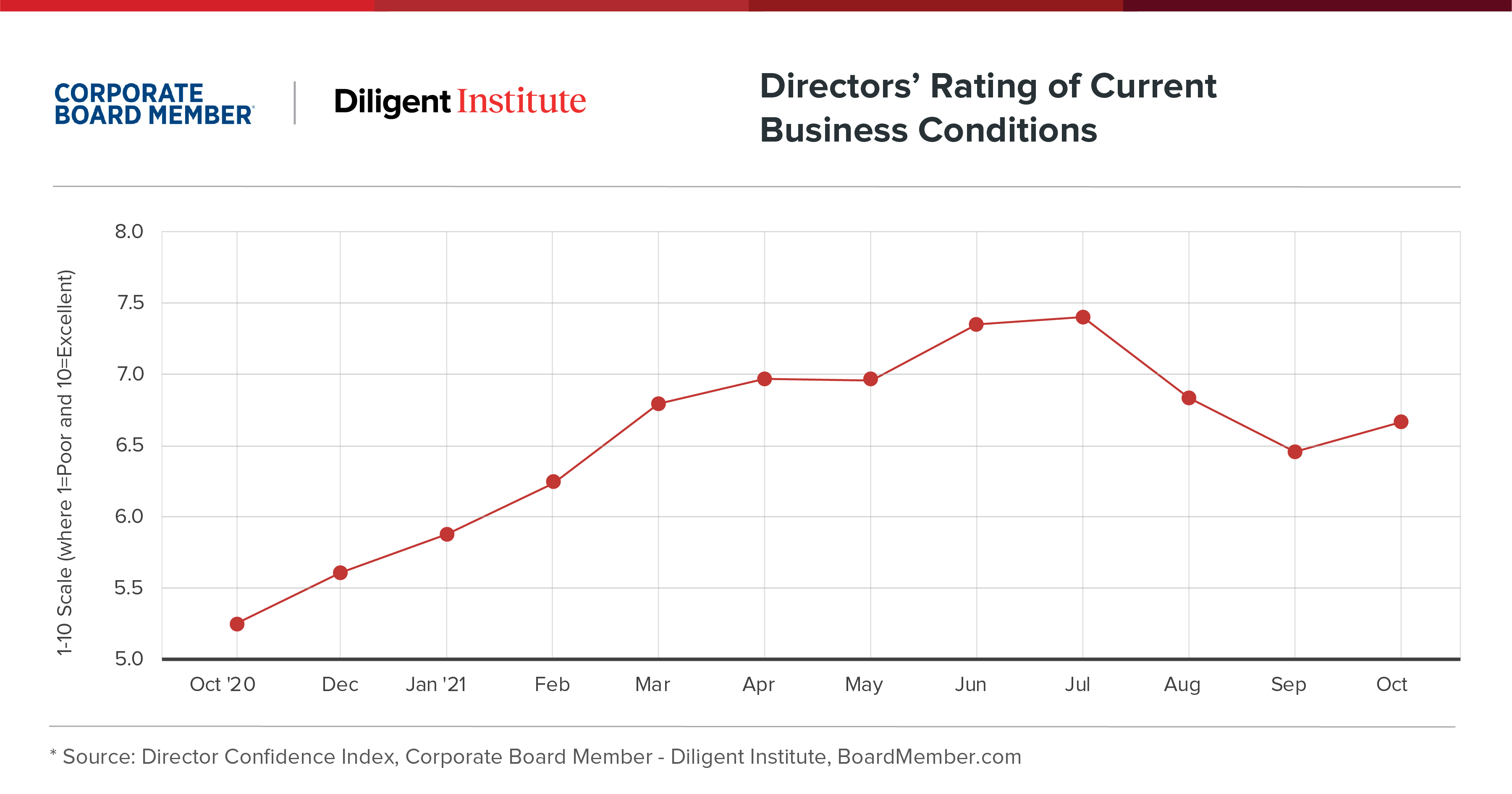 Bob Ducommun, director at Ducommun Incorporated, a CA-based aerospace and defense company, is among the growing proportion of board members who forecast business conditions 12 months from now to be worse than they are today. “Increasing federal deficits, higher interest rates, and possibly declining value of the dollar,” are the reasons he expects conditions to be “weak” (at 4 out of 10) in November 2022, down from a 6/10 rating today.

“I expect there to be weak macro-economic conditions,” says Michael Renna, director at South Jersey Industries, a publicly held energy services holding company, when asked to forecast future conditions. He rates the current environment a 5 out of 10 but expects them to decline two points by this time next year. “Higher taxes, employee turnover and inflation will lead to an unenthusiastic business climate,” he says. 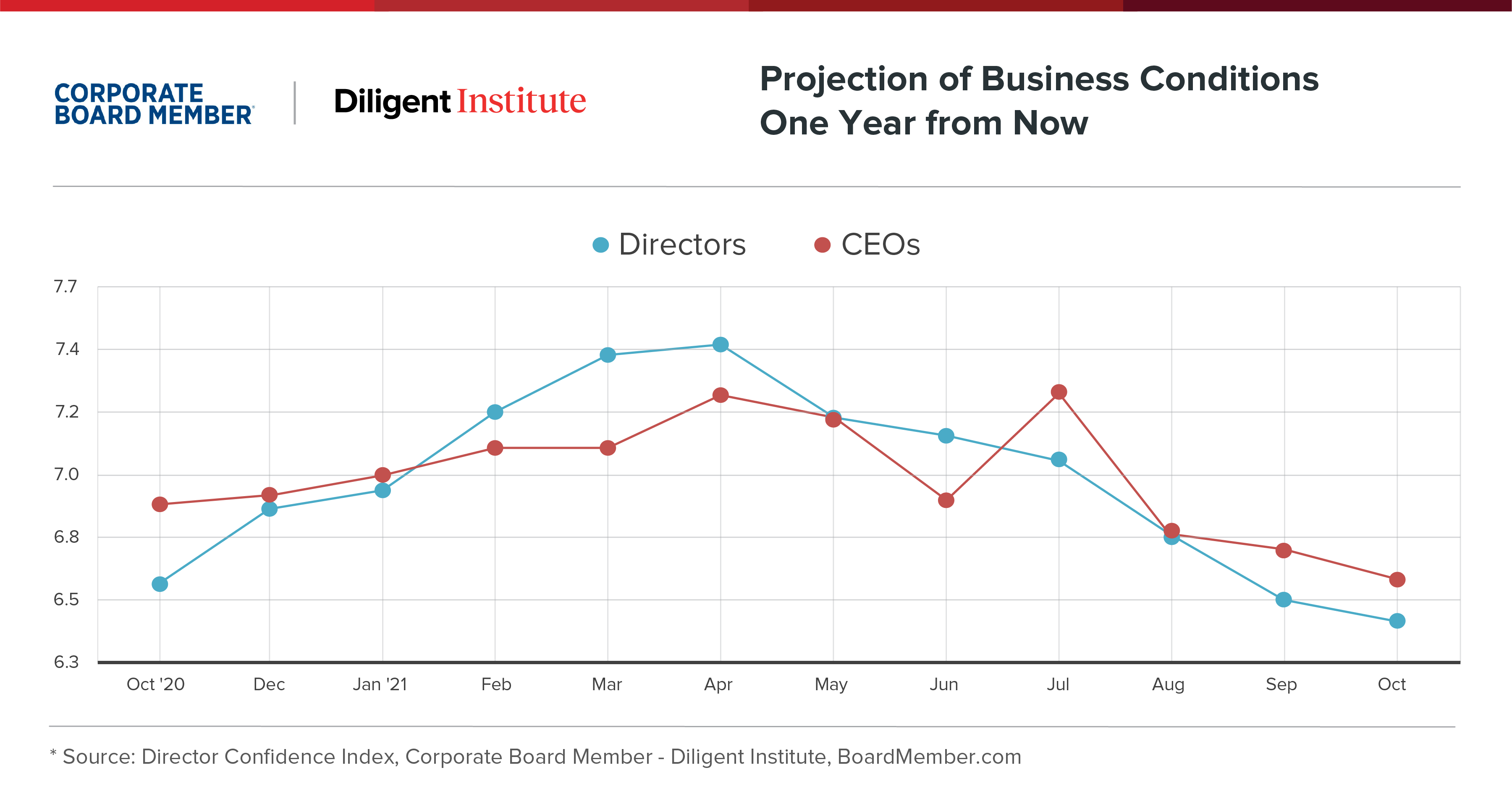 Overall, 41 percent of directors polled in October say they expect conditions to deteriorate over the coming year—an increase of 14 percent since September and a larger proportion than we found among CEOs in polls by our sister site, Chief Executive.

“Global growth is slowing…particularly China. U.S. Inflation is more than transitory with supply chains requiring more time to become normalized. Cost of serving overall debt build up will start becoming more of a burden,” says Brad Oates, director at CIT Group, to explain why he expects conditions to deteriorate.

Nevertheless, 35 percent of directors continue to show optimism that conditions can improve. Their reasons include a better handle on the pandemic, excess cash in both businesses and households, increased consumer demand and spending, growth in tech investments and anticipation that global supply chains will work themselves out over the course of the next year.

Cathy Minehan, director at Bright Horizons, a provider of employer-sponsored child care, is among those directors who expect conditions to improve in 2022. “There will still be excess demand remaining from the restrictions of the pandemic a year from now. The return of leisure travel in addition to business travel will create growth in many industries,” she says, adding “The use of savings accumulated during the worst of the slowdown as government and other income supports kicked in will drive consumer spending.”

“I do believe current inflation will recede a year from now, as supply chain issues work themselves through the economy,” says Peter Bain, director at CT-based asset management firm Virtus Investment Partners, who expects conditions to be “very good” at 7/10 by this time next year. “I also believe the infrastructure bill together with a scaled-back “Build Back Better” will have passed, providing some clarity on government investment going forward,” he says. 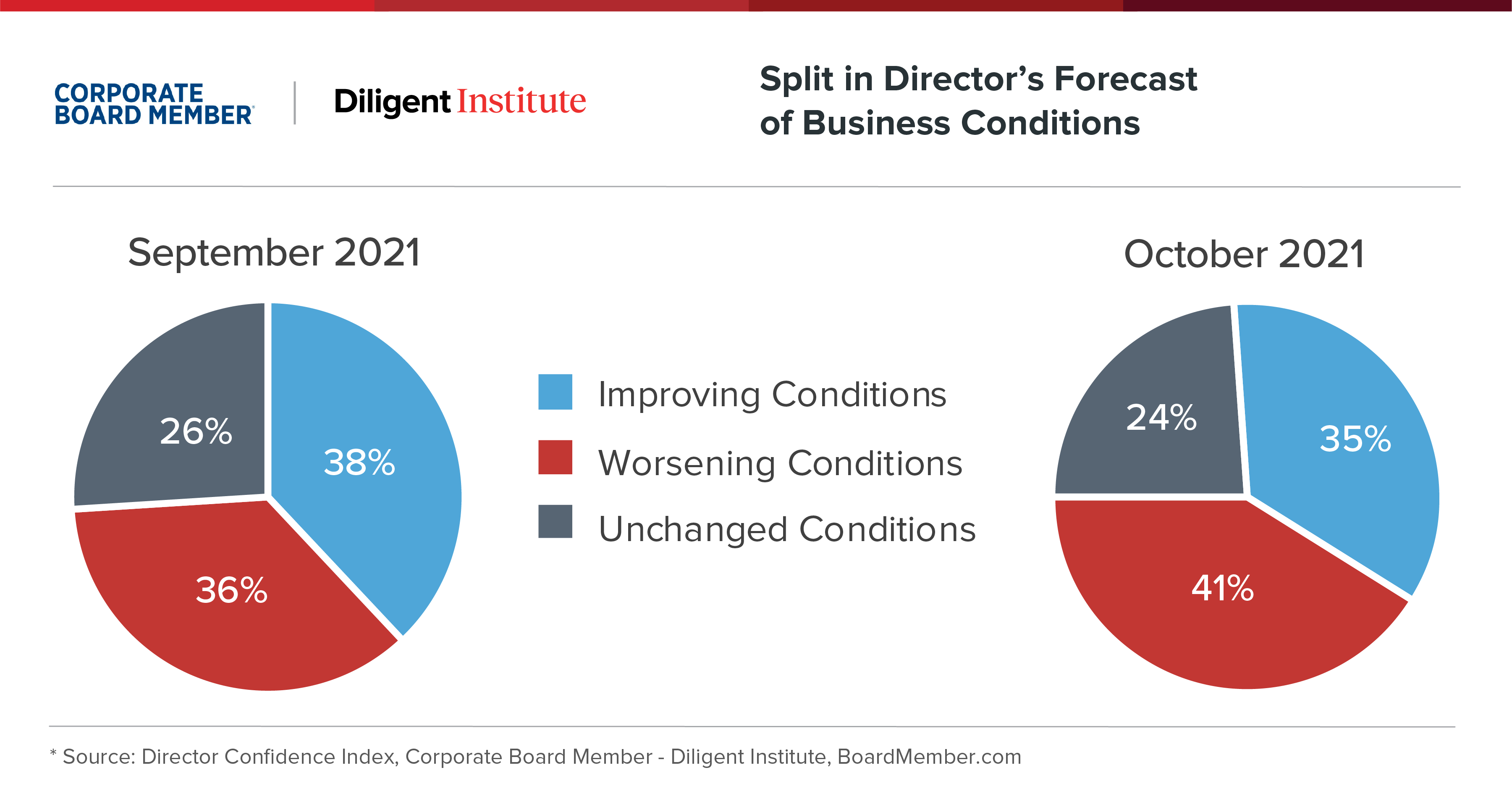 The proportion of directors forecasting increases in revenues and profits for their firm in the year ahead declined further in October, now at 82 percent and 73 percent, both down 4 percent since September. Those are the lowest levels on record since February. 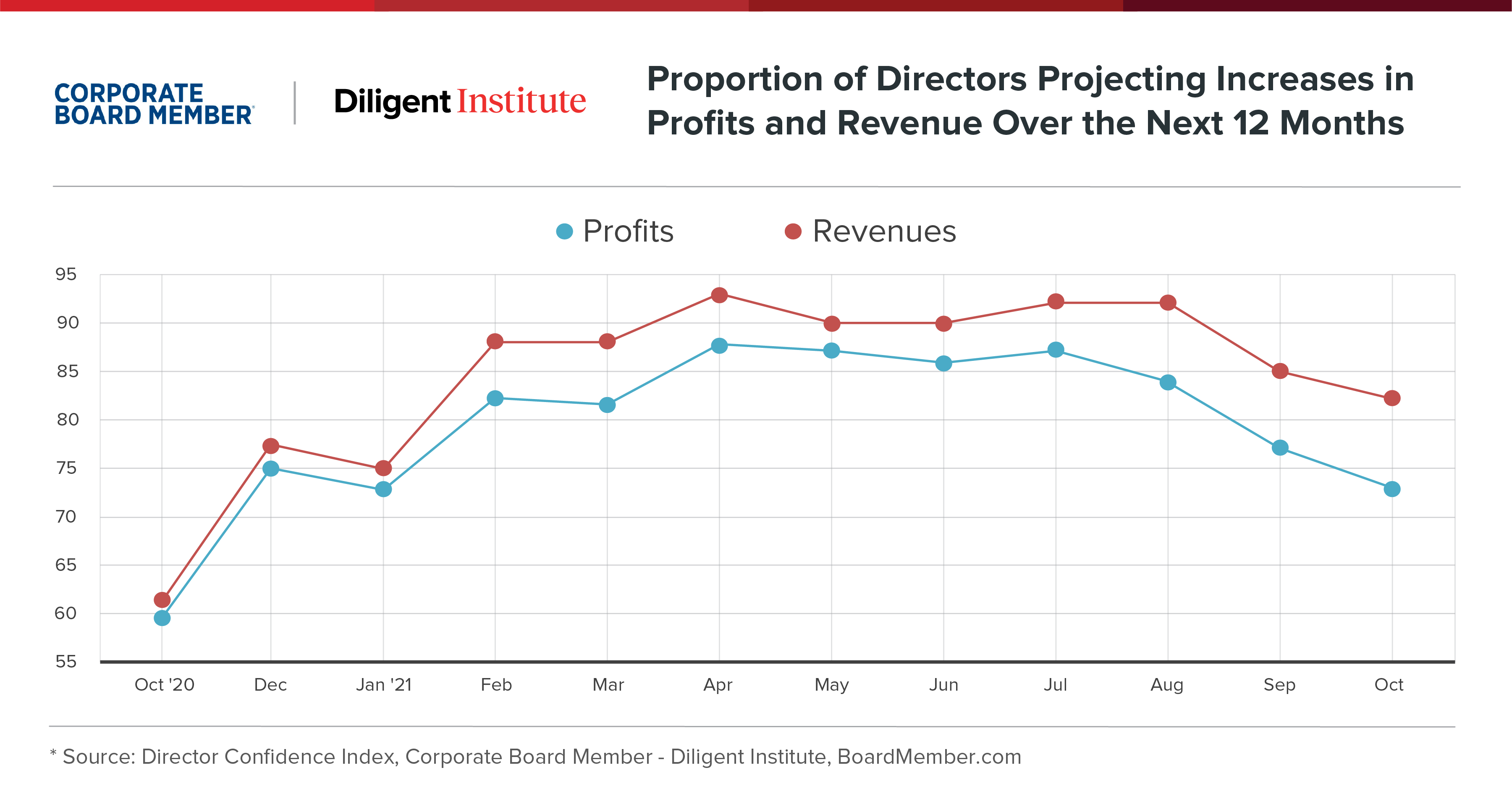 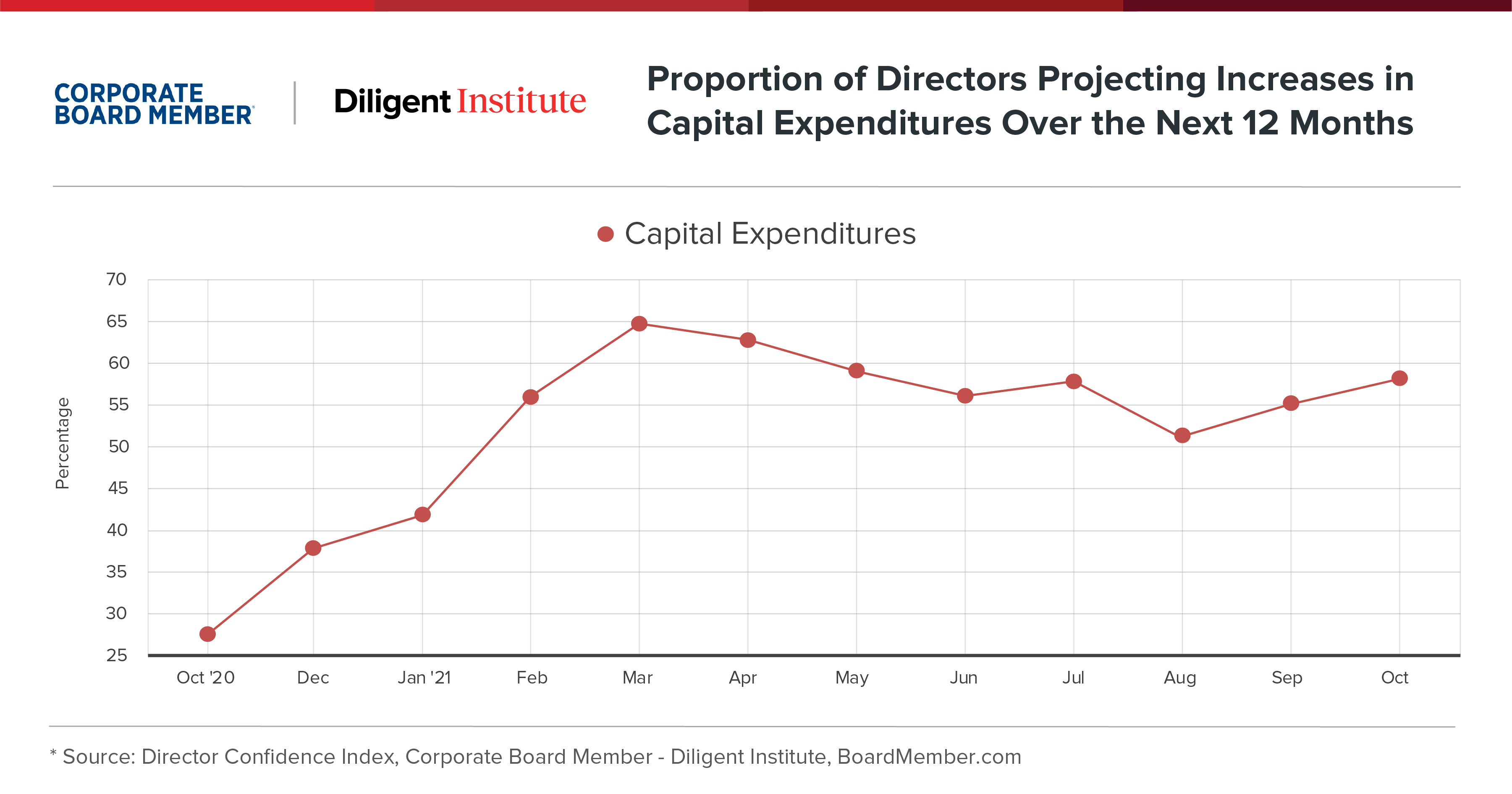 Audit and the Board

With the proliferation of non-traditional risks, public company board members have been tackling a growing agenda of issues over the past few years. Yet, 40 percent of directors polled say their audit team is only sometimes or rarely involved in strategic discussions with the board—and an additional 8 percent say never. 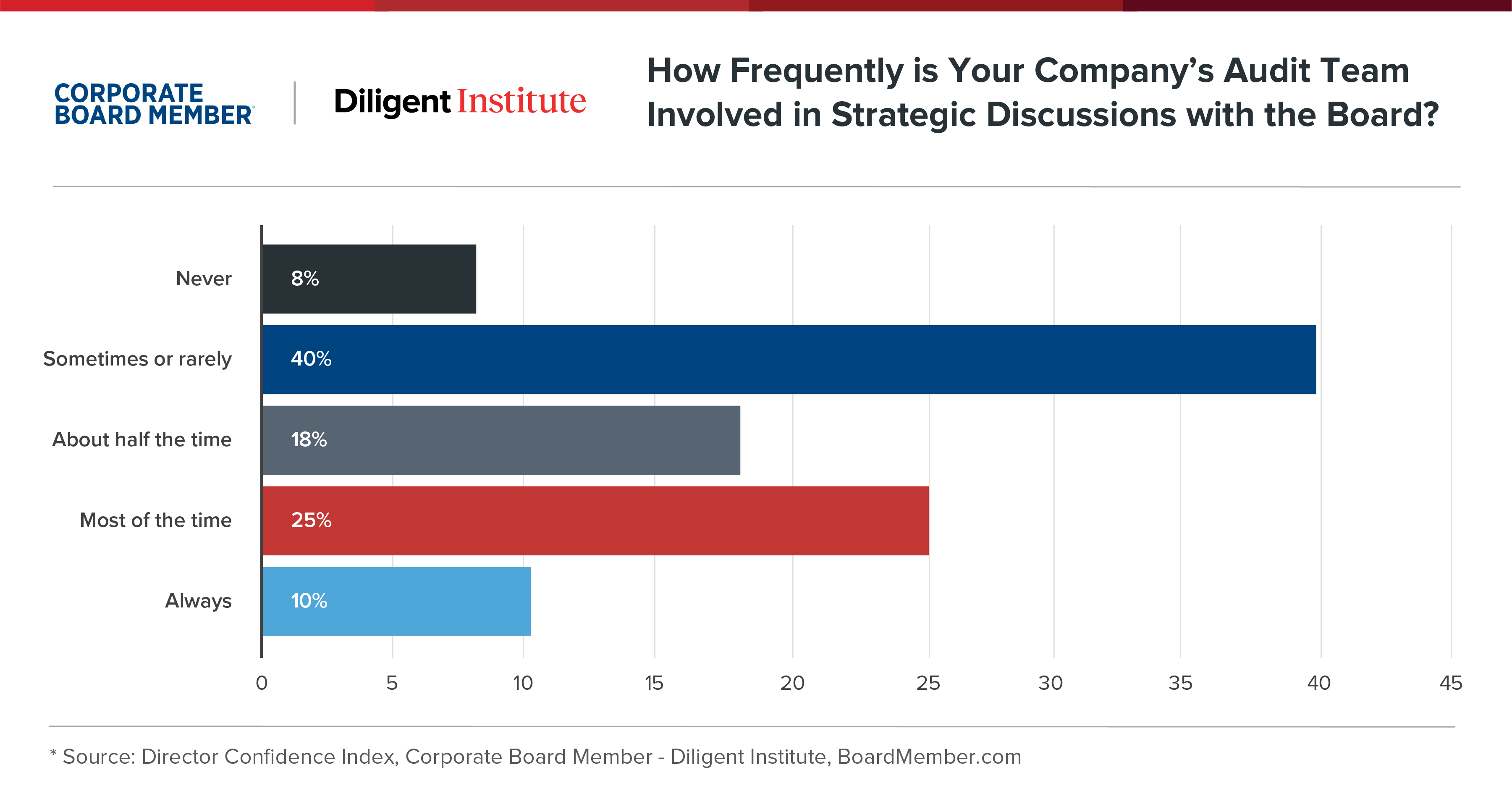