Uneven economic reports and uneven earnings readouts this week would seem to suggest that there’s some uncertainty about whether or not the economy is heading into recession. But if you ask public company directors—as we did this week—what they think, the verdict is clear: when it comes to a looming recession, it’s no longer a question of ‘if’—it’s only a question of when

After a 6 percent decline in September, our Director Confidence Index lost another 10 percent in October, falling into “Weak” territory for the first time since the DCI’s inception in the fall of 2020. At 4.98, the leading indicator is now 23 percent off its January level of 6.45—which was the high point for the year.

According to the latest data, collected in partnership with the Diligent Institute between October 24-26 among nearly 100 U.S. public company board members, 52 percent of directors expect U.S. business conditions to deteriorate over the next 12 months, up 11 percentage points from 41 percent in September.

Directors’ rating of current business conditions also fell in October, to 5.48 from 5.61, as measured on a 10-point scale where 1 is Poor and 10 is Excellent. The 2 percent drop came on the heels of September’s 8 percent retraction, culminating in a double-digit decline and a 21 percent slide from its highest point of the year, 6.90, in February.

All of that, directors say, is due to the expectation that a recession in the U.S. in 2023 is no longer avoidable. After reports of recession and significant slowdowns in Germany, Britain and other parts of Europe, as well as China, a stunning 86 percent of directors polled say if we aren’t yet in a recession, we are about to be. The question remains as to the length and severity. 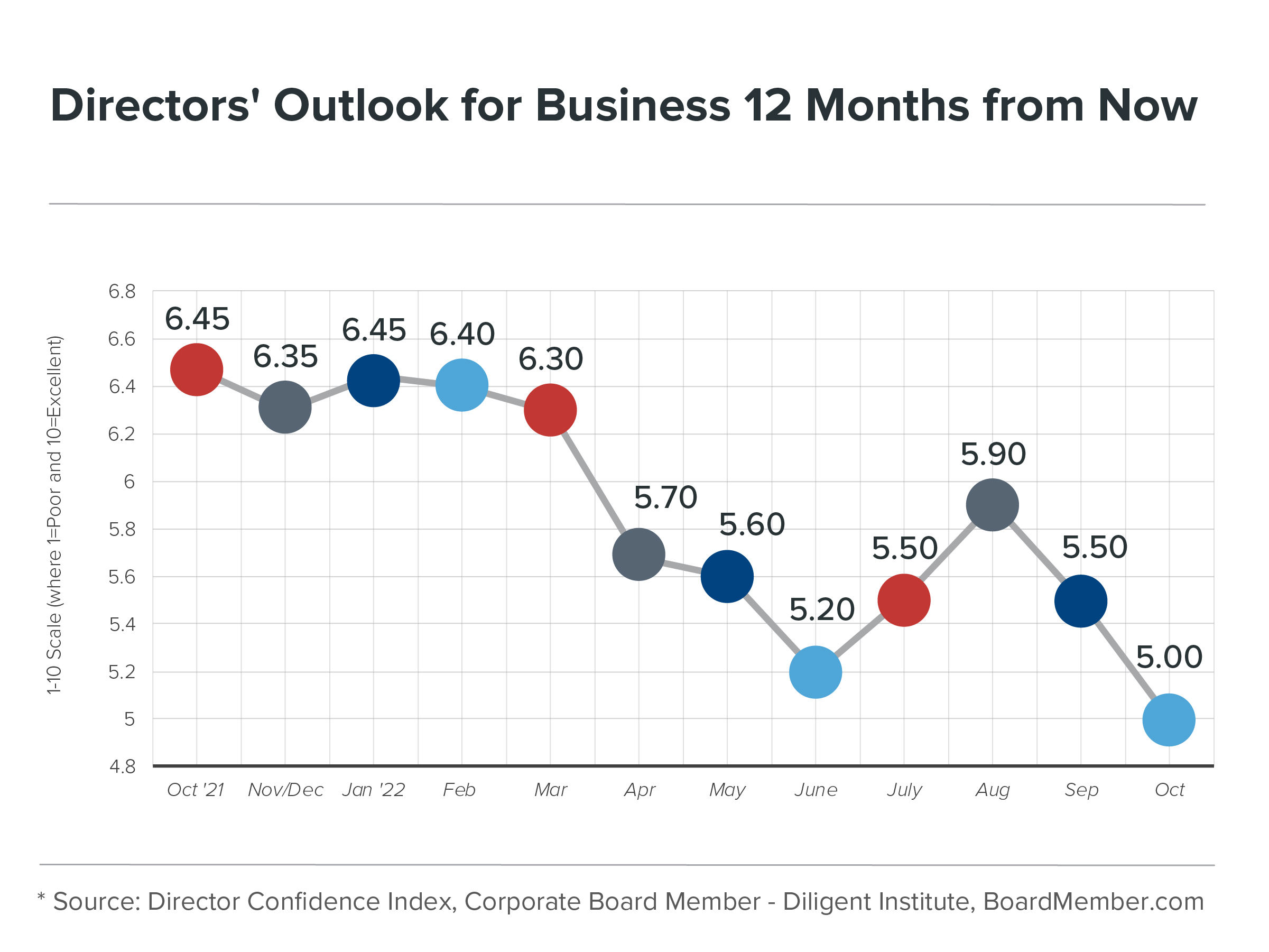 This aligns to information out of Diligent Institute’s Corporate Sentiment Tracker, an AI-based tool monitoring the issues corporate leaders are speaking about most frequently in the news, and whether they are speaking about those topics in a positive or a negative way. At the time this article is being written, “Economic Risk” is the top ESG topic being discussed in the last two weeks, and the top single terms are “inflation,” “recession” and “future,” in that order.

Beyond a looming recession, directors say their outlook is also being weighed down by increasing debt levels, capital availability and a continuously strong dollar, which many blame on poor political moves.

“The government is getting in the way of smart business,” said the chair of a tech company. “We went from a safe world with China, Russia and North Korea behaving and participating in the world community to now…. Pretty much chaos currently.”

“Current government is loading too many social initiatives into the budget like forgiveness of student loans while restricting investment in oil and gas. Thus, the drivers of inflation are still being fueled,” said one director at a Financials corporation, who also forecasts business conditions to fall to a 3 in 2023.

After two months of narrowing, the outlook gap is once again widening, with a growing number of directors expecting things to get worse in 2023—and a declining proportion forecasting the status quo or improvement. As illustrated below, this is a similar trend we observed in April, when initial reports of record-high inflation came out and 61 percent of directors then forecasted a deterioration of business conditions in the U.S. over the following 12 months. 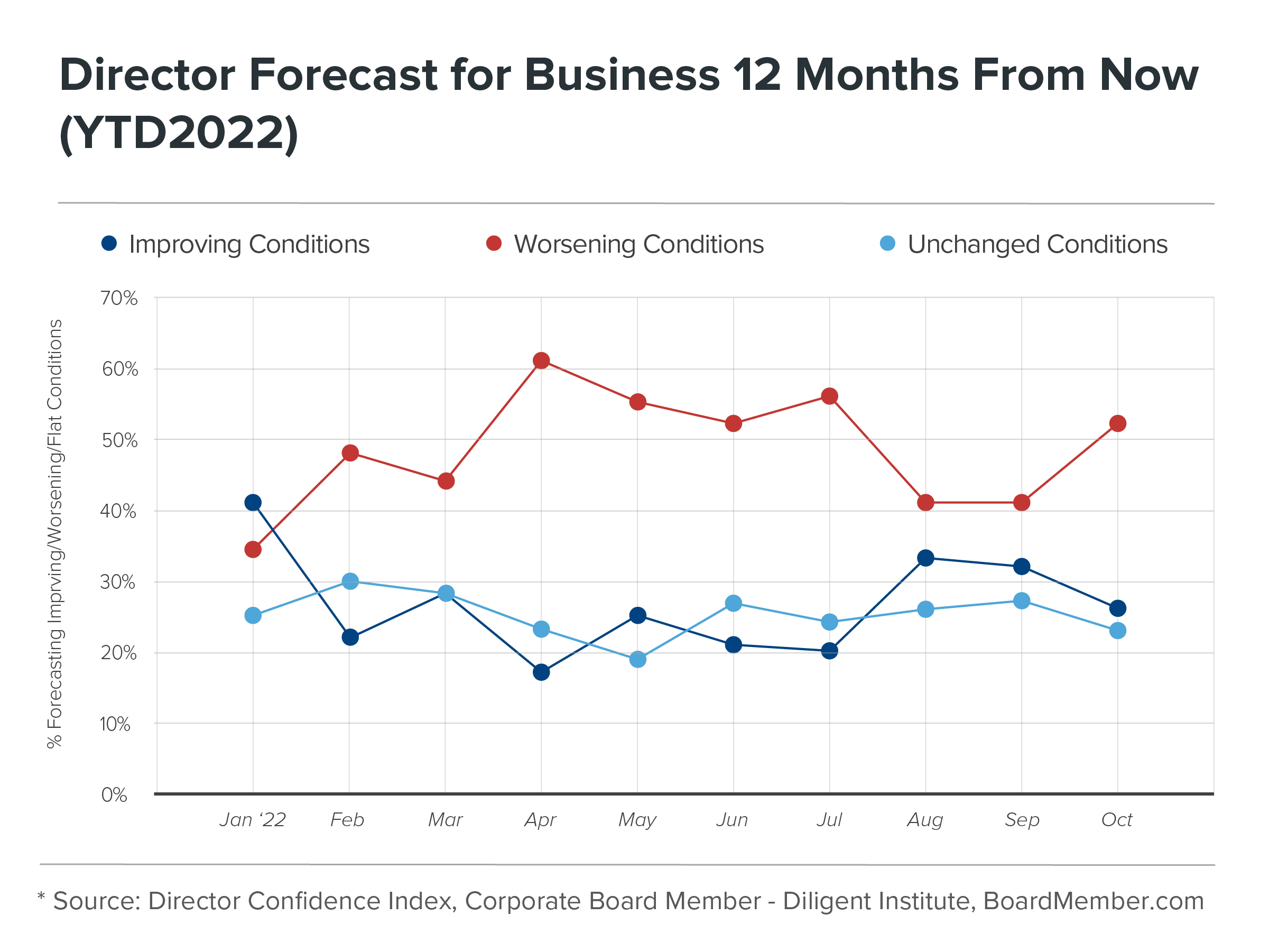 This time, while inflation remains a top contributor to the negative outlook, the potential for a recession in the U.S. is also becoming more palpable in boardrooms. A third of directors polled this last week of October say the U.S. is already in a recession, and 54 percent say, “not yet but we are surely heading for one.” Only 14 percent believe there are reasonable chances we may avoid one.

“Inflation will be stubbornly persistent, and a recession is inevitable,” said a director at an Energy company who forecasts conditions to fall to a 3 out of 10 by fall 2023. 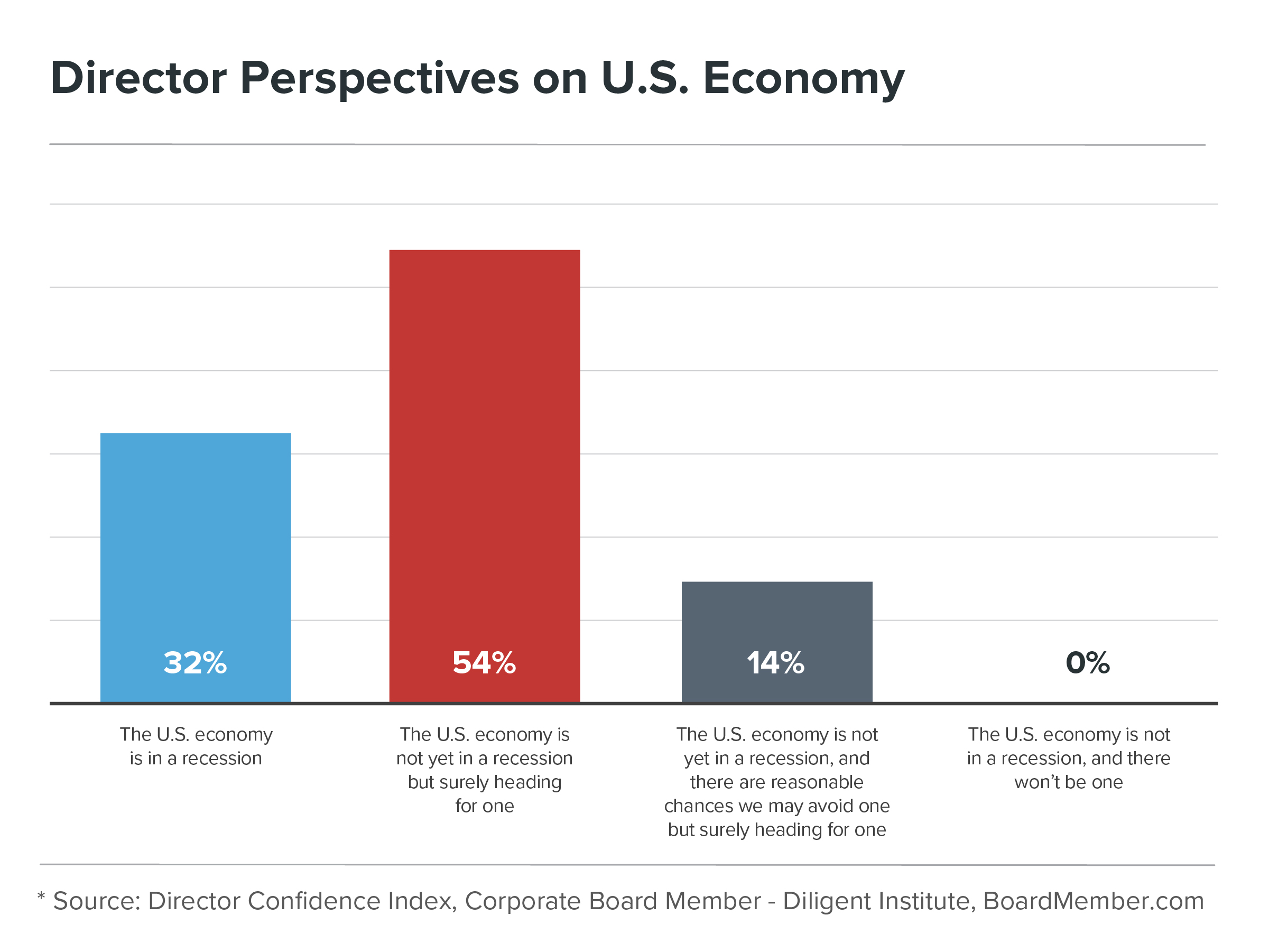 Over the past few months, some directors have been noting they believe the recession is becoming a self-fulfilling prophecy, as companies adjust their strategy to account for a downturn despite seeing no shortage of demand.

“If we act as if there is going to be a recession, there will be one due to people taking anticipatory steps to protect their businesses,” said a director in the healthcare space echoing the sentiment we’ve been observing for months now.

“The factors that are causing pullback are not destroying demand, just deferring it, so if things stay stable at this level, then those purchases will continue and even increase,” said another board member participating in the poll.

Many say they fear the Fed will also overshoot the monetary policy and cause a deeper recession than necessary. In fact, several of the directors responding to the survey mentioned their lack of confidence in the federal government’s ability to steer the economy in the right direction.

“Business is currently strong, with supply chain restrictions easing. Fundamentals in U.S. could be good, but there’s too much rhetoric and fear pushing bad decisions economically. So, I’m worried that this will deteriorate business outcomes over the next 12 months,” said a director of a large Industrials company.

Overall, 47 percent of directors polled say demand is up when compared to a year ago, and an additional 22 percent say it has remained stable. Those number change, however, when forecasting demand in 2023, with 41 percent of directors saying they expect demand to fall, though most of them only expect that to be a small drop. 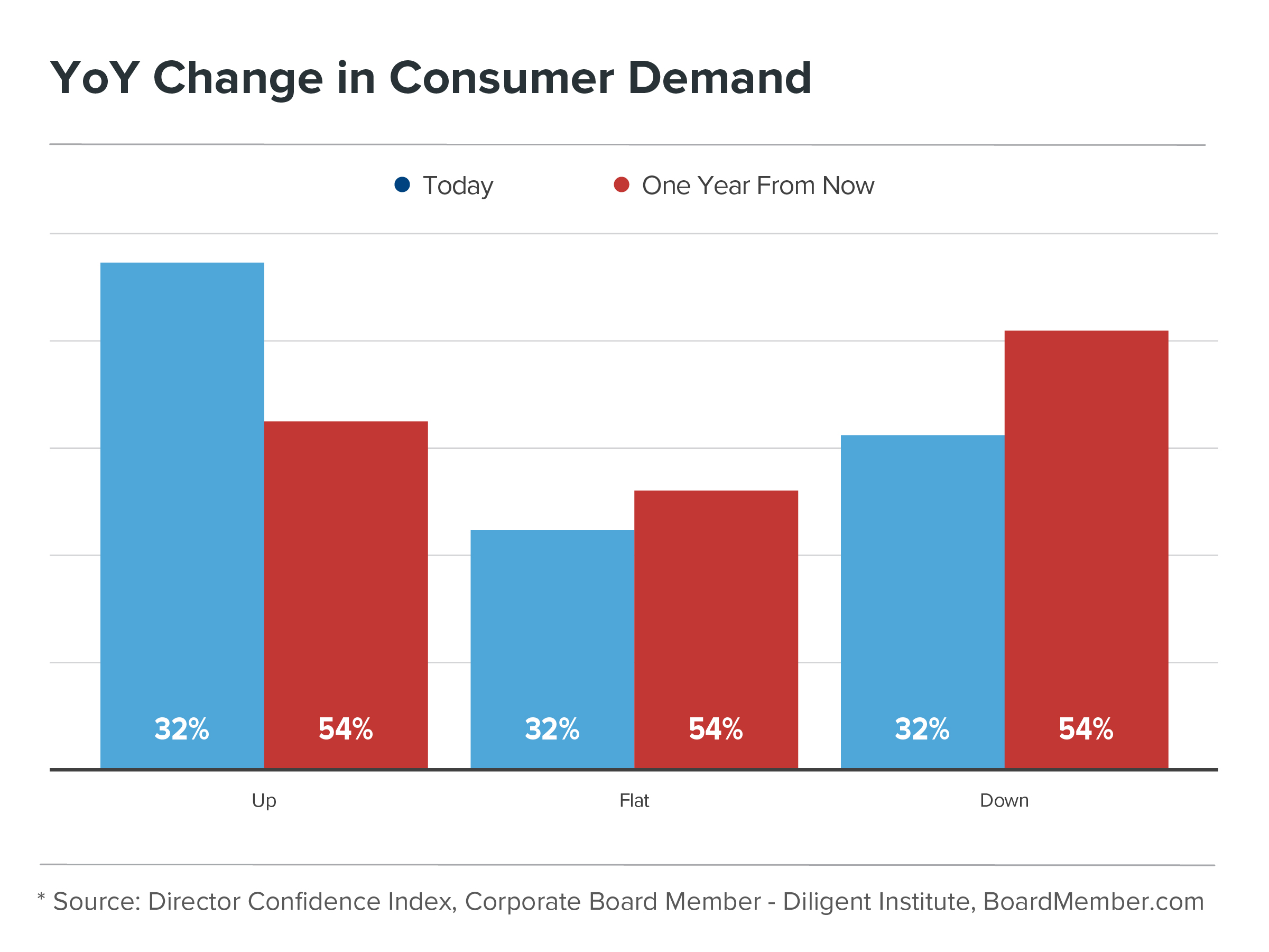 When asked to share their forecast for how this environment is affecting their individual companies, 35 percent of board members surveyed said they expect profits to be down by this time next year (up from 26 percent in September), and 27 percent said the same of revenues (also up, from 23 percent the month prior).

When looking at those expecting profits and revenues to increase, we find 49 and 58 percent of directors, respectively, forecast improvements in those areas, down from 54 and 33 percent in our last polling.

The situation is similar for capital expenditures: 35 percent of directors don’t expect their company to increase capex in the year ahead—vs. 20 percent last month. Though interestingly, while the majority last month said they were staying the course for the time being, only 30 percent maintained that strategy in October, as 35 percent said they are seizing opportunities for the recovery. 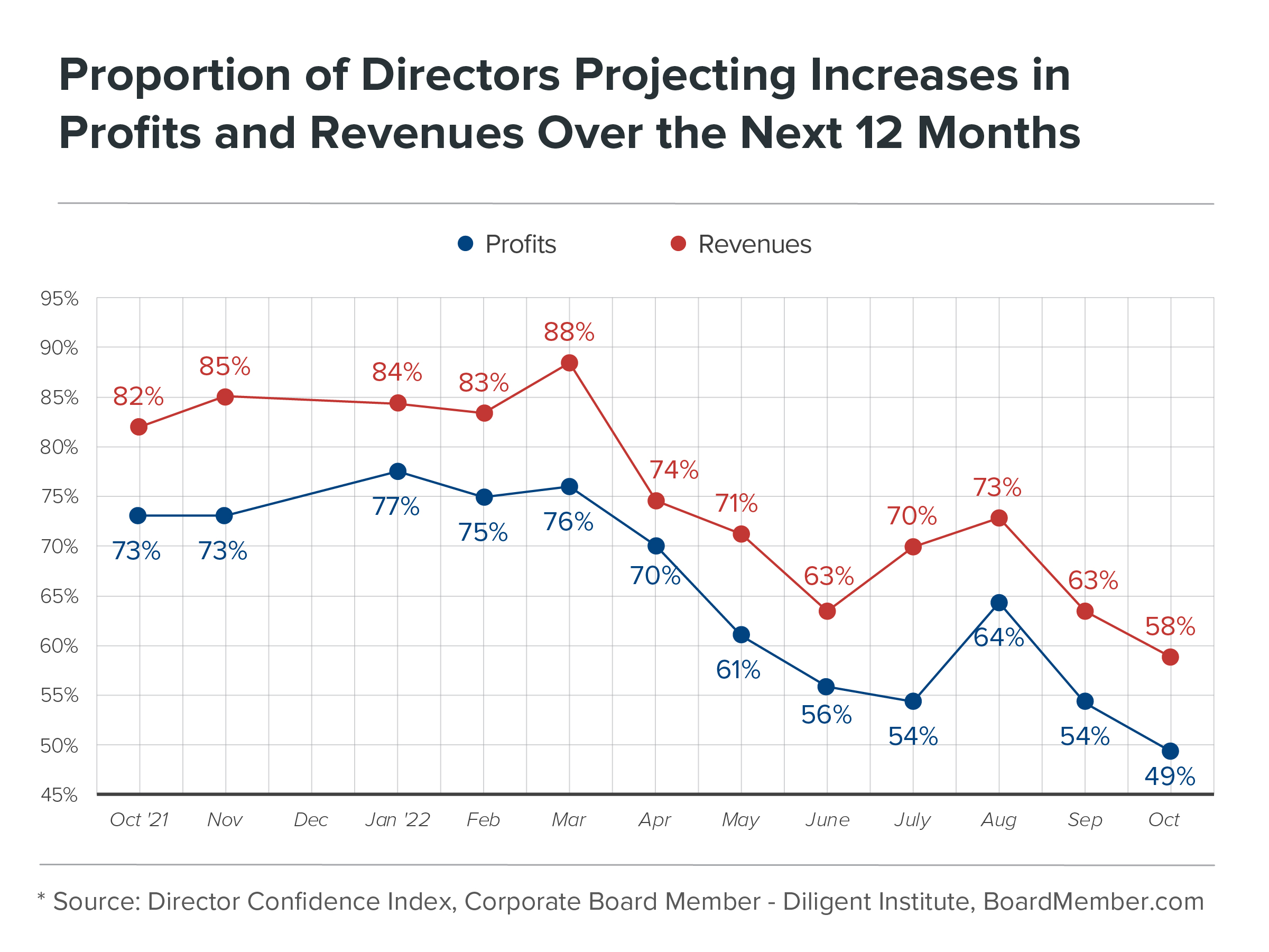 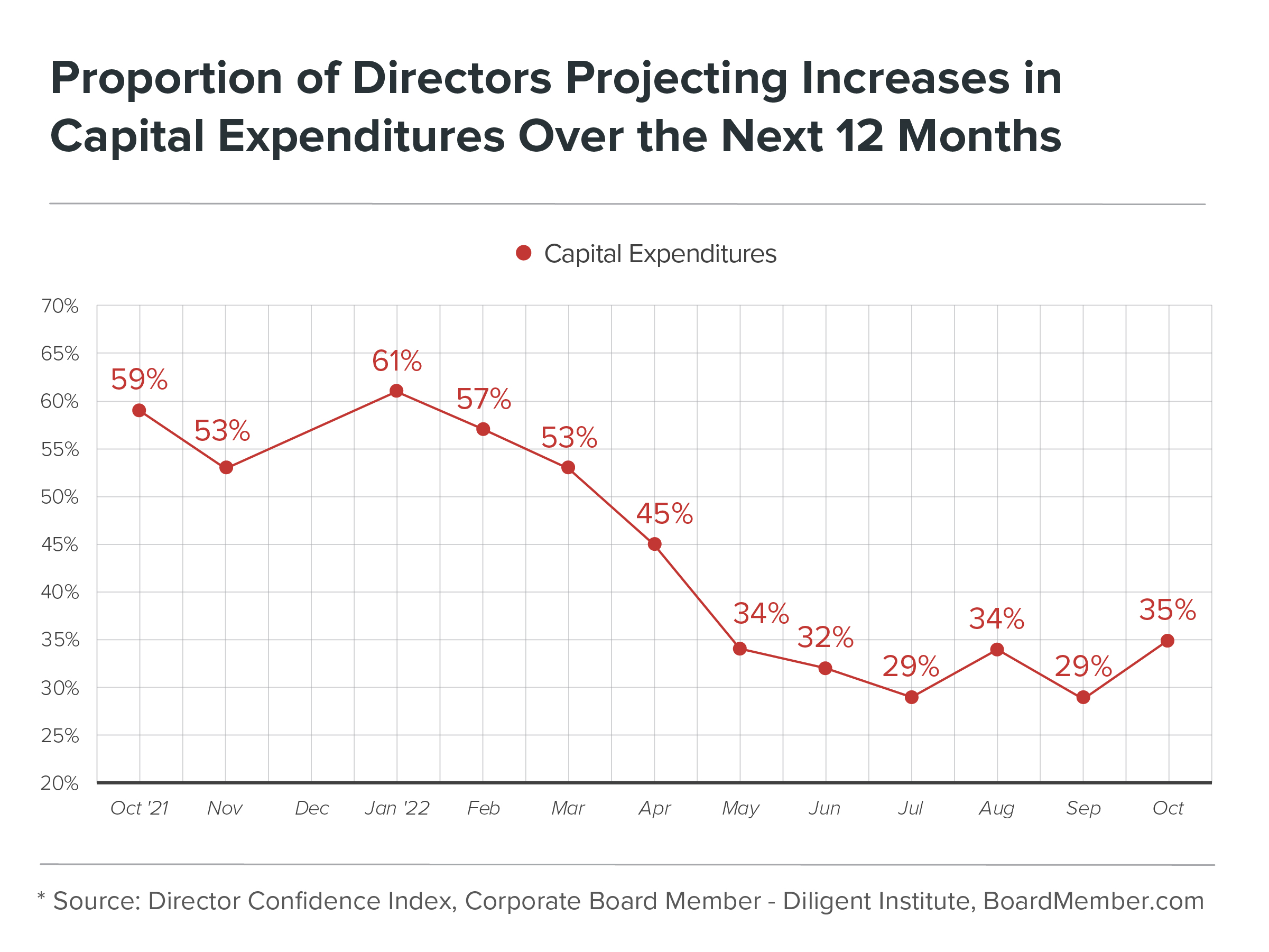 Many factors are affecting guidance and forecasts for the year ahead but turns out, who controls Congress isn’t one of them, according to a recent survey of 300 U.S. directors.

With all the talk surrounding the upcoming midterm elections and the impact governmental policies have on business, public company board members aren’t putting too much weight into who wins in November.

In our annual What Directors Think survey, conducted with the Diligent Institute from August 29 to October 7, 300 board members at U.S. public companies shared their thoughts on the midterm elections, the 2024 presidential election and everything in between.

Perhaps the most important to bear in mind is that few expect the outcome of the midterms to affect their planning and strategy significantly. Fifty-three percent of directors polled say the impact from the presidential election will be “significant” vs. 23 percent who feel the same about the upcoming midterms.

This aligns to information out of Diligent Institute’s Corporate Sentiment Tracker, and AI-based tool monitoring the issues corporate leaders are speaking about most frequently in the news, and whether they are speaking about those topics in a positive or a negative way. At the time this article is being written, “Economic Risk” is the top ESG topic being discussed in the last two weeks, and the top single terms are “inflation,” “recession” and “future,” in that order. 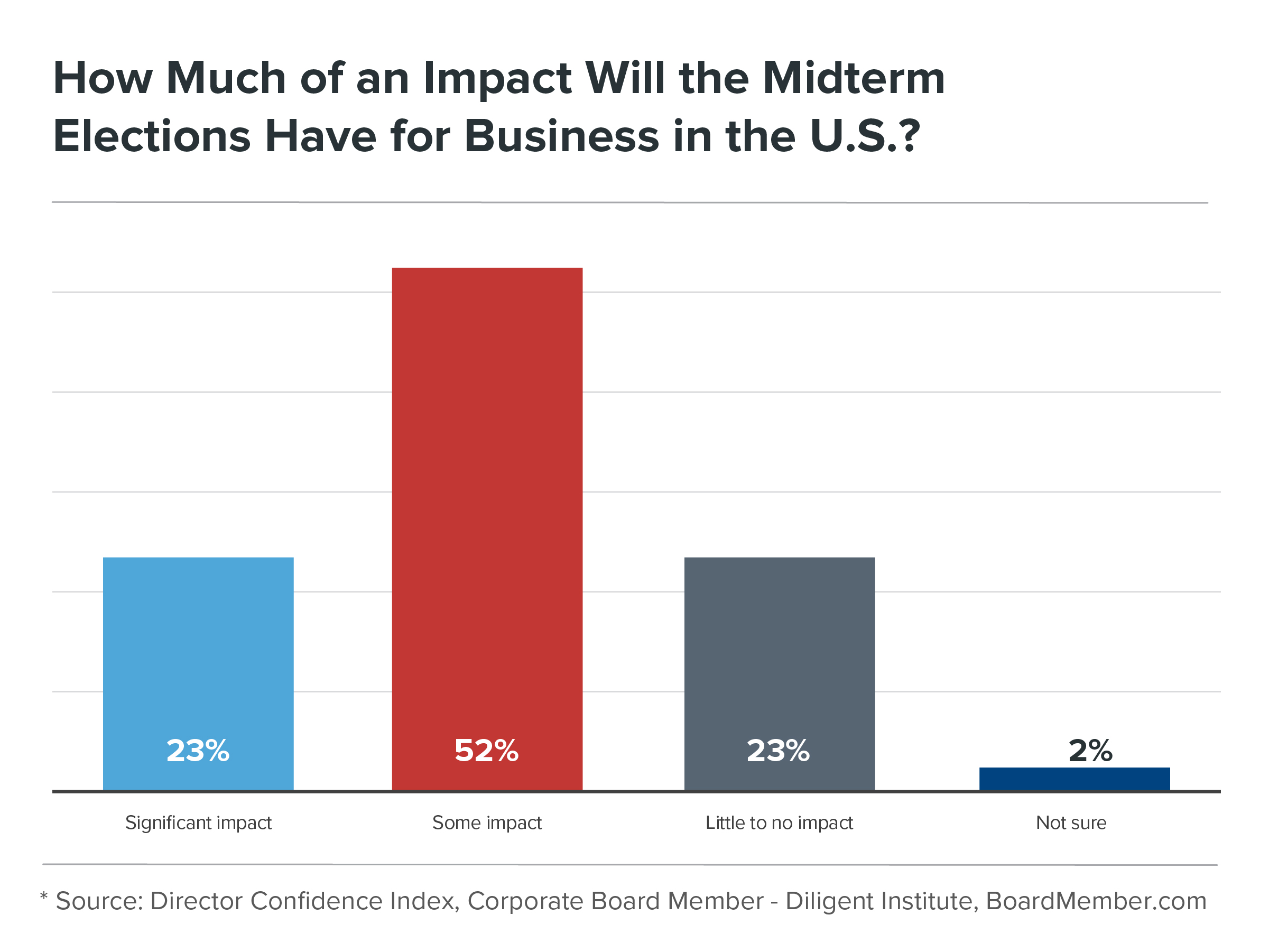 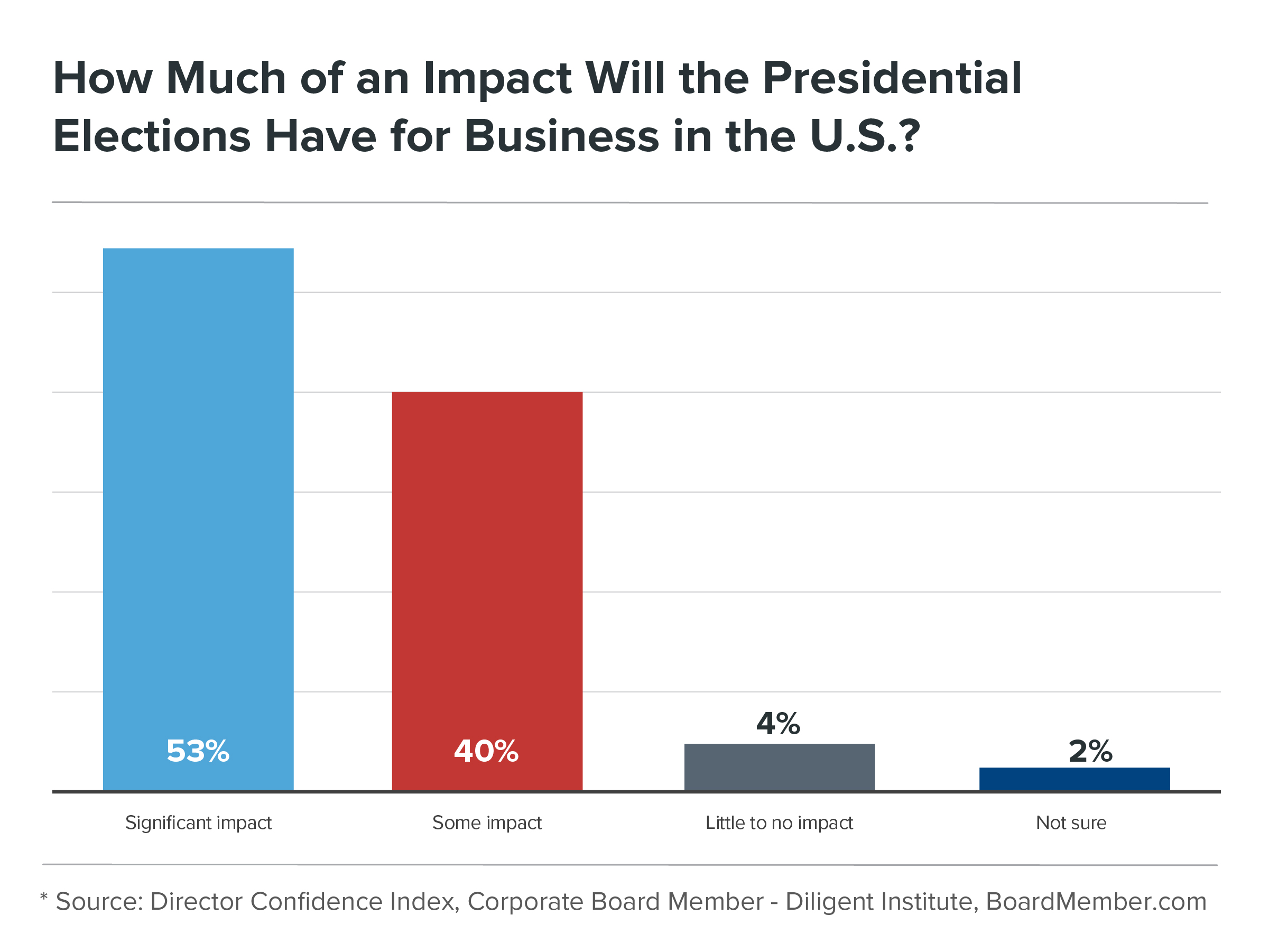 But the situation is evolving. Overall, 68 percent say they expect Republicans to take control of the House and 54 percent expect Democrats to retain control of the Senate, but those predictions are becoming more mixed as time passes. In our last week of polling, for instance, these numbers changed to 61 percent and 47 percent, respectively; a large margin from the 80 percent and 62 percent we had observed in the first two weeks of polling in late August/early September.

The proportion of those who chose not to venture a guess is also on the rise, increasing five percentage points, from 8 percent to 13 percent over that same period.

And while the Presidential election is still two years out, the trend is the same. The split when we began fielding the survey was 63 percent of directors forecasting Republicans to take control of the White House vs. 29 percent predicting it would go to the Democratic Party. Six weeks later, the gap had narrowed to 50 percent vs. 44 percent—the balance being uncertain enough to not wager an outcome. 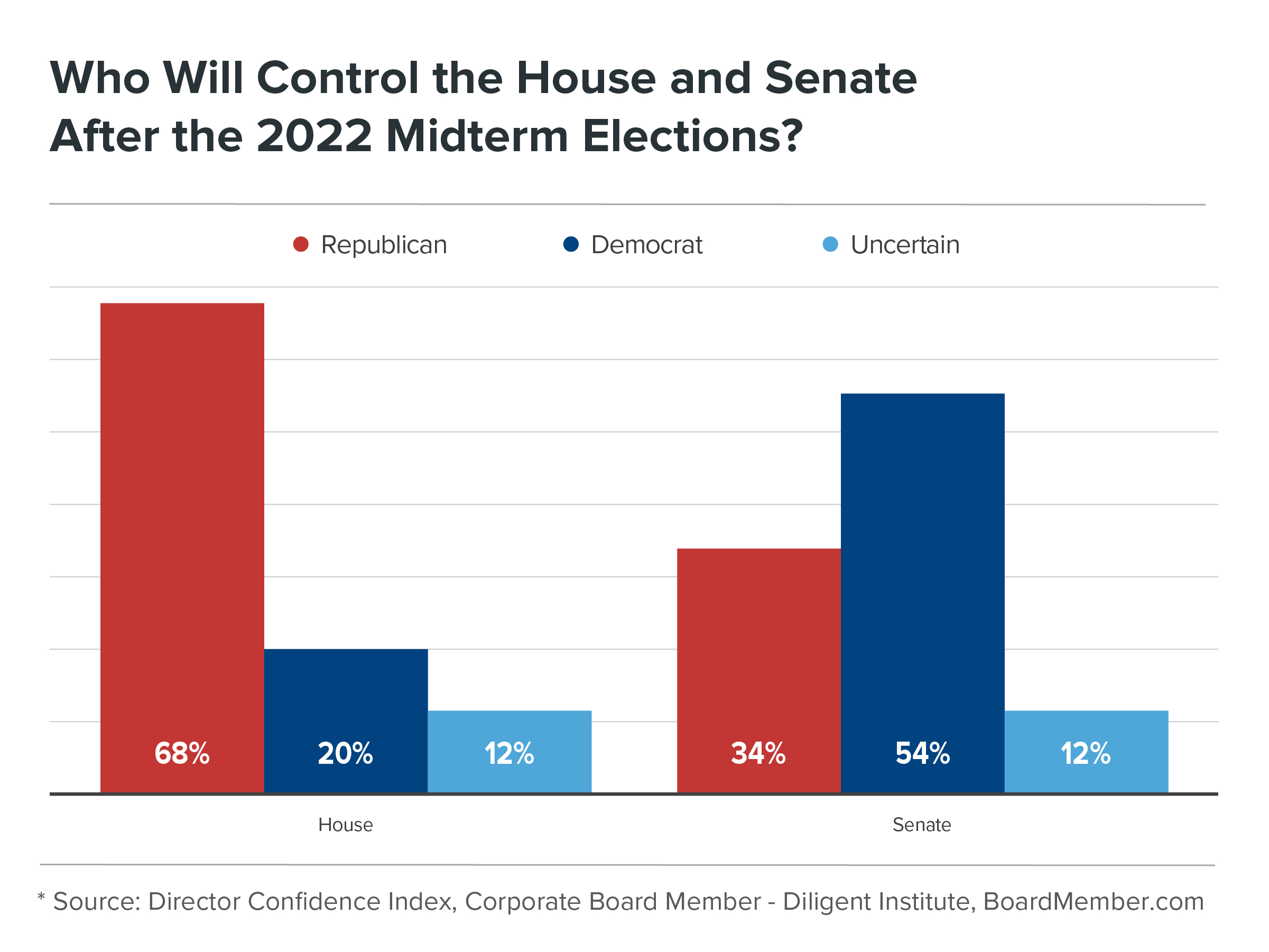 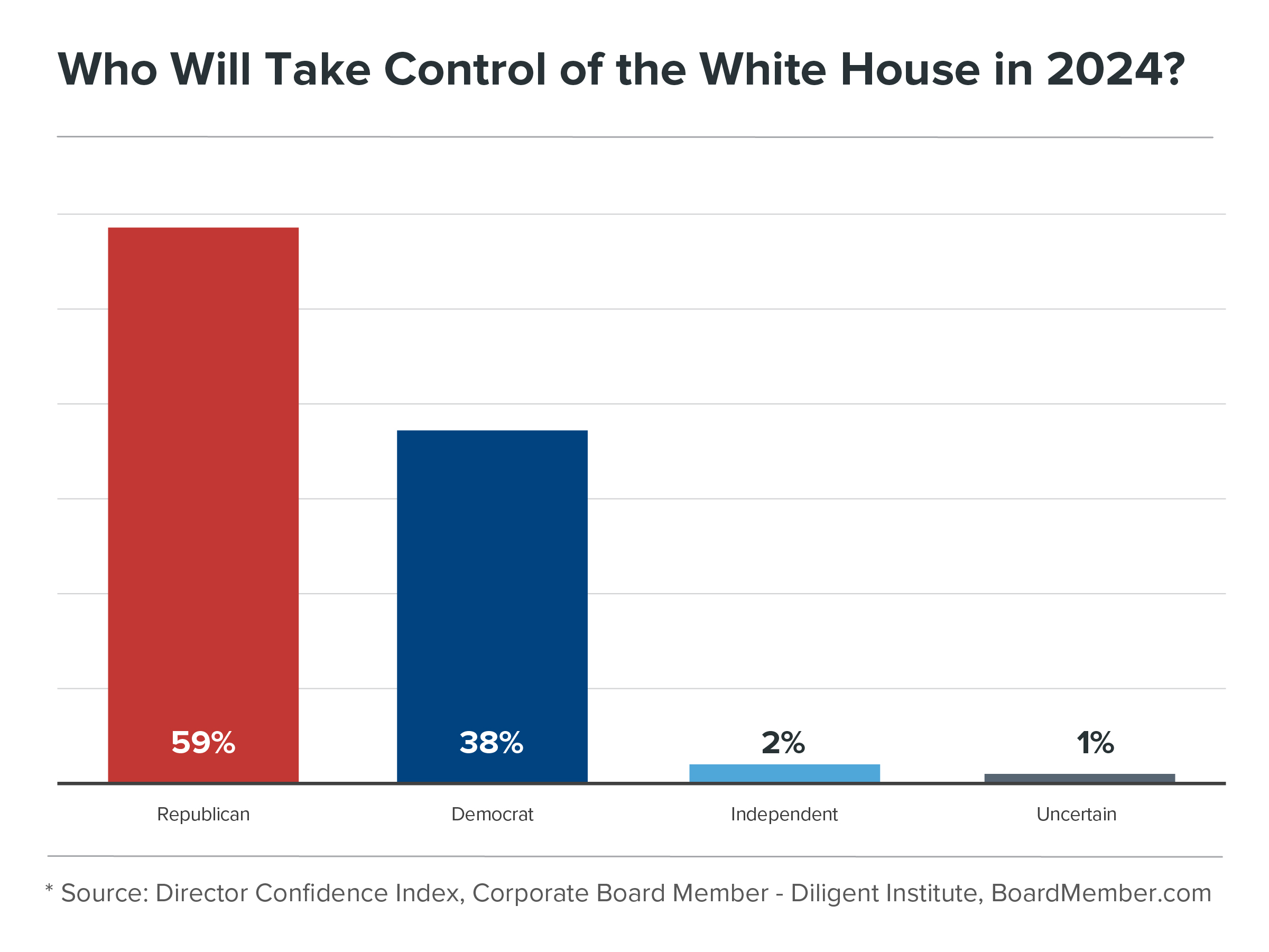 Directors also seem torn on the issue of political contributions: 47 percent say they are a justifiable business decision, vs. 53 percent who disagree. That divide was interestingly the same when we last asked the same question of directors, 10 years ago—except the numbers were reversed, with 53 percent saying political contributions were a justifiable business decision, and 47 percent who disagreed.

One thing they seem to agree on, a change—on either side of the aisle—would be welcome.

“It will not be good economically & socially if nation has to put up with re-runs of Trump or even Biden for president,” said one director participating in the survey. “Need new young politicians with refreshed focus on economy and democracy. Too much unhealthy political noise will stunt national recovery and growth across all industries.”

“We are overdue for some rational leadership in DC,” said another—both echoing most of the other board members surveyed. 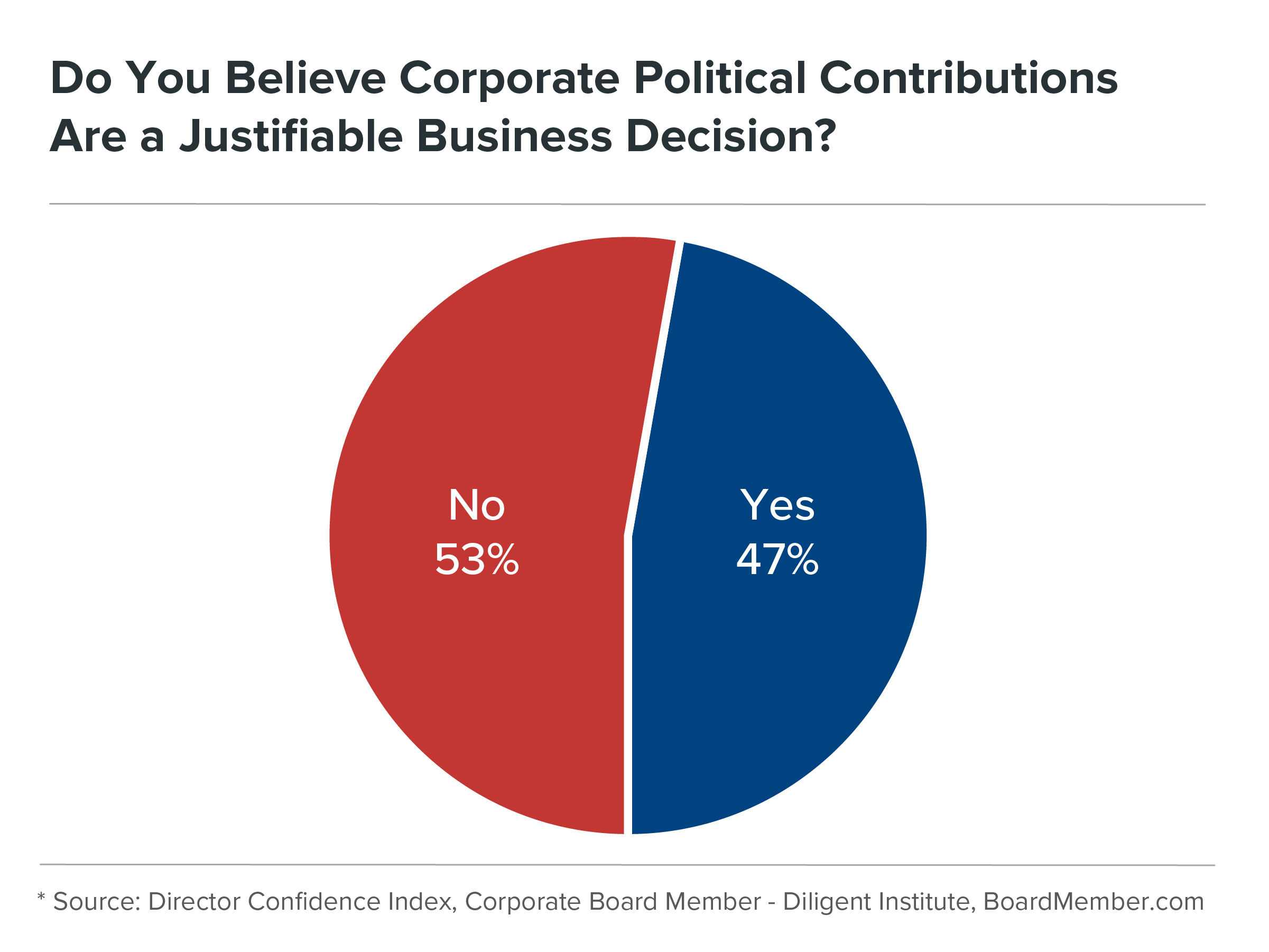