The proportion of public company board members forecasting improvements in business conditions in the year ahead remained steady in September (38 percent), but the extent of the improvements they expect to see has been narrowing for five consecutive months, in the midst of a growing list of unresolved challenges. Directors’ forecast for business conditions 12 months from now fell to 6.5 out of 10 in September, down 3.5 percent since August. That’s more than 12 percent off April highs (7.5) and the lowest our leading indicator has been since we started to track director sentiment a year ago. This is in line with findings out of Diligent Institute’s Corporate Sentiment Tracker, an AI-powered tool which tracks issues being discussed by corporate leaders in the news and whether they are speaking about those issues positively or negatively. At the time this report is being written, the Corporate Sentiment Tracker is 58% positive, down from 66% last month.

Those are the key findings from our September Director Confidence Index, a flash poll of 152 public company board members conducted in partnership between Corporate Board Member and Diligent Institute. Directors say their dwindling optimism is caused by increasing regulations, inflationary pressures, rising interest rates, supply chain disruptions and a political climate that, they say, is hindering companies’ ability to recover fully from the crisis.

“We may be riding a wave of pent-up demand, but the looming shortages (people, materials, etc.) and fractured government do not bode well for the future,” says Jane Sadowsky, director at precious metals producer Yamana Gold, echoing general sentiment among many survey respondents. “As we enter winter in the U.S., another wave of Covid could devastate morale and business conditions.” She rates current conditions a 6 out of 10 but forecasts them to decline to a 4 by October 2022. 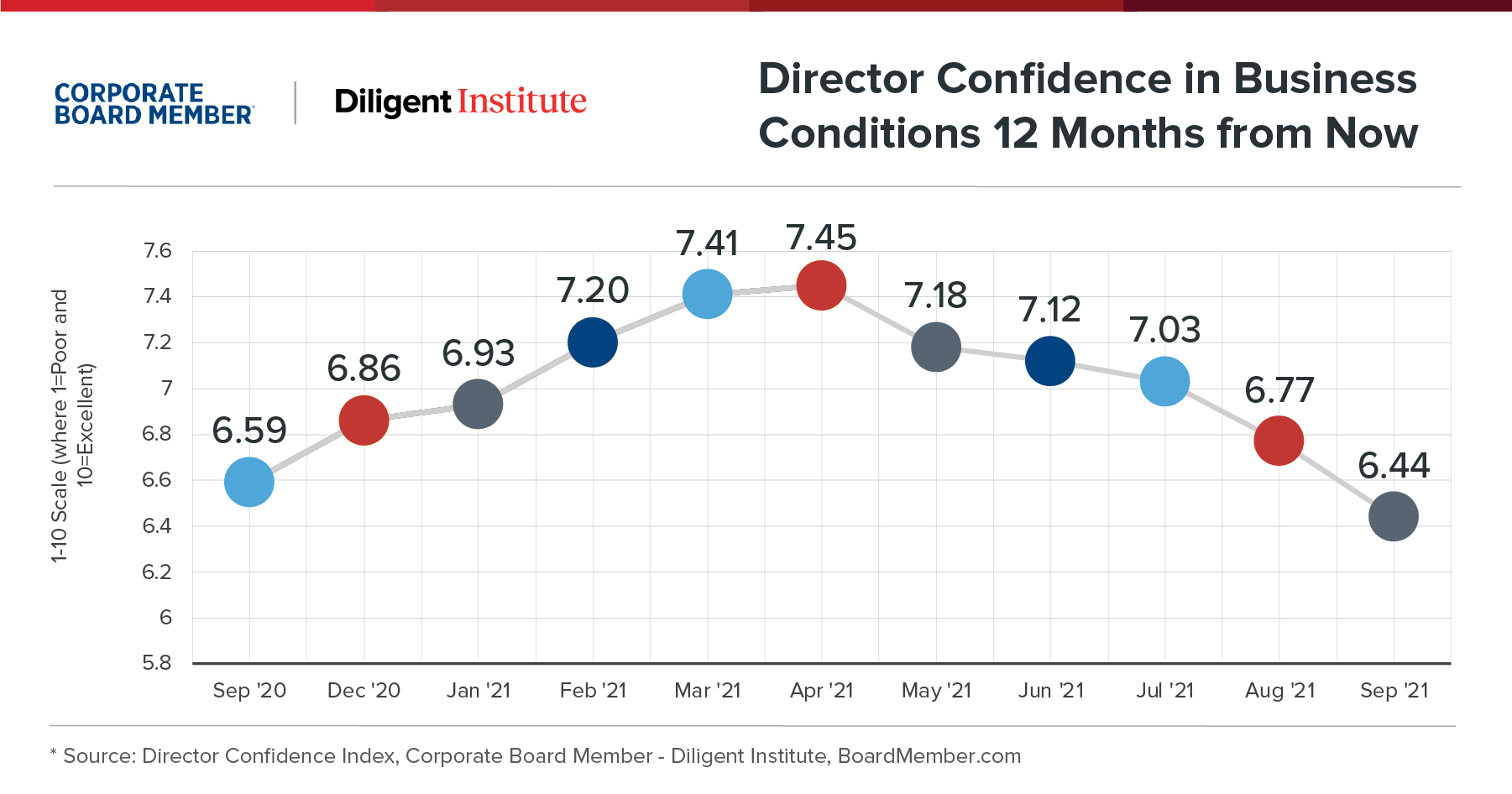 Directors’ assessment of current business conditions also declined in September, to 6.44 out of 10, on our 10-point scale. That is nearly 6 percent lower than in August and 13 percent off July highs, when board members and many members of the C-Suite forecasted a return to the office and the tampering of pandemic conditions.

“Demand is strong, but we need to sort out the supply chain issues sooner rather than later,” says the chairman of an American Fortune 500 company, who rates conditions a 7/10 and forecasts them to improve to an 8 by this in 2022.

“I think business is doing well in many industries but could be held back by five points—Covid, supply chain disruptions, interest rates, Congress/Senate success on new bills, raising the debt limit and ability to hire employees,” says Merrie Frankel, director at Agree Realty Corporation, a retail net lease REIT where she chairs the nominating/governance committee.

For Carlos Palomares, chair of a diversified consumer finance company Regional Management Corporation, says he forecasts a slight dip in the business environment—from a 6 out of 10 to a 5—due to “risk that inflation may be worse and of longer duration that most expect,” he says, adding that “political disfunction” is also impacting his outlook.

“Business conditions are actually very good. Consumers are spending money, there are backlogs all over the place which will keep manufacturing going for a long time, interest rates are low, etc.,” says the director of a publicly traded company in the financials sector. Yet, he rates conditions a 5/10, which he says is because of “the risk is that the government (Democrats) will screw it up with a lot of unnecessary stimulus and new taxes that will put the brakes on.”

Most directors—even those with “excellent” or “very good” forecasts—are keeping a close eye on how things unfold across many areas. For Henry Nasella, lead director at apparel company PVH Corporation, who rates current business conditions a 9 out of 10 and expect them to remain as strong throughout the year, the “current momentum is very strong globally and expect these trends to continue. The biggest risks for us are geopolitical and not under our control,” he says.

Some, still, remain very optimistic in the future: “Logistics issue of supply will be resolved in six months. The financial markets will continue to be positive. And the infrastructure will be passed although reduced to under 3Trillion,” forecasts Adam Crescenzi, director at Clough Global Allocation Fund. He rates current conditions a 7 out of 10 and expect to improve to a 9—or “excellent” on our scale—by this time next year. 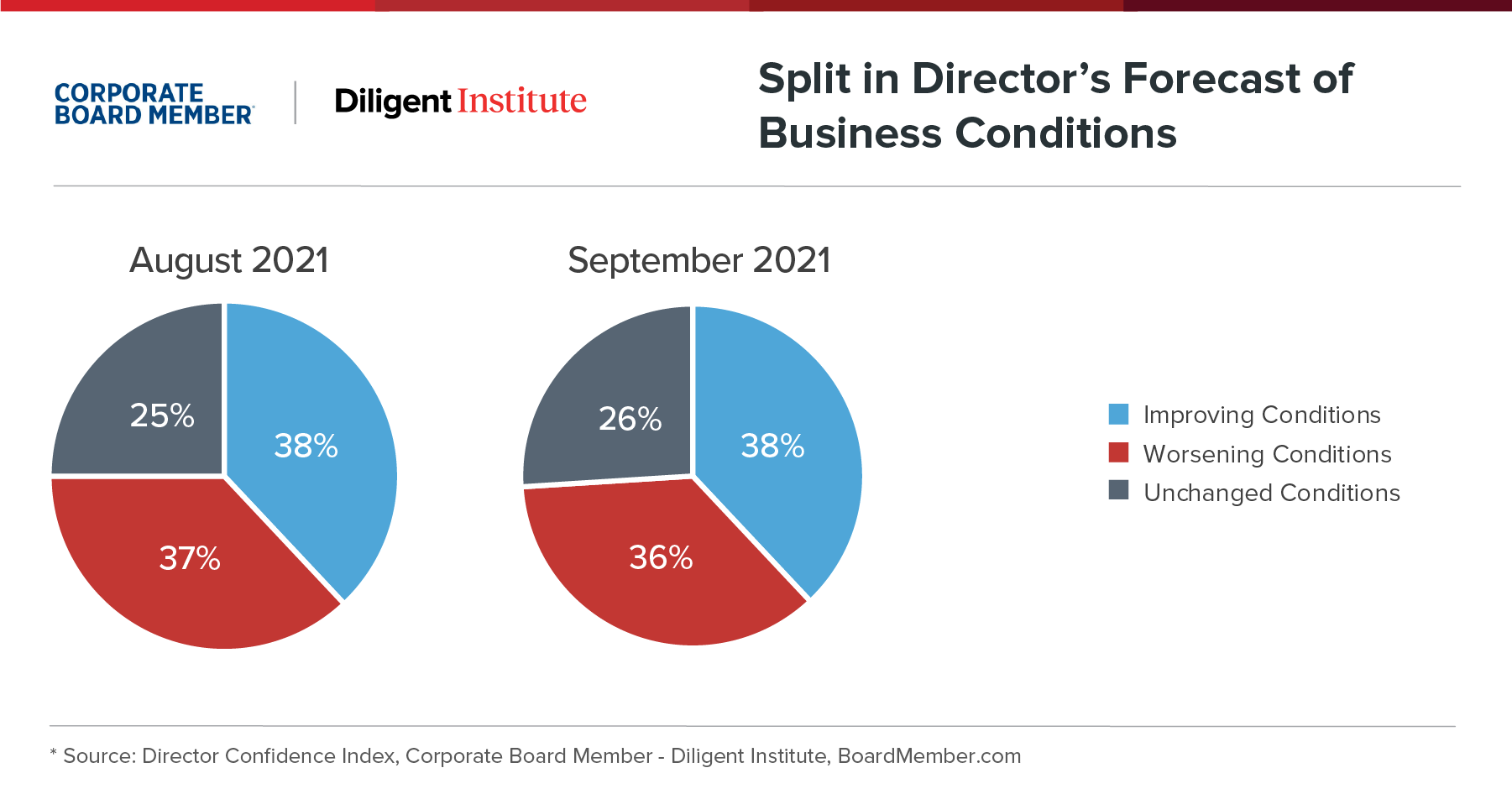 Still, that is slightly more optimistic than CEOs’ forecasts, which continued to decline in early October. According to our sister publication Chief Executive’s latest polling, 33 percent of CEOs expect conditions to improve in 2022, compared to 35 percent who project they will worsen—31 percent now say they will remain unchanged.

The proportion of directors forecasting increases in revenues and profits declined in September, by 9 and 7 percent to 85 and 77 percent (vs. 92 and 84 percent in August). Those are the lowest levels since January 2021—pre-vaccine efforts in the U.S.

Nevertheless, an increasing number of directors say their companies are planning to increase capital expenditures over the next 12 months, 56 percent vs. 52 percent in August. While a 7 percent increase, this proportion remains one of the lowest on record this year. 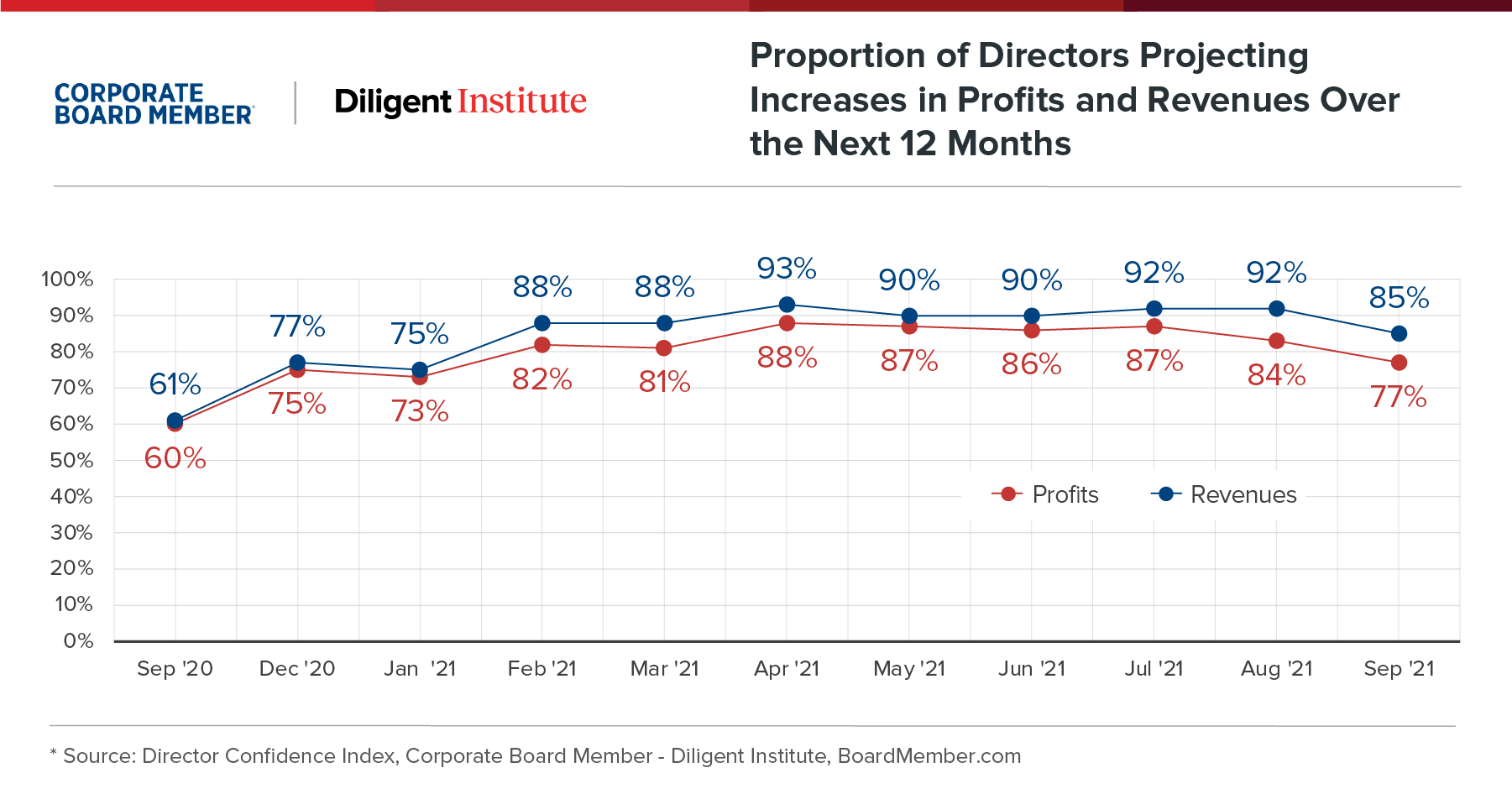 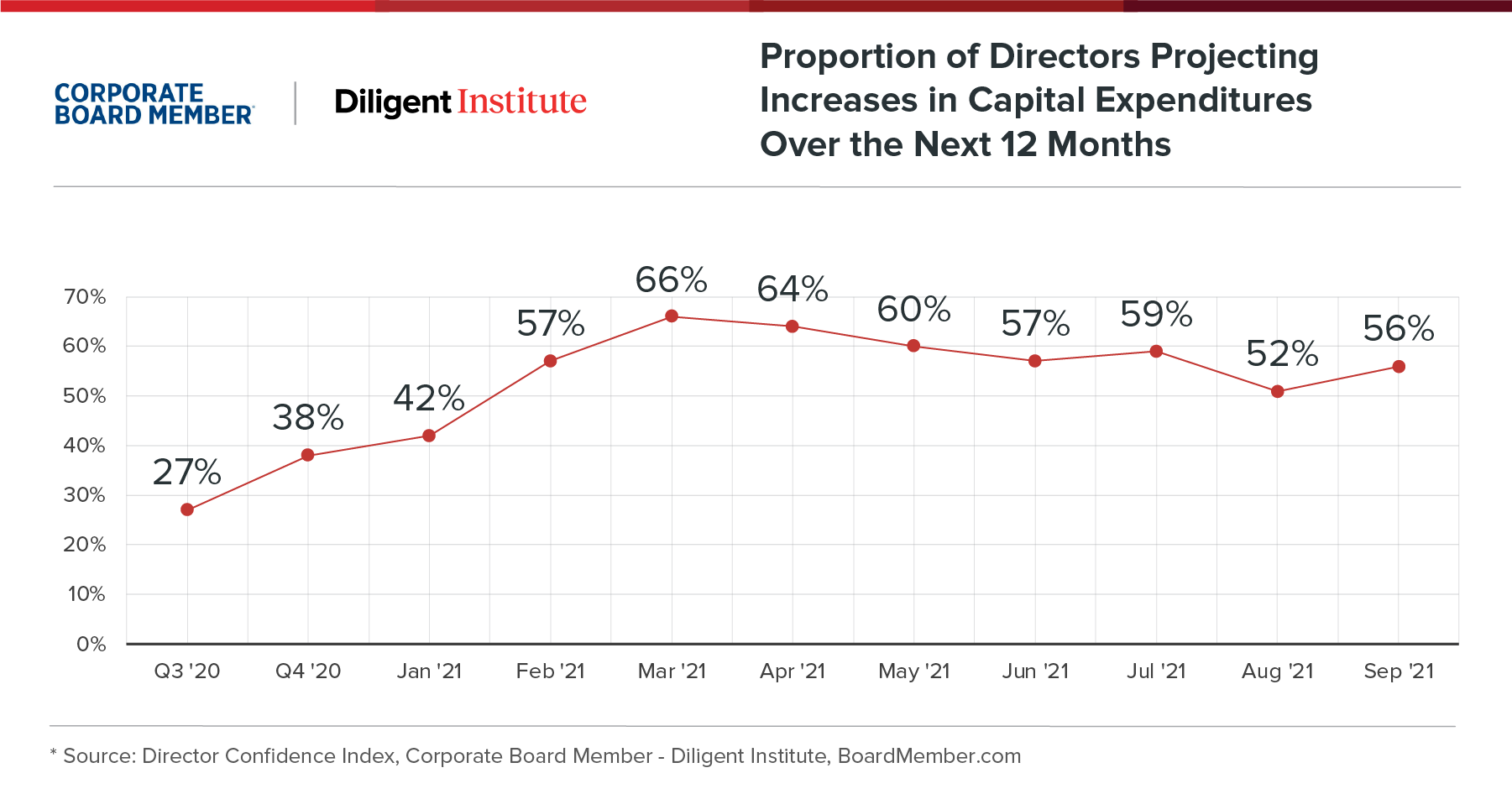 Corporate Board Member’s 19th annual What Directors Think survey, conducted in partnership with Diligent Institute, has closed, and our research team is working hard at getting the results ready for the Q1 issue of the magazine. Overall, approximately 400 board members have shared their perspective. Of note:

Stay connected for the full coverage of the results of the survey in the first-quarter issue of Corporate Board Member magazine and a special digital report coming out in January. If you’re a public company board member and do not receive the magazine, please write to Research@ChiefExecutive.net to request your complimentary copy.