While the U.S. is still dealing with the effects of the COVID-19 pandemic, the 2020 economic recession proved to be sharp, and the rebound, at least in the short-term, robust. The rapidly changing business environment led many companies to pull back and announce executive compensation cuts. Given the rapidly evolving economic context, however, few companies followed through on their previously announced plans. In this report, we will cover how executive compensation changed in the wake of the pandemic, how shareholders reacted, and what to expect moving forward.

In our previous report “Will the Dust Settle? Russell 3000 Pandemic Report Vol. 2,” we identified 762 Russell 3000 companies, roughly a quarter of the index, that announced changes to executive compensation as a result of the pandemic, either a base salary cut, replacement of base salary with stocks, further deferment of variable compensation and/or other measurements. Of the 762 companies, 85% (647) adjusted executive base salary and/or board of director fees, and 15% (115) announced changes to incentive plans. One hundred and thirty-two of 762 (17%) companies took measures regarding both base salary and incentive plans.

Did companies go through with the announced pay cuts?

A year after 647 Russell 3000 companies announced CEO salary cuts, we found that 79% of them went through with a planned reduction. However, only 15% of them reached the reduction amount that they promised. 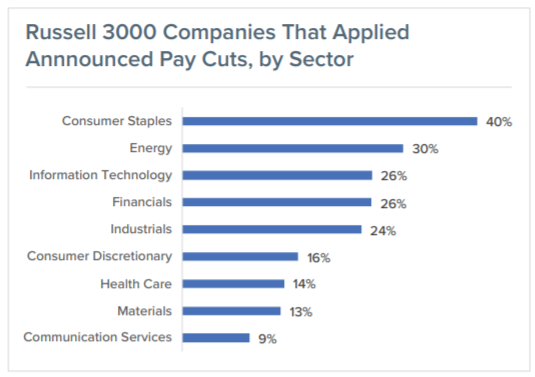 Despite COVID-19, median TGC for Russell 3000 CEOs rose 3.6% in 2020, from USD 4.9 million to USD 5.1 million. On the other hand, median TRC showed a slight decrease of 0.4%. This could be attributed to companies postponing historical LTI plans that should have been vested in 2020. Nevertheless, looking at the five-year trend in CEO compensation, it is safe to assume that CEO compensation will continue to rise, both on a granted and realized basis.

S&P 500 CEOs also saw their compensation package grow in 2020, with a 1.5% increase in TGC and a 0.2% increase in TRC. Similar to the Russell 3000, CEO compensation for S&P 500 companies has been trending upward over the past five years, and will likely continue to grow in the future.

In the Russell 3000, the consumer staples sector, which includes food and staples retailing; food, beverage and tobacco; and household and personal products, had the biggest increase in median CEO-granted compensation in 2020, at 3.88%. This was likely driven by the sector’s strong performance last year — widespread “shelter-athome” measures resulted in increased demand. Median granted pay for consumer discretionary CEOs in the Russell 3000 rose by 3.82%, the second-biggest increase in our sample. By contrast, median granted pay for CEOs of energy companies saw a 2.46% drop. Median CEO pay for S&P 500 companies follows the same pattern as Russell 3000 companies. Consumer discretionary and consumer staples company CEOs saw the largest gains, while energy company CEOs saw the greatest drop itn their median compensation. However, the increase in median pay for the S&P 500 is larger than that of the Russell 3000. Median CEO compensation for the consumer discretionary sector and consumer staples sector rose by 15% and 10%, respectively, compared with 2019. 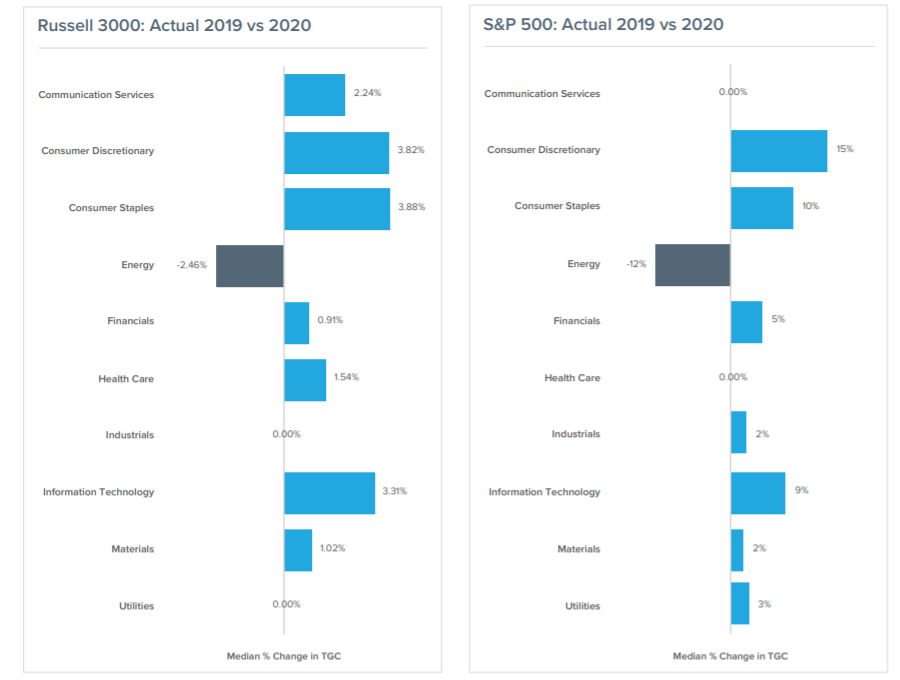 Median CEO pay for S&P 500 companies follows the same pattern as Russell 3000 companies. Consumer discretionary and consumer staples company CEOs saw the largest gains, while energy company CEOs saw the greatest drop in their median compensation. However, the increase in median pay for the S&P 500 is larger than that of the Russell 3000. Median CEO compensation for the consumer discretionary sector and consumer staples sector rose by 15% and 10%, respectively, compared with 2019. 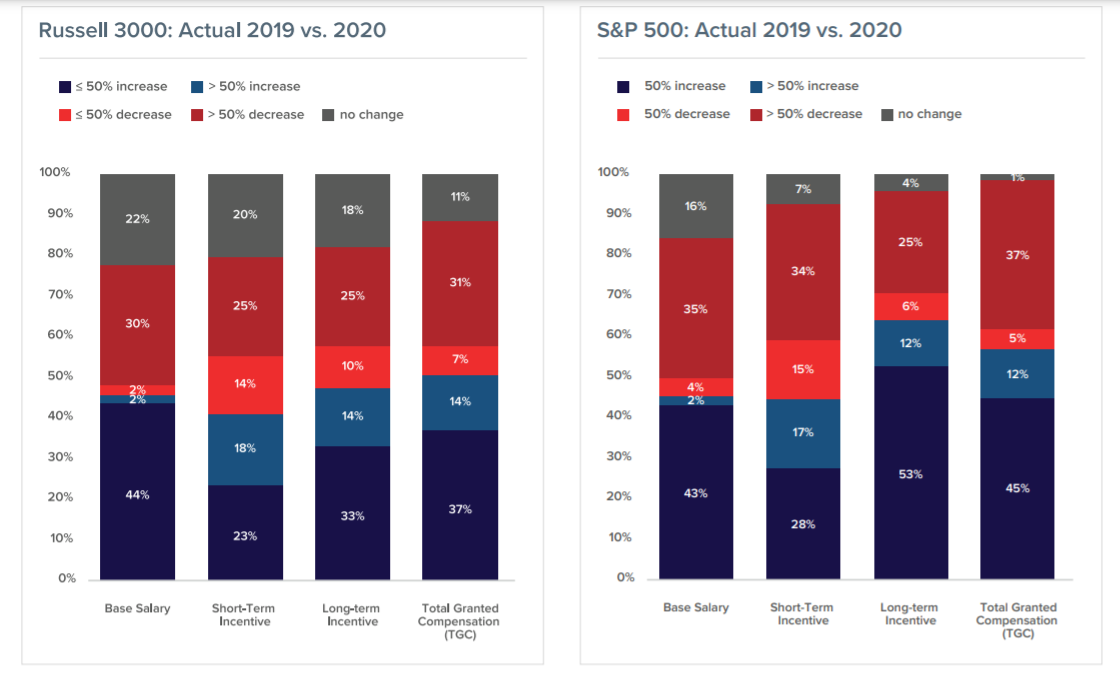 There are similar trends within the S&P 500. Notably, however, 57% of companies increased CEO-granted compensation and 42% reduced it, meaning that only 1% of S&P 500 companies made no changes to CEOgranted pay. Similar to the Russell 3000, STIs were the most commonly reduced component of CEO remuneration packages, with 49% of S&P 500 companies cutting CEO STIs. Significantly, three-quarters of these reductions were over 50%. CEO base salary, STIs and LTIs were increased for 45%, 45% and 65% of S&P 500 companies, respectively. Compared to the Russell 3000, fewer companies saw each compensation component stay the same. Looking at the median numbers for each pay component in 2020, base salary decreased for both the Russell 3000 and S&P 500 (-1.1% and -4.2%, respectively). STI increased for the Russell 3000 (3.6%) and decreased for the S&P 500 (-1.9%); yet LTI increased for both indices, 2.7% for the Russell 3000 and 6.8% for the S&P 500. The large increase in CEO LTIs in 2020 was due mainly to structural changes made by companies with regard to compensation. Many companies granted supplemental LTI awards, which are often time based, in lieu of STIs, while others increased the weight of time-based LTI components. Some companies adjusted performance periods to include only certain parts of the year, while others opted to grant discretionary awards, resulting in payouts that may not have been earned otherwise.

The two charts below show the shift in CEO pay mix over the last five years for Russell 3000 and S&P 500 companies. LTI is the only component that has been growing, while cash-based incentives seem to be on a downward trend. Although base salaries and STIs generally make up a smaller part of the executive compensation package, companies are steering away from these cash-based incentives in favor of LTIs, particularly performance-based plans. 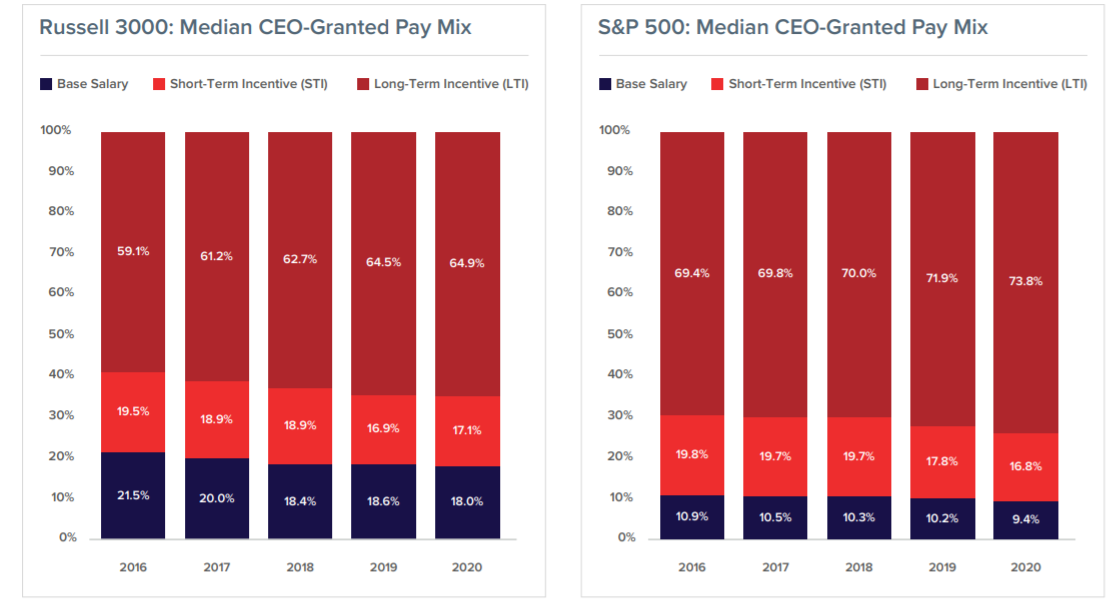 The two graphs below show the median CEO TGC compared with the 1Y TSR of companies in the Russell 3000 and S&P 500. While the market, and thus TSR, is volatile, CEO pay levels continue to rise year over year. Nevertheless, the increase in CEO pay seems to be relatively aligned with TSR performance: Strong TSR growth coincides with high increases in TGC, while negative growth leads to only modest increases in TGC. This holds true for companies in both indices. However, we have not yet seen any decrease in CEO- granted pay, regardless of TSR performance. Given this trend, we expect CEO pay to continue increasing in the future. 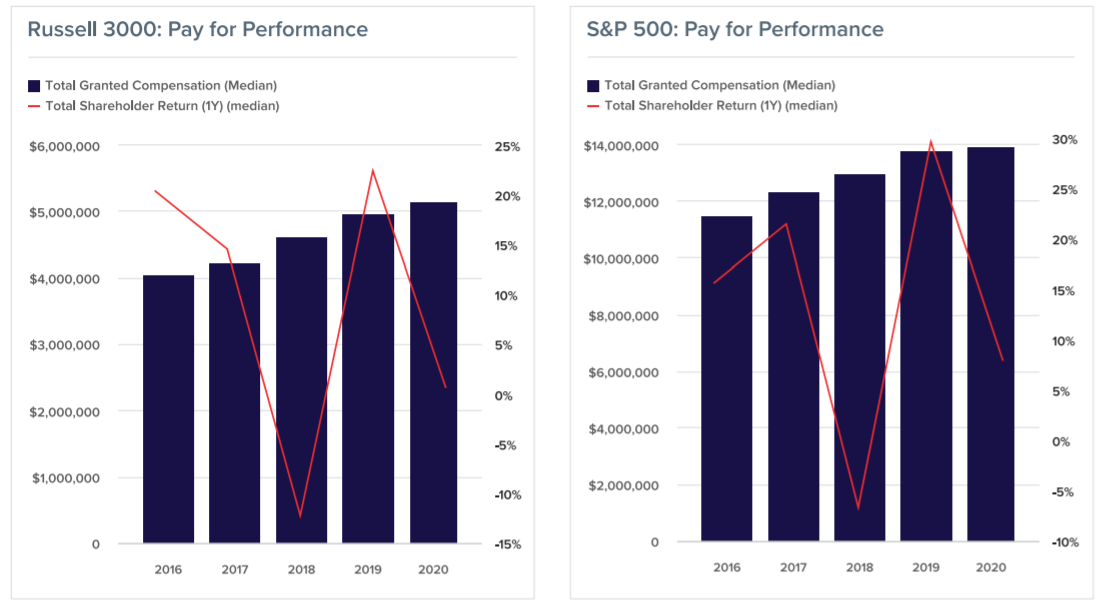 As noted, a minority of companies announced plans to cut executive compensation in the wake of the pandemic. However, given the shorter-than-expected recession, executive pay cuts (usually in the form of STI or base salary reductions) look to be short-lived. As such, executive pay levels are expected to increase year over year in 2021. This is particularly pertinent to the Russell 3000 index, where median base salaries comprise 18% of total compensation (compared to only 9.4% in the S&P 500). Still, because most executive remuneration packages take the form of equity incentives, often based on financial performance, compensation levels between companies that outperformed versus those who underperformed are expected to increase. The weight of LTIs in compensation packages will likely increase, and the use of performance-based awards is expected to return to the pre-pandemic level.

For Russell 3000 companies, median pay ratios were highest within the consumer discretionary (192:1) and consumer staples (173:1) sectors. As previously noted, the consumer discretionary sector was particularly robust throughout the pandemic, potentially explaining the persistently high median pay ratio in 2020. The lowestaverage pay ratios were within the financials (50:1), energy (53:1) and utilities sectors (63:1).

With the global economic downturn in the wake of the COVID-19 pandemic, investors and companies faced a rapidly evolving series of events and influences in the 2020 proxy season. Social movements, like the drive for racial equity, as well as increasing environmental concerns, put corporations and stakeholders in the spotlight.
Boards faced pressures on a range of issues, including executive and director diversity, environmental governance, gender pay equality, and more. For instance, environment, social and governance (ESG) initiatives attracted a large amount of attention. It has become increasingly common for compensation committees to include ESG incentives in executive remuneration policies. However, even outside of annual general meetings, ESG performance is clearly becoming a more central focus among stakeholders, customers and companies alike. Given these trends, it is somewhat surprising that say-on-pay (SOP) proposals have continued to see elevated levels of support. Our data shows that average support for SOP proposals among Russell 3000 companies was relatively high, at 89.8%, for the 2021 proxy season. This was slightly higher than the average support in 2020 (89.1%) and in 2019 (89.1%). The results show a high and stable level of support across the index. This diverges moderately from the support-level trends in the S&P 500, which were already marginally lower and saw a 0.7% drop from 2019 to 2020 and another 0.5% drop in 2021. It appears that shareholders of S&P 500 companies have been more proactive in taking actions regarding executive compensation compared to their Russell 3000 counterparts. 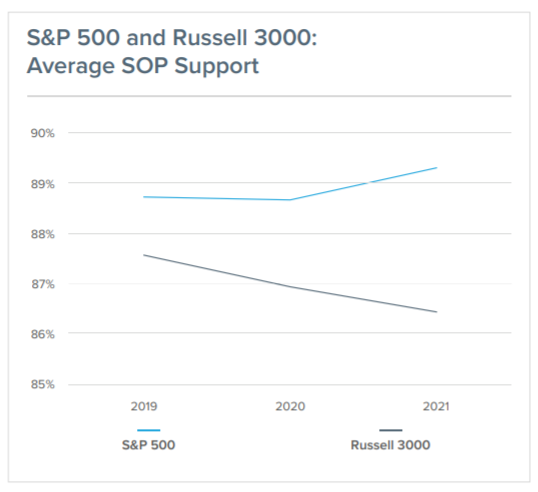 Within Russell 3000 companies, only 3.2% of SOP proposals received under 50% support in 2021. In 2020, 2.8% failed to receive at least 50% support. The percentage of SOP proposals that received over 70% support, the threshold under which Institutional Shareholder Services (ISS) conducts a review of board responsiveness, remained high, at 91.8%.
When these results are broken down across sectors, however, there are notable differences. Some sectors have seen significant increases in the percent of SOP proposals, with less than 70% support. The communication services sector, for instance, had its percent of SOP proposals without 70% support jump from 14% in 2020 to 19% in 2021. Similarly, the consumer discretionary and consumer staples sectors also saw year-over-year increases in dissension in 2021.

Other sectors saw their dissenting levels fall. The health care sector, for example, had one of the highest rates of dissension in 2019 and 2020, with percentages of SOP support below the 70% threshold, at 17% and 15%, respectively. In 2021, that number fell to 9.6%. This drop could be attributed to the supportive sentiment for the industry during the COVID-19 pandemic. As noted above, median CEO pay within the sector increased 3% from 2019 to 2020. The information technology sector also saw a decline in its dissension levels in 2021, with SOP support below 70% falling from 13% in 2020 to 9% in 2021. This increase in SOP support could be attributed to the tech industry’s robust performance and rebound throughout the pandemic. 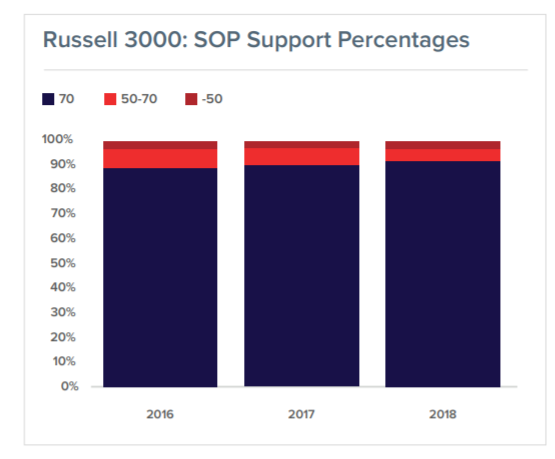 A recent report published in the Harvard Law Forum on Corporate Governance notes that shareholder proposals on environmental matters have increased dramatically in 2021 and 2020. Specifically, the report finds that climate-related proposals received particularly high support in 2021 — with average support at 41%.
This could be a product of larger institutional investors engaging more actively in their companies, specifically on environmental and climate issues. As ESG issues gain more traction, it is plausible that ESG-related shareholder proposals will gain more support. In either case, however, it is likely that companies will take it upon themselves to incorporate ESG initiatives into their overall strategies at the behest of institutional investors, employees, and public pressure. 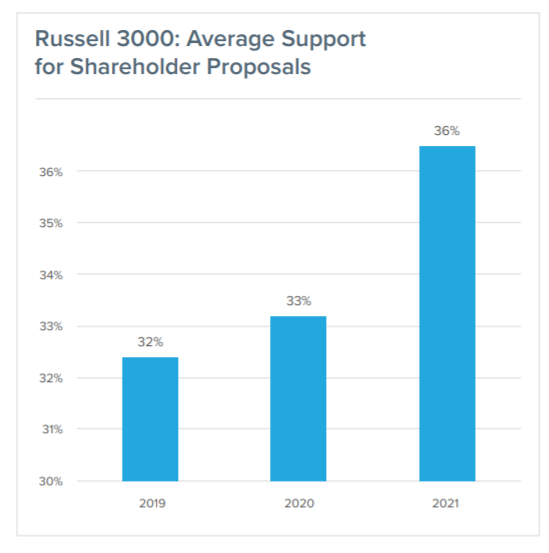