When it comes to the future of the global economy, there’s only one word for how America’s corporate directors are feeling: bullish.

Corporate Board Member’s latest poll of U.S. public company directors shows rising optimism in business conditions 12 months from now. Directors say the increase in vaccinations and consumer spending, alongside new fiscal policy, are the main drivers of confidence that the economy is recovering at a healthy pace.

Data from our February polling of 119 U.S. public company board members, conducted February 21-24 in partnership with the Diligent Institute, shows director confidence in the coming months hit another new high since we began tracking optimism in September 2020. At 7.2 out of 10 on our 10-point scale, the forward-looking indicator is up 4 percent from January—in line with CEOs’ forecast of 7.1/10, as reported by our sister publication, Chief Executive, earlier this month.

When asked about their view of the current economy, directors gave it a 6.2 out of 10, up 7 percent since January—once again in line with CEOs. 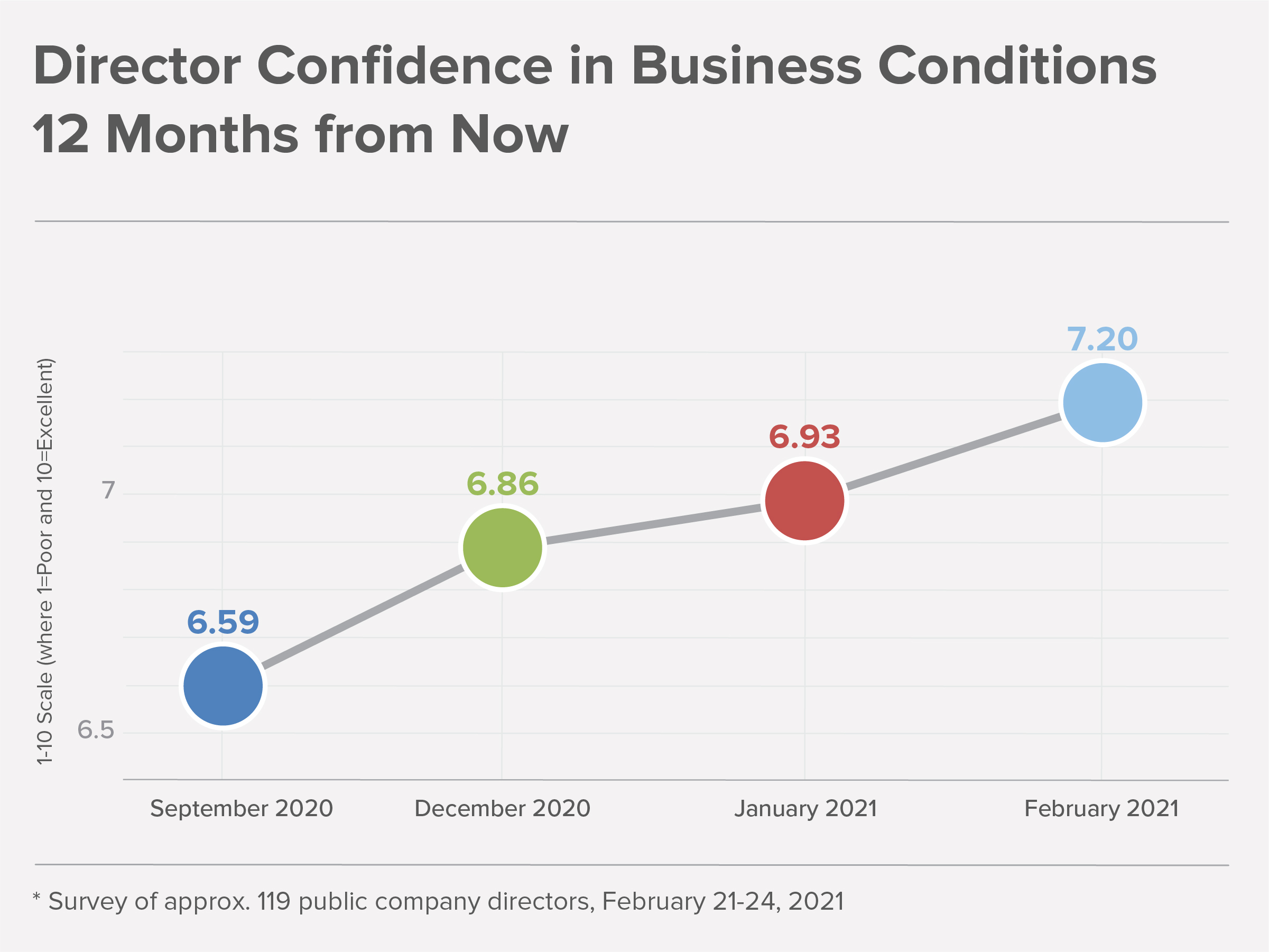 W. Howard Morris, director at Industrials company Owens Corning and president & chief investment officer at The Prairie & Tireman Group, rated his outlook for future conditions an 8 out of 10 on the basis that “low interest rates and a rebounding economy” are likely to drive up business conditions in the next year.

Directors have been showing increasing optimism in recent months, based largely on the idea that a Covid-19 recovery and the continuation of the vaccine rollout will allow consumers to be out and about by this time next year.

Nevertheless, many of those we polled remain concerned about the potential for another unforeseen event changing the trajectory of the recovery. The director of a mid-size consumer staples company says there is a certain degree of “fear of the next shoe dropping. This environment has brought extreme paranoia.”

Some directors are also voicing concerns that the new administration’s stimulus plan could cause inflationary headwinds. “Expect inflation and social pressures combining to significantly increase the cost of products we buy and sell,” said a financial services director who rated both current and future conditions a 6 out of 10, or “good”, according to our scale.

Similarly, a director from the REIT sector said he is concerned about “potential inflation due to massive Covid Relief Bill, which isn’t a Covid relief bill but a bill to support progressive spending,” he says, rating his forecast of the economy 12 months from now lower than how he views it today, at 5 out of 10 vs. 7 out of 10.

Overall, though, most directors expect business conditions to improve on the back of a reopening of businesses, renewed political stability, governmental aid for small businesses, decreasing unemployment and increasing investments in various sectors.

Nearly 90 percent of directors surveyed now project an increase in revenues over the coming months—17 percent more directors than last month—mostly due to a substantial increase in consumption. “Right now, there is a lot of pent-up demand,” said the director of an emerging industrials company. “Not a shortage of money, but just the ability to spend it.” 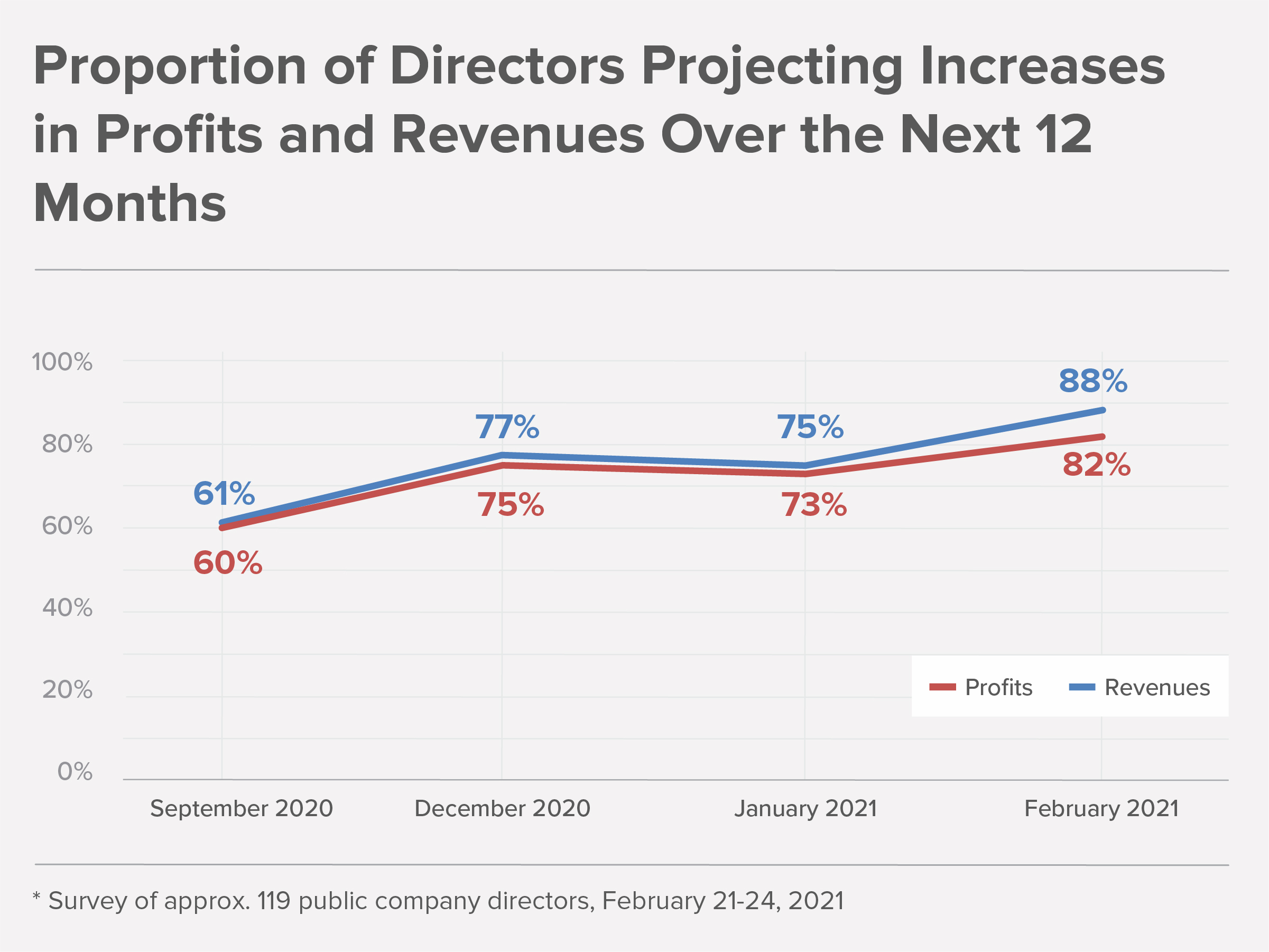 Similarly, 82 percent of directors are forecasting an increase in profits within the next 12 months—12 percent higher than last month. February data shows a greater proportion of directors than CEOs bullish on those metrics, with 78 percent of CEOs predicting revenue growth and 72 percent predicting increasing profitability over that same period. 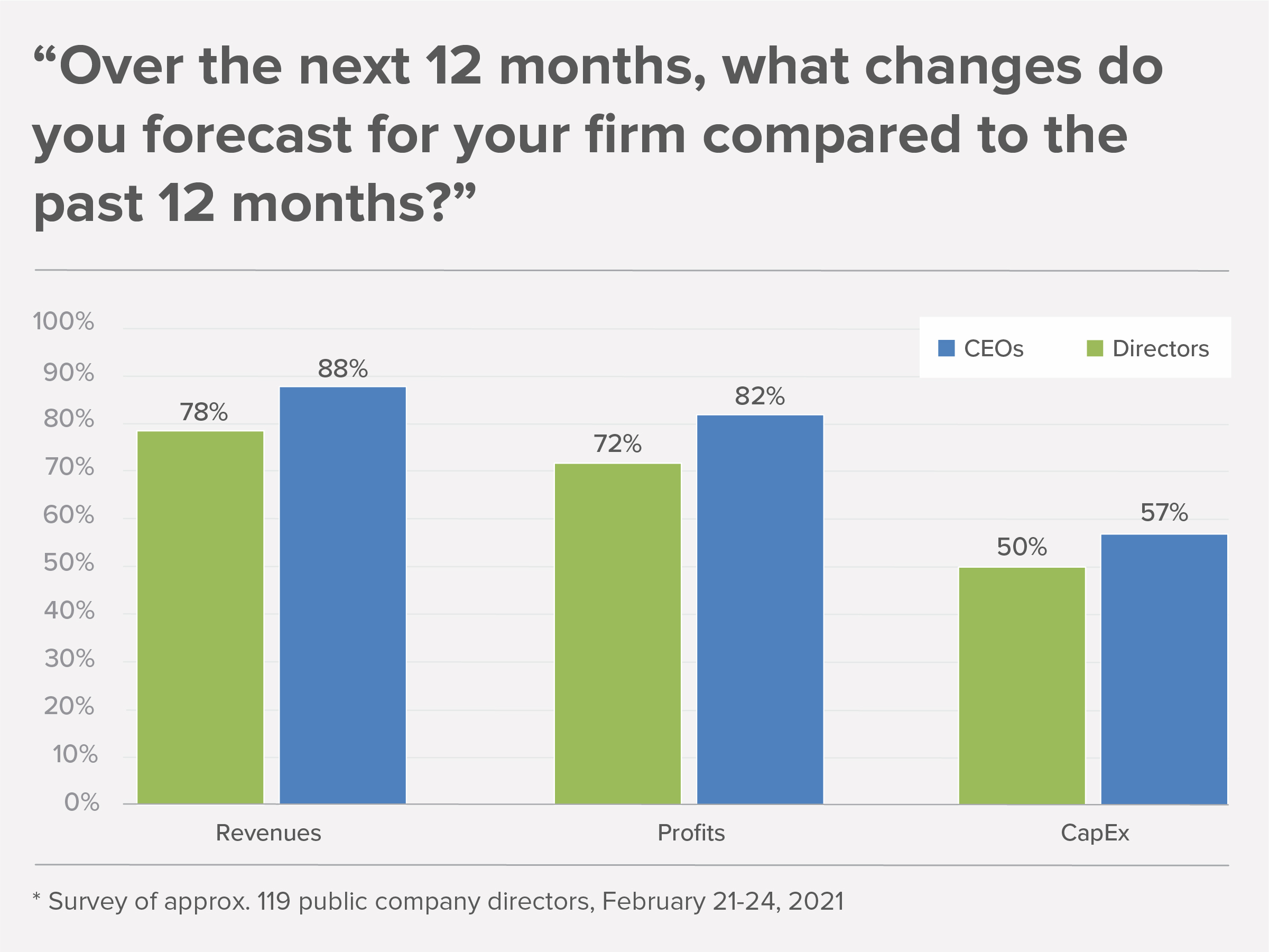 The data shows a similarly optimistic view across most sectors. The largest decline recorded is in the energy sector, where directors say the new administration’s regulations are affecting oil and gas. The sector recorded a decline of 6 percent MoM.

One director at a large energy company says his rating of future conditions of 3 out of 10 is due to “risks involved with inflation and Powell having pegged the lower interest rate for longer, leaving little room to maneuver strategically.”

Elsewhere, directors at companies in consumer staples and materials also reported a decline, down 6 and 9 percent, respectively, on fears of increased taxes and regulations.

“Increases in taxes, regulations and anti-business initiatives coupled with continuing flu lockdowns yields recession, declining stock prices and weak consumer sentiment,” said a director in the consumer staples sector who rates future business conditions as “poor” or 2 out of 10, down from an 8 today.

On the upside, directors in the healthcare and industrials sectors showed a 9 and 11 percent increase, respectively, in their confidence this month. 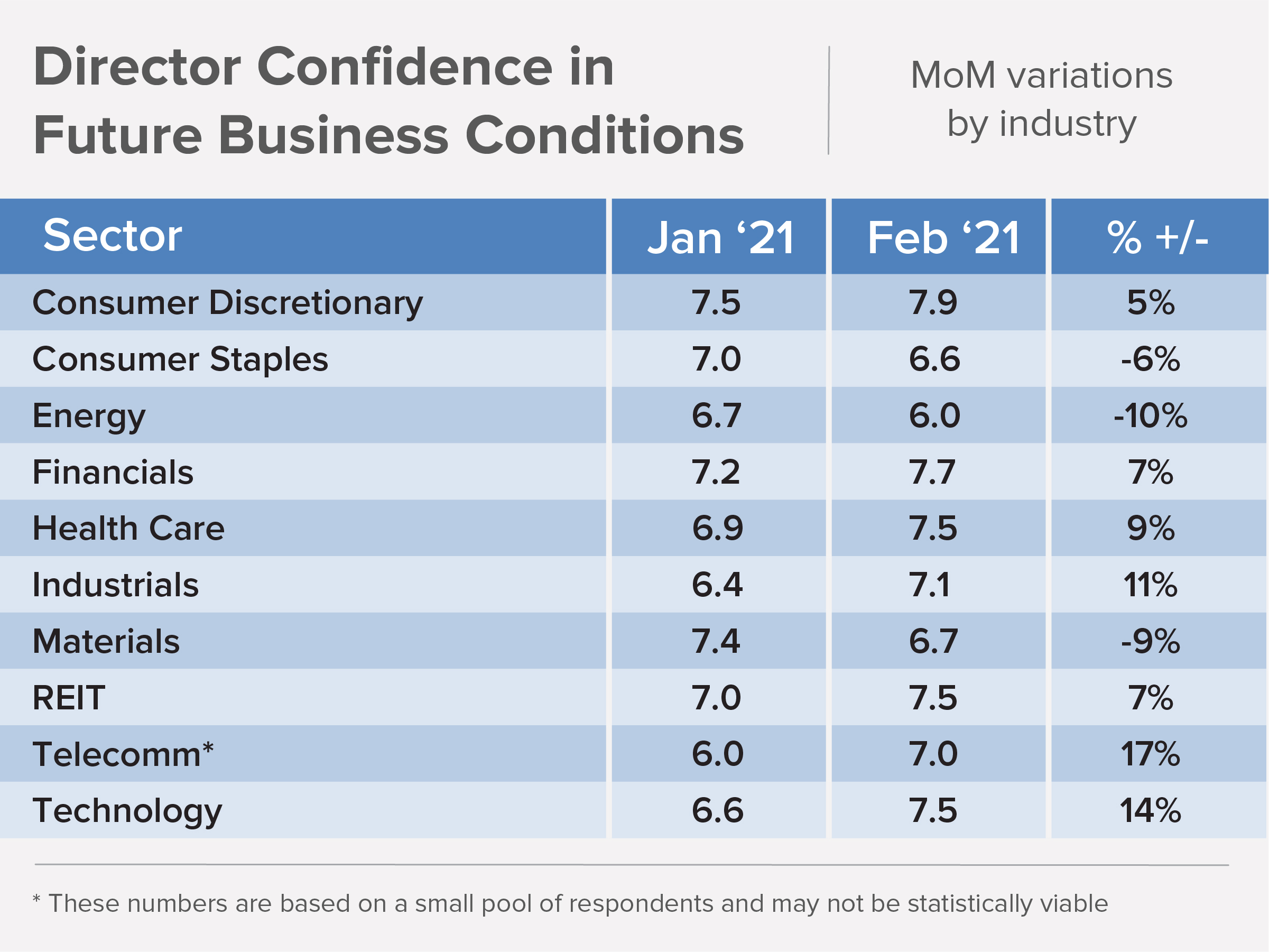 More CEOs are speaking out on political and social issues than ever before, but directors are worried about the potential impacts; boardroom fears about reputation are growing.

With the numbers of CEOs taking to the podium to speak on issues unrelated to corporate performance doubling in recent years, directors say they are increasingly concerned with having to monitor reputational risk among key stakeholders.

In the poll, 54 percent of directors said their CEO had made a public statement to address social or political events occurring in 2020—more than double the rate we found four years ago.

In September 2017, Corporate Board Member surveyed nearly 500 public company directors and found only a quarter of board members saying their CEO had issued a public statement on matters of politics or a social issue.

The numbers reflect the tumultuous year we just traveled though, a year in which many CEOs felt compelled to speak out—especially in the wake of George Floyd’s murder. But even if there is a growing desire among many consumers—especially younger ones— for corporate leaders to speak out, directors are not enthusiastic about the idea. Only 16 percent of directors we surveyed said they’d encourage their CEO to speak publicly “on any issue he or she deems appropriate.”

Still, a full 42 percent said they would encourage the CEO to speak out, but only “to the extent that the issue relates to the company’s mission or values”.

Some 32 percent said CEOs should remain silent on social issues because “companies represent all stakeholders and should therefore remain neutral on these issues,” and 15 percent didn’t want the CEO speaking out because of the potential for harming the company’s reputation. 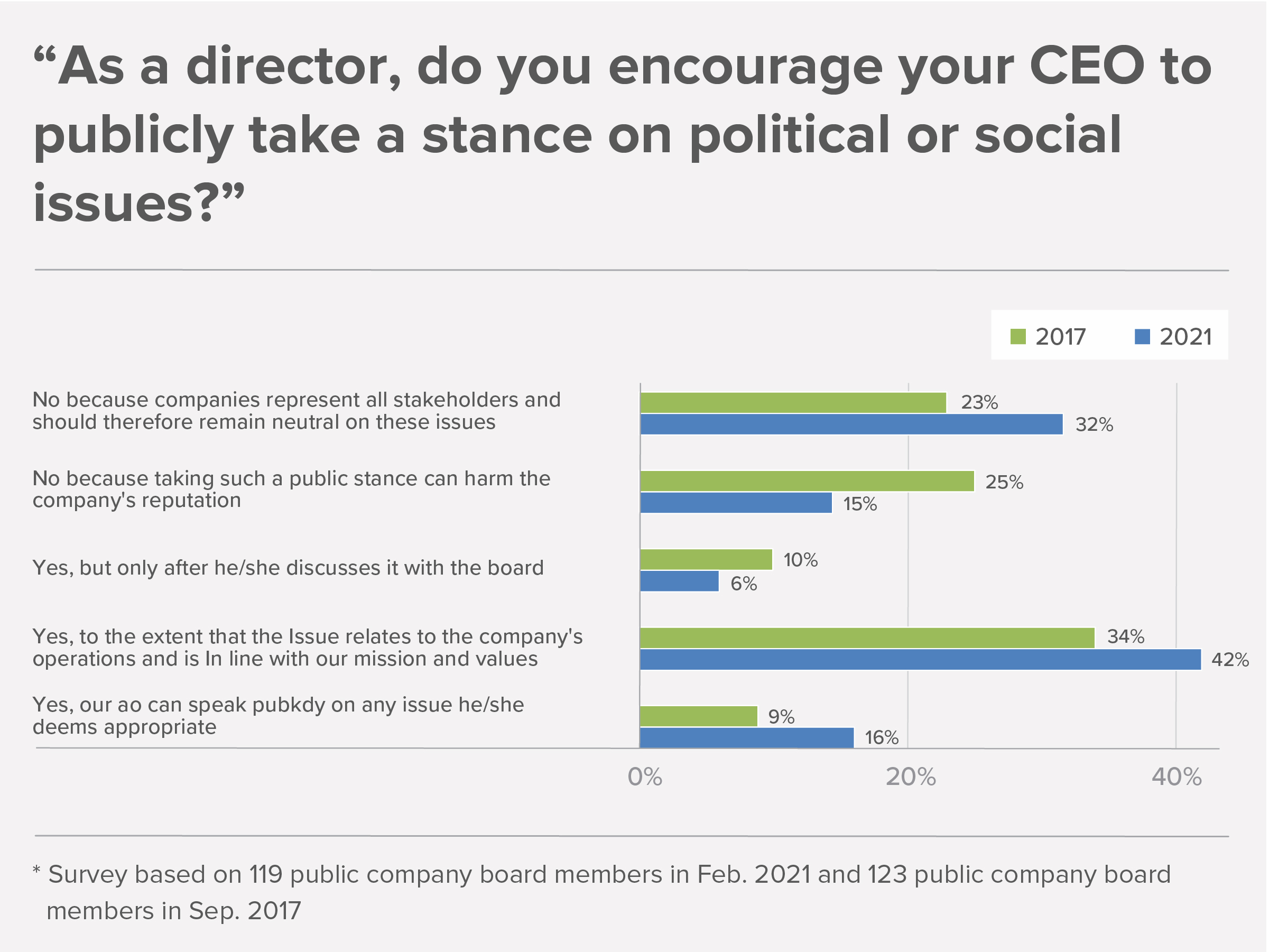 As you’d expect, the proportion of directors tracking CEO statements has grown sharply over the past four years. In 2017, 20 percent of those we polled were unaware whether their CEO had taken a public stance on a social or political issue—compared to just 5 percent today.

“Controversial or political statements, unless in line with the company’s mission, should be held to a minimum,” said William Dawson, a director on the board of California-based B2B rental company McGrath RentCorp., echoing the sentiments of many of the directors we surveyed.

Those numbers come amid a surging focus among directors on protecting the company’s reputation—no surprise, given the politically divisive and turbulent period, as well as the rising influence of social media, proxy advisory firms and the growing demands of institutional investors — especially on ESG issues.

Overall, 57 percent of directors we surveyed say they are more concerned about reputational risk today than they had been in prior years. When asked how closely they monitor the company’s reputation, directors on average ranked it an 8 out of 10 on our 10-point scale, or “very closely” according to our 2021 survey scale.

“Greater attention from institutional shareholders has the board’s attention,” says Gary LeDonne, director at MVB Financial Corp. and executive in residence at West Virginia University College of Business and Economics.

“The stakeholders are watching closely how we cope with the pandemic and deliver on business objectives,” said the lead director of a consumer discretionary company.

The lead director of a REIT said this can also be attributed to the fact that the “role of ISS and Glass Lewis and activist shareholders has grown significantly,” which can help explain why, in his view, the board’s attention to these matters is now significantly greater.