As pressure increases for companies to take action on ESG, the question remains: How well-aligned is the board to environmental and social goals? In collaboration with the Esade Centre for Corporate Governance, the Diligent Institute set out to learn more about how board effectiveness is related to progress on Environmental and Social (E&S) goals. In our analysis, we sought to answer the following questions:

This report was originally published by our research partner, Esade Centre for Corporate Governance, in Spanish. It is an abridged and translated version of the original piece, which was published in April 2022.

We analysed 5,295 public companies in Australia, Japan, the European Union (E.U.), the United States (U.S.), Canada and the United Kingdom (U.K.). Fifty percent of the companies analysed are headquartered in the United States. Thirteen board effectiveness metrics collected from company reports and public filings by Diligent Compensation and Governance Intel were used. These practices include:

This set of 13 metrics are applied as the fundamentals to determine correlation with the E&S scores of surveyed companies using data from Refinitiv. Additionally, eight areas of expertise of board members and their degree of association with E&S scores are analysed, including:

Refinitiv ESG Scores transparently and objectively measure ESG performance, engagement and effectiveness, based on public information. It collects and calculates more than 450 ESG measures at the company level, of which a subset of 186 of the most relevant and comparable measures according to the industry are used in the evaluation and scoring process of each company. These measures are grouped into 10 main categories that constitute the score for each of the three pillars and the final ESG score. A graphic description of the ESG evaluation and scoring process is detailed below. 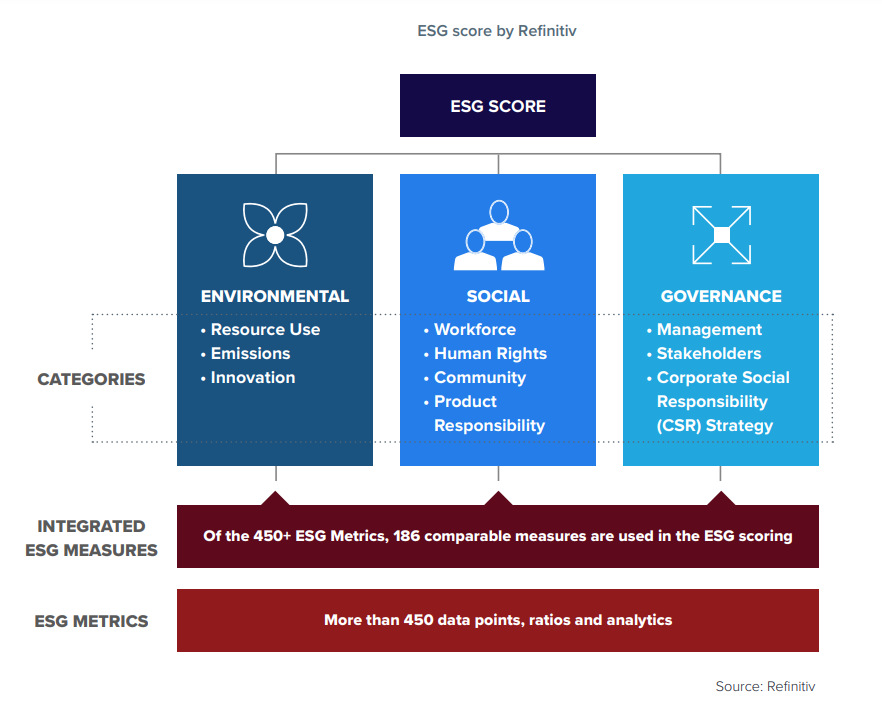 ESG performance: 40% of the companies in our sample are rated with a “C” score . This implies a satisfactory ESG performance and a moderate degree of transparency in the reporting of non-financial information, according to the Refinitiv workspace.

Board diversity: Among the board effectiveness metrics, board diversity has the strongest correlation with E&S scores. On average, companies with gender equality are associated with better E&S scores (the correlation score between these two variables equals 0.29).

When looking at companies’ E&S scores, we wanted to know whether results would differ significantly based on what country the company was headquartered in. On average, we find that French companies have the highest E&S score (74.27), which is more than double the score of companies in the United States (U.S.). French companies are followed by Spanish companies, with an average E&S score of 69.41 points, and Italian companies, scoring 65.15 points. We also find that listed companies from civil law origin countries have a relatively higher ESG score compared to the Anglo-Saxon listed companies. 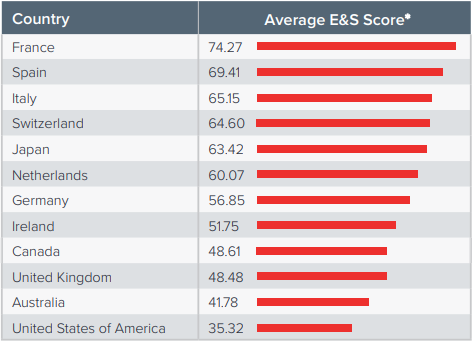 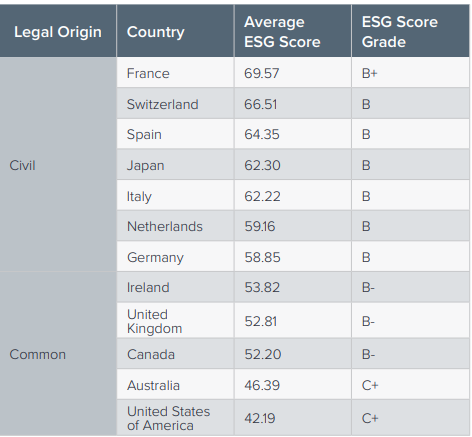 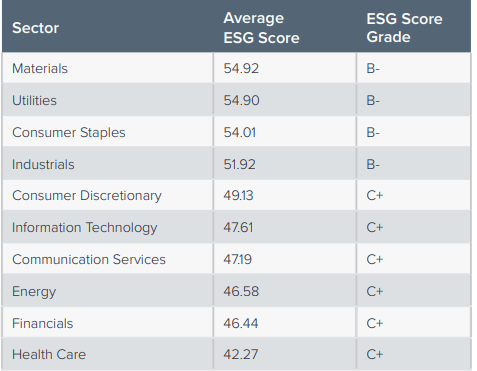 To learn more about how board composition could be influencing progress on E&S metrics, we studied the correlation between different factors of board effectiveness and the scores on E&S metrics. The graph below shows how each of the board effectiveness practices correlates with overall E&S performance and in each of the E and S pillars. Having higher gender parity shows a stronger correlation to better E&S performance in each of the E and S pillars. Similarly, greater diversity in terms of director age is also related to better E&S performance.

Meanwhile, having a board with a greater proportion of local directors, who are therefore less diverse in terms of nationality, is correlated with lower E&S performance and in each of the separate pillars. Counterintuitively, a larger number of independent directors is not associated with better E&S performance or in the social pillar, but it is related to worse environmental performance. 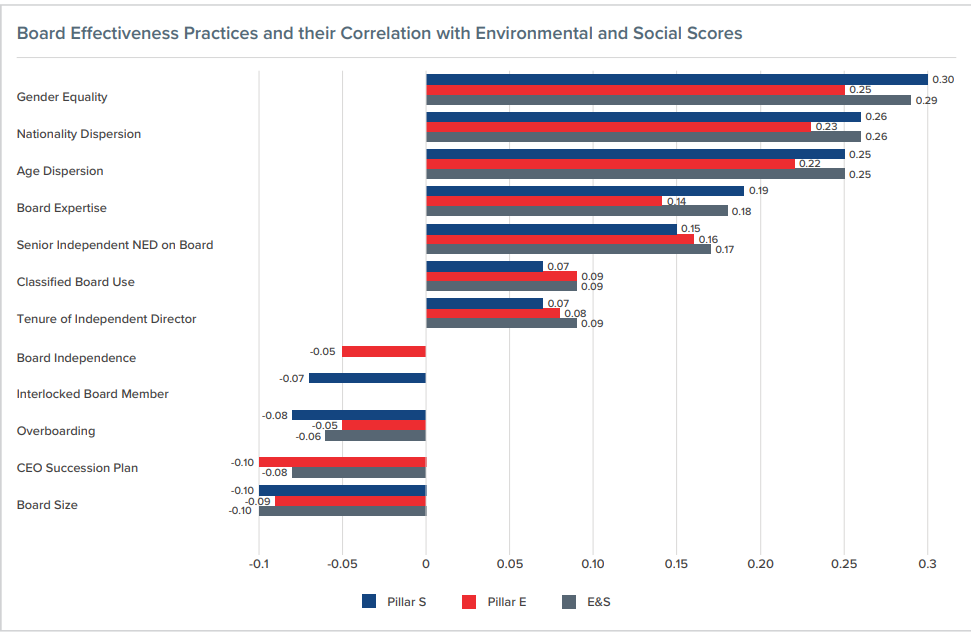 Similarly, we also wanted to learn whether having directors with certain expertise types present on the board influenced how that company performed on E&S metrics. The graph below shows the degree of correlation between the percentage of board members with expertise in each of the different areas and performance in E&S metrics and in each of the E&S pillars. The graph shows that all areas of expertise are positively correlated to E&S performance, except for the industry and sector category. Therefore, having a higher percentage of board members in any of the other seven areas of expertise is associated with better E&S performance and better performance in any of the E&S pillars. 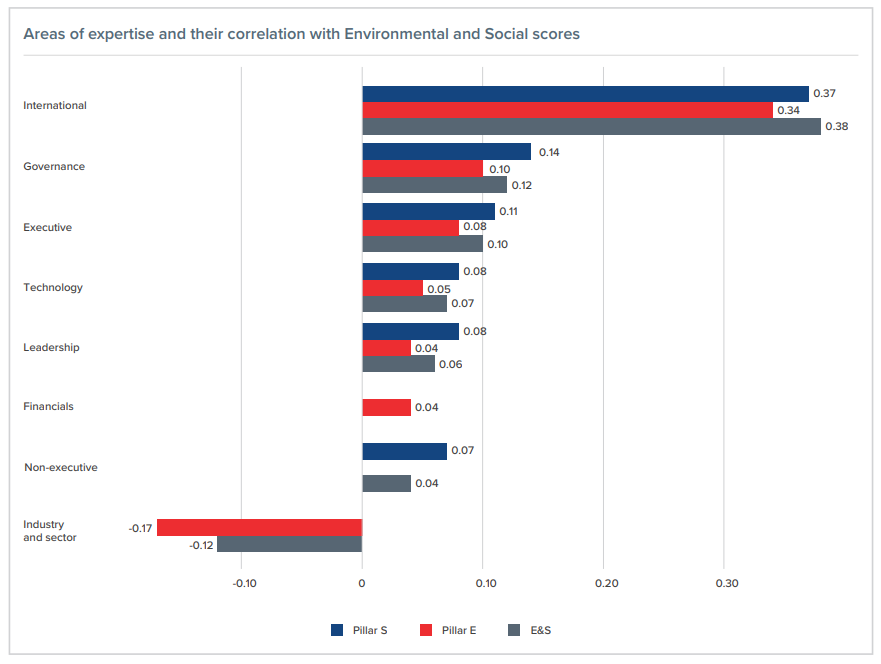 How important is the Sustainability Committee for E&S issues? 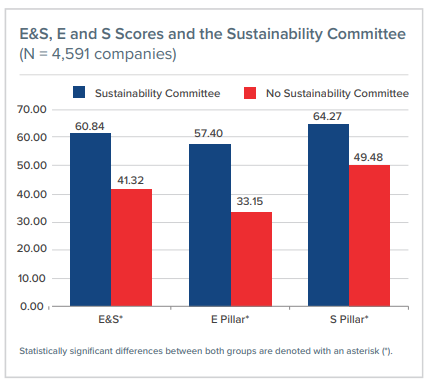 Conclusion: Board Diversity is positively correlated with environmental and social performance (E&S)

The results of the study show that diversity on boards, including with respect to gender, nationality, age, and professional expertise or experience, have a high degree of positive correlation with environmental and social performance. Out of all the areas of diversity analysed, gender diversity stands out the most. Boards with higher levels of female representation are also more likely to have all eight of our expertise categories represented, reinforcing the idea that when companies diversify their boards along gender lines, they are also likely to bring in new and different skill sets, and vice versa, diversifying the board along more than one dimension with a single hire.

Previous research has shown that board diversity adds value and leads to better financial, environmental and social performance for companies. Additionally, more diverse boards also demonstrate a greater concern with and position in addressing social inequalities, which are closely related to the environmental, social and governance (ESG) pillars. Based on our results, it is likely that having more diverse boards gives an organisation the perspectives and skills needed to achieve E&S goals. In addition to ensuring diverse perspectives are present in the boardroom, understanding ESG and having proper oversight are key. A few years ago, when technology and cybersecurity first became top issue areas in the boardroom, research showed that merely adding one or two directors with technology expertise did not materially change the board’s ability to understand and oversee cybersecurity and cyber risk, and it wasn’t until at least three directors had a foundational understanding of trends around cybersecurity and digital innovation that progress was made. Similarly, when it comes to ESG, regardless of background or current expertise, all directors should be engaging in upskilling around ESG through education and keeping up on current developments.