The inaugural Director Confidence Index, conducted in collaboration between Corporate Board Member and Diligent Institute prior to the public release of the President’s Covid-19 diagnosis, finds cautious optimism for the future of the U.S. economy—with caveats.

In a time of great risk and uncertainty for the country, America’s boardrooms are concerned about the U.S. economy overall but also optimistic about the future, a new survey finds, with a clear majority of corporate directors predicting growth in corporate revenues, profits and cash over the next year.

But that optimism hinges, according to many of those surveyed, on the widespread distribution of a vaccine for Covid-19.

Meanwhile, directors—even more than the general public—are deeply divided on their hopes for the presidential election, with 47% saying the election of Joe Biden would be beneficial to their company versus 49% for Donald Trump. Yet, boardrooms appear to be doing surprisingly little scenario planning for either outcome right now—or no outcome at all. 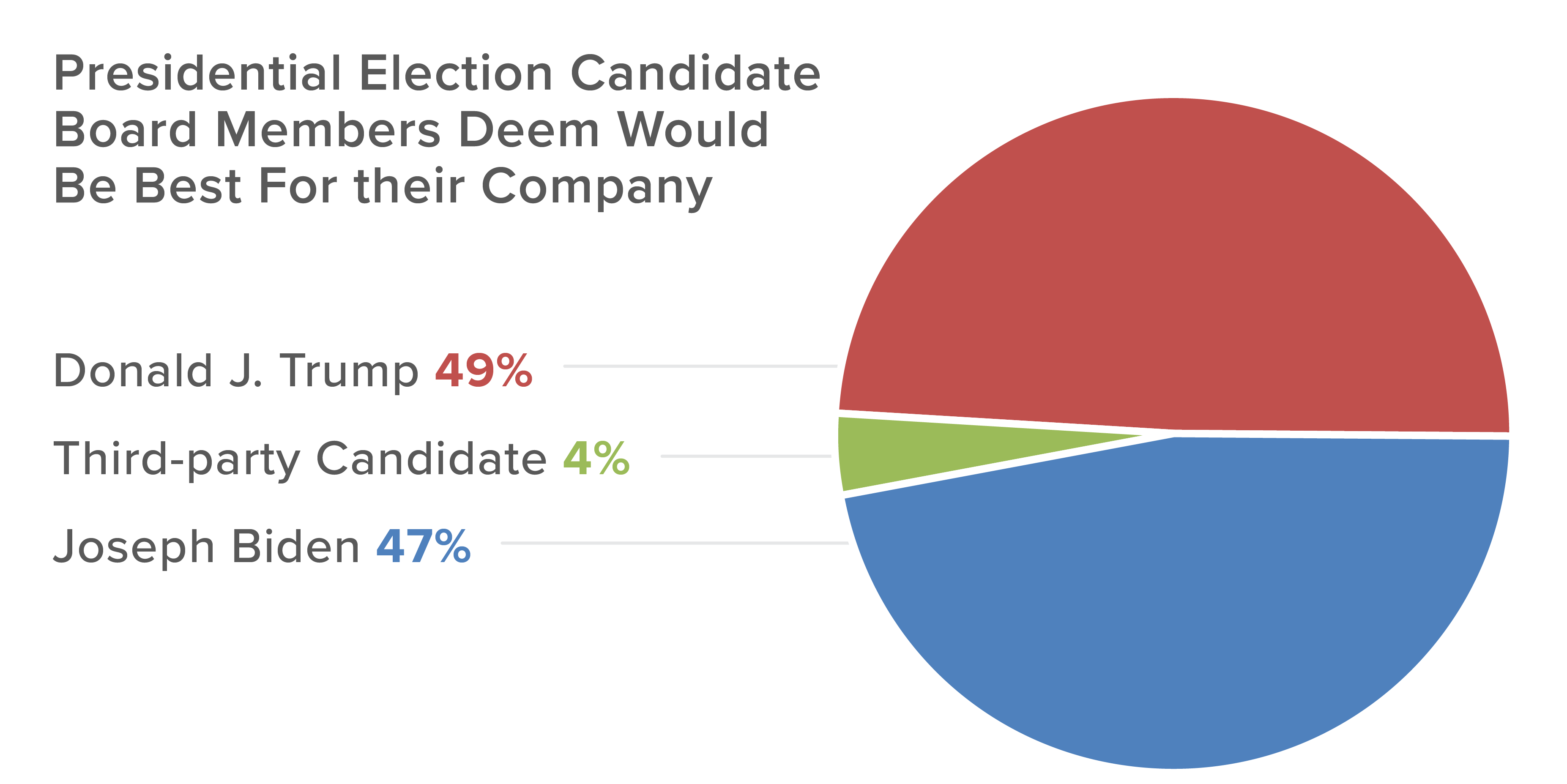 Those are the key findings from the inaugural Director Confidence Index, conducted in collaboration between Corporate Board Member and Diligent Institute. The survey of 121 corporate directors at U.S. public companies, conducted September 29 to October 1—prior to the release of President Trump’s Covid-19 diagnosis—shows director sentiment in the current economy at a 5.2 on ten-point scale.

When asked about their outlook for the economy 12 months from now, directors give it a ranking of 6.6 out of 10. In contrast, CEOs surveyed by our sister publication, Chief Executive, rate their confidence in the current economy 9 percent higher, at 5.7/10 and 6.9/10 for conditions a year from now.

Many directors seem to agree with CEOs that a widely distributed Covid-19 vaccine in the near future will drive the recovery. Elizabeth Nickels, non-executive director and audit committee member at Michigan-based food distributor and grocery store retailer SpartanNash Company, says she is “hoping vaccination/new treatment methods will get people traveling again, going out to eat and participating in other entertainment and recreational activities.”

Among those who adopted a more bearish perspective, the lingering effects of the pandemic on the economy and the political turmoil and election in-fighting are the main factors behind their cautionary stance. “Small business destruction, high unemployment, high debt loads,” listed Brad Oates, chairman of NY-based financial holding company CIT Group when asked to explain his rating of 5 out of 10. “The economy is likely to be very weak for multiple years,” he says.

When asked about the prospects for the businesses which they help govern, some 60% of public company board members surveyed said they are expecting profits and revenues to increase over the next 12 months. Only about a quarter of them project decreases.

A majority—55%—expect cash reserves to increase and debt to remain flat (53%). Regardless, directors signaled a low tolerance for big projects or investments among their firms. Just 27% of those surveyed say their companies are planning to increase capital expenditures in the near future (about the same percentage predict cuts to Capex), while 46% said their company’s spending will remain unchanged.

The impact of Covid-19 has varied considerably by sector, and this is reflected in our Q3 Index when looking at confidence levels and optimism across industries. For instance, the Index shows directors of Media and Health Care Services companies having the least confidence in the current business environment, rating it a 4 out of 10—indicative of “weak” according to our 1-10 scale. At the other end of the scale, directors who serve on the board of companies operating within the Utilities and Consumer Durables sectors are among the most confident, rating current business conditions as “good” at 6.3/10.

Similarly, when looking at directors’ outlook for the next 12 months, the Index also finds Media and Health Care Services companies among the most pessimistic, rating the 2021 environment a 5.7 and 5.8 out of 10, respectively.

In contrast, Consumer Durables directors are among the most optimistic, with a rating of 8.2/10, or “very good”. As one director put it: “The economy has been surprisingly resilient outside of a few sectors. I expect we will have a vaccine and spending will increase.” 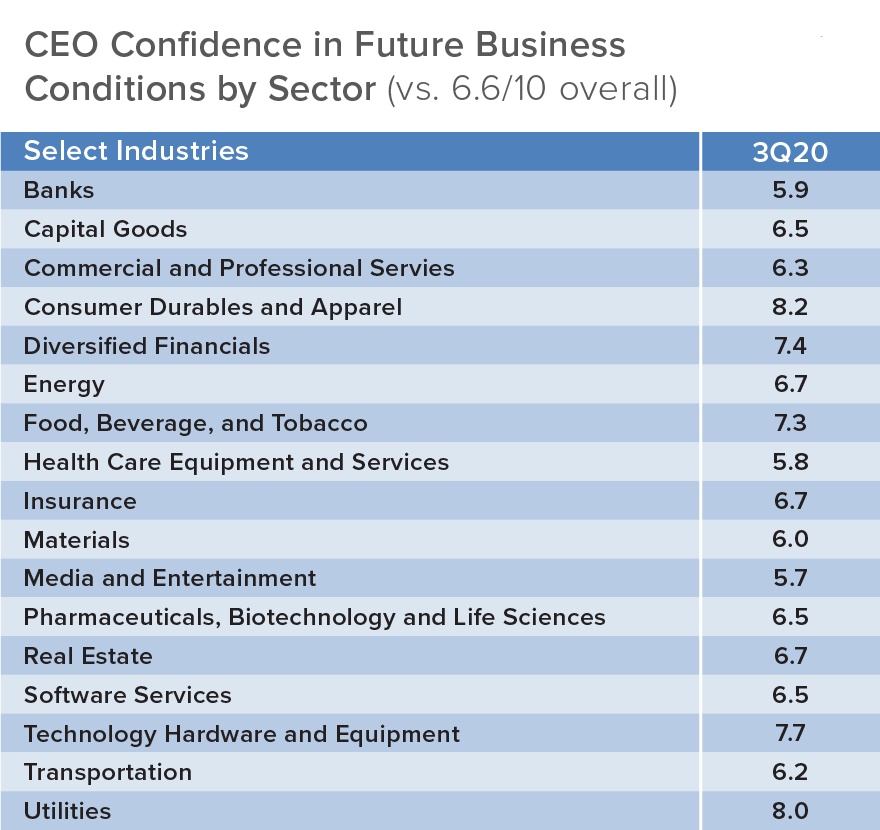 The sentiment was echoed by other industry peers. “With the exception of travel & hospitality industries, most of our customers are recovering,” said another director from the Consumer Staples sector.

As for the election, no matter what the outcome, boards seem to be ready to take it in stride. Fewer than 10% have created any kind of concrete plan for outcomes such as an outright Biden or Trump win, and much less in the event of a contested election. About the same number say they have thought through what will happen if there is any kind of civic unrest in the wake of the election results. Still, a fair number of boards—40%—have at least discussed what a Biden or Trump win would mean for their businesses, and 36% have discussed what they would do in the face of civic unrest.